Crucifixion is a method of punishment or capital punishment in which the victim is tied or nailed to a large wooden beam and left to hang perhaps for several days, until eventual death from exhaustion and asphyxiation. It was used as a punishment by the Romans. Crucifixion has been used in parts of the world as recently as the twentieth century. The crucifixion of Jesus is central to Christianity, and the cross (sometimes depicting Jesus nailed to it) is the main religious symbol for many Christian churches.

Ancient Greek has two verbs for crucify: (), from (which in today's Greek only means "cross" but which in antiquity was used of any kind of wooden pole, pointed or blunt, bare or with attachments) and () "crucify on a plank", together with ( "impale"). In earlier pre-Roman Greek texts usually means "impale". New Testament Greek uses four verbs, three of them based upon (), usually translated "cross". The most common term is (), "to crucify", occurring 46 times; (), "to crucify with" or "alongside" occurs five times, while (), "to crucify again" occurs only once at the Epistle to the Hebrews 6:6. (), "to fix or fasten to, impale, crucify" occurs only once at the Acts of the Apostles 2:23. The English term cross derives from the Latin word , which classically referred to a tree or any construction of wood used to hang criminals as a form of execution. The term later came to refer specifically to a cross. The English term crucifix derives from the Latin or , past participle passive of or , meaning "to crucify" or "to fasten to a cross". 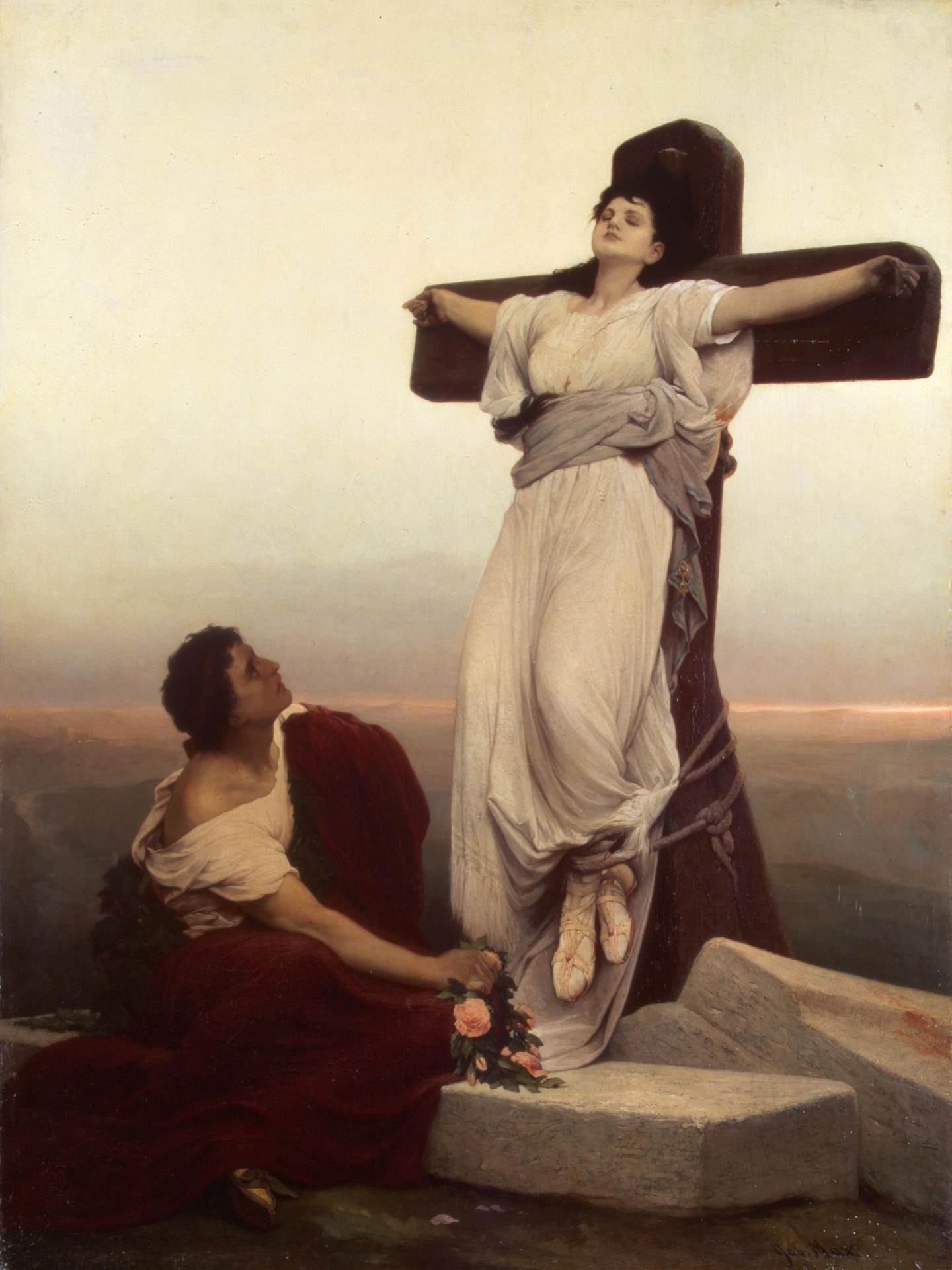 Crucifixion was most often performed to dissuade its witnesses from perpetrating similar (usually particularly heinous) crimes. Victims were sometimes left on display after death as a warning to any other potential criminals. Crucifixion was usually intended to provide a death that was particularly slow, painful (hence the term ''excruciating'', literally "out of crucifying"), gruesome, humiliating, and public, using whatever means were most expedient for that goal. Crucifixion methods varied considerably with location and time period. The Greek and Latin words corresponding to "crucifixion" applied to many different forms of painful execution, including being impaled on a stake, or affixed to a tree, upright pole (a crux simplex), or (most famous now) to a combination of an upright (in Latin, ''stipes'') and a crossbeam (in Latin, ''patibulum''). Seneca the Younger wrote: "I see crosses there, not just of one kind but made in many different ways: some have their victims with head down to the ground; some impale their private parts; others stretch out their arms on the gibbet". In some cases, the condemned was forced to carry the crossbeam to the place of execution. A whole cross would weigh well over 135 kg (300 lb), but the crossbeam would not be as burdensome, weighing around 45 kg (100 lb). The Roman historian Tacitus records that the city of Rome had a specific place for carrying out executions, situated outside the Esquiline Gate, and had a specific area reserved for the execution of slaves by crucifixion. Upright posts would presumably be fixed permanently in that place, and the crossbeam, with the condemned person perhaps already nailed to it, would then be attached to the post. The person executed may have been attached to the cross by rope, though nails and other sharp materials are mentioned in a passage by the Judean historian Josephus, where he states that at the Siege of Jerusalem (70), "the soldiers out of rage and hatred, ''nailed'' those they caught, one after one way, and another after another, to the crosses, by way of jest". Objects used in the crucifixion of criminals, such as nails, were sought as amulets with perceived medicinal qualities. While a crucifixion was an execution, it was also a humiliation, by making the condemned as vulnerable as possible. Although artists have traditionally depicted the figure on a cross with a loin cloth or a covering of the genitals, the person being crucified was usually stripped naked. Writings by Seneca the Younger state some victims suffered a stick forced upwards through their groin. Despite its frequent use by the Romans, the horrors of crucifixion did not escape criticism by some eminent Roman orators. Cicero, for example, described crucifixion as "a most cruel and disgusting punishment", and suggested that "the very mention of the cross should be far removed not only from a Roman citizen's body, but from his mind, his eyes, his ears". Elsewhere he says, "It is a crime to bind a Roman citizen; to scourge him is a wickedness; to put him to death is almost parricide. What shall I say of crucifying him? So guilty an action cannot by any possibility be adequately expressed by any name bad enough for it." Frequently, the legs of the person executed were broken or shattered with an iron club, an act called ''crurifragium'', which was also frequently applied without crucifixion to slaves. This act hastened the death of the person but was also meant to deter those who observed the crucifixion from committing offenses.

The gibbet on which crucifixion was carried out could be of many shapes. Josephus says that the Roman soldiers who crucified the many prisoners taken during the Siege of Jerusalem under Titus diverted themselves by nailing them to the crosses in different ways;