An aviary is a large enclosure for confining birds. Unlike birdcages, aviaries allow birds a larger living space where they can fly; hence, aviaries are also sometimes known as flight cages. Aviaries often contain plants and shrubbery to simulate a natural environment. 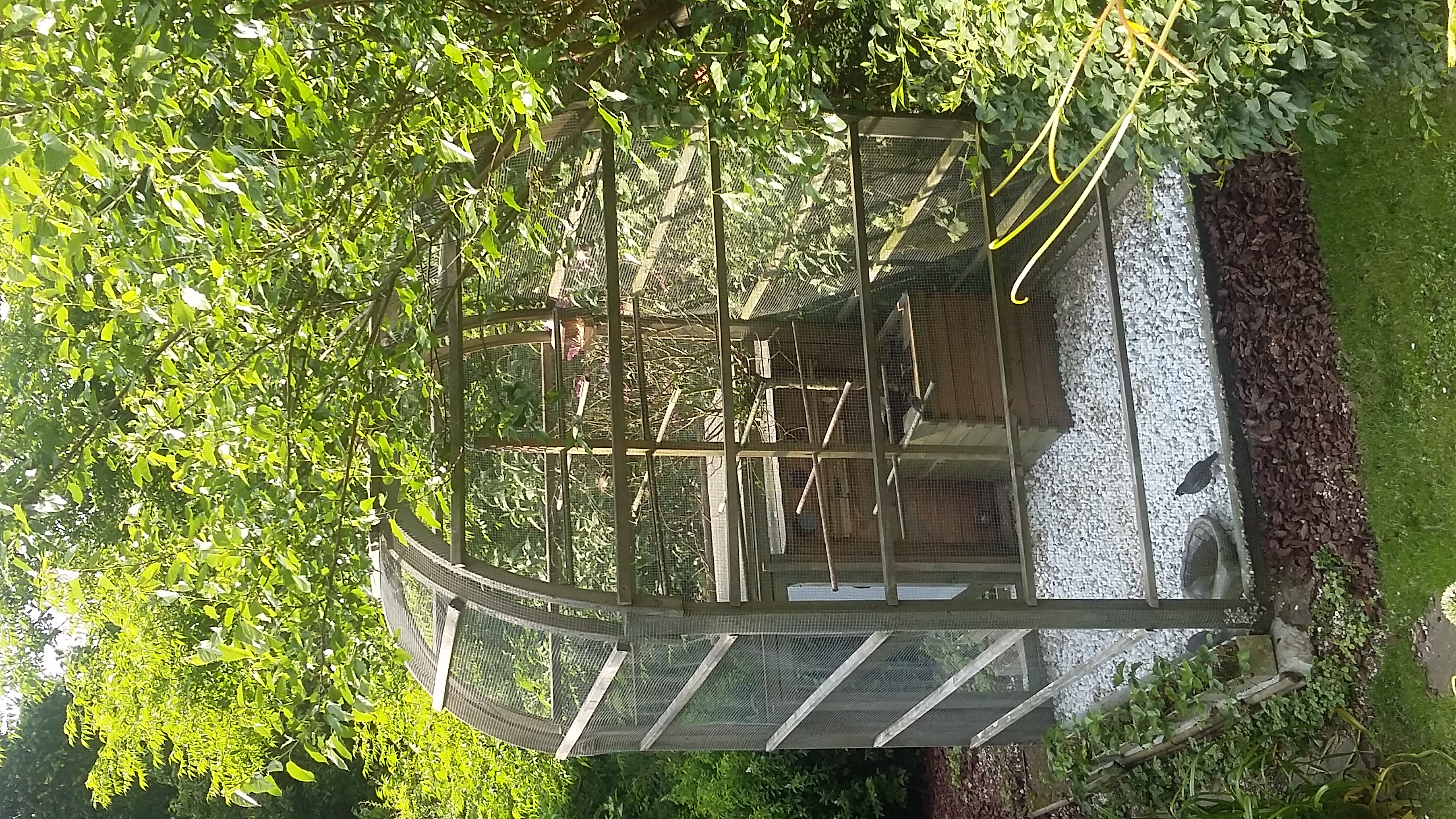 Large aviaries are often found in the setting of a zoological garden (for example, the London Zoo, the National Zoo in Washington, D.C., and the San Diego Zoo). Walk-in aviaries also exist in bird parks, including the spacious Jurong BirdPark in Singapore, or the smaller Edward Youde Aviary in Hong Kong. Pittsburgh is home to the USA's National Aviary, perhaps the most prominent example in North America of an aviary not set inside a zoo. However, the oldest public aviary not set inside a zoo in North America, the Hamilton Aviary is located in Hamilton, Ontario, Canada. Tracy Aviary is an example of a bird park within a public urban park, Liberty Park in Salt Lake City, Utah. Some smaller sized aviaries can often be found in European manorial gardens, such as Waddesdon Manor, UK, and Versailles, France. Some public aquaria, such as the Oregon Coast Aquarium, Newport, Oregon, or the Monterey Bay Aquarium, have aquatic aviaries. Home aviaries are popular with some bird fanciers who have the space for them. Many bird breeders list themselves as "aviaries", since most bird pairs breed best in aviaries in contrast to breeding ''cages''. Home aviaries may be built by the owner or obtained from a commercial supplier. There are two main subcategories of home aviaries: grounded aviaries and suspended aviaries. Grounded aviaries are affixed to the ground with a concrete base to prevent rats and other vermin from entering. Suspended aviaries are suspended in the air with only the 'legs' of the aviaries affixed to the ground; hence, the need for a protective base is eliminated in suspended aviaries. Most grounded aviaries typically feature a woodwork or PVC frame unlike the metal frame of public aviaries; however, it isn't uncommon for suspended aviaries to feature a metal frame. Aviaries are also used for research purposes in ornithology institutes

An aviary, a large cage to house and display birds, dates as far back and possibly earlier than the 1500s found in the Aztec city of Tenochtitlan as noted by Hernan Cortes when he and his men arrived in 1521. Also the ''Raven Cage'' (created in 1829), is regarded as one of the oldest structures in the London Zoo.

The first large aviary inside a zoological garden was established in 1880 in the setting of the Rotterdam Zoo. Aviaries were an important aspect for the many Rothschild houses that proliferated across Europe in the 19th century. This was a recalling of the aristocratic custom from the late 1600s, which involved the elite society displaying their power, status and wealth through the exhibition of exotic birds and animals. For instance, Baron Ferdinand de Rothschild built his aviary in 1889 at Waddesdon Manor, UK, erected in the style of Versailles' trelliswork pavilions.

In 1902, a flying cage was completed in the setting of the National Zoological Park of the Smithsonian Institution. A new ''Great Flying Cage'' was built in 1964. The Saint Louis Zoo is home to the 1904 World's Fair Flight Cage. It is one of only two permanent structures built for the World's Fair which still remain (the other is the Saint Louis Art Museum's Cass Gilbert building). In 1904, it was the largest bird cage ever built. It remains one of the world's largest free-flight aviaries. The long, wide, and high cage was built by the Smithsonian Institution specifically for the St. Louis World's Fair. Local pride in the giant cage motivated St. Louis to finally establish a zoo in 1910. In 1937, the San Diego Zoo's aviary designed by architect Louis John Gill opened; it was then the largest in the world. The mammoth steel structure, long, wide and more than high, funded by the Works Progress Administration at a cost of $50,000, had no beams, cross or guy-wires to impede the flight of the birds. With the Antwerp cage system (1948), birds are only separate from public with a light system used indoor the ''Bird Building'' at Antwerp Zoo. At the Frankfurt Zoo, the bird house was built in 1969. Its ''Bird Halls'' presented birds for the first time in large glassed miniature habitats. In diving exhibits, darters and kingfishers could be seen hunting under water, and in the free-flight hall visitors still walk amongst tropical birds in dense vegetation. In 1963, the same principle was used outdoors to construct the ''Bird Thicket'', ten aviaries surrounded by dense bushes and designed in various habitat settings, which visitors can enter through wire netted doors and curtains of cords. The ''Snowdon Aviary'' in London Zoo was designed by Antony Armstrong-Jones, 1st Earl of Snowdon, Cedric Price and Frank Newby, and built in 1962–1964. The Bronx Zoo's ''World of Birds'', a two-story bird house completed in 1972, is a huge, landscaped, indoor free-flight exhibit. The one-way flow pattern in the exhibit moves the visitors through twenty-five birds habitats, ranging from desert to tropical forest. Each setting recreates with impressive fidelity the microculture of the birds that fly merrily about within their diorama world, complete with living plants. Five of the aviaries are completely open: in two of the largest the uncaged public walks through the habitat with birds freely overhead. The Henry Doorly Zoo's ''Simmons Aviary'' opened in 1983 and is one of the world's largest free-flight aviaries. About 500 birds from all parts of the world occupy the area of the aviary. In this exhibit, visitors see flamingos, ducks, swans, storks, cranes, spoonbills, ibis and egrets. The Aviary is long and rises to at the center. The structure of two-inch nylon mesh is supported by a system of cables and poles. The use of nylon instead of wire is a unique concept.