Worthington is a city in Franklin County, Ohio, United States, and is a northern suburb of the larger Columbus. The population was 13,575 at the 2010 census. The city was founded in 1803 by the Scioto Company led by James Kilbourne, who was later elected to the United States House of Representatives, and named in honor of Thomas Worthington, who later became governor of Ohio.

On May 5, 1802 a group of prospective settlers founded the Scioto Company at the home of Rev. Eber B. Clark in Granby, Connecticut for the purpose of forming a settlement between the Muskingum River and Great Miami River in the Ohio Country. James Kilbourne was elected president and Josiah Topping secretary (McCormick 1998:7). On August 30, 1802 James Kilbourne and Nathaniel Little arrived at Colonel Thomas Worthington's home in Chillicothe, Ohio. They tentatively reserved land along the Scioto River on the Pickaway Plains for their new settlement (McCormick 1998:17). On October 5, 1802, the Scioto Company met in Granby, Connecticut and decided not to purchase the lands along the Scioto River on the Pickaway Plains, but rather to buy land farther north from Dr. Jonas Stanbery and his partner, an American Revolutionary War general, Jonathan Dayton. Sixteen thousand acres (65 km) were purchased along the Whetstone River (now known as the Olentangy River) at $1.50 per acre (McCormick 1998:19-27). This land was part of the United States Military District surveyed by Israel Ludlow in 1797 and divided into townships square.

On May 7, 1803 James Kilbourne arrived at what is now Worthington to inspect the Scioto Company's purchase. A work party of seven hired laborers, paid $12 per month each, soon began work clearing the forest (McCormick 1998:29). On August 10, 1803 the Scioto Company voted to name the village for Thomas Worthington, one of Ohio's first two senators, and for each member to contribute $2 (about four days wages) to support a library. In September 1803 the first settlers departed Connecticut by horse. Ezra Griswold was the lone settler who traveled by oxcart. With this he is officially the first settler of Worthington, beating his fellow Company men to the site. By December 1803, Worthington was divided into 160, three quarter acre city lots with a public green in the center of the village. Thirty seven persons bid between $53 and $0.25 to select a lot. Those who bid nothing were given a choice of the remaining lots. Farm lots, ranging from 20 to and averaging , were sold off in the same way. Both the Episcopal Church and Worthington Academy were given an farm lot and wood lot to provide financial support.

Dissolution of the Company

By August 11, 1804 the plat maps were completed, payments or notes promising payments collected and deeds prepared for all sixteen thousand acres (65 km) of the Scioto Company's purchase (McCormick 1998:71). On January 28, 1805, having completed its work of apportioning land and establishing the church, school and library, the Scioto Company was dissolved (McCormick 1998:76).

On February 20, 1808 the Worthington Academy was incorporated by the Ohio legislature and a brick building was constructed facing the northeast quadrant of the public square. Its bell now adorns Kilbourne Middle School. That same year James Kilbourne erected a commercial building for a newspaper. This building still stands at 679-681 High Street as the oldest commercial building in continuous use in the state. In 1811, Ezra Griswold built a large south-facing brick tavern on the lot north of the northeast quadrant of the public square. That same year, the Orange Johnson house was constructed north of the Village Green.

During the War of 1812, several Worthington militia marched north with General William Hull's army and were surrendered at Detroit on August 12, 1812. Orders issued by General William Henry Harrison from "Northwest Army Headquarters, Worthington, Ohio" on October 28, 1812 indicate the commander, like his supply wagons, was using the road north from the capital. On September 7, 1814, Zophar Topping died while serving with Indian scouts. He was one of two Worthington casualties during the war along with Luther Palmer.

On May 24, 1813 James Kilbourne took a seat in the United States House of Representatives. On August 25, 1817 President James Monroe visited Worthington. Also in 1817, Philander Chase moved to Worthington to become the first rector of St. John's Episcopal Church. He concurrently served as rector of Episcopal churches in Columbus and Delaware and as principal of the Worthington Academy. In June 1818, Rev. Chase was elected Bishop of the newly organized Episcopal Diocese of Ohio. Chase initially founded Kenyon College in Worthington. The period from the 1820s to the Civil War was a time of slow growth for the sleepy village. In 1820, Aurora Buttles erected a Masonic hall. In 1826 the Columbus and Sandusky Turnpike was incorporated (now U.S. Route 23) to connect the center of the state to Lake Erie, further cementing the importance of High Street. 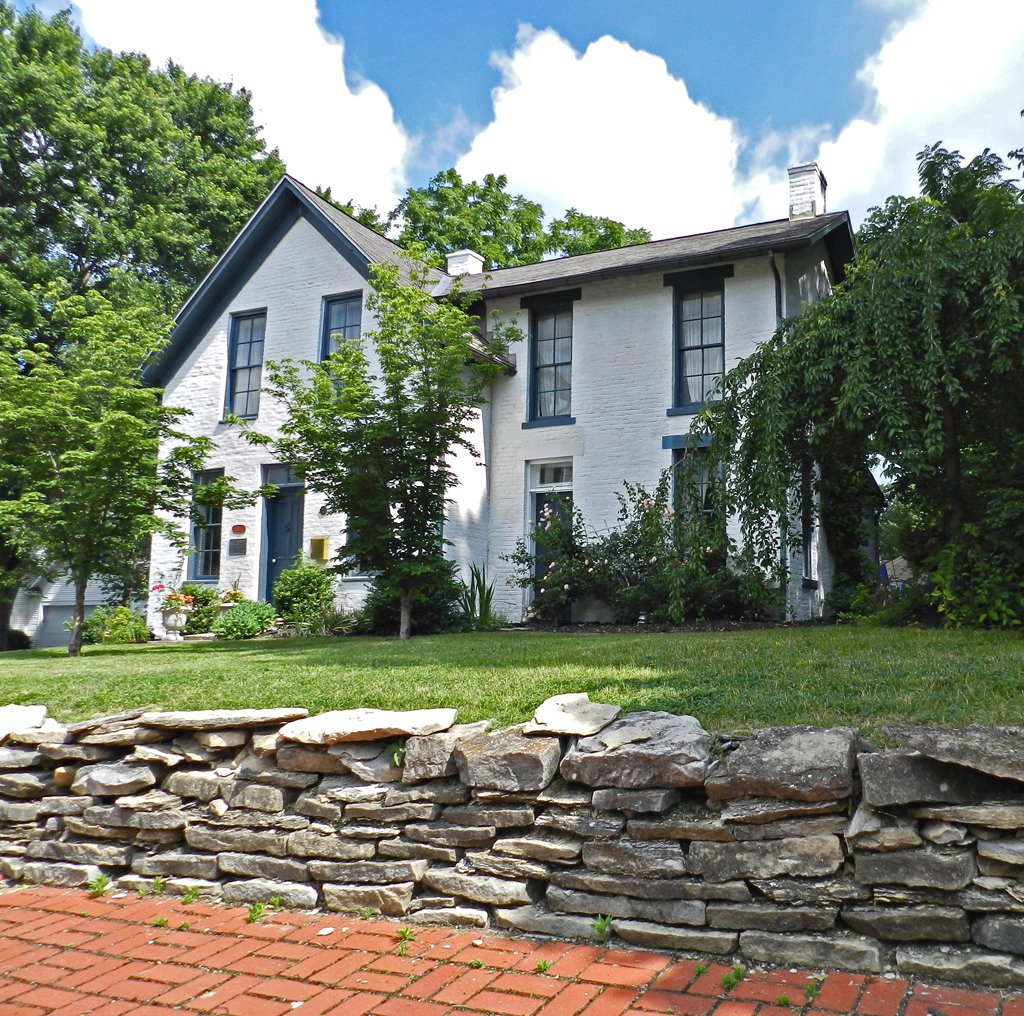 In September, 1861 Captain William Pinney and 14 members of the "Olentangy Reserves" mustered into Company E of Thomas Worthington Jr.'s 46th Ohio Volunteer Infantry, which trained at Camp Lyon on the old Worthington Manufacturing Co. site southwest of the village. This unit suffered forty percent casualties at the Battle of Shiloh in April 1862.

In 1866 the Bishop House was converted to the Union Hotel (Worthington Inn) by the Lewis family. In 1873 the Worthington School located at Evening Street and State Route 161 was completed. The first Worthington High School class graduated in 1880 (including 2 girls). In 1931, the only Roman Catholic pontifical college outside of Italy, the Pontifical College Josephinum relocated just north of Worthington where it exists today.

The Worthington Public Library serves the community with three branches. In 2015, the library loaned more than 3.2 million items to its 79,500 cardholders, making it one of the busiest libraries in Ohio. Total printed materials held are over 473,000 volumes with 20,000 print subscriptions.

Three freeways run through Worthington: I-270, I-71, and SR 315. The Ohio State University Airport is the nearest general aviation airport to the city, and passengers are served by Columbus's two airports: Port Columbus International Airport and Rickenbacker International Airport.

Worthington Schools operates public schools. Thomas Worthington High School and Worthington Kilbourne High School are the high schools of the city. The Linworth Alternative Program also operates within the city. The office of the Columbus Japanese Language School (コロンバス日本語補習校 ''Koronbasu Nihongo Hoshūkō''), a weekend supplementary Japanese school, is located in Worthington. The elementary classes are held at Granby Elementary School in Columbus and the junior high and high school classes are held at McCord Middle School in Columbus. Area Japanese parents opened the school in April 1980, and the school started with three teachers and fourteen elementary-level students. As of 2014 there are about 550 students. The Ohio Contemporary Chinese School (OCCS, ) is located in the area, holding classes at Worthington Kilbourne. It serves the Chinese American community.