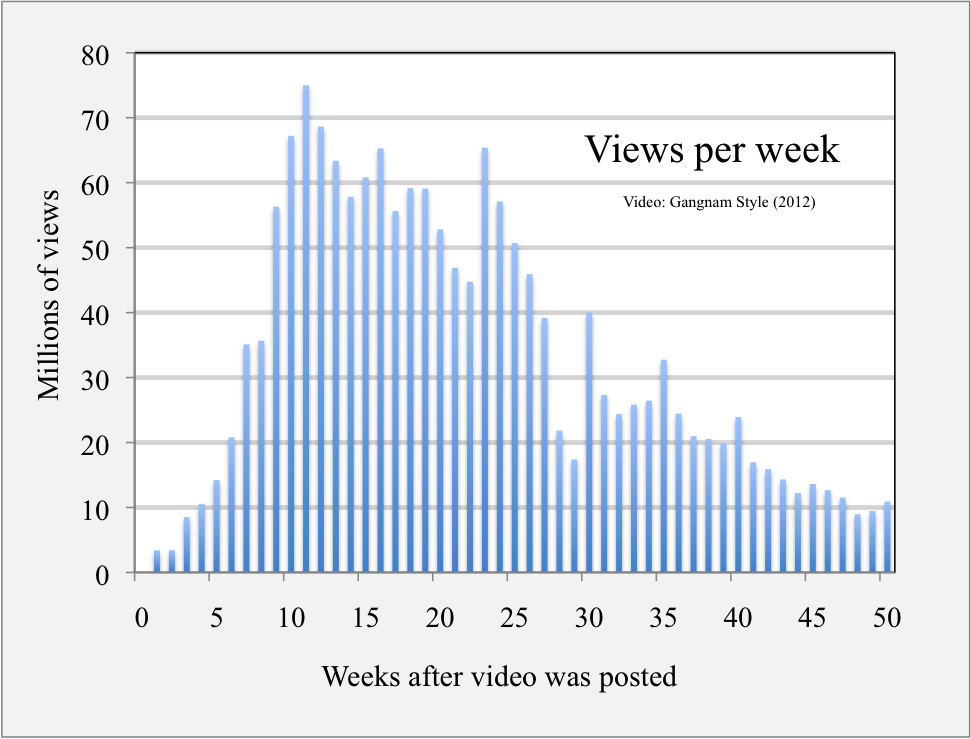 right | 300px | Cumulative video views, leading to a lower, but relatively stable, long-term growth rate by the end of the first year. A viral video is a video that becomes popular through a viral process of Internet sharing, typically through video sharing websites such as YouTube as well as social media and email. Viral videos may be serious, and some are deeply emotional, but many more are centered on entertainment and humorous content. They may include televised comedy sketches, such as ''The Lonely Island''s "Lazy Sunday" and "Dick in a Box", ''Numa Numa'' videos, The Evolution of Dance, Chocolate Rain on YouTube; and web-only productions such as I Got a Crush... on Obama. Some eyewitness events have also been caught on video and have "gone viral" such as the Battle at Kruger. One commentator called the Kony 2012 video the most viral video in history (about 34,000,000 views in three days and 100,000,000 views in six days), but "Gangnam Style" (2012) received one billion views in five months and was the most viewed video on YouTube from 2012 until "Despacito" (2017).

Videos were shared long before YouTube or even the Internet by word-of-mouth, film festivals, VHS tapes, and even to fill time gaps during the early days of cable. Perhaps the earliest was ''Reefer Madness'', a 1936 "educational" film that circulated under several different titles. It was rediscovered by Keith Stroup, founder of NORML, who circulated prints of the film around college film festivals in the 1970s. The company who produced the prints, New Line Cinema, was so successful they began producing their own films. The most controversial was perhaps a clip from a newscast from Portland, Oregon in November 1970. In the clip, the disposal of a beached whale carcass by dynamite is documented, including the horrific aftermath of falling mist and chunks since the exclusion zone was not big enough. The exploding whale story obtained urban legend status in the Northwest and gained new interest in 1990 after Dave Barry wrote a humorous column about the event, leading to copies being distributed over bulletin board systems around 1994. The "humorous home movie" genre dates back at least to 1963, when the TV series "Your Funny, Funny Films" debuted. The series showcased amusing film clips, mostly shot on 8mm equipment by amateurs. The idea was revived in 1989 with ''America's Funniest Home Videos'', a series described by an ABC executive as a one-time "reality-based filler special" that was inspired by a segment of a Japanese variety show, ''Fun With Ken and Kaito Chan'', borrowing clips from various Japanese home video shows as well. Now the longest-running primetime entertainment show in the history of ABC, the show's format includes showing clips of home videos sent in to the show's committee, and then the clips are voted on by a live filmed audience, with the winners winning a monetary prize. During the internet's public infancy, the 1996 ''Seinfeld'' episode "The Little Kicks" addresses the distribution of a viral video through non-online, non-broadcast means. It concludes with the citizens of New York City having individually witnessed Elaine's terrible dancing via a bootleg copy of a feature film, establishing that the dancing footage had effectively gone viral. Viral videos began circulating as animated GIFs small enough to be uploaded to websites over dial-up Internet access or through email as attachments in the early 1990s. Videos were also spread on message boards, P2P file sharing sites, and even coverage from mainstream news networks on television. Two of the most successful viral videos of the early internet era were "The Spirit of Christmas" and "Dancing Baby". "The Spirit of Christmas" surfaced in 1995, spread through bootleg copies on VHS and on the internet, as well as an AVI file on the PlayStation game disc for Tiger Woods 99 (which later led to a recall). The popularity of the videos led to the creation of the television series ''South Park'' after it was picked up by Comedy Central. "Dancing Baby", a 3D-rendered dancing baby video by the creators of Character Studio for 3D Studio MAX, became something of a late 1990s cultural icon in 1996 in part due to its exposure on worldwide commercials, editorials about Character Studio, and the popular television series ''Ally McBeal''. The video may have first spread when Ron Lussier, the animator who cleaned up the raw animation, began passing the video around his workplace, LucasArts. Later distribution of viral videos on the internet before YouTube, which was created in 2005 and bought by Google in 2006, were mostly through websites dedicated to hosting humorous content, such as Newgrounds and YTMND, although message boards such as eBaum's World and Something Awful were also instrumental. Notably, some content creators hosted their content on their own websites, such as Joel Veitch's site for his band Rather Good, which hosted quirky Flash videos for the band's songs; the most popular was "We Like the Moon", whose viral popularity on the internet prompted Quiznos to parody the song for a commercial. The most famous self-hosted home of viral videos is perhaps Homestar Runner, launched in 2000 and still running. The introduction of social media such as Facebook and Twitter has created even more avenues for videos to go viral. More recently, there has been a surge in viral videos on video sharing sites such as YouTube, partially because of the availability of affordable digital cameras. Beginning in December 2015, YouTube introduced a "trending" tab to alert users to viral videos using an algorithm based on comments, views, "external references", and even location. The feature reportedly does not use viewing history to serve up related content, and the content may be curated by YouTube.

There are several ways to gauge whether a video has "gone viral". The statistic perhaps most mentioned is number of views, and as sharing has become easier, the threshold requirement of sheer number of views has increased. YouTube personality Kevin Nalty (known as Nalts) recalls on his blog: "A few years ago, a video could be considered 'viral' if it hit a million views", but says as of 2011, only "if it gets more than 5 million views in a 3–7-day period" can it be considered "viral". To compare, 2004's ''Numa Numa'' received two million hits on Newgrounds in its first three months (a figure explained in a 2015 article as "a staggering number for the time"). Nalts also posits three other considerations: buzz, parody, and longevity, which are more complex ways of judging a viral video's views. Buzz addresses the heart of the issue; the more a video is shared, the more discussion the video creates both online and offline. What he emphasizes is notable is that the more buzz a video gets, the more views it gets. A study on viral videos by Carnegie Mellon University found that the popularity of the uploader affected whether a video would become viral, and having the video shared by a popular source such as a celebrity or a news channel also increases buzz. It is also part of the algorithm YouTube uses to predict popular videos. Parodies, spoofs and spin-offs often indicate a popular video, with long-popular video view counts given with original video view counts as well as additional view counts given for the parodies. Longevity indicates if a video has remained part of the Zeitgeist.

Due to their societal impact and marketability, viral videos attract attention in both advertising and academia, which try to account for the reason viral videos are spread and what will make a video go viral. Several theories exist. A viral video's longevity often relies on a hook which draws the audience to watch it. The hook is able to become a part of the viral video culture after being shown repeatedly. The hooks, or key signifiers, are not able to be predicted before the videos become viral. The early view pattern of a viral video can be used to forecast its peak day in future.