Click Here for Items Related To - University of La Laguna 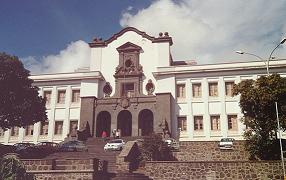 Its origins date to the year 1701 when a center for advanced studies was established by the Augustinians in the town of La Laguna. A Papal Bull of 1744 proposed that it be converted into the Ecclesiastical University of San Agustín. In 1792, by royal decree, Charles IV of Spain ordered the establishment in San Cristóbal de La Laguna, then the capital of Tenerife and Canary Islands, of the first ''Universidad Literaria'' of the Canaries, but the political situation on the mainland prevented its establishment. However, with the restoration of the House of Bourbon in the guise of Fernando VII of Spain, the university was established at La Laguna as the ''Universidad de San Fernando''. In this role it played an important role the priest Cristóbal Bencomo y Rodríguez, confessor of King Ferdinand VII and Titular Archbishop of Heraclea. The university, with its current name, was created with the same decree that divided the Canary Islands into two provinces in 1927, and reorganized in 1989, which led to the creation of the University of Las Palmas de Gran Canaria.

One of the most popular student traditions at La Laguna University is the popular ''Fuga de San Diego'' every November 13. Although born in the IES Canarias Cabrera Pinto of the city, it has a great following among the students of the University of La Laguna, as well as in the other educational centers of the Canary archipelago. This tradition had its origin in 1919, when university professor Diego Jiménez de Cisneros arrived at the institute, which one year prevented the students from attending the ''romería'' of St. Didacus of Alcalá. But the students did not attend a class, and this was repeated annually. This tradition consists, therefore, in the non-attendance of students to class that day. At present, this tradition has extended to the different schools, universities and secondary institutes of the rest of the Canary Islands.