The Turkish Armed Forces (TAF; tr|Türk Silahlı Kuvvetleri, TSK) are the military forces of the Republic of Turkey. Turkish Armed Forces consist of the General Staff, the Land Forces, the Naval Forces and the Air Forces. The current Chief of the General staff is General Yaşar Güler. The Chief of the General Staff is the Commander of the Armed Forces. In wartime, the Chief of the General Staff acts as the Commander-in-Chief on behalf of the President, who represents the Supreme Military Command of the TAF on behalf of the Grand National Assembly of Turkey. Coordinating the military relations of the TAF with other NATO member states and friendly states is the responsibility of the General Staff. The modern history of the army began with its formation after the collapse of the Ottoman Empire. The Turkish military perceived itself as the guardian of Kemalism, the official state ideology, especially of its emphasis on secularism. After becoming a member of NATO in 1952, Turkey initiated a comprehensive modernization program for its armed forces. The Turkish Army sent troops to fight in the Korean War. Towards the end of the 1980s, a second restructuring process was initiated. The Turkish Armed Forces participate in an EU Battlegroup under the control of the European Council, the Italian-Romanian-Turkish Battlegroup. The TAF also contributes operational staff to the Eurocorps multinational army corps initiative of the EU and NATO. The Turkish Armed Forces is the second largest standing military force in NATO, after the U.S. Armed Forces, with an estimated strength in 2015 of 639,551 military, civilian and paramilitary personnel. Turkey is one of five NATO member states which are part of the nuclear sharing policy of the alliance, together with Belgium, Germany, Italy, and the Netherlands. A total of 90 B61 nuclear bombs are hosted at the Incirlik Air Base. 40 of these are allocated for use by the Turkish Air Force in case of a nuclear conflict, but their use requires the approval of NATO.

After the end of World War I, following the occupation of Anatolia by Entente Powers, many Ottoman military personnel escaped from Rumelia to Anatolia in order to join the new Turkish National Movement (TNM). During the War of Independence, on 3 May 1920, Birinci Ferik Mustafa Fevzi Pasha (Çakmak) was appointed the Minister of National Defence, and Mirliva İsmet Pasha (İnönü) was appointed the Minister of the Chief of General Staff of the government of the Grand National Assembly (GNA). But on 3 August 1921, the GNA fired İsmet Pasha from the post of Minister of National Defence because of his failure at the Battle of Afyonkarahisar–Eskişehir and on 5 August, just before the Battle of Sakarya, appointed the chairman of the GNA Mustafa Kemal Pasha (Atatürk) as commander-in-chief of the Army of the GNA. The TNM won the War of Independence after İzmir was retrieved in 1922 as a result of Greco-Turkish Wars (1919–1922).

There were several rebellions southeastern Turkey in the 1920s and 1930s, the most important of which were the 1925 Sheikh Said rebellion and the 1937 Dersim rebellion. All were suppressed by the TAF, sometimes involving large-scale mobilisations of up to 50,000 troops. Associated atrocities against civilians include the Zilan massacre.

Turkey remained neutral until the final stages of World War II. In the initial stage of World War II, Turkey signed a treaty of mutual assistance with Great Britain and France. But after the fall of France, the Turkish government tried to maintain an equal distance with both the Allies and the Axis. Following Nazi Germany's occupation of the Balkans, upon which the Axis-controlled territory in Thrace and the eastern islands of the Aegean Sea bordered Turkey, the Turkish government signed a Treaty of Friendship and Non-Aggression with Germany on 18 June 1941. After the German invasion of the Soviet Union, the Turkish government sent a military delegation of observers under Lieutenant General Ali Fuat Erden to Germany and the Eastern Front. After the German retreat from the Caucasus, the Turkish government moved closer to the Allies and Winston Churchill secretly met with İsmet İnönü at the Adana Conference in Yenice Train Station in southern Turkey on 30 January 1943, with the intent of persuading Turkey to join the war on the side of the Allies. A few days before the start of Operation Zitadelle in July 1943, the Turkish government sent a military delegation under General Cemil Cahit Toydemir to Russia and observed the exercises of the 503rd Heavy Panzer Battalion and its equipment. But after the failure of Operation Zitadelle, the Turkish government participated in the Second Cairo Conference in December 1943, where Franklin D. Roosevelt, Churchill and İnönü reached an agreement on issues regarding Turkey's possible contribution to the Allies. On 23 February 1945, Turkey joined the Allies by declaring war against Germany and Japan, after it was announced at the Yalta Conference that only the states which were formally at war with Germany and Japan by 1 March 1945 would be admitted to the United Nations. 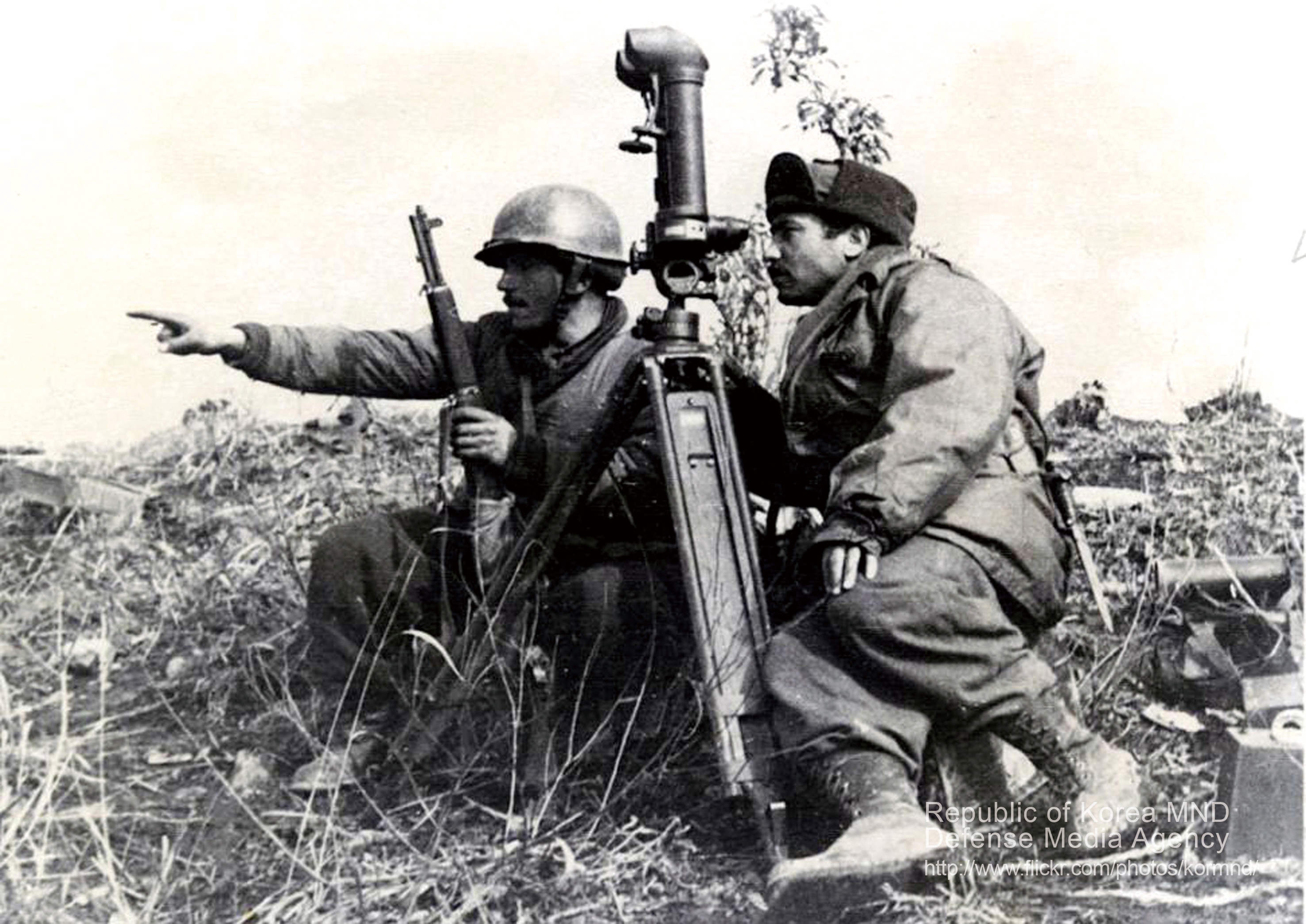 Turkey participated in the Korean War as a member state of the United Nations and sent the Turkish Brigade, which suffered 731 losses in combat, to South Korea. On 18 February 1952, Turkey became a member of NATO. The South Korean government donated a war memorial for the Turkish soldiers who fought and died in Korea. The Korean pagoda is in Ankara and it was donated in 1973 for the 50th anniversary of the Turkish Republic.

On 20 July 1974, the TAF launched an amphibious and airborne assault operation on Cyprus, in response to the 1974 Cypriot coup d'état which had been staged by EOKA-B and the Cypriot National Guard against president Makarios III with the intention of annexing the island to Greece; but the military intervention ended up with Turkey occupying a considerable area on the northern part of Cyprus and helping to establish a local government of Turkish Cypriots there, which has thus far been recognized only by Turkey. The intervention came after more than a decade of intercommunal violence (1963–1974) between the island's Greek Cypriots and Turkish Cypriots, resulting from the constitutional breakdown of 1963. Turkey invoked its role as a guarantor under the Treaty of Guarantee in justification for the military intervention. Turkish forces landed on the island in two waves, invading and occupying 37% of the island's territory in the northeast for the Turkish Cypriots, who had been isolated in small enclaves across the island prior to the military intervention. In the aftermath, the Turkish Cypriots declared a separate political entity in the form of the Turkish Federated State of Cyprus in 1975; and in 1983 made a unilateral declaration of independence as the Turkish Republic of Northern Cyprus, which is recognized only by Turkey to this day. The United Nations continues to recognize the sovereignty of the Republic of Cyprus according to the terms of its independence in 1960. The conflict continues to overshadow Turkish relations with Greece and with the European Union. In 2004, during the referendum for the Annan Plan for Cyprus (a United Nations proposal to resolve the Cyprus dispute) 76% of the Greek Cypriots rejected the proposal, while 65% of the Turkish Cypriots accepted it.

The TAF are in a protracted campaign against the PKK (recognized as a terrorist organization by the United States, the European Union and NATO) which has involved frequent forays into neighbouring Iraq and Syria. Abdullah Öcalan, the leader of the PKK was arrested in 1999 in Nairobi and taken to Turkey. In 2015, the PKK cancelled their 2013 ceasefire after tension due to various events.

War in Bosnia and Kosovo

Turkey contributed troops in several NATO-led peace forces in Bosnia and Kosovo. Currently there are 402 Turkish troops in Kosovo Force.

After the 2003 Istanbul Bombings were linked to Al-Qaeda, Turkey deployed troops to Afghanistan to fight Taliban forces and Al-Qaeda operatives, with the hopes of dismantling both groups. Turkey's responsibilities include providing security in Kabul (it currently leads Regional Command Capital), as well as in Wardak Province, where it leads PRT Maidan Shahr. Turkey was once the third largest contingent within the International Security Assistance Force. Turkey's troops are not engaged in combat operations and Ankara has long resisted pressure from Washington to offer more combat troops. According to the Washington Post, in December 2009, after US President Barack Obama announced he would deploy 30,000 more U.S. soldiers, and that Washington wants others to follow suit, Turkish Prime Minister Recep Tayyip Erdoğan reacted with the message that Turkey would not contribute additional troops to Afghanistan. "Turkey has already done what it can do by boosting its contingent of soldiers there to 1,750 from around 700 without being asked", said Erdoğan, who stressed that Turkey would continue its training of Afghan security forces.

The TAF have performed "Disaster Relief Operations," as in the 1999 İzmit earthquake in the Marmara Region of Turkey. Apart from contributing to NATO, the Turkish Navy also contributes to the Black Sea Naval Co-operation Task Group, which was created in early 2001 by Turkey, Bulgaria, Georgia, Romania, Russia and Ukraine for search and rescue and other humanitarian operations in the Black Sea.

According to the International Institute for Strategic Studies (IISS), in 2010 the Turkish Armed Forces had an active strength of around 402,000 active personnel, consisting of 77,000 professionals and 325,000 conscripts. In addition, it was estimated that there were 378,700 reserve personnel and 152,200 paramilitary personnel (Turkish Gendarmerie and Turkish Coast Guard), giving a combined active and reserve strength of around 932,900 personnel. In 2010, the defence budget amounted to 26 billion liras. The Law on the Court of Accounts was supposed to initiate external ex-post audits of armed forces' expenditure and pave the way for audits of extra budgetary resources earmarked for the defence sector, including the Defence Industry Support Fund. However, the Ministry of Defense has not provided the necessary information, so the armed forces expenditure is not being properly checked. In 1998, Turkey announced a programme of modernisation worth US$160 billion over a twenty-year period in various projects including tanks, fighter jets, helicopters, submarines, warships and assault rifles. Turkey is a Level 3 contributor to the Joint Strike Fighter (JSF) programme. The final goal of Turkey is to produce new-generation indigenous military equipment and to become increasingly self-sufficient in terms of military technologies. Havelsan of Turkey and Boeing of the United States are in the process of developing a next-generation, high-altitude ballistic missile defence shield. Turkey has chosen the Chinese defense firm CPMIEC to co-produce a $4 billion long-range air and missile system.

The Turkish Land Forces, or Turkish Army, can trace its origins in the remnants of Ottoman forces during the fall of the Ottoman Empire at the end of World War I. When Mustafa Kemal Atatürk and his colleagues formed the Grand National Assembly (GNA) in Ankara on 23 April 1920, the XV Corps under the command of Kâzım Karabekir was the only corps which had any combat value. On 8 November 1920, the GNA decided to establish a standing army (''Düzenli ordu'') instead of irregular troops (the ''Kuva-yi Milliye'', ''Kuva-yi Seyyare'', etc.) The army of the government of the GNA won the Turkish War of Independence in 1922. As of 2006, the Turkish Army had 1,300 troops deployed in northern Iraq, according to documents released as part of the United States diplomatic cables leak. The Turkish Army also maintains around 17,500 troops in Northern Cyprus, as part of the Cyprus Turkish Peace Force (''Kıbrıs Türk Barış Kuvvetleri'', or KTBK.) (Explosive Ordnance Disposal) teams in contact detection & tactical walking training.

The [[Turkish Naval Forces, or Turkish Navy, constitutes the [[naval warfare service branch of the Turkish Armed Forces. The Turkish Navy maintains several Marines and Special Operations units. The ''Amphibious Marines Brigade'' (Amfibi Deniz Piyade Tugayı) based in Foça near İzmir consists of 4,500 men, three amphibious battalions, an MBT battalion, an artillery battalion, a support battalion and other company-sized units. The ''Su Altı Taarruz'' (S.A.T. – Underwater Attack) is dedicated to missions including the acquisition of military intelligence, amphibious assault, counter-terrorism and VIP protection; while the ''Su Altı Savunma'' (S.A.S. – Underwater Defense) is dedicated to coastal defense operations (such as clearing mines or unexploded torpedoes) and disabling enemy vessels or weapons with underwater operations; as well as counter-terrorism and VIP protection missions.