Field Marshal Thanom Kittikachorn ( th|ถนอม กิตติขจร, ; 11 August 1911 – 16 June 2004) was a Thai military dictator. A staunch anti-communist, Thanom oversaw a decade of military rule in Thailand from 1963 to 1973, during which he staged a self-coup, until public protests which exploded into violence forced him to step down. His return from exile in 1976 sparked protests which led to a massacre of demonstrators, followed by a military coup.

Thanom Kittikachorn was born in Tak Province to Khun (ขุน) Sopitbannaraksa (Amphan Kittikachorn) and his wife, Mrs Linchee Kittikachorn. His family was of Thai Chinese descent. He attended Wat Koak Plu Municipal School, then was admitted to the Army Cadet Academy. After receiving his commission, he reported for duty with Infantry Regiment VII in Chiang Mai. Thanom later studied at the Cartography School and the Infantry School, and graduated from the National Defense College in its first class.

After serving in the Shan States of Burma during World War II, then Lieutenant Colonel Thanom took part in a successful 1947 coup headed by Colonel Sarit Thanarat. He became a regimental commander and was head of the Lopburi military department. He was soon promoted to colonel, commanding the 11th Infantry Division. Thanom was appointed a member of parliament in 1951, his first political role. He was promoted to major general the same year. In February 1953, Thanom led the suppression of a rebellion against military rule, and was rewarded with promotion to lieutenant general. He represented Thailand at the ceremony to mark the end of the Korean War in July 1953 and was later promoted as commander of the 1st Region Army. He was appointed deputy cooperatives minister in 1955. Thanom supported Sarit in his coup against the government of Field Marshal Plaek Phibunsongkhram, and was subsequently appointed defence minister in Pote Sarasin's puppet regime in 1957. Thanom consolidated his power base as the second military leader and right-hand man of Sarit. A few days after the December 1957 general election, in which the pro-government Sahaphum Party ("United Land") had performed disappointingly, Thanom co-founded the National Socialist Party ''(Chat Sangkhomniyom)''. He became the deputy leader of this party, designed to extend the pro-government camp and win over former members of Phibunsongkhram's Seri Manangkhasila Party who had been reelected to parliament as independents. In 1958, he was made a full general and assumed the offices of prime minister and defence minister. He was prime minister for nine months, after which he was replaced by Sarit himself and made deputy prime minister, defence minister, and armed forces deputy supreme commander. 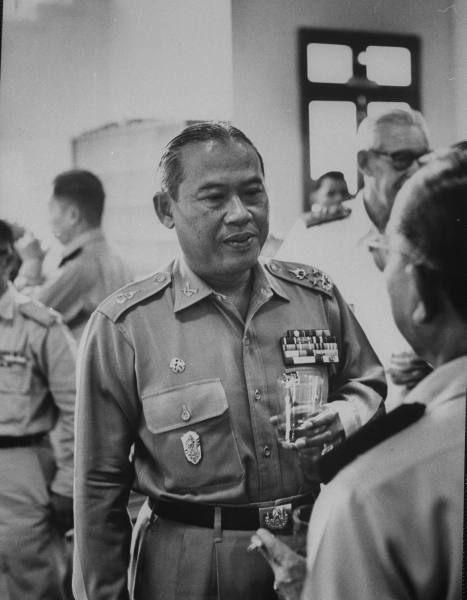 Thanom was appointed prime minister one day after Sarit's death in 1963. He subsequently appointed himself commander-in-chief of the army. One year later, he promoted himself to the concurrent ranks of field marshal, admiral of the fleet, and Marshal of the Royal Thai Air Force. Thanom continued the pro-American and anti-communist politics of his predecessor, which helped to ensure massive US economic and financial aid during the Vietnam War. Although he was personally popular, his regime was known for massive corruption. He established and led the United Thai People's Party ''(Saha Prachathai)'' in October 1968. Thanom reappointed himself prime minister in February 1969 after general elections had been completed. The following year saw the beginnings of the 1970s peasant revolts in Thailand. Then, in November 1971, he staged a coup against his own government, citing the need to suppress communist infiltration. He dissolved parliament and appointed himself Chairman of the National Executive Council, and served as a caretaker government for one year. In December 1972, he appointed himself prime minister for a fourth time, also serving as the defence and foreign ministers. Thanom, his son Colonel Narong, and Narong's father-in-law General Praphas Charusathien became known as the "three tyrants". Public discontent grew, along with demands for a general election to choose a new parliament. Student-led demands for a return to constitutional government, the so-called "14 October 1973 uprising", led to three days of violence followed by the sudden downfall of his government. Thanom and the other "tyrants" flew to exile in the United States and Singapore. Thanom's departure was followed by a restoration of a democratic rule in Thailand.

In October 1976, Thanom returned to Thailand in the robes of a novice monk, to stay at Bangkok's Wat Bowonniwet. Even though he announced he had no desire to enter politics, his return triggered student protests, which eventually moved onto the campus of Thammasat University. This was only a year after South Vietnam and Thailand's neighbors Laos and Cambodia had fallen to the communists, and right-wing Thais suspected the protesters wished the same fate for their own country. On 6 October 1976, right-wing militants, aided by government security forces, stormed the Thammasat campus, violently broke up the protests, and killed many protesters. That evening, the military seized power from the elected civilian government of Democrat MR Seni Pramoj and installed hard-line royalist Thanin Kraivichien as premier. Thanom soon left the monkhood, but he kept his word never to take part in politics again. Late in his life, he attempted to rehabilitate his tarnished image and recover properties seized when his government was overthrown. In March 1999, Thanom was nominated to be a member of the honorary Royal Guard by Prime Minister Chuan Leekpai, which led to controversy. Thanom settled the matter himself by turning down the appointment. Thanom Kittikachorn died in 2004 the age of 92 in Bangkok General Hospital, after suffering a stroke and a heart attack two years earlier. His family's medical expenses were paid by King Bhumibol Adulyadej, which some saw as payback for Thanom's agreeing to the king's request that he leave the country to end the violence in 1973. Thanom's cremation was held on 25 February 2007 at Wat Debsirin. Queen Sirikit presided over the cremation ceremony, lighting the royal flame on behalf of King Bhumibol. Her youngest daughter, the Princess Chulabhorn, also presided. Thanom's wife died in 2012 aged 98.

Thanom received the following royal decorations in the Honours System of Thailand: * 1925 -

Knight Grand Commander of the Honourable Order of Rama * 1969 -

Grand Cross of the Order of the Dannebrog * : **

Special Grand Cordon of the Order of Propitious Clouds **

Special Grand Cordon of the Order of the Cloud and Banner * : **

Grand Cross 1st Class of the Order of Merit of the Federal Republic of Germany * : **

Grand Cross of the Order of Civil Merit **

Grand Cross with White Decoration of the Order of Military Merit *: **

Grand Cross of the Order of the Holy Trinity * : **

Commander Grand Cross of the Royal Order of the Sword * : **

Grand Cross of the Order of Saint Sylvester * : **

Grand Cross of the Order of the Netherlands Lion **

Grand Cross of the Order of Orange-Nassau * : **

Grand Cross of the Order of the Liberator General San Martín * : **

Grand Cordon of the Order of the Rising Sun * : **

Commander Grand Cross of the Order of the White Rose of Finland * : **

Grand Cross of the Order of the Southern Cross * : **

Grand Cross of the National Order of Vietnam * : **

Grand Cross of the Order of the Million Elephants and the White Parasol * : **

Grand Star of the Decoration of Honour for Services to the Republic of Austria * : **

Blue Stripes of the Order of Service Merit, 1st Class