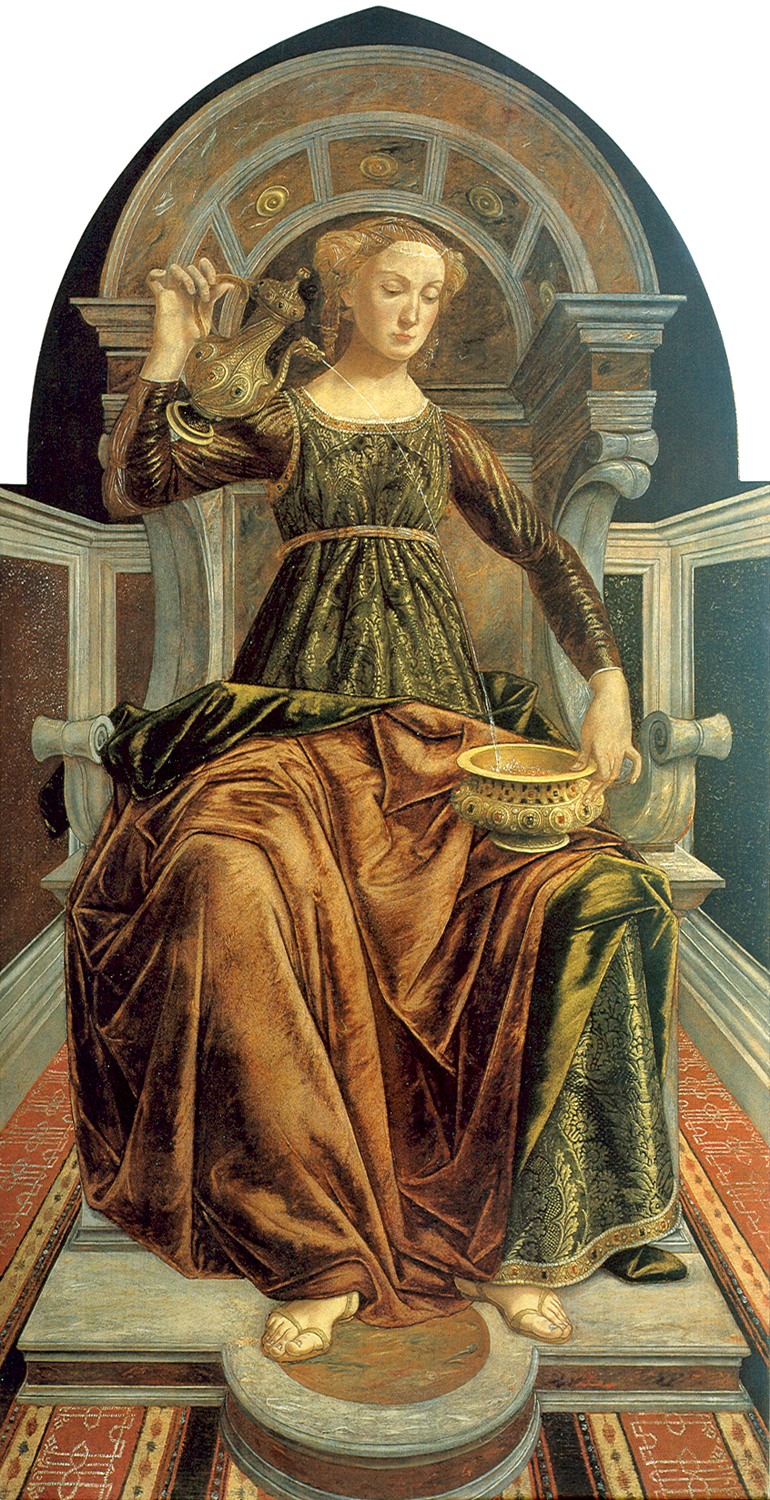 Temperance in its modern use is defined as moderation or voluntary self-restraint. It is typically described in terms of what an individual voluntarily refrains from doing. This includes restraint from revenge by practicing non-violence and forgiveness, restraint from arrogance by practicing humility and modesty, restraint from excesses such as extravagant luxury or splurging by practicing prudence, and restraint from rage or craving by practicing calmness and self-control. Temperance has been described as a virtue by religious thinkers, philosophers, and more recently, psychologists, particularly in the positive psychology movement. It has a long history in philosophical and religious thought. In classical iconography, the virtue is often depicted as a woman holding two vessels transferring water from one to another. It is one of the cardinal virtues in western thought found in Greek philosophy and Christianity, as well as eastern traditions such as Buddhism and Hinduism. Temperance is one of the six virtues in the positive psychology classification, included with wisdom, courage, humanity, justice, and transcendence. It is generally characterized as the control over excess, and expressed through characteristics such as chastity, modesty, humility, self-regulation, hospitality, decorum, abstinence, forgiveness and mercy; each of these involves restraining an excess of some impulse, such as sexual desire, vanity, or anger. The term "temperance" can also refer to the abstention from alcohol (teetotalism), especially with reference to the temperance movement. It can also refer to alcohol moderation.

There are two words in ancient Greek that have been translated to "temperance" in the English language. The first, ''sôphrosune'', largely meant ''self-restraint''. The other, ''enkrateia'', was a word coined during the time of Aristotle, to mean ''control over oneself'', or ''self-discipline''. Enkrateia appears three times in the King James Bible, where it was translated as temperance. The modern meaning of temperance has evolved since its first usage. In Latin, tempero means restraint (from force or anger), but also more broadly the proper balancing or mixing (particularly, of temperature, or compounds). Hence the phrase "to temper a sword", meaning the heating and cooling process of forging a metal blade. The Latin also referred to governing and control, likely in a moderate way (i.e. not with the use of excessive force) eeds references Temperance is a major Athenian virtue, as advocated by Plato; self-restraint (sôphrosune) is one of his four core virtues of the ideal city, and echoed by Aristotle. According to Aristotle, "temperance is a mean with regard to pleasures". In "Charmides", one of Plato's early dialogues, the one who possessed ''sophrosune'' is defined in four ways: (1) one who has quietness, (2) one who has modesty, (3) one who does his own business, and (4) one who knows himself. Plato quickly dismisses the three first definitions and argues against (4) that if ''sophrosune'' would have been only the property of knowing what one knows or not, then it would be useless without knowledge about other matters.

Themes of temperance can be seen across cultures and time, as illustrated here.

Temperance is an essential part of the Eightfold Path. In the Dhammacakkappavattana Sutta, often regarded as the first teaching, the Buddha describes the Noble Eightfold Path as the Middle Way of moderation, between the extremes of sensual indulgence and self-mortification. The third and fifth of the five precepts (pañca-sila) reflect values of temperance: "misconduct concerning sense pleasures" and drunkenness are to be avoided.

In the Christian tradition, temperance is prolific. The Old Testament emphasizes temperance as a core virtue, as evidenced in both Solomon's Book of Proverbs and in the Ten Commandments, with its admonitions against adultery and covetousness. The New Testament does so as well, with forgiveness being central to theology and self-control being one of the Fruits of the Spirit.