The renminbi (abbreviated RMB; ; symbol: 元/¥; code: CNY) is the official currency of the People's Republic of China and one of the world's reserve currencies. The yuan () is the basic unit of the renminbi, but the word is also used to refer to the Chinese currency generally, especially in international contexts. One yuan divides into ten jiao (), and a jiao in turn divides into ten fen (). The renminbi is issued by the People's Bank of China, the monetary authority of China.

Until 2005, the value of the renminbi was pegged to the US dollar. As China pursued its transition from central planning to a market economy and increased its participation in foreign trade, the renminbi was devalued to increase the competitiveness of Chinese industry. It has previously been claimed that the renminbi's official exchange rate was undervalued by as much as 37.5% against its purchasing power parity. However, more recently, appreciation actions by the Chinese government, as well as quantitative easing measures taken by the American Federal Reserve and other major central banks, have caused the renminbi to be within as little as 8% of its equilibrium value by the second half of 2012. Since 2006, the renminbi exchange rate has been allowed to float in a narrow margin around a fixed base rate determined with reference to a basket of world currencies. The Chinese government has announced that it will gradually increase the flexibility of the exchange rate. As a result of the rapid internationalization of the renminbi, it became the world's 8th most traded currency in 2013, 5th by 2015, but 6th in 2019. On 1 October 2016, the RMB became the first emerging market currency to be included in the IMF's special drawing rights basket, the basket of currencies used by the IMF (reserve currency).

} |renminbi |"people's currency" |- |Formal name for 1 unit | or | zh|labels=no|p=yuán |yuan |"round" |- |Formal name for unit | | zh|labels=no|p=jiǎo |jiao |"corner" |- |Formal name for unit | | zh|labels=no|p=fēn |fen |"fraction" |- |Colloquial name for 1 unit | | zh|labels=no|p=kuài |kuai or quay |"piece" |- |Colloquial name for unit | | zh|labels=no|p=máo |mao |"feather" |- The ISO code for the renminbi is CNY, an abbreviation of "Chinese yuan" as it is often referred to in international finance. Hong Kong markets that trade renminbi at free-floating rates use the unofficial code CNH. This is to distinguish the rates from those fixed by Chinese central banks on the mainland. RMB is not a currency code but is sometimes used like one in China. The currency symbol is ¥, but because it is shared with the Japanese yen, CN¥ is sometimes used. However, in written Chinese contexts the Chinese character for yuan ( zh|links=no|c=元|l=beginning|s=|t=|p=) or, in formal contexts, ( zh|links=no|c=圆|l=round) usually follows the number in lieu of a currency symbol. ''Renminbi'' is the name of the currency while ''yuan'' is the name of the primary unit of renminbi. This is analogous to the difference between "sterling" and "pound" when discussing the official currency of the United Kingdom, the pound sterling. ''Jiao'' and ''fen'' are also units of renminbi. In everyday Mandarin, kuai ( zh|links=no|c=块|p=''kuài''|l=piece) is usually used when discussing money and renminbi or yuan are rarely heard. Similarly, Mandarin speakers typically use mao ( zh|links=no|c=毛|p=máo) instead of jiao. Renminbi is sometimes referred to as the "redback," a play on "greenback", the casual term for the US dollar. 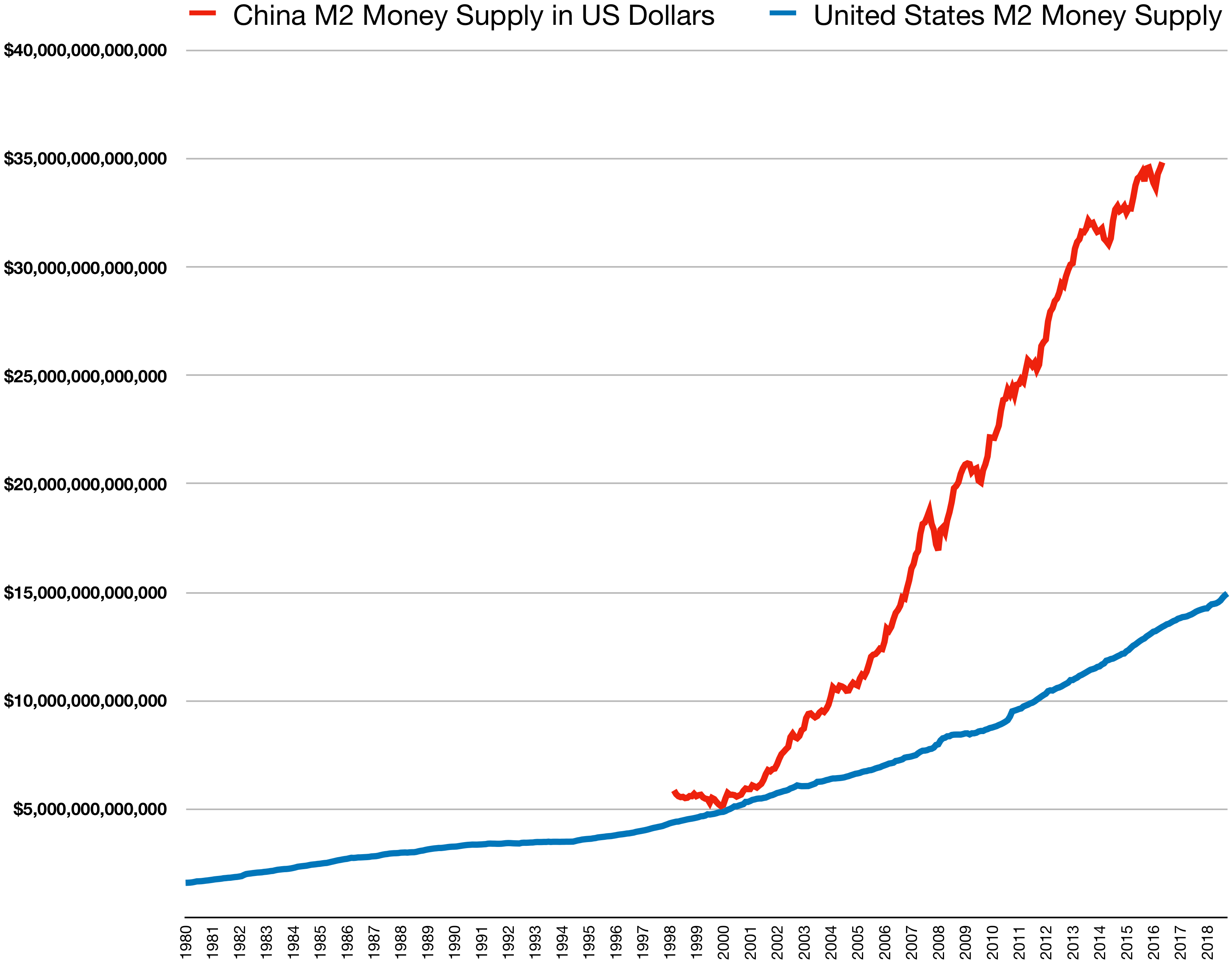 A variety of currencies circulated in China during the Republic of China (ROC) era, most of which were denominated in the unit ''yuán'' (Mandarin pronunciation in IPA: ). Each was distinguished by a currency name, such as the ''fabi'' ("legal tender"), the "gold yuan", and the "silver yuan". The renminbi was introduced by the People's Bank of China in December 1948, about a year before the establishment of the People's Republic of China. It was issued only in paper money form at first, and replaced the various currencies circulating in the areas controlled by the Communists. One of the first tasks of the new government was to end the hyperinflation that had plagued China in the final years of the Kuomintang (KMT) era. That achieved, a revaluation occurred in 1955 at the rate of 1 new yuan = 10,000 old yuan. As the Communist Party of China took control of ever larger territories in the latter part of the Chinese Civil War, its People's Bank of China began in 1948 to issue a unified currency for use in Communist-controlled territories. Also denominated in ''yuan'', this currency was identified by different names, including "People's Bank of China banknotes" (; from November 1948), "New Currency" (; from December 1948), "People's Bank of China notes" (; from January 1949), "People's Notes" (人民券, as an abbreviation of the last name), and finally "People's Currency", or "''renminbi''", from June 1949.

Era of the planned economy

From 1949 until the late 1970s, the state fixed China's exchange rate at a highly overvalued level as part of the country's import-substitution strategy. During this time frame, the focus of the state's central planning was to accelerate industrial development and reduce China's dependence on imported manufactured goods. The overvaluation allowed the government to provide imported machinery and equipment to priority industries at a relatively lower domestic currency cost than otherwise would have been possible.

Transition to an equilibrium exchange rate

China's transition by the mid-1990s to a system in which the value of its currency was determined by supply and demand in a foreign exchange market was a gradual process spanning 15 years that involved changes in the official exchange rate, the use of a dual exchange rate system, and the introduction and gradual expansion of markets for foreign exchange. The most important move to a market-oriented exchange rate was an easing of controls on trade and other current account transactions, as occurred in several very early steps. In 1979 the State Council approved a system allowing exporters and their provincial and local government owners to retain a share of their foreign exchange earnings, referred to as foreign exchange quotas. At the same time, the government introduced measures to allow retention of part of the foreign exchange earnings from non-trade sources, such as overseas remittances, port fees paid by foreign vessels, and tourism. As early as October 1980, exporting firms that retained foreign exchange above their own import needs were allowed to sell the excess through the state agency responsible for the management of China's exchange controls and its foreign exchange reserves, the State Administration of Exchange Control. Beginning in the mid-1980s, the government sanctioned foreign exchange markets, known as swap centers eventually in most large cities. The government also gradually allowed market force to take the dominant role by introducing an "internal settlement rate" of RMB 2.8 to 1 US dollar which was a devaluation of almost 100 percent.

In November 1993 the Third Plenum of the Fourteenth CPC Central Committee approved a comprehensive reform strategy in which foreign exchange management reforms were highlighted as a key element for a market-oriented economy. A floating exchange rate regime and convertibility for RMB were seen as the ultimate goal of the reform. Conditional convertibility under current account was achieved by allowing firms to surrender their foreign exchange earning from current account transactions and purchase foreign exchange as needed. Restrictions on Foreign Direct Investment (FDI) was also loosened and capital inflows to China surged.

During the era of the command economy, the value of the renminbi was set to unrealistic values in exchange with western currency and severe currency exchange rules were put in place. With the opening of the Chinese economy in 1978, a dual-track currency system was instituted, with renminbi usable only domestically, and with foreign visitors to China forced to use foreign exchange certificates. The unrealistic levels at which exchange rates were pegged led to a strong black market in currency transactions. In the late 1980s and early 1990s, China worked to make the RMB more convertible. Through the use of swap centres, the exchange rate was brought to realistic levels and the dual track currency system was abolished. As of 2013, the renminbi is convertible on current accounts but not capital accounts. The ultimate goal has been to make the RMB fully convertible. However, partly in response to the Asian financial crisis in 1998, China has been concerned that the Chinese financial system would not be able to handle the potential rapid cross-border movements of hot money, and as a result, as of 2012, the currency trades within a narrow band specified by the Chinese central government. Following the Internationalization of the renminbi, on 30 November 2015, the IMF voted to designate the renminbi as one of several main world currencies, thus including it in the basket of special drawing rights. The RMB became the first emerging market currency to be included in the IMF's SDR basket on 1 October 2016. The other main world currencies are the United States dollar, euro, British pound, and Japanese yen.

In October 2019, China's central bank, PBOC, announced that a digital reminbi is going to be released after years of preparation. The version of the currency, also called DCEP (Digital Currency Electronic Payment), is based on cryptocurrency which can be “decoupled” from the banking system to give visiting tourists a taste of the nation's burgeoning cashless society. The announcement received a variety of responses: some regard it as an attempt of the Chinese government to circumvent US dollars in international banking and settlement of payments, thereby disrupting or weakening America's ability to leverage the dollar as the world currency to pursue its broader geopolitical interests, while others believe it is more about domestic control and surveillance. Some argue that the real barriers to internationalisation of the renminbi are China's capital controls, which it has no plans to remove. Maximilian Kärnfelt, an expert at the Mercator Institute for China Studies, said that a digital renminbi "would not banish many of the problems holding the renminbi back from more use globally". He went on to say, "Much of China's financial market is still not open to foreigners and property rights remain fragile." The PBOC has filed more than 80 patents surrounding the integration of a digital currency system, choosing to embrace the blockchain technology. The patents reveal the extent of China's digital currency plans. The patents, seen and verified by the Financial Times, include proposals related to the issuance and supply of a central bank digital currency, a system for interbank settlements that uses the currency, and the integration of digital currency wallets into existing retail bank accounts. Several of the 84 patents reviewed by the Financial Times indicate that China may plan to algorithmically adjust the supply of a central bank digital currency based on certain triggers, such as loan interest rates. Other patents are focused on building digital currency chip cards or digital currency wallets that banking consumers could potentially use, which would be linked directly to their bank accounts. The patent filings also point to the proposed ‘tokenomics’ being considered by the DCEP working group. Some patents show plans towards programmed inflation control mechanisms. While the majority of the patents are attributed to the PBOC's Digital Currency Research Institute, some are attributed to state-owned corporations or subsidiaries of the Chinese central government. Uncovered by the Chamber of Digital Commerce, their contents shed light on Beijing's mounting efforts to digitise the renminbi, which has sparked alarm in the West and spurred central bankers around the world to begin exploring similar projects.