Click Here for Items Related To - Provinces Of China

The government of each standard province () is nominally led by a provincial committee, headed by a secretary. The committee secretary is first-in-charge of the province; second-in-command is the governor of the provincial government. In practice, day-to-day affairs are managed by a provincial party standing committee, which makes decisions for a province analogous to the Politburo for the central government. The People's Republic of China (PRC) claims the island of Taiwan and its surrounding islets, including Penghu, as "Taiwan Province, People's Republic of China, Taiwan Province", though Taiwan has not been under control of a government that ruled from mainland China since 1949, when the Republic of China (1912–1949), Republic of China (ROC) lost the mainland to the Communist Party of China, which established the PRC. (Kinmen and the Matsu Islands are claimed by the PRC as part of its Fujian Province. Pratas Island and the Vereker Banks and Itu Aba (Taiping Island) are claimed by the PRC as part of Guangdong and Hainan provinces respectively.) The territory is controlled by the Taiwan, Republic of China (ROC, commonly called "Taiwan") though the provinces were streamlined in 1998 and the provincial governments were de facto dissolved in 2019.

A special administrative region (SAR) () is a highly autonomous and self-governing sub national subject of the People's Republic of China that is directly under the Central People's Government. Each SAR has a chief executive as head of the region and head of government. The region's government is not fully independent, as foreign policy and military defence are the responsibility of the central government, according to the basic laws. 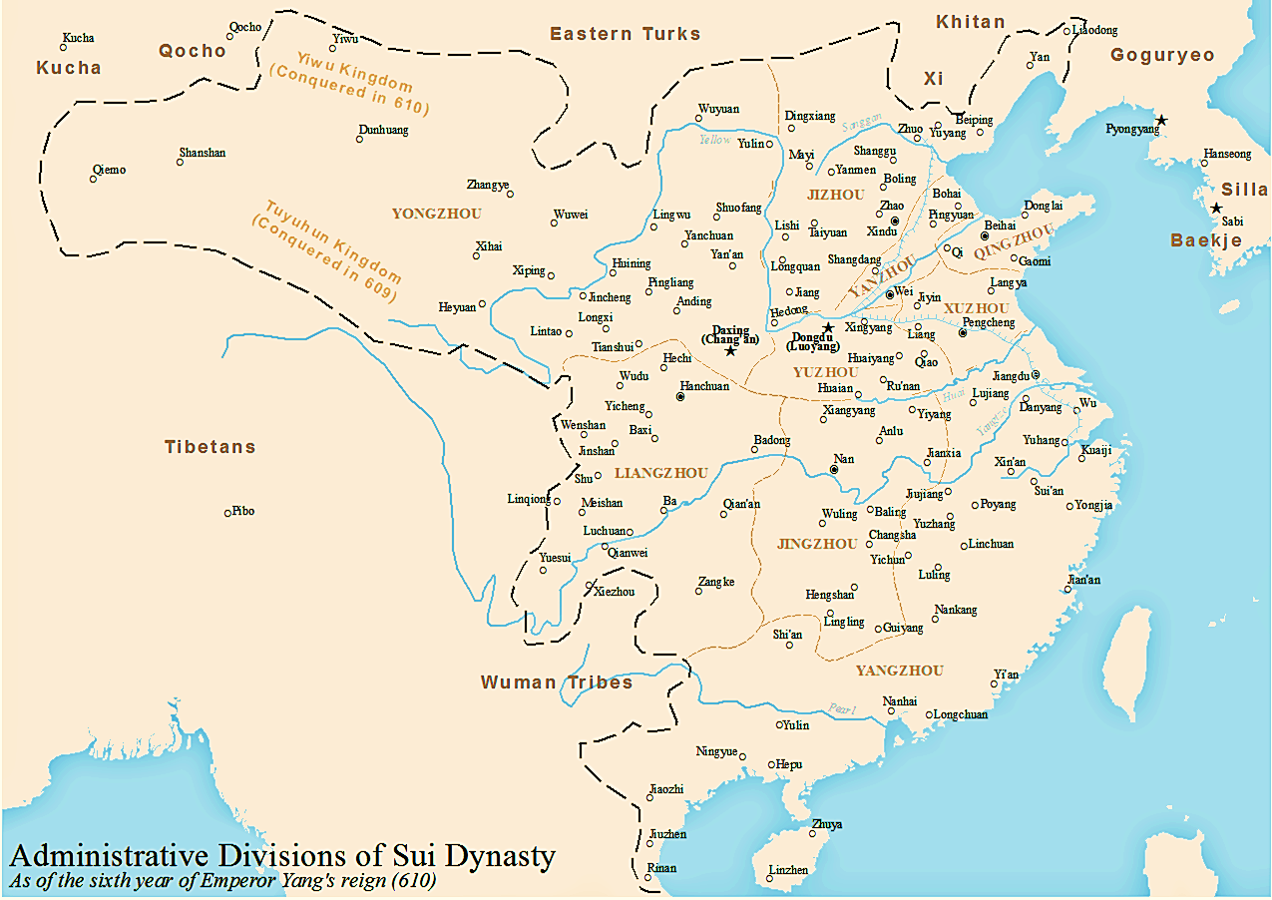 By the time unity was finally reestablished by the Sui dynasty, the provinces had been divided and redivided so many times by different governments that they were almost the same size as commanderies, rendering the two-tier system superfluous. As such, the Sui merged the two together. In English, this merged level is translated as "prefectures". In Chinese, the name changed between ''zhou'' and ''jun'' several times before being finally settled on ''zhou''. Based on the apocryphal Nine Provinces (China), Nine Province system, the Sui restored nine ''zhou''.

Emperor Taizong of Tang, Emperor Taizong (r. 626–649) set up 10 "circuit (political division), circuits" () in 627 as inspection areas for imperial commissioners monitoring the operation of prefectures, rather than a new primary level of administration. In 639, there were 10 circuits, 43 commanderies (), and 358 prefectures ( and later ). In 733, Emperor Xuanzong of Tang China, Emperor Xuanzong expanded the number of circuits to 15 by establishing separate circuits for the areas around Chang'an and Luoyang, and by splitting the large Shannan and Jiangnan circuits into 2 and 3 new circuits respectively. He also established a system of permanent inspecting commissioners, though without executive powers. Circuits established under Xuanzong, as opposed to Taizong's original ten circuits. Circuits established under Xuanzong by dividing Taizong's Jiangnan and Shannan circuits. Other Tang-era circuits include the West Lingnan Circuit, West Lingnan, Wu'an Circuit, Wu'an, and Qinhua circuits. 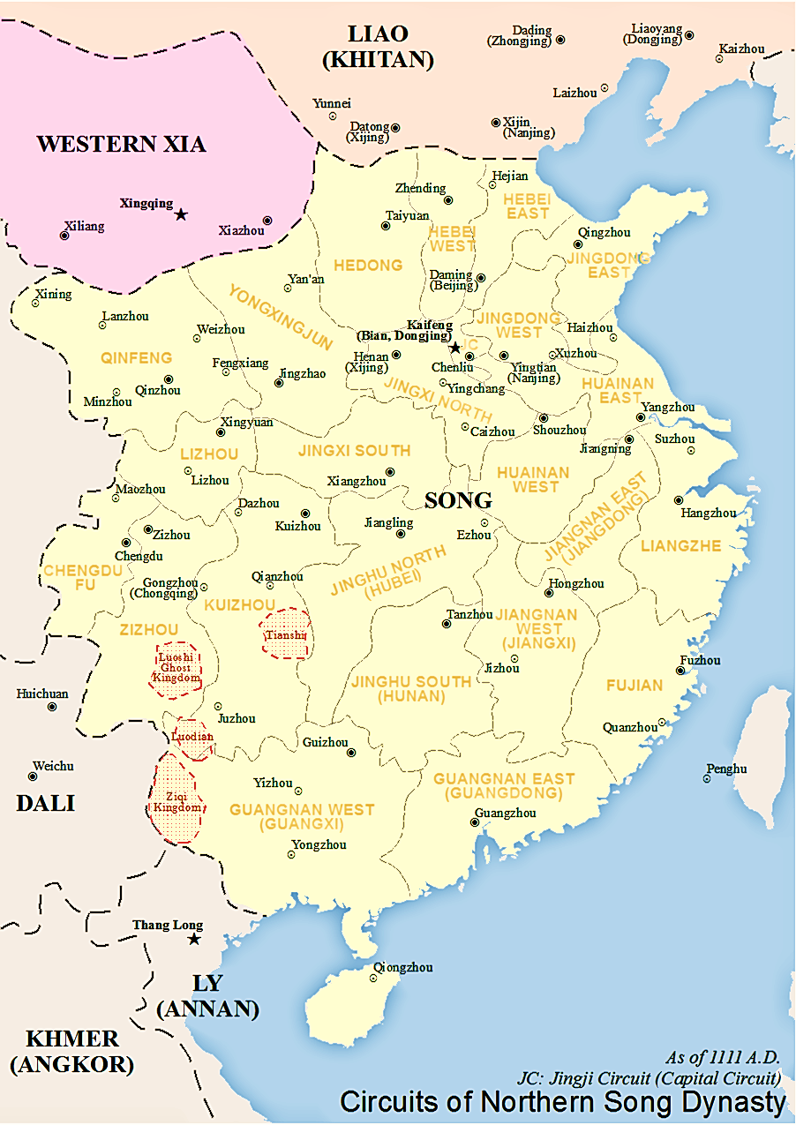 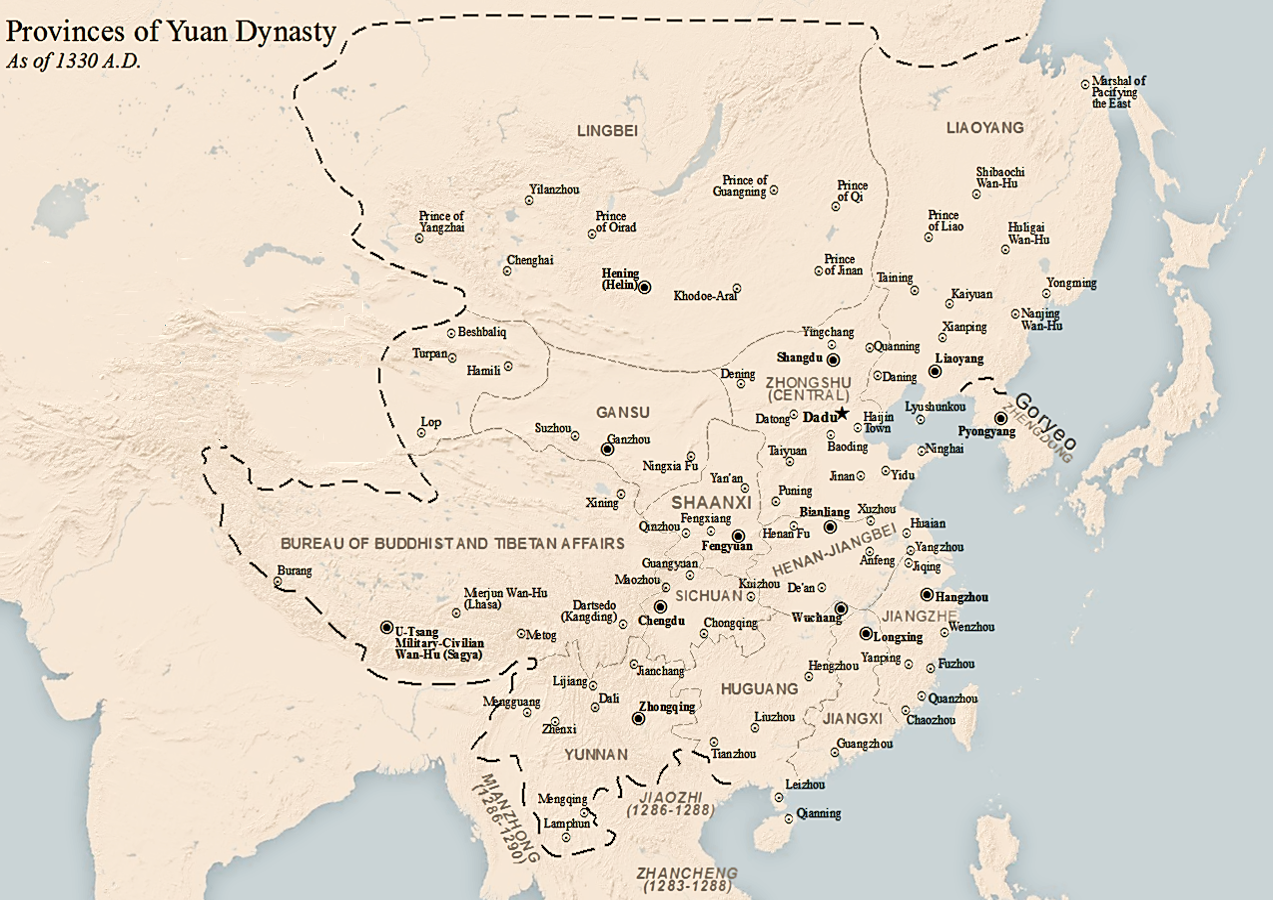 The Ming Dynasty (1368–1644) kept the province system set up by the Yuan Dynasty, however, it divided the original 10 provinces into 16 provinces, later 2 capital metropolitan areas and 13 provinces () within China proper and 5 additional military ruled regions.

By the latter half of the Qing Dynasty (1644–1912), there were 18 provinces, all of them in China proper (). Jiangsu and Anhui were originally one province called Jiangnan, with its capital at Nanjing. There was no discrete time period when the two halves of Jiangnan were split, but rather, this was a gradual process.

* Xinjiang () 1884–1912 * Liaoning, Fengtian () 1907–1912 * Jilin () 1907–1912 * Heilongjiang () 1907–1912 * Taiwan Province, People's Republic of China, Taiwan () 1885–1895 Each province had a ''xunfu'' (; translated as "governor"), a political overseer on behalf of the emperor, and a ''tidu'' (; translated as "captain general"), a military governor. In addition, there was a ''zongdu'' (), a general military inspector or governor general, for every two to three provinces. Outer regions of China (those beyond China proper) were not divided into provinces. Military leaders or generals () oversaw Manchuria (consisting of Fengtian (now Liaoning), Jilin, Heilongjiang), Xinjiang, and Mongolia, while vice-''dutong'' () and civilian leaders headed the Leagues of China, leagues (), a subdivision of Mongolia. The ''ambans'' () supervised the administration of Tibet. In 1884 Xinjiang became a province; in 1907 Liaoning, Fengtian, Jilin, and Heilongjiang were made provinces as well. Taiwan became a province in 1885, but China ceded Taiwan to Japan in 1895. As a result, there were 22 provinces in China (Outer China and China proper) near the end of the Qing Dynasty.

The China, People's Republic of China abolished many of the provinces in the 1950s and converted a number of them into autonomous regions of China, autonomous regions. Hainan became a separate province in 1988, bringing the total number of provinces under PRC control to 22. In contrast, the Taiwan, Republic of China also had a number of provinces under its control such as Taiwan Province, Taiwan and Fujian Province, Republic of China, Fujian, which the ROC currently administers, though the ROC abolished the Xinjiang Province, Republic of China, Xinjiang Provincial Office in 1992. In 1998, after streamlining of the two provinces, some of its powers from the Taiwan Provincial Government, Taiwan and Fujian Provincial Governments were gradually transferred to County (Taiwan), county governments. This fractured further between 2018 and 2019 when the ROC central government ''de facto'' abolished the provincial governments with most of the remaining powers given to the Executive Yuan.

During the 20th century, China claimed that numerous neighbouring countries and regions in Asia were lost territories of China. Many of these lost territories were under the rule of Imperial Chinese dynasties or were List of tributaries of China, tributary states. Sun Yat-sen claimed that these territories were lost due to unequal treaties, forceful occupation and annexation, and foreign interference. Chiang Kai-shek and Mao Zedong, among others, were supportive of these claims. China published a series of maps during this time known as a Map of National Shame () which showcased some of the lost territories that had links to various Imperial Chinese dynasties.

The provinces in southeast coastal area of China – such as Jiangsu, Zhejiang, Fujian and (mainly) Guangdong – tend to be more industrialisation, industrialized, with regions in the hinterland less economic development, developed.