Political corruption or Malpolitics is the use of powers by government officials or their network contacts for illegitimate private gain. Forms of corruption vary, but can include bribery, lobbying, extortion, cronyism, nepotism, parochialism, patronage, influence peddling, graft, and embezzlement. Corruption may facilitate criminal enterprise such as drug trafficking, money laundering, and human trafficking, though it is not restricted to these activities. Misuse of government power for other purposes, such as repression of political opponents and general police brutality, is also considered political corruption. Over time, corruption has been defined differently. For example, in a simple context, while performing work for a government or as a representative, it is unethical to accept a gift. Any free gift could be construed as a scheme to lure the recipient towards some biases. In most cases, the gift is seen as an intention to seek certain favors such as work promotion, tipping in order to win a contract, job or exemption from certain tasks in the case of junior worker handing in the gift to a senior employee who can be key in winning the favor. Some forms of corruption – now called "institutional corruption" – are distinguished from bribery and other kinds of obvious personal gain. A similar problem of corruption arises in any institution that depends on financial support from people who have interests that may conflict with the primary purpose of the institution. An illegal act by an officeholder constitutes political corruption only if the act is directly related to their official duties, is done under color of law or involves trading in influence. The activities that constitute illegal corruption differ depending on the country or jurisdiction. For instance, some political funding practices that are legal in one place may be illegal in another. In some cases, government officials have broad or ill-defined powers, which make it difficult to distinguish between legal and illegal actions. Worldwide, bribery alone is estimated to involve over 1 trillion US dollars annually. A state of unrestrained political corruption is known as a kleptocracy, literally meaning "rule by thieves".

Consequences on politics, administration, and institutions

Political corruption undermines democracy and good governance by flouting or even subverting formal processes. Corruption in elections and in the legislature reduces accountability and distorts representation in policymaking; corruption in the judiciary compromises the rule of law; and corruption in public administration results in the inefficient provision of services. For republics, it violates a basic principle of republicanism regarding the centrality of civic virtue. More generally, corruption erodes the institutional capacity of government if procedures are disregarded, resources are siphoned off, and public offices are bought and sold. Corruption undermines the legitimacy of government and such democratic values as trust and tolerance. Recent evidence suggests that variation in the levels of corruption amongst high-income democracies can vary significantly depending on the level of accountability of decision-makers. Evidence from fragile states also shows that corruption and bribery can adversely impact trust in institutions. Corruption can also impact government's provision of goods and services. It increases the costs of goods and services which arise from efficiency loss. In the absence of corruption, governmental projects might be cost-effective at their true costs, however, once corruption costs are included projects may not be cost-effective so they are not executed distorting the provision of goods and services.

In the private sector, corruption increases the cost of business through the price of illicit payments themselves, the management cost of negotiating with officials and the risk of breached agreements or detection. Although some claim corruption reduces costs by cutting bureaucracy, the availability of bribes can also induce officials to contrive new rules and delays. Openly removing costly and lengthy regulations are better than covertly allowing them to be bypassed by using bribes. Where corruption inflates the cost of business, it also distorts the field of inquiry and action, shielding firms with connections from competition and thereby sustaining inefficient firms. Corruption may have a direct impact on the firm's effective marginal tax rate. Bribing tax officials can reduce tax payments of the firm if the marginal bribe rate is below the official marginal tax rate. However, in Uganda, bribes have a higher negative impact on firms’ activity than taxation. Indeed, a one percentage point increase in bribes reduces firm's annual growth by three percentage points, while an increase in 1 percentage point on taxes reduces firm's growth by one percentage point. Corruption also generates economic distortion in the public sector by diverting public investment into capital projects where bribes and kickbacks are more plentiful. Officials may increase the technical complexity of public sector projects to conceal or pave the way for such dealings, thus further distorting investment. Corruption also lowers compliance with construction, environmental, or other regulations, reduces the quality of government services and infrastructure, and increases budgetary pressures on government. Economists argue that one of the factors behind the differing economic development in Africa and Asia is that in Africa, corruption has primarily taken the form of rent extraction with the resulting financial capital moved overseas rather than invested at home (hence the stereotypical, but often accurate, image of African dictators having Swiss bank accounts). In Nigeria, for example, more than $400 billion was stolen from the treasury by Nigeria's leaders between 1960 and 1999. University of Massachusetts Amherst researchers estimated that from 1970 to 1996, capital flight from 30 Sub-Saharan countries totaled $187bn, exceeding those nations' external debts. (The results, expressed in retarded or suppressed development, have been modeled in theory by economist Mancur Olson.) In the case of Africa, one of the factors for this behavior was political instability and the fact that new governments often confiscated previous government's corruptly obtained assets. This encouraged officials to stash their wealth abroad, out of reach of any future expropriation. In contrast, Asian administrations such as Suharto's New Order often took a cut on business transactions or provided conditions for development, through infrastructure investment, law and order, etc. 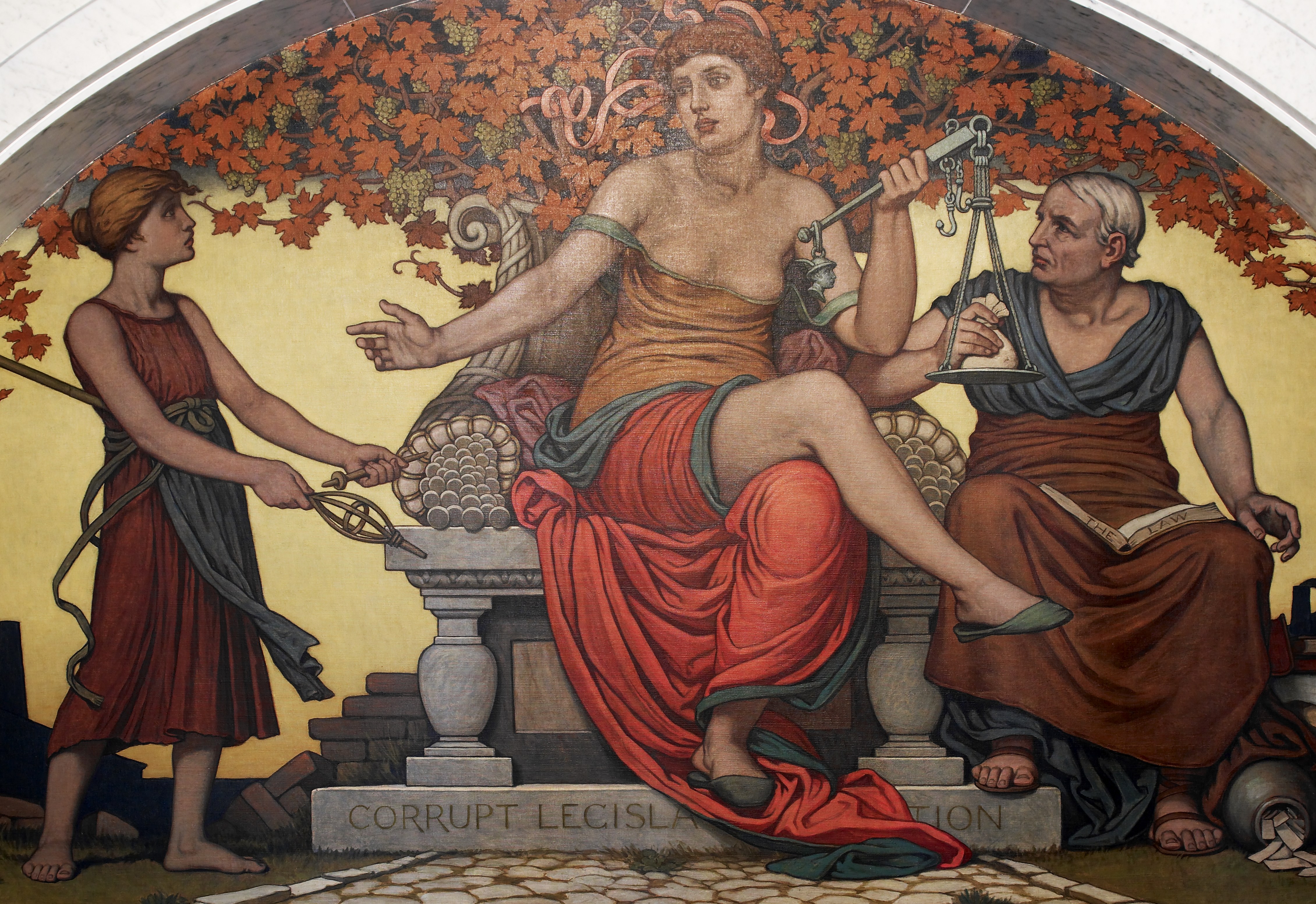 Corruption is often most evident in countries with the smallest per capita incomes, relying on foreign aid for health services. Local political interception of donated money from overseas is especially prevalent in Sub-Saharan African nations, where it was reported in the 2006 World Bank Report that about half of the funds that were donated for health usages were never invested into the health sectors or given to those needing medical attention. Instead, the donated money was expended through "counterfeit drugs, siphoning off of drugs to the black market, and payments to ghost employees". Ultimately, there is a sufficient amount of money for health in developing countries, but local corruption denies the wider citizenry the resource they require. Corruption facilitates environmental destruction. While corrupt societies may have formal legislation to protect the environment, it cannot be enforced if officials can easily be bribed. The same applies to social rights worker protection, unionization prevention, and child labor. Violation of these laws rights enables corrupt countries to gain illegitimate economic advantage in the international market. The Nobel Prize-winning economist Amartya Sen has observed that "there is no such thing as an apolitical food problem." While drought and other naturally occurring events may trigger famine conditions, it is government action or inaction that determines its severity, and often even whether or not a famine will occur. Governments with strong tendencies towards kleptocracy can undermine food security even when harvests are good. Officials often steal state property. In Bihar, India, more than 80% of the subsidized food aid to poor is stolen by corrupt officials. Similarly, food aid is often robbed at gunpoint by governments, criminals, and warlords alike, and sold for a profit. The 20th century is full of many examples of governments undermining the food security of their own nations – sometimes intentionally.

The scale of humanitarian aid to the poor and unstable regions of the world grows, but it is highly vulnerable to corruption, with food aid, construction and other highly valued assistance as the most at risk. Food aid can be directly and physically diverted from its intended destination, or indirectly through the manipulation of assessments, targeting, registration and distributions to favor certain groups or individuals.