Nanjing ( ), formerly romanized as Nanking, is the capital of Jiangsu province of the People's Republic of China and the second largest city in the East China region. With 11 districts, Nanjing, which is located in southwestern Jiangsu, has an administrative area of and a total population of 8,505,500 . Situated in the Yangtze River Delta region, Nanjing has a prominent place in Chinese history and culture, having served as the capital of various Chinese dynasties, kingdoms and republican governments dating from the 3rd century to 1949, and has thus long been a major center of culture, education, research, politics, economy, transport networks and tourism, being the home to one of the world's largest inland ports. The city is also one of the fifteen sub-provincial cities in the People's Republic of China's administrative structure, enjoying jurisdictional and economic autonomy only slightly less than that of a province. Nanjing has been ranked seventh in the evaluation of "Cities with Strongest Comprehensive Strength" issued by the National Statistics Bureau, and second in the evaluation of cities with most sustainable development potential in the Yangtze River Delta. It has also been awarded the title of 2008 Habitat Scroll of Honor of China, Special UN Habitat Scroll of Honor Award and National Civilized City. Nanjing is also considered a Global City with a "Beta" classification, together with Chongqing, Hangzhou and Tianjin according to GaWC, and ranked as one of the world's top 100 cities in the Global Financial Centres Index. Nanjing has many high-quality universities and research institutes, with the number of universities listed in 100 National Key Universities ranking third, including Nanjing University which has a long history and is among the world top 10 universities ranked by Nature Index. The ratio of college students to total population ranks No.1 among large cities nationwide. Nanjing has the eighth-largest scientific research output of any city in the world and has been regarded as one of the world's top three scientific research centers in chemistry (behind Beijing and Shanghai), according to the Nature Index. Nanjing, one of the nation's most important cities for over a thousand years, is recognized as one of the Four Great Ancient Capitals of China. It has been one of the world's largest cities, enjoying peace and prosperity despite wars and disasters. Nanjing served as the capital of Eastern Wu (229–280), one of the three major states in the Three Kingdoms period; the Eastern Jin and each of the Southern dynasties (Liu Song, Southern Qi, Liang and Chen), which successively ruled southern China from 317–589; the Southern Tang (937–75), one of the Ten Kingdoms; the Ming dynasty when, for the first time, all of China was ruled from the city (1368–1421); and the Republic of China under the nationalist Kuomintang (1927–37, 1946–49) prior to its flight to Taiwan by Chiang Kai-Shek during the Chinese Civil War. The city also served as the seat of the rebel Taiping Heavenly Kingdom (1853–64) and the Japanese puppet regime of Wang Jingwei (1940–45) during the Second Sino-Japanese War. It suffered severe atrocities in both conflicts, such as the Nanjing massacre. Nanjing has served as the capital city of Jiangsu province since the establishment of the People's Republic of China. It has many important heritage sites, including the Presidential Palace and Sun Yat-sen Mausoleum. Nanjing is famous for human historical landscapes, mountains and waters such as Fuzimiao, Ming Palace, Chaotian Palace, Porcelain Tower, Drum Tower, Stone City, City Wall, Qinhuai River, Xuanwu Lake and Purple Mountain. Key cultural facilities include Nanjing Library, Nanjing Museum and Jiangsu Art Museum.

The city has a number of other names, and some historical names are now used as names of districts of the city; among them there is the name Jiangning or Kiangning (), whose former character Jiang (, Yangtze) is the former part of the name Jiangsu and latter character Ning (, simplified form ) is the short name of Nanjing. When it was the capital of China, for instance under the ROC, Jing () was adopted as the abbreviation of Nanjing. The city first became a Chinese national capital as early as the Jin dynasty. The name Nanjing, which means "Southern Capital", was officially designated for the city during the Ming dynasty, about six hundred years later. Nanjing is sometimes known as Jinling or Ginling (, "Gold Hill") of the eponymous Ginling College; the old name has been used since the Warring States period in the Zhou dynasty. In English, the spelling Nanking was traditional until Pinyin-developed in the 1950s and internationally adopted in the 1980s- standardized the spelling as "Nanjing".

Archaeological discovery shows that "Nanjing Man" lived more than 500 thousand years ago. Zun, a kind of wine vessel, was found to exist in Beiyinyangying culture of Nanjing in about 5000 years ago. In the late period of Shang dynasty, Taibo of Zhou came to Jiangnan and established Wu state, and the first stop is in Nanjing area according to some historians based on discoveries in Taowu and Hushu culture. According to a legend quoted by an artist in Ming dynasty, Chen Yi, Fuchai, King of the State of Wu, founded a fort named Yecheng in today's Nanjing area in 495BC. Later in 473BC, the State of Yue conquered Wu and constructed the fort of Yuecheng () on the outskirts of the present-day Zhonghua Gate. In 333BC, after eliminating the State of Yue, the State of Chu built Jinling Yi () in the western part of present-day Nanjing. It was renamed Moling () during the reign of the First Emperor of Qin. Since then, the city experienced destruction and renewal many times. The area was successively part of Kuaiji, Zhang and Danyang prefectures in Qin and Han dynasty, and part of Yangzhou region which was established as the nation's 13 supervisory and administrative regions in the 5th year of Yuanfeng in Han dynasty (106BC). Nanjing was later the capital city of Danyang Prefecture, and had been the capital city of Yangzhou for about 400 years from late Han to early Tang.


Capital of the Six Dynasties 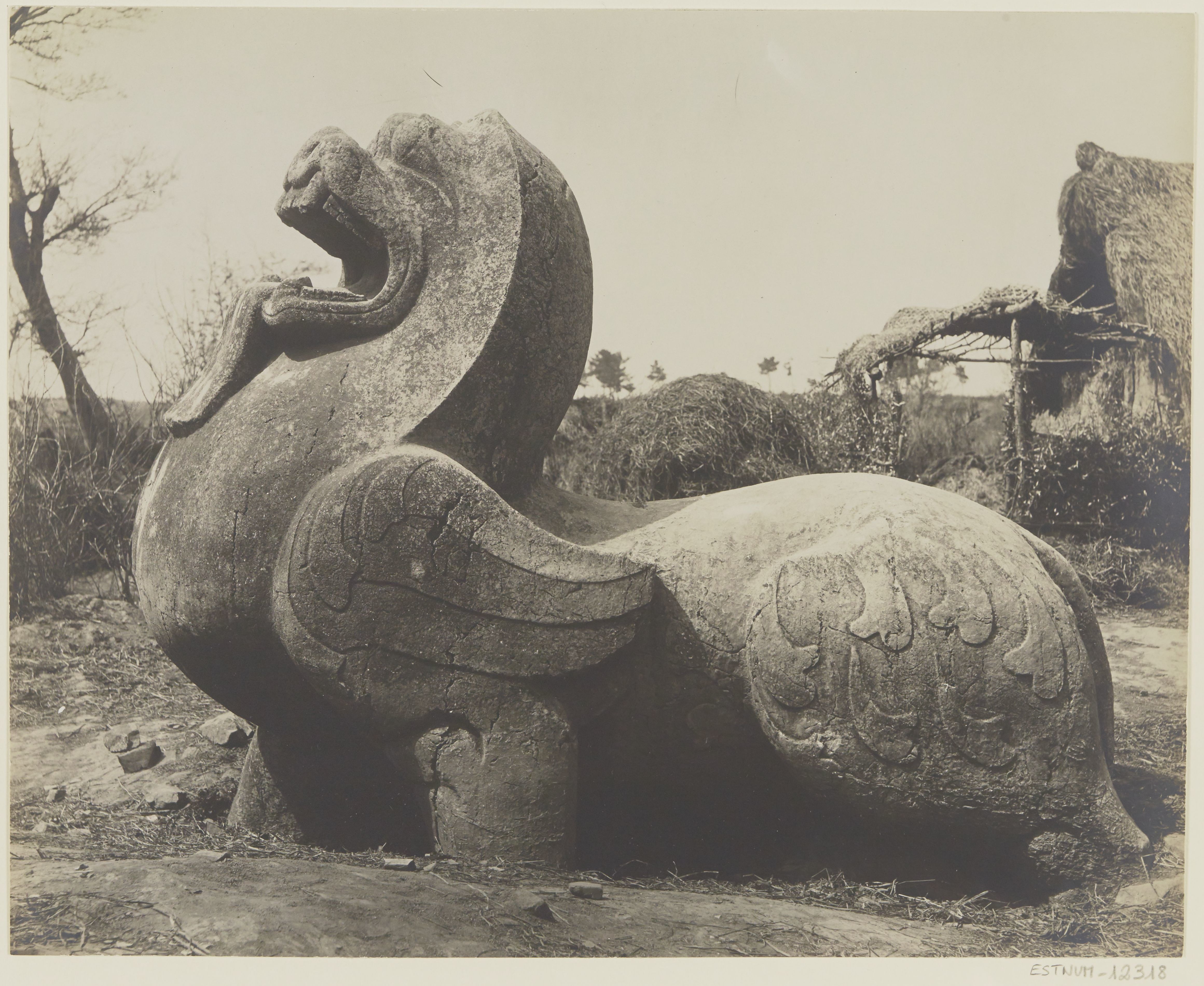 Nanjing first became a state capital in AD229, when the state of Eastern Wu founded by Sun Quan during the Three Kingdoms period relocated its capital to Jianye (), the city extended on the basis of Jinling Yi in AD211. Although conquered by the Western Jin dynasty in 280, Nanjing and its neighboring areas had been well cultivated, developing into one of the commercial, cultural and political centers of China during the Eastern Wu. This city would soon play a vital role in the following centuries. Shortly after the unification of the region, the Western Jin dynasty collapsed. First the rebellions by eight Jin princes for the throne and later rebellions and invasion from Xiongnu and other nomadic peoples that destroyed the rule of the Jin dynasty in the north. In 317, remnants of the Jin court, as well as nobles and wealthy families, fled from the north to the south and reestablished the Jin court in Nanjing, which was then called Jiankang (), replacing Luoyang. This marked the first time a Chinese dynastic capital moved to southern China.

During the period of North–South division, Nanjing remained the capital of the Southern dynasties for more than two and a half centuries. During this time, Nanjing was the international hub of East Asia. Based on historical documents, the city had 280,000 registered households. Assuming an average Nanjing household consisted of about 5.1 people, the city had more than 1.4 million residents. A number of sculptural ensembles of that era, erected at the tombs of royals and other dignitaries, have survived (in various degrees of preservation) in Nanjing's northeastern and eastern suburbs, primarily in Qixia and Jiangning District. Possibly the best preserved of them is the ensemble of the Tomb of Xiao Xiu (475–518), a brother of Emperor Wu of Liang. Six Dynasties is a collective term for six Chinese dynasties mentioned above which all maintained national capitals at Jiankang. The six dynasties were: Eastern Wu (222–280), Eastern Jin dynasty (317–420) and four southern dynasties (420–589).

The period of division ended when the Sui dynasty reunified China and almost destroyed the entire city, turning it into a small town. The city was razed after the Sui took it over. It was renamed Shengzhou () in the Tang dynasty and resuscitated during the late Tang. It was chosen as the capital and called Jinling () during the Southern Tang (937–976), which succeeded the state of Yang Wu. It was renamed Jiangning () in the Northern Song and renamed Jiankang in the Southern Song. Jiankang's textile industry burgeoned and thrived during the Song despite the constant threat of foreign invasions from the north by the Jurchen-led Jin dynasty. The court of Da Chu, a short-lived puppet state established by the Jurchens, and the court of Song were once in the city. The Southern Song were eventually destroyed by the Mongols; during their rule as the Yuan dynasty, the city's status as a hub of the textile industry was further consolidated. According to Odoric of Pordenone, Chilenfu (Nanjing) had 360 stone bridges, which were finer than anywhere else in the world. It was well populated and had a large craft industry.

The first emperor of the Ming dynasty, Zhu Yuanzhang (the Hongwu Emperor), who overthrew the Yuan dynasty, renamed the city Yingtian (), rebuilt it, and made it the dynastic capital in 1368. He constructed a long city wall around Yingtian, as well as a new Ming Palace complex, and government halls. It took 200,000 laborers 21 years to finish the wall, which was intended to defend the city and its surrounding region from coastal pirates. The present-day City Wall of Nanjing was mainly built during that time and today it remains in good condition and has been well preserved. It is among the longest surviving city walls in China. The Jianwen Emperor ruled from 1398 to 1402. It is believed that Nanjing was the largest city in the world from 1358 to 1425 with a population of 487,000 in 1400. In 1421, the Yongle Emperor relocated the capital to Beijing. The city began to be called the 'southern capital' – Nanjing (), in comparison to the capital in the north. His successor, the Hongxi Emperor, wished to revert the relocation of the imperial capital from Nanjing to Beijing that had happened during the Yongle reign. On 24 February 1425, he appointed Admiral Zheng He as the defender of Nanjing and ordered him to continue his command over the Ming treasure fleet for the city's defense.