Click Here for Items Related To - Mitochondrial theory of ageing 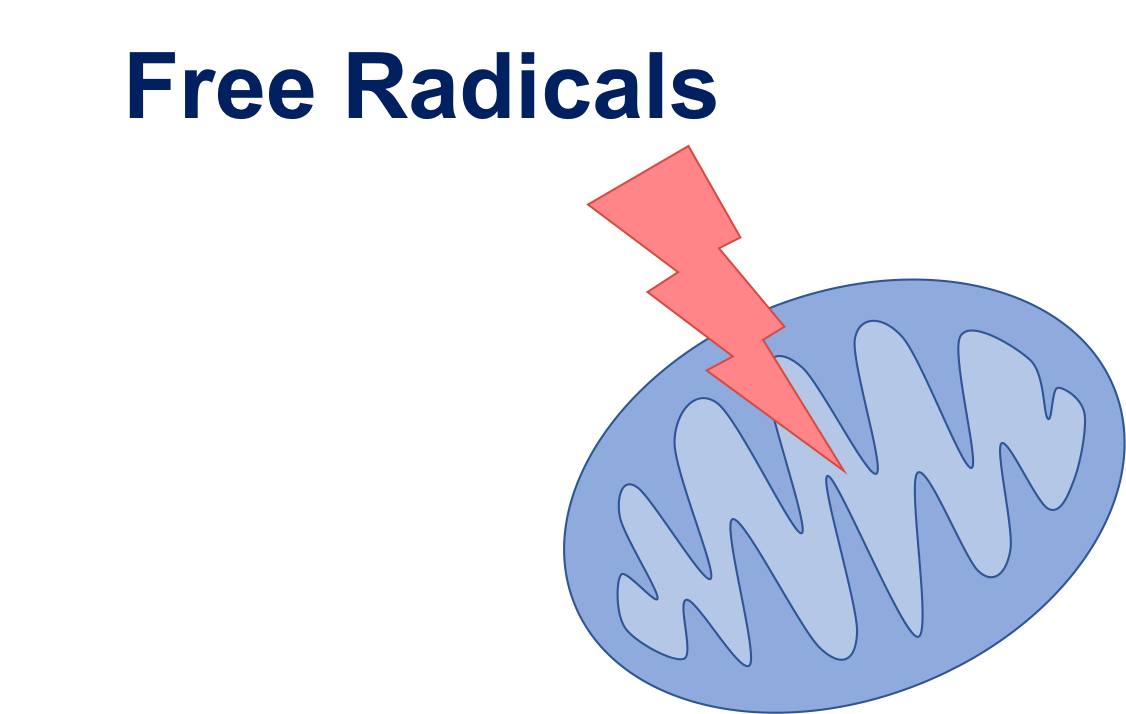 Mitochondria are cell organelles which function to provide the cell with energy by producing ATP (adenosine triphosphate). During ATP production electrons can escape the mitochondrion and react with water, producing reactive oxygen species, ROS for short. ROS can damage macromolecules, including lipids, proteins and DNA, which is thought to facilitate the process of ageing.

In the 1950s Denham Harman proposed the free radical theory of ageing, which he later expanded to the MFRTA. When studying the mutations in antioxidants, which remove ROS, results were inconsistent. However, it has been observed that overexpression of antioxidant enzymes in yeast, worms, flies and mice were shown to increase lifespan. 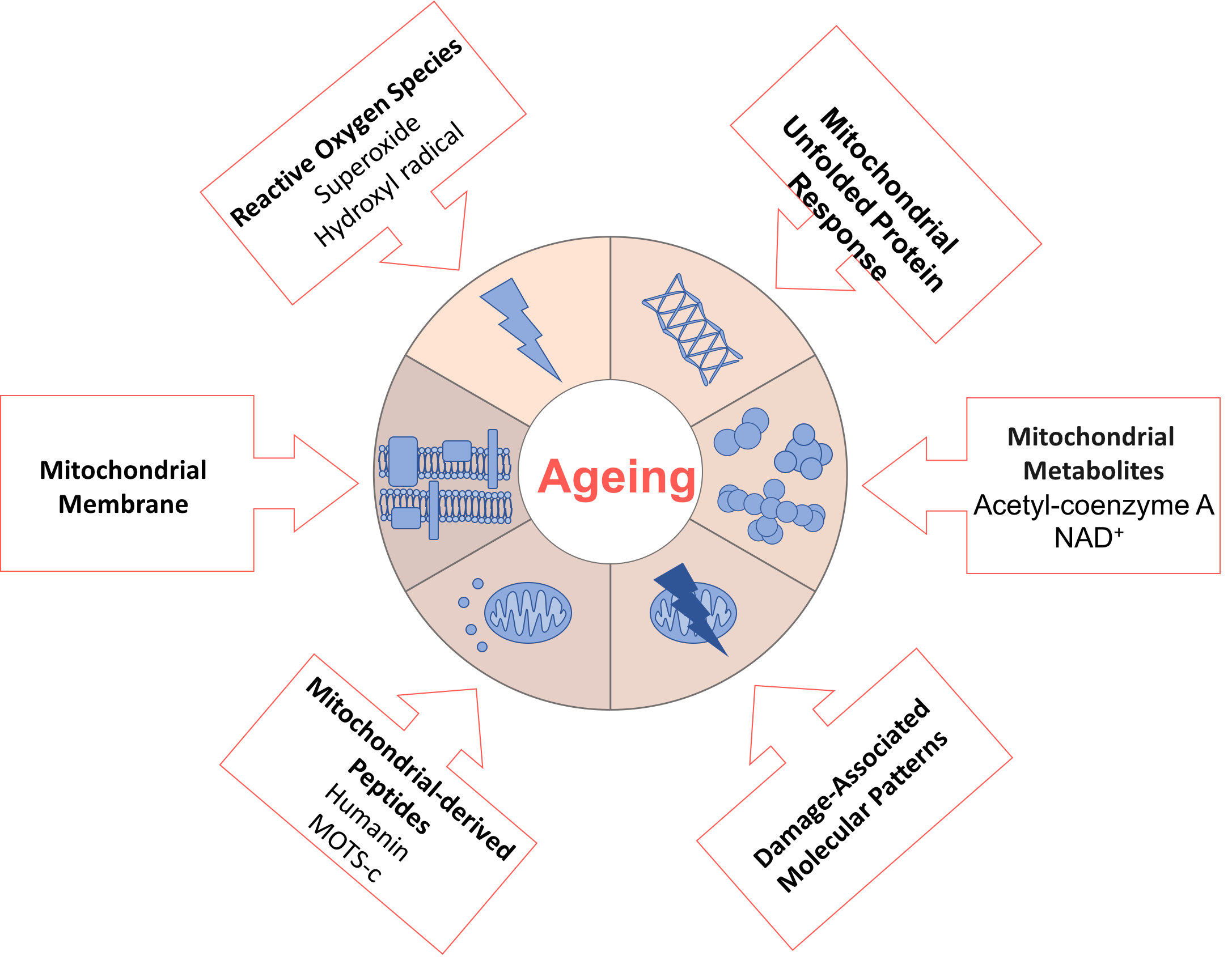 Mitochondria are thought to be organelles that developed from endocytosed bacteria which learned to coexist inside ancient cells. These bacteria maintained their own DNA, the mitochondrial DNA (mtDNA), which codes for components of the electron transport chain (ETC). The ETC is found in the inner mitochondrial membrane and functions to produce energy in the form of ATP molecules. The process is called oxidative phosphorylation, because ATP is produced from ADP in a series of redox reactions. Electrons are transferred through the ETC from NADH and FADH2 to oxygen, reducing oxygen to water.

ROS are highly reactive, oxygen-containing chemical species, which include superoxide, hydrogen peroxide and hydroxyl radical. If the complexes of the ETC do not function properly, electrons can leak and react with water, forming ROS. Normally leakage is low and ROS is kept at physiological levels, fulfilling roles in signaling and homeostasis. In fact, their presence at low levels lead to increased life span, by activating transcription factors and metabolic pathways involved in longevity. At increased levels ROS cause oxidative damage by oxidizing macromolecules, such as lipids, proteins and DNA. This oxidative damage to macromolecules is thought to be the cause of ageing. Mitochondrial DNA is especially susceptible to oxidative damage, due to its proximity to the site of production of these species. Damaging of mitochondrial DNA causes mutations, leading to production of ETC complexes, which don’t function properly, increasing ROS production, increasing oxidative damage to macromolecules.

Acetyl-coenzyme A (Acetyl-CoA) enters the TCA cycle in the mitochondrial matrix, and is oxidized in the process of energy production. Upon escaping the mitochondria and entering the nucleus, it can act as a substrate for histone acetylation. Histone acetylation is an epigenetic modification, which leads to gene activation. At a young age, acetyl-CoA levels are higher in the nucleus and cytosol, and its transport to the nucleus can extend lifespan in worms. Nicotinamide Adenine Dinucleotide (NAD+) is produced in the mitochondria and upon escaping to the nucleus, can act as a substrate for sirtuins. Sirtuins are family of proteins, known to play a role in longevity. Cellular NAD+ levels have been shown to decrease with age.

Damage-associated molecular patterns (DAMPs) are molecules that are released during cell stress. Mitochondrial DNA is a DAMP, which only becomes available during mitochondrial damage. Blood mitochondrial DNA levels become elevated with age, contributing to inflamm-aging, a chronic state of inflammation characteristic of advanced age.

Mitochondrial DNA has been known to encode 13 proteins. Recently, other short protein coding sequences have been identified, and their products are referred to as mitochondria-derived peptides. The mitochondrial-derived peptide, humanin has been shown to protect against Alzheimer’s disease, which is considered an age-associated disease. MOTS-c has been shown to prevent age-associated insulin resistance, the main cause of type 2 diabetes. Humanin and MOTS-c levels have been shown to decline with age, and their activity seems to increase longevity.

In 1956 Denham Harman first postulated the free radical theory of ageing, which he later modified to the mitochondrial free radical theory of ageing (MFRTA). He found ROS as the main cause of damage to macromolecules, known as “ageing”. He later modified his theory because he found that mitochondria were producing and being damaged by ROS, leading him to the conclusion that mitochondria determine ageing. In 1972, he published his theory in the Journal of the American Geriatrics Society.

It has been observed that with age, mitochondrial function declines and mitochondrial DNA mutation increases in tissue cells in an age-dependent manner. This leads to increase in ROS production and potential decrease in the cell’s ability to remove ROS. Most long-living animals have been shown to be more resistant to oxidative damage and have lower ROS production, linking ROS levels to lifespan. Overexpression of antioxidants, which function to remove ROS has also been shown to increase lifespan. Bioinformatics analysis showed that amino acid composition of mitochondrial proteins correlate with longevity (long-living species are depleted in cysteine and methionine), linking mitochondria to the process of ageing. By studying expression of certain genes in ''C. elegans'', ''Drosophila'', and mice it was found that disruption of ETC complexes can extend life – linking mitochondrial function to the process of ageing. Evidence supporting the theory started to crumble in the early 2000s. Mice with reduced expression of the mitochondrial antioxidant, SOD2, accumulated oxidative damage and developed cancer, but did not live longer than normal life. Overexpression of antioxidants reduced cellular stress, but did not increase mouse life span. The naked mole-rat, which lives 10-times longer than normal mice, has been shown to have higher levels of oxidative damage.