The word ''engineer'' was initially used in the context of warfare, dating back to 1325 when ''engine’er'' (literally, one who operates an engine) referred to "a constructor of military engines". In this context, "engine" referred to a military machine, i. e., a mechanical contraption used in war (for example, a catapult). As the design of civilian structures such as bridges and buildings developed as a technical discipline, the term ''civil engineering'' entered the lexicon as a way to distinguish between those specializing in the construction of such non-military projects and those involved in the older discipline. As the prevalence of civil engineering outstripped engineering in a military context and the number of disciplines expanded, the original military meaning of the word "engineering" is now largely obsolete. In its place, the term "military engineering" has come to be used.

The first civilization to have a dedicated force of military engineering specialists were the Romans, whose army contained a dedicated corps of military engineers known as ''architecti''. This group was pre-eminent among its contemporaries. The scale of certain military engineering feats, such as the construction of a double-wall of fortifications long, in just 6 weeks to completely encircle the besieged city of Alesia in 52 B.C.E., is an example. Such military engineering feats would have been completely new, and probably bewildering and demoralizing, to the Gallic defenders. Vitruvius is the best known of these Roman army engineers, due to his writings surviving. In ancient times, military engineers were responsible for siege warfare and building field fortifications, temporary camps and roads. The most notable engineers of ancient times were the Romans and Chinese, who constructed huge siege-machines (catapults, battering rams and siege towers). The Romans were responsible for constructing fortified wooden camps and paved roads for their legions. Many of these Roman roads are still in use today. For about 600 years after the fall of the Roman empire, the practice of military engineering barely evolved in the west. In fact, much of the classic techniques and practices of Roman military engineering were lost. Through this period, the foot soldier (who was pivotal to much of the Roman military engineering capability) was largely replaced by mounted soldiers. It was not until later in the Middle Ages, that military engineering saw a revival focused on siege warfare. Military engineers planned castles and fortresses. When laying siege, they planned and oversaw efforts to penetrate castle defenses. When castles served a military purpose, one of the tasks of the sappers was to weaken the bases of walls to enable them to be breached before means of thwarting these activities were devised. Broadly speaking, sappers were experts at demolishing or otherwise overcoming or bypassing fortification systems. 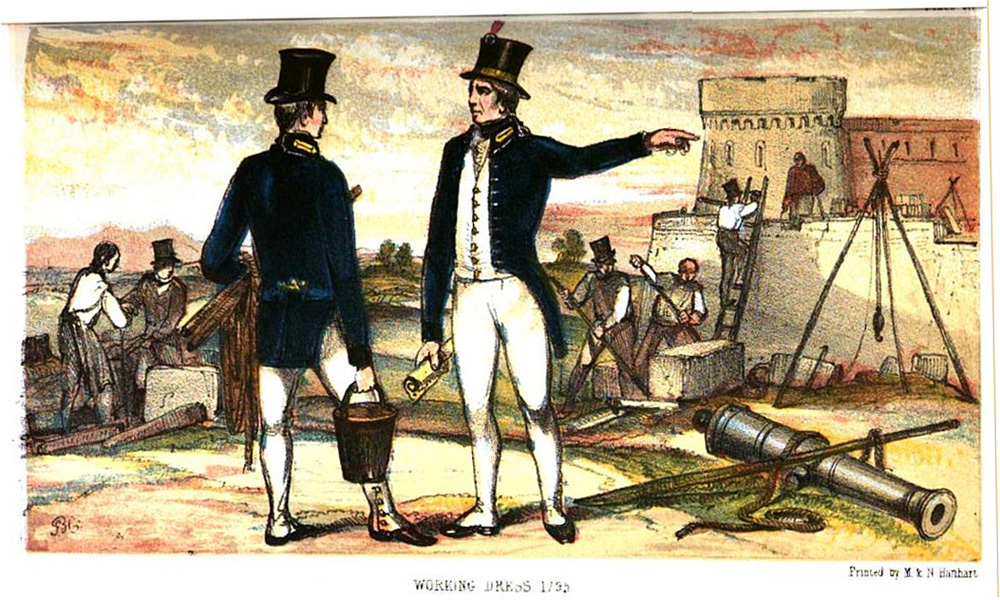 With the 14th-century development of gunpowder, new siege engines in the form of cannons appeared. Initially military engineers were responsible for maintaining and operating these new weapons just as had been the case with previous siege engines. In England, the challenge of managing the new technology resulted in the creation of the Office of Ordnance around 1370 in order to administer the cannons, armaments and castles of the kingdom. Both military engineers and artillery formed the body of this organization and served together until the office's predecessor, the Board of Ordnance was disbanded in 1855. In comparison to older weapons, the cannon was significantly more effective against traditional medieval fortifications. Military engineering significantly revised the way fortifications were built in order to be better protected from enemy direct and plunging shot. The new fortifications were also intended to increase the ability of defenders to bring fire onto attacking enemies. Fort construction proliferated in 16th-century Europe based on the ''trace italienne'' design.

By the 18th century, regiments of foot (infantry) in the British, French, Prussian and other armies included pioneer detachments. In peacetime these specialists constituted the regimental tradesmen, constructing and repairing buildings, transport wagons, etc. On active service they moved at the head of marching columns with axes, shovels, and pickaxes, clearing obstacles or building bridges to enable the main body of the regiment to move through difficult terrain. The modern Royal Welch Fusiliers and French Foreign Legion still maintain pioneer sections who march at the front of ceremonial parades, carrying chromium-plated tools intended for show only. Other historic distinctions include long work aprons and the right to wear beards. The Peninsular War (1808–14) revealed deficiencies in the training and knowledge of officers and men of the British Army in the conduct of siege operations and bridging. During this war low-ranking Royal Engineers officers carried out large-scale operations. They had under their command working parties of two or three battalions of infantry, two or three thousand men, who knew nothing in the art of siegeworks. Royal Engineers officers had to demonstrate the simplest tasks to the soldiers, often while under enemy fire. Several officers were lost and could not be replaced, and a better system of training for siege operations was required. On 23 April 1812 an establishment was authorised, by Royal Warrant, to teach "Sapping, Mining, and other Military Fieldworks" to the junior officers of the Corps of Royal Engineers and the Corps of Royal Military Artificers, Sappers and Miners. The first courses at the Royal Engineers Establishment were done on an all ranks basis with the greatest regard to economy. To reduce staff the NCOs and officers were responsible for instructing and examining the soldiers. If the men could not read or write they were taught to do so, and those who could read and write were taught to draw and interpret simple plans. The Royal Engineers Establishment quickly became the centre of excellence for all fieldworks and bridging. Captain Charles Pasley, the director of the Establishment, was keen to confirm his teaching, and regular exercises were held as demonstrations or as experiments to improve the techniques and teaching of the Establishment. From 1833 bridging skills were demonstrated annually by the building of a pontoon bridge across the Medway which was tested by the infantry of the garrison and the cavalry from Maidstone. These demonstrations had become a popular spectacle for the local people by 1843, when 43,000 came to watch a field day laid on to test a method of assaulting earthworks for a report to the Inspector General of Fortifications. In 1869 the title of the Royal Engineers Establishment was changed to "The School of Military Engineering" (SME) as evidence of its status, not only as the font of engineer doctrine and training for the British Army, but also as the leading scientific military school in Europe. The dawn of the internal combustion engine marked the beginning of a significant change in military engineering. With the arrival of the automobile at the end of the 19th century and heavier than air flight at the start of the 20th century, military engineers assumed a major new role in supporting the movement and deployment of these systems in war. Military engineers gained vast knowledge and experience in explosives. They were tasked with planting bombs, landmines and dynamite. At the end of World War I, the standoff on the Western Front caused the Imperial German Army to gather experienced and particularly skilled soldiers to form "Assault Teams" which would break through the Allied trenches. With enhanced training and special weapons (such as flamethrowers), these squads achieved some success, but too late to change the outcome of the war. In early WWII, however, the Wehrmacht "Pioniere" battalions proved their efficiency in both attack and defense, somewhat inspiring other armies to develop their own combat engineers battalions. Notably, the attack on Fort Eben-Emael in Belgium was conducted by Luftwaffe glider-deployed combat engineers. The need to defeat the German defensive positions of the "Atlantic wall" as part of the amphibious landings in Normandy in 1944 led to the development of specialist combat engineer vehicles. These, collectively known as Hobart's Funnies, included a specific vehicle to carry combat engineers, the Churchill AVRE. These and other dedicated assault vehicles were organised into the specialised 79th Armoured Division and deployed during Operation Overlord – 'D-Day'. Other significant military engineering projects of World War II include Mulberry harbour and Operation Pluto. Modern military engineering still retains the Roman role of building field fortifications, road paving and breaching terrain obstacles. A notable military engineering task was, for example, breaching the Suez Canal during the Yom Kippur War.

Military engineers can come from a variety of engineering programs. They may be graduates of mechanical, electrical, civil, or industrial engineering.

Modern military engineering can be divided into three main tasks or fields: combat engineering, strategic support, and ancillary support. Combat engineering is associated with engineering on the battlefield. Combat engineers are responsible for increasing mobility on the front lines of war such as digging trenches and building temporary facilities in war zones. Strategic support is associated with providing service in communication zones such as the construction of airfields and the improvement and upgrade of ports, roads and railways communication. Ancillary support includes provision and distribution of maps as well as the disposal of unexploded warheads. Military engineers construct bases, airfields, roads, bridges, ports, and hospitals. During peacetime before modern warfare, military engineers took the role of civil engineers by participating in the construction of civil-works projects. Nowadays, military engineers are almost entirely engaged in war logistics and preparedness.

Explosives are defined as any system that produces rapidly expanding gases in a given volume in a short duration. Specific military engineering occupations also extend to the field of explosives and demolitions and their usage on the battlefield. Explosive devices have been used on the battlefield for several centuries, in numerous operations from combat to area clearance. Earliest known development of explosives can be traced back to 10th century China where the Chinese are credited with engineering the world's first known explosive, black powder.Initially developed for recreational purposes, black powder later was utilized for military application in bombs and projectile propulsion in firearms. Engineers in the military who specialize in this field formulate and design many explosive devices to use in varying operating conditions. Such explosive compounds range from black powder to modern plastic explosives.This particular is commonly listed under the role of combat engineers who demolitions expertise also includes mine and IED detection and disposal. For more information, see Bomb disposal.

Military engineers are key in all armed forces of the world, and invariably found either closely integrated into the force structure, or even into the combat units of the national troops.