, sometimes abbreviated to , is rock music from Japan. Influenced by American and British rock of the 1960s, the first rock bands in Japan performed what is called Group Sounds, with lyrics almost exclusively in English. Folk rock band Happy End in the early 1970s are credited as the first to sing rock music in the Japanese language. Punk rock bands Boøwy and The Blue Hearts and hard rock/heavy metal groups X Japan and B'z led Japanese rock in the late 1980s and early 1990s by achieving major mainstream success. Japanese rock music has received recognition worldwide, being widely known in Asia, and has survived through decades competing with its contemporary local style J-pop. Rock bands such as B'z and Mr. Children are among the best selling music acts in Japan. The demand for rock in Japan is so huge that festivals mainly focused on it like the Fuji Rock Festival have been introduced since the late 90s with attendances reaching a peak of 200,000 people per festival making it the largest outdoor music event in the country.

Rockabilly had a brief surge in popularity in Japan during the late 1950s. Suppressed by authorities, elements of it nevertheless managed to reach the mainstream through singers such as Kyu Sakamoto. In the 1960s, many Japanese rock bands were influenced by Western rock musicians such as the Beatles, Bob Dylan, and the Rolling Stones, along with other Appalachian folk music, psychedelic rock, mod and similar genres: a phenomenon that was called Group Sounds (G.S.). John Lennon of the Beatles later became one of the most popular Western musicians in Japan. By the late 1960s, Group Sounds bands such as The Tempters, the Tigers, the Golden Cups, the Ox, the Village Singers, the Carnabeats, the Mops, the Jaguars, the Wild Ones and the Spiders had big hits. After the boom of Group Sounds, there were several folk singer-songwriters. They were influenced by Bob Dylan and American folk music. The Tigers were the most popular Group Sounds band in the era. Later, some of the members of the Tigers, the Tempters, and the Spiders formed the first Japanese supergroup, Pyg. 70s "New Rock" group such as the Power House, the Blues Creation, Murasaki, Condition Green, and Bow Wow released rock albums. After seeing a show by then-upcoming artist Jimi Hendrix during a visit to Europe, Yuya Uchida returned home and formed Yuya Uchida & the Flowers in November 1967 in order to introduce a similar sound to Japan.

left|Loudness performing in Hamburg, 2010. Uchida replaced every member of The Flowers except its drummer and renamed them the Flower Travellin' Band for October 1970's ''Anywhere'', which includes covers of heavy metal band Black Sabbath and progressive rock act King Crimson. They moved to Canada and published their first album of original material, ''Satori'' which was released in April 1971 and is now considered a progenitor of heavy metal music and, together with ''Kirikyogen'', doom metal. Japanese heavy metal bands started emerging in the late 1970s, pioneered by Bow Wow (1975), 44 Magnum (1977) and Earthshaker (1978). In 1977, Bow Wow supported Aerosmith and Kiss on their Japanese tours. They performed at both the Montreux Jazz Festival in Switzerland and the Reading Festival in England in 1982. After some member changes resulted in a more commercial sound, they changed their name to Vow Wow and relocated to England. Their 1989 album ''Helter Skelter'' reached number 75 on the UK Albums Chart. In the 1980s, a plethora of Japanese heavy metal bands formed. Loudness was formed in 1981 by former Lazy members Akira Takasaki and Munetaka Higuchi. In 1983, they toured the United States and Europe and soon started focusing more on an international career. In a 1985 deal with Atco Records, Loudness became the first Japanese metal act signed to a major label in the United States. Their albums ''Thunder in the East'' (1985), ''Lightning Strikes'' (1986) and ''Hurricane Eyes'' (1987) reached numbers 74, 64 and 190 on the ''Billboard'' chart. Loudness replaced singer Minoru Niihara with American vocalist Michael Vescera in 1988, in an unsuccessful attempt to further their international popularity. Loudness were famous among heavy metal fans in the United States. In the eighties few bands had a female members, like all-female band Show-Ya fronted by Keiko Terada, and Terra Rosa with Kazue Akao on vocals. In September 1989, Show-Ya's album ''Outerlimits'' was released, it reached number 3 in the Oricon album chart.

Happy End is credited as the first rock band to sing in the Japanese language. Their self-titled debut album was released in August 1970 on the experimental record label URC (Underground Record Club). This album marked an important turning point in Japanese music history, as it sparked what would be known as the . There were highly publicized debates held between prominent figures in the rock industry, most notably the members of Happy End and Yuya Uchida, regarding whether Japanese rock music sung entirely in Japanese was sustainable. The success of Happy End's debut album and their second, ''Kazemachi Roman'' released in November 1971, proved the sustainability of Japanese-language rock music in Japan. Carol (led by Eikichi Yazawa), RC Succession and Funny Company were especially famous and helped define the sound. Sometimes also beginning in the late sixties, but mostly active in the seventies, are musicians mixing rock music with American-style folk and pop rock elements. Folk rock musicians such as Tulip, Banban, Garo, Yosui Inoue were popular in music scene. 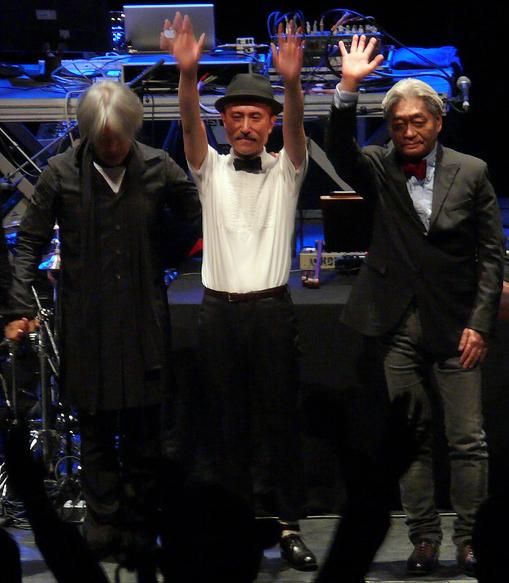 Early examples of Japanese punk rock include SS, the Star Club, the Stalin, Inu, Gaseneta, Bomb Factory, Lizard (who were produced by the Stranglers) and Friction (whose guitarist Reck had previously played with Teenage Jesus and the Jerks before returning to Tokyo) and the Blue Hearts. The early punk scene was immortalized on film by Sogo Ishii, who directed the 1982 film ''Burst City'' featuring a cast of punk bands/musicians and also filmed videos for The Stalin. The independent scene also included a diverse number of alternative/post-punk/new wave artists such as Aburadako, P-Model, Uchoten, Auto-Mod, Buck-Tick, Guernica and Yapoos (both of which featured Jun Togawa), G-Schmitt, Totsuzen Danball, and Jagatara, along with noise/industrial bands such as Hijokaidan and Hanatarashi. In the 1980s, acts such as Boøwy inspired what is called the , popularizing the formation of rock groups. In 1980, Huruoma and Ry Cooder, an American musician, collaborated on a rock album with Shoukichi Kina, driving force behind the aforementioned Okinawan band Champloose. They were followed by Sandii & the Sunsetz, who further mixed Japanese and Okinawan influences. Alternative rock bands like Shonen Knife, Boredoms and The Pillows formed. Nirvana's Kurt Cobain admitted to be a fan of Shonen Knife during the girls' tour in the LA in 1991. Cobain later asked the band to join them in a tour in the U.S. to which Shonen Knife accepted.

Also during the 1980s, Japanese metal and rock bands gave birth to the movement known as visual kei. Taking visual influence from Western glam rock and glam metal, it was pioneered by bands like X Japan, Dead End, Buck-Tick, D'erlanger, and Color. Although starting in the early 1980s, it was not until the tail-end of the decade that visual kei acts saw major success. Buck-Tick's 1988 album Seventh Heaven reached number 3 on the Oricon chart, and its follow-ups ''Taboo'' (1989) and ''Aku no Hana'' (1990) both topped it. In April 1989, X Japan's second album ''Blue Blood'' reached number 6 and sold 712,000 copies. Their third and best-selling album ''Jealousy'' was released in July 1991, topped the charts and sold over 1 million copies. They released two more number one studio albums, ''Art of Life'' (1993) and ''Dahlia'' (1996), before disbanding in 1997. X Japan signed an American record deal with Atlantic Records in 1992, but an international release never happened. In the 1990s, Luna Sea and Glay sold millions of records, while Malice Mizer, La'cryma Christi, and Siam Shade also found success.

In the 1990s, Japanese rock musicians such as B'z, Mr. Children, Glay, Southern All Stars, Malice Mizer, Shazna, Janne Da Arc, L'Arc-en-Ciel, Tube, Spitz, Wands, T-Bolan, Judy and Mary, Asian Kung–Fu Generation, Deen, Lindberg, Sharam Q, the Yellow Monkey, the Brilliant Green and Dragon Ash achieved commercial success. B'z is the best selling artist in Japan with over 86 million confirmed records sold and they are speculated to have sold 100 million worldwide. The duo are also the first Asian band to be inducted in the Hollywood's RockWalk. In the 1990s, anime was becoming the best-selling genres of music in Japan. The rise of disposable pop has been linked with the popularity of karaoke, leading to criticism that it is consumerist: Kazufumi Miyazawa of the Boom said "I hate that buy, listen, and throw away and sing at a karaoke bar mentality." Visual kei band Luna Sea gained hit song "I For You"(TV drama theme). Ska-punk bands of the late nineties extending in the years 2000 include Shakalabbits and 175R.