Click Here for Items Related To - Jammu and Kashmir (state)


Jammu and Kashmir was a state of India from 1954 to 2019, constituting the southern and southeastern portion of the larger Kashmir region, which has been the subject of a dispute between India, Pakistan and China since the mid-20th century. The underlying region of this state were parts of the former princely state of Jammu and Kashmir, whose western districts, now known as Azad Kashmir, and northern territories, now known as Gilgit-Baltistan, are administered by Pakistan. The Aksai Chin region in the east, bordering Tibet, has been under Chinese control since 1962. After the Government of India repealed the special status accorded to Jammu and Kashmir under Article 370 of the Indian constitution in 2019, the Parliament of India passed the Jammu and Kashmir Reorganisation Act, which contained provisions that dissolved the state and reorganised it into two union territories – Jammu and Kashmir in the west and Ladakh in the east, with effect from 31 October 2019. At the time of its dissolution, Jammu and Kashmir was the only state in India with a Muslim-majority population.

After the Indo-Pakistani War of 1947–1948, the princely state of Jammu and Kashmir was divided between India (which controlled the regions of Jammu, Kashmir Valley, and Ladakh) and Pakistan (which controlled Gilgit–Baltistan and Azad Kashmir). The Indian-administered territories elected a constituent assembly in 1951, which ratified the accession of the state to India in 1954. In 1956–57, China constructed a road through the disputed Aksai Chin area of Ladakh. India's belated discovery of this road culminated in the Sino-Indian War of 1962; China has since administered Aksai Chin. Following the Indo-Pakistani War of 1971, India and Pakistan signed the Simla Agreement, recognising a Line of Control in Kashmir, and committing to a peaceful resolution of the dispute through bilateral negotiations.

In the late 1980s, discontent over the high-handed policies of the union government and allegations of the rigging of the 1987 Jammu and Kashmir Legislative Assembly election triggered a violent uprising and armed insurgency which was backed by Pakistan. Pakistan claimed to be giving its "moral and diplomatic" support to the separatist movement. The Inter-Services Intelligence of Pakistan has been accused by India and the international community of supporting, supplying arms and training mujahideen, to fight in Jammu and Kashmir. In 2015, former President of Pakistan Pervez Musharraf admitted that Pakistan had supported and trained insurgent groups in the 1990s. India has repeatedly called Pakistan to end its "cross-border terrorism" in Kashmir. Since 1989, a prolonged, bloody conflict between the Islamic militant separatists and the Indian Army took place, both of whom have been accused of widespread human rights abuses, including abductions, massacres, rapes and armed robbery. Several new militant groups with radical Islamic views emerged and changed the ideological emphasis of the movement to Islamic. This was facilitated by a large influx of Islamic "Jihadi" fighters (mujahadeen) who had entered the Kashmir valley following the end of the Soviet–Afghan War in the 1980s. 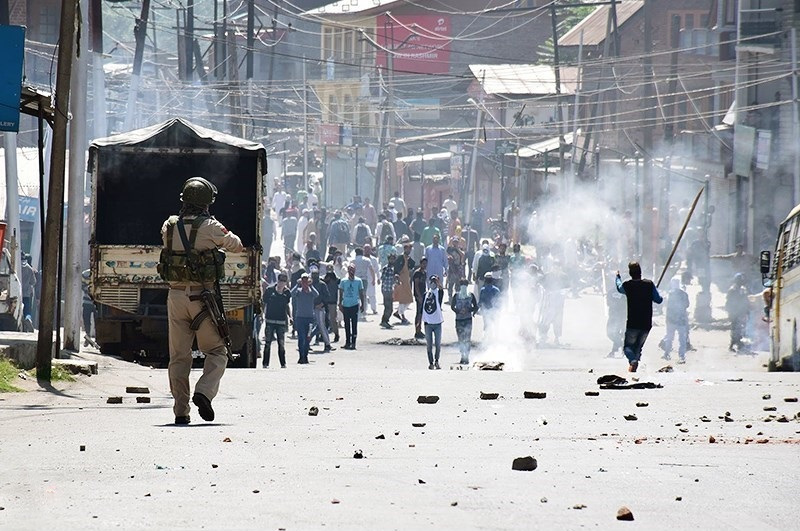 Following the 2008 Kashmir unrest, secessionist movements in the region were boosted. The 2016–17 Kashmir unrest resulted in the death of over 90 civilians and the injury of over 15,000. Six policemen, including a sub-inspector were killed in an ambush in Anantnag in June 2017, by trespassing militants of the Pakistan-based Lashkar-e-Toiba. An attack on an Indian police convoy in Pulwama, in February 2019, resulted in the deaths of 40 police officers. Responsibility for the attack was claimed by a Pakistan-backed militant group Jaish-e-Mohammed.

In August 2019, both houses of the Parliament of India passed resolutions to amend Article 370 and extend the Constitution of India in its entirety to the state, which was implemented as a constitutional order by the President of India. At the same time, the parliament also passed the Jammu and Kashmir Reorganisation Act, 2019, which contained provisions that dissolved the state of Jammu and Kashmir and established two new union territories: the eponymous union territory of Jammu and Kashmir, and that of Ladakh. The reorganisation act was assented to by the President of India, and came into effect on 31 October 2019. Prior to these measures, the union government locked down the Kashmir Valley, increased security forces, imposed Section 144 that prevented assembly, and placed political leaders such as former Jammu and Kashmir chief ministers Omar Abdullah and Mehbooba Mufti under house arrest. Internet and phone services were also blocked.

The state of Jammu and Kashmir consisted of three divisions: the Jammu Division, the Kashmir Division and Ladakh which are further divided into 22 districts. The Siachen Glacier, while under Indian military control, did not lie under the administration of the state of Jammu and Kashmir. Kishtwar, Ramban, Reasi, Samba, Bandipora, Ganderbal, Kulgam and Shopian were districts formed in 2008.