The Indian Forest Service (IFS) is one of the three All India Services of the Government of India and under Natural Resource Service. The other two civil service being the Indian Administrative Service and the Indian Police Service. It was constituted in the year 1966 under the All India Services Act, 1951, by the Government of India. The service implements the National Forest Policy in order to ensure the ecological stability of the country through the protection and participatory sustainable management of natural resources. The members of the service also manage the National Parks (NP) Tiger Reserve (TR), Wildlife Sanctuaries (WLS) and other Protected Areas (PA) of the country. A Forest Service officer is wholly independent of the district administration and exercises administrative, judicial and financial powers in their own domain. Positions in state forest department, such as District/Divisional Forest Officer (DFO), Conservator of Forests (CF) , Chief Conservator of Forests (CCF) and Principal Chief Conservator of Forests (PCCF) etc., are held only by Forest Service officers. The highest-ranking Forest Service official in each state is the Head of Forest Forces (HoFF). Earlier, the British Government in India had constituted the Imperial Forest Service (IFS) in 1867 which functioned under the Federal Government until the Government of India Act 1935 was passed and responsibility was transferred to the provinces. Administration of the Service is the responsibility of the Ministry of Environment, Forest and Climate Change.

The modern Indian Forest Service was established in 1966, after independence, under the All India Services Act 1951. The first Inspector General of Forests, Hari Singh, was instrumental in the development of the Forest Service. India has an area of 635,400 km2 designated as forests, about 19.32% of the country. India's forest policy was created in 1894 and revised in 1952 and again in the year 1988.

Officers are recruited through an open competitive examination conducted by the UPSC and then trained for about two years by the Central Government at Indira Gandhi National Forest Academy. Their services are placed under various State cadres and joint cadres, being an All India Service they have the mandate to serve both under the State and Central Governments. They are eligible for State and Central deputations as their counterpart IAS and IPS officers. Deputation of Forest Service officers to the Central Government includes appointments in Central Ministries at the position of Deputy Secretary, Director, Joint Secretary and Additional Secretary etc.; appointments in various Public Sector Units, Institutes and Academies at the position of Chief Vigilance Officer (CVO), Regional passport officers, Managing Directors, Inspector General, Director General etc.

After the Indian Administrative Services, the Indian Forest Service (IFS) has the highest number of officers posted as Joint Secretaries, Additional Secretaries and Secretaries 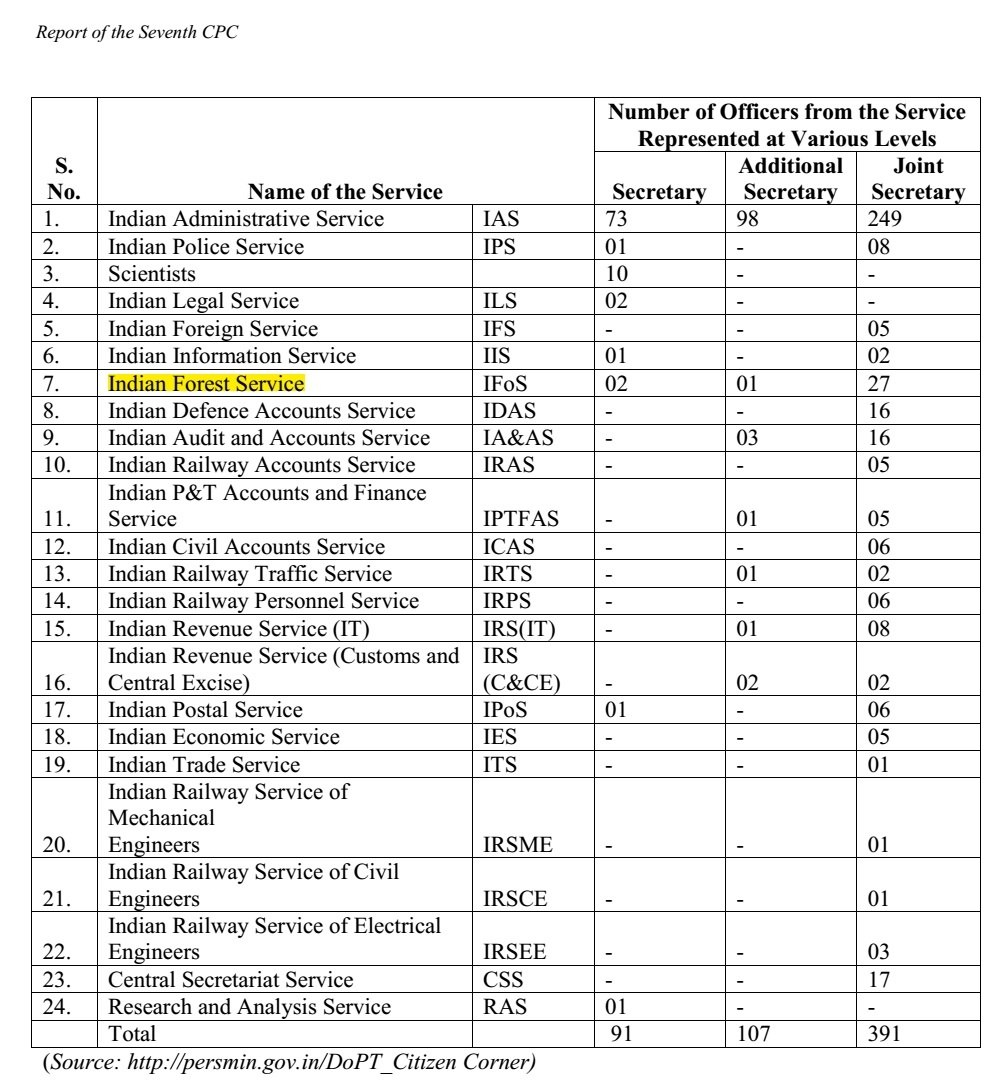 to the Government of India, There are two Central Staffing Schemes, one each controlled by Ministry of Environment , Forests and Climate Change (India) (MoEFCC) and Department of Personnel & Training (DoPT) of Ministry of Personnel, Public Grievances and Pensions and they are respectively called as CSS of MoEFCC and CSS of DoPT. Manning the pre-identified professional positions in the Ministry, its regional offices, subordinate offices, organisations under its control (located elsewhere in the country), and in other Ministries/Departments, exclusively by Forest Service, CSS of MoEFCC scheme has been formulated. The posts included under it are Director General of Forests, Additional Director General of Forests, Inspector General of Forests and Deputy Inspector General of Forests in Ministry of Environment, Forests and Climate Change, Associate Professors and Lecturers in IGNFA, Director of Forest Survey of India, Indira Gandhi National Forest Academy, Project Tiger, Project Elephant, National Zoological Park, Forest Education and Deputy Directors/Conservators in Regional offices of the Ministry. Similar to the CSS of the MoEFCC, for manning pre-identified positions of Under Secretary (US), Deputy Secretary (DS), Director, Joint Secretary to Government of India (JS), Additional Secretary (AS), Special Secretary (SS) and equivalent levels in the Government of India and its organizations, DoPT has formulated a staffing Scheme. A total of 38 Civil Services including the three All India Services are participants under this Scheme. Similar to the CSS, there are two Non-CSSs under the Government of India one each controlled by the MoEFCC and DoPT. All posts to be filled up by Forest Service officers in the autonomous bodies under the control of the Ministry viz ICFRE, Dehradun; Wild Life Institute of India, Dehradun and Indian Institute of Forest Management, Bhopal; Wild-Life Crime Control Bureau, Central Pollution Control Board, Central Zoo Authority, etc. are called as non-CSS posts. Isolated posts under various Departments and Ministries in the Government of India and the posts of Commissions, Autonomous Bodies, Authorities, Trusts, Boards, Societies, etc. constitute non-CSS of DoPT.

An Indian Forest Service officer (IFS) may also be deputed for service under a company, association, corporation which is wholly or substantially owned or controlled by a State Government, a Municipal Corporation, or Local Body. The appointment is done by the State Government.

A Forest Service officer may also be deputed for service under an international organisation by Central Government in consultation with the State Government of India.

IFS officers are recruited via an open competitive examination conducted by the UPSC and then trained for about two years by the Central Government at Indira Gandhi National Forest Academy. Their services are placed under various State cadres and joint cadres, even though they have the mandate to serve both under the State and Central Governments.

On acceptance to the Forest Service, new entrants undergo a probationary period (and are referred to as Officer Trainees). Training begins at the Lal Bahadur Shastri National Academy of Administration in Mussoorie, where members of many elite civil services are trained for the period of 15 weeks. On completion of which they go to the Indira Gandhi National Forest Academy at Dehradun, for a more intensive training in a host of subjects important to Forestry, Wildlife Management, Biodiversity, Environment Protection, Climate Change, Forest Policies and Laws, Remote Sensing and GIS, Forest Dwellers and Scheduled Tribes. After completion of their training, the officers are awarded a master's degree in Science (Forestry) of Forest Research Institute. The officers are taught more than 56 subjects of life sciences in these two years. They are also taught Weapon handling, Horse riding, Motor Vehicle Training, Swimming, Forest and Wildlife Crime Detection. They also go on attachments with different government bodies and institutes such as Indian Military Academy, Sardar Vallabhbhai Patel National Police Academy, Wildlife Institute of India, Bombay Natural History Society etc. They also undertake extensive tours both in India and abroad.

The Union Government announced a new cadre allocation policy for the All India Services in August 2017. Under the new policy, a candidate has to rank the five zones in order of preference. Subsequently, the candidate has to indicate one preference of cadre from each preferred zone. The candidate indicates their second cadre preference for every preferred zone subsequently. The process continues till a preference for all the cadres is indicated by the candidate. Officers continue to work in the cadre they are allotted or are deputed to the Government of India.

Till 2008 there was no system of preference of state cadre by the candidates; the candidates, if not placed in the insider vacancy of their home states, were allotted to different states in alphabetic order of the roster, beginning with the letters A, H, M, T for that particular year. For example, if in a particular year the roster begins from 'A', which means the first candidate on the roster will go to the Andhra Pradesh state cadre of the Forest Service, the next one to Bihar, and subsequently to Chhattisgarh, Gujarat, and so on in alphabetical order. The next year the roster starts from 'H', for either Haryana or Himachal Pradesh (if it has started from Haryana on the previous occasion when it all started from 'H', then this time it would start from Himachal Pradesh). This highly intricate system, in vogue since the mid-1980s, had ensured that officers from different states are placed all over India. The system of permanent State cadres has also resulted in wide disparities in the kind of professional exposure for officers, when we compare officers in small and big and also developed and backward states. Changes of state cadre was permitted on grounds of marriage to an All India Service officer of another state cadre or under other exceptional circumstances. The officer may go to their home state cadre on deputation for a limited period, after which one has to invariably return to the cadre allotted to him or her. From 2008 to 2017 Forest Service officers were allotted to State cadres at the beginning of their service. There was one cadre for each Indian state, except for two joint cadres: Assam–Meghalaya and Arunachal Pradesh–Goa–Mizoram–Union Territories (AGMUT). The "insider-outsider ratio" (ratio of officers who were posted in their home states) is maintained as 1:2, with one-third of the direct recruits as 'insiders' from the same state. The rest were posted as outsiders according to the 'roster' in states other than their home states, as per their preference.

The Principal Chief Conservator of Forests (Hindi: प्रधान मुख्य वन संरक्षक) is the highest-ranking officer belonging to the Indian Forest Service who is responsible for managing the Forests, Environment and Wild-Life related issues of a state of India. It is the highest rank of an officer of the Indian Forest Service in a State. The Principal Chief Conservator reports to the Principal Secretary of the concerned ministry in the State Government. At times the states may have more than one post of PCCF and in that case, one of them is designated as the Head of Forestry Force (HOFF). HOFF is on the pay scale of ₹2,25,000 fix. HOFF/PCCF is supported by APCCFs, Chief Conservator of Forests (CCF), Conservator of Forests (CFs), and field level functionaries, such as DFOs and Range Forest officers (RFOs) in their work. PCCF is equivalent to Director General of Police and Chief Secretary in Rank

The National Commission for Scheduled Tribes has proposed the idea of renaming the Indian Forest Service as the ‘Indian Forest and Tribal Service’.

Died in the line of duty