Hippos ( grc|Ἵππος, "horse") is an archaeological site in the Israel-Syria DMZ, on a hill in the northern Jordan Valley overlooking the Sea of Galilee. Between the 3rd century BCE and the 8th century CE, Hippos was the site of a Greco-Roman city, which declined towards the end of the Byzantine period and the Ealy Muslim period, and was abandoned after an earthquake in 749. Besides the fortified city itself, Hippos controlled two port facilities on the lake and an area of the surrounding countryside. Hippos was part of the Decapolis, or Ten Cities, a region in Roman Jordan, Syria and Israel that were culturally tied more closely to Greece and Rome than to the Semitic ethnoi around. Founded as a polis by the name ''Antioch of Hippos'' () during the Seleucids, the city is named after the Greek language word for horse, ''Hippos'', and a common name of Seleucid monarchs, ''Antiochus''. In the 3rd-century Mosaic of Rehob, the site is known by its Aramaic name, Sussita ( he|סוסיתא), a word meaning "horse" in the feminine gender, while the Arabic name, Qal'at al-Hisn or Husn, has been used by the country's Arab inhabitants, meaning, "Fortress of the Horse/Stallion". Other names include the alternate spelling Hippus (Accusative Hippum), a Latinized version of the Greek name. The precise reason why the city received this name is unknown.

Hippos was built on a flat-topped foothill east of and above the Sea of Galilee, above sea level, near modern Kibbutz Ein Gev. The site is just on the Israeli side of the 1949 UN-demarcated ceasefire line between Syria and Israel.

Hippos traces from as early as 1 CE. The site was again inhabited in the third century BCE by the Ptolemies, though whether it was an urban settlement or a military outpost is still unknown. During this time, Coele-Syria served as the battleground between two dynasties descending from captains of Alexander the Great, the Ptolemies and the Seleucids. It is likely that Hippos, on a very defensible site along the border lines of the 3rd century BCE, was founded as a border fortress for the Ptolemies. The city of Hippos itself was established by Seleucid colonists, most likely in the middle of the second century BCE. Its full name, ''Antiochia Hippos'' ( la|Antiocheia ad Hippum), reflects a Seleucid founding. As the Seleucids took possession of all of Coele-Syria, Hippos grew into a full-fledged polis, a city-state with control over the surrounding countryside. Antiochia Hippos was improved with all the makings of a Greek polis: a temple, a central market area, and other public structures. The availability of water limited the size of Hellenistic Hippos. The citizens relied on rain-collecting cisterns for all their water; this kept the city from supporting a very large population.

The Maccabean revolt resulted in an independent Jewish kingdom under the Hasmonean dynasty in 142 BCE. In c. 83–80 BCE, Alexander Jannaeus led a Hasmonean campaign to conquer lands east of the Jordan River.

In 63 BCE the Roman general Pompey conquered Coele-Syria, including Judea, and ended Hasmonean independence. Pompey granted self-rule to roughly ten Greek cities on Coele-Syria's eastern frontier; this group, of which Hippos was one, came to be called the Decapolis and was incorporated into the Roman ''Provincia Syria''. Under Roman rule, Hippos was granted a certain degree of autonomy. The city minted its own coins, stamped with the image of a horse in honor of the city's name. Hippos was given to Herod the Great in 37 BCE and returned to the Province of Syria at his death in 4 BCE. According to Josephus, during this time Hippos, a pagan city, was the "sworn enemy" of the new Jewish city across the lake, Tiberias. Jews had resided in Tiberias when it was still known by its previous name, Rakkat. Rakkat was later given the name Tiberias some 25 years after Herod's death by his son, Herod Antipas, in honor of the Roman Emperor, Tiberius, in AD 20. Josephus reports that during the First Jewish–Roman War of AD 66–70, Hippos persecuted its Jewish population. Other Jews from Sussita participated in attacks on Magdala and elsewhere. Hippos itself fell under attack by rebels at least once. After the Romans put down the next Jewish revolt, they created the province of Palaestina in 135, of which Hippos was a part. This was the beginning of Hippos' greatest period of prosperity and growth. It was rebuilt along a grid pattern, centered around a long ''decumanus maximus'' running east–west through the city. The streets were lined with hundreds of red granite columns imported from Egypt. The great expense required to haul these columns to Palestine and up the hill is proof of the city's wealth. Other improvements included a ''Kalybe'' (a shrine to the Emperor), a theatre, an odeon, a basilica, and new city walls. The most important improvement, however, was the aqueduct, which led water into Hippos from springs in the Golan Heights, 50 km away. The water, collected in a large, vaulted cistern, allowed a large population to live in the city.

The imperial restructuring under the emperor Diocletian placed Hippos in the province of Palestina Secunda, encompassing Galilee and the Golan. When Christianity became officially tolerated in the Roman Empire, Palestine became the target of Imperial subsidies for churches and monasteries, and Christian pilgrims brought additional revenue. Industry expanded and more luxury goods became available to common people. Christianity came slowly to Hippos. There is no evidence of any Christian presence before the 4th century. A Byzantine-era pagan tomb of a man named Hermes has been found just outside the city walls, attesting to the relatively late presence of paganism here. Gradually, however, the city was Christianized, becoming the seat of a bishop by at least 359. One Bishop Peter of Hippos is listed in surviving records of church councils in 359 and 362.

The Muslim armies of the Rashidun period invaded Palestine in the 7th century, completing their conquest by 641. Hippos' new Arab rulers allowed the citizens to continue practicing Christianity, a policy then continued by the Umayyad Caliphate. According to archaeologists, the Islamic regime did not pull down the churches but Christian imagery engraved on Byzantine brass bread stamps and chancel screens was covered over with a paste of tin and lead. However, the population and economy continued to decline. The earthquake of 749 destroyed Hippos and it was abandoned permanently. 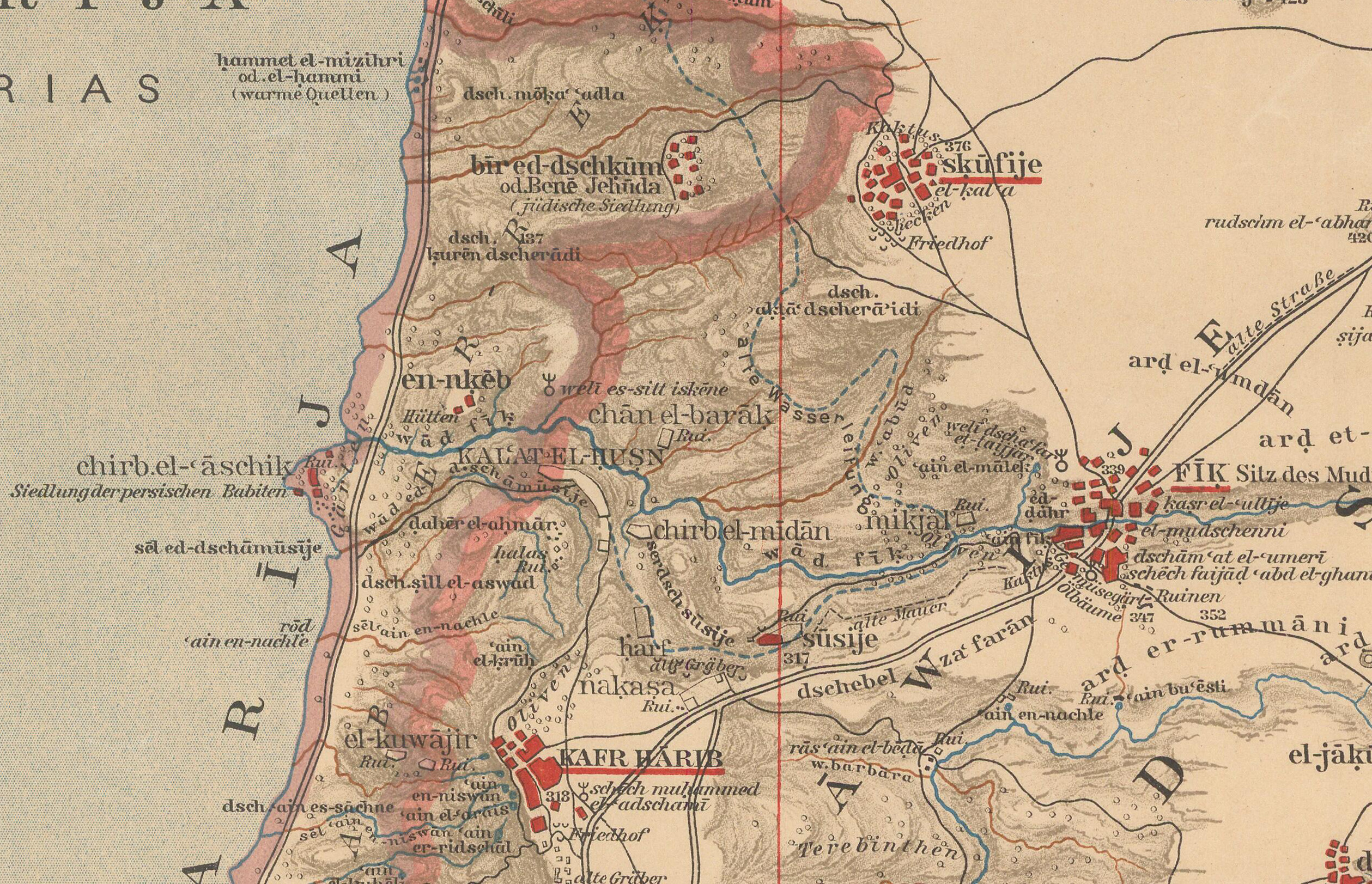 G. Schumacher visited the ruin in 1883–1885, giving a protracted account of Hippos (''Kŭlat el Husn'') in his work, ''The Jaulân'', although he had incorrectly surmised that the site may have been the ancient Gamala described by Josephus.

The first excavations were carried out by Israeli archaeologists Emmanuel Anati, Claire Epstein, Michael Avi-Yona and others from 1951 to 1955. They unearthed some domestic buildings, the main city gate at the east and a large Byzantine church that had probably been the seat of Hippos' bishop. After the excavations, the Israel Defense Forces used Mount Sussita for the same purpose as the ancient Greeks—as a fortress. It was used as a border defense against Syria until much of the Golan Heights were captured by Israel in the 1967 Six-Day War. In 1964 Mt. Sussita was declared a National Park and in 2004 the area around it, including the site itself, were declared a National Reserve. Following an archaeological survey conducted in 1999, it was decided to embark on a large-scale scientific project of excavations. The site has been excavated annually since, with the 14th season of excavations slated to take place in the summer of 2013. The research undertaken at Hippos-Sussita is an international project. The first eleven seasons (2000–2010) were an Israeli–Polish–American collaboration, co-directed by Professor Arthur Segal and Dr. Michael Eisenberg from the Zinman Institute of Archaeology, University of Haifa; Professor Jolanta Młynarczyk from the Research Centre for Mediterranean Archaeology, Polish Academy of Sciences; Dr. Mariusz Burdajewicz of the National Museum, Warsaw and Dr. Mark Schuler from Concordia University, St. Paul, Minnesota, USA. The main areas of excavation were the odeion, the basilica, the North-West Church, the North-East Church and its surrounding insulae, domestic quarters, the southern bathhouse, the defensive ditch and fortifications next to it and the necropoleis (burial grounds). As from 2012 the excavations are directed by Dr. Michael Eisenberg, focusing on the Roman basilica, the Roman-Byzantine southern bathhouse, the north-east insula, the living quarters and the Roman bastion. As from 2016 Dr. Arleta Kowalewska joined the directorship and the team focuses on the street network, saddle compound and saddle necropolis. The objective of the expedition is to uncover the entire ancient city, the street network, the main secular and religious public buildings, as well as the domestic quarters. It also hopes to survey and excavate the two necropoleis located to the south and the south-east of the city. The relationship between the city and the surrounding countryside will also be examined in future seasons, especially the area stretching between the city and the lake. Furthermore, it plans to conduct a detailed survey of the lake's shore to establish the exact location of Hippos' port. In 2015 a large bronze mask, almost without equal for its dimensions and dated between the 1st century BCE and the 2nd century CE, depicting the Greek god Pan was retrieved by archaeologists from the site.

In the New Testament, when Jesus mentions a "city set upon a hill" that "cannot be hidden" (one of the metaphors of Salt and Light in the Sermon on the Mount), he may have been referring to Hippos. In addition, a miracle of Jesus recounted in Mark 5 and Luke 8 may also be related to Hippos (). See Gergesa for a discussion of the location of this miracle. Catholic mystic Maria Valtorta in her vision-based work "Poem of the Man God" reported that Jesus Christ visited and preached in Hippos.