The House of Habsburg (; ; alternatively spelled Hapsburg in English; german: Haus Habsburg, es, Casa de Habsburgo, hu, Habsburg-család), also House of Austria (german: link=no, Haus Österreich, es, link=no, Casa de Austria), was one of the most prominent royal houses of Europe in the 2nd millennium. The house takes its name from Habsburg Castle, a fortress built in the 1020s in present-day
Switzerland ,german: Schweizer(in),french: Suisse(sse), it, svizzero/svizzera or , rm, Svizzer/Svizra , government_type = Federalism, Federal semi-direct democracy under a multi-party assembly-independent Directorial system, directorial republic , leader_t ...
by Radbot of Klettgau, who named his fortress Habsburg. His grandson Otto II was the first to take the fortress name as his own, adding "Count of Habsburg" to his title. In 1273, Count Radbot's seventh-generation descendant Rudolph of Habsburg was elected King of the Romans. Taking advantage of the extinction of the Babenbergs and of his victory over Ottokar II of Bohemia at the battle on the Marchfeld in 1278, he subsequently moved the family's power base to
Vienna en, Viennese , iso_code = AT-9 , registration_plate = Vehicle registration plates of Austria, W , postal_code_type = Postal code , postal_code = , timezone ...
, where the Habsburgs ruled until 1918. The throne of the
Holy Roman Empire The Holy Roman Empire ( la, Sacrum Imperium Romanum; german: Heiliges Römisches Reich) was a multi-ethnic complex of territories in Western Europe, Western and Central Europe that developed during the Early Middle Ages and continued until its D ...
was continuously occupied by the Habsburgs from 1440 until their extinction in the male line in 1740 and, after the death of Francis I, from 1765 until its dissolution in 1806. The house also produced kings of
Bohemia Bohemia ( ; cs, Čechy ; ; hsb, Čěska; szl, Czechy) is the westernmost and largest historical region of the Czech lands in the present-day Czech Republic. Bohemia can also refer to a wider area consisting of the historical Lands of the Bohem ...
,
Hungary Hungary ( hu, Magyarország ) is a country in Central Europe. It borders Slovakia to the north, Ukraine to the northeast, Romania to the east and southeast, Serbia to the south, Croatia and Slovenia to the southwest, and Austria to the west. ...

The origins of Habsburg Castle's name are uncertain. There is disagreement on whether the name is derived from the High German ''Habichtsburg'' (hawk castle), or from the Middle High German word ''hab/hap'' meaning ''ford'', as there is a river with a ford nearby. The first documented use of the name by the dynasty itself has been traced to the year 1108. The Habsburg name was not continuously used by the family members, since they often emphasized their more prestigious princely titles. The dynasty was thus long known as the "house of Austria". Complementarily, in some circumstances the family members were identified by their place of birth. Charles V, Holy Roman Emperor, Charles V was known in his youth after his birthplace as Charles of Ghent. When he became king of Spain he was known as Charles of Spain, and after he was elected emperor, as Charles V (in French, ''Charles Quint''). In Spain, the dynasty was known as the ''Casa de Austria'', including illegitimate sons such as John of Austria and John Joseph of Austria. The arms displayed in their simplest form were those of Austria, which the Habsburgs had made their own, at times impaled with the arms of the Duchy of Burgundy (ancient). After Maria Theresa married Duke Francis Stephen of Lorraine, the idea of "Habsburg" as associated with ancestral Austrian rulership was used to show that the old dynasty continued as did all its inherited rights. When Francis I became Emperor of Austria, he adopted the old shield of Habsburg in his personal arms, together with Austria and Lorraine. This also reinforced the "Germanness" of the (French-speaking) Austrian Emperor and his claim to rule in Germany, not least against the Prussian Kings. Some younger sons who had no prospects of the throne were given the personal title of "count of Habsburg". The surname of more recent members of the family such as Otto von Habsburg and Karl von Habsburg is taken to be "von Habsburg" or more completely "von Habsburg-Lothringen". Princes and members of the house use the tripartite arms adopted in the 18th century by Francis Stephen. 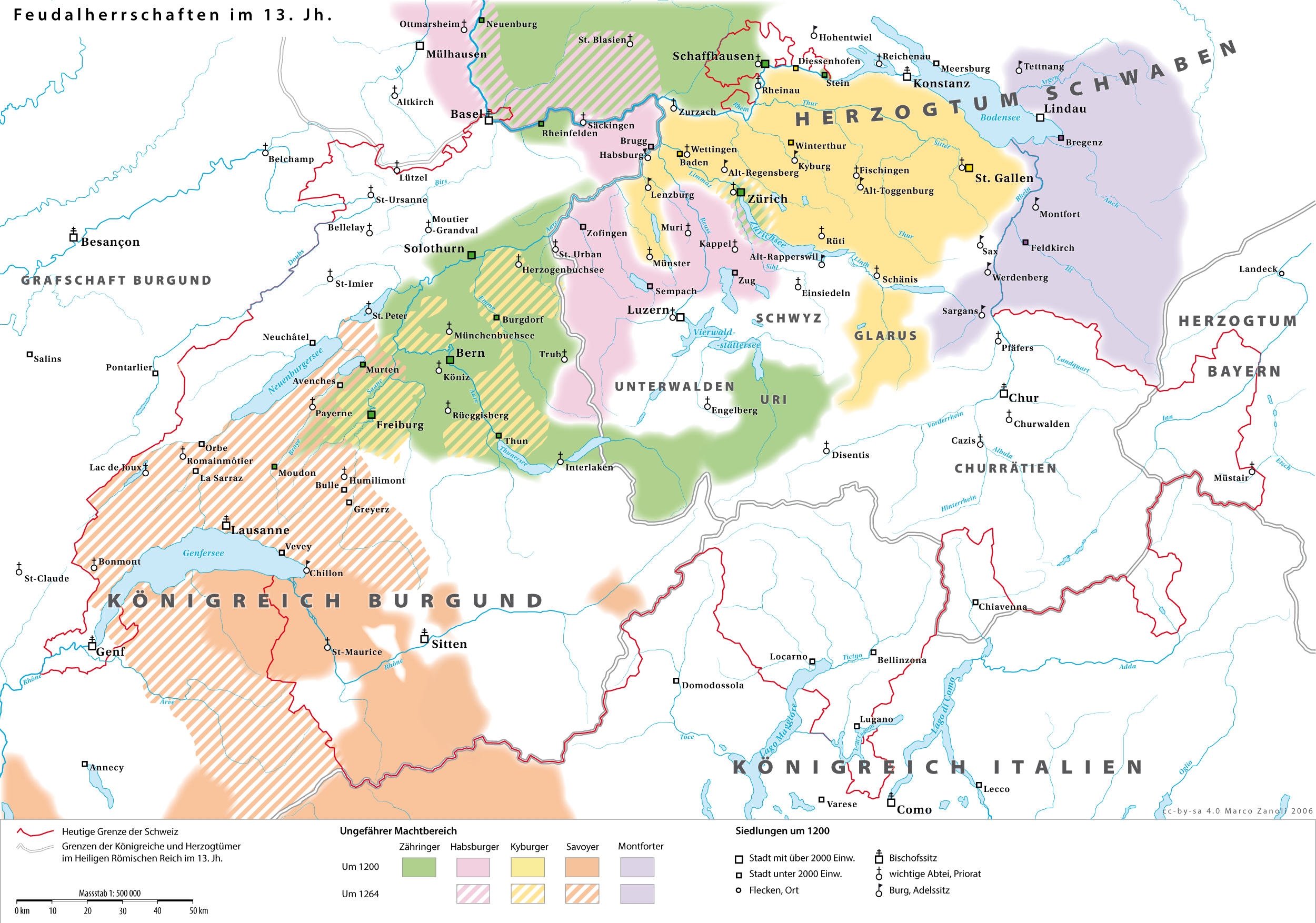 The progenitor of the House of Habsburg may have been Guntram the Rich, a count in the Breisgau who lived in the 10th century, and forthwith farther back as the medieval Adalrich, Duke of Alsace, from the Etichonids from which Habsburg derives. His grandson Radbot of Klettgau founded the Habsburg Castle. That castle was the family seat during most of the 11th, 12th and 13th centuries. The Habsburgs expanded their influence through arranged marriages and by gaining political privileges, especially countship rights in Zürichgau, Aargau and Thurgau. In the 13th century, the house aimed its marriage policy at families in Upper Alsace and Swabia. They were also able to gain high positions in the church hierarchy for their members. Territorially, they often profited from the extinction of other noble families such as the House of Kyburg.