Guadalajara (, ) is a city and municipality in Spain, located in the autonomous community of Castilla–La Mancha. It is the capital of the Province of Guadalajara. Lying on the central part of the Iberian Peninsula at roughly metres above sea level, the city straddles the Henares River. it has a population of 86,222 which makes it the region's second most populated municipality.

A Roman town called ''Arriaca'', possibly founded by a pre-Roman culture, is known to have been located in that region. There is however no archeological proof of its existence, only references in texts such as the ''Ruta Antonina'', which describe it as being in the hands of the Carpetani when encountered by the Romans. The city, as ''Caracca'', was incorporated into the Roman province of Hispania Tarraconensis. The city was on the high road from Emerita (modern Mérida) to Caesaraugusta (modern Zaragoza), 22 M. P. northeast of Complutum (modern Alcalá de Henares).

The town of Guadalajara was founded in the 8th century, in the time of the Emirate of Córdoba. It was officially known as Madinat-al-Faray in the 9th and 10th centuries. The town was later known as Wādī l-Ḥiŷāra ( ar|وادي الحجارة), possibly meaning "Valley of Stones" (as in river gravel); in theory it may be a literal translation of the Iberian name ''Arriaca''. It has also been also proposed that ''Ḥajāra'' should not be understood as ''stones/gravel'', but in the sense of "castles" or "fortified rocks". Part of the of Al-Andalus, the city and its wider district was controlled by the Masmuda berber clan of the Banū Sālim who governed on behalf of the Umayyad rulers of Córdoba. During the Muslim period an ''Alcázar'' (fortress) was built by the mid-9th century, as well as the Bridge over the Henares (its construction has been tentatively dated by the late 10th century or early 11th century). City walls protecting the city were also built then. 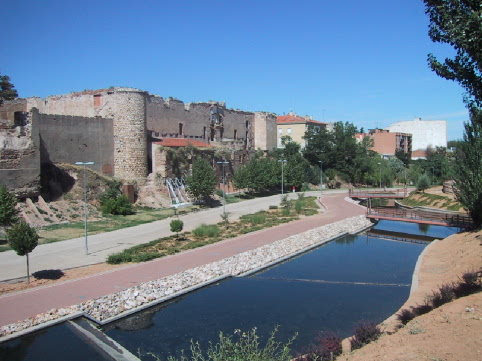 Guadalajara was part of the territory annexed by Alfonso VI of León-Castile in the 1085 conquest of the Taifa of Toledo, with the city of Guadalajara surrendering and offering no resistance. Tradition claims however that a contingent led by Álvar Fáñez de Minaya (one of the lieutenants of El Cid) seized the city on 24 June, at night. The area was repopulated with people from the North (Castilians from the mountains and Merindades, Basques and Navarreses mainly). Alfonso VII granted Guadalajara its first ''fuero'' on 3 May 1133. This charter progressively incorporated several amendments. The second ''fuero'', probably conceived during the reign of Alfonso VIII, was anyway confirmed by Ferdinand III on 26 May 1219 and 13 April 1251. During the reign of Alfonso X of Castile, the protection of the king allowed the city to develop its economy by protecting merchants and allowing markets.

Traditionally a ' town, with a vote in the Cortes of Castile, the town became under the influence of the powerful Mendoza family until well entered the Early Modern period. Despite the former meddling that underpinned the political control of the city, Guadalajara was not enshrined as formal seigneurial jurisdiction of the Mendozas in a legal sense. The family included Íñigo López de Mendoza, also known as Marqués de Santillana (1398–1458), and Pedro González de Mendoza (1428–1495), Great Cardinal of Spain and adviser of the Catholic Monarchs. The Mendoza family held the title of Dukes and Duchesses of El Infantado from 1475. On 25 March 1460, Henry IV granted Guadalajara the status of 'City'. In this period, the Mendoza Family ordered the building of El Palacio del Infantado as their main residence. It was completed in the early 1480s and it is considered by many the oldest surviving building built in a pure Renaissance style outside Italy. In the early 16th century, the city was one of the main focal points of the ''iluminismo'' (or ''alumbrados'') in the Kingdom of Toledo, linked to heterodox religious figures such as and . In the context of the Revolt of the Comuneros across the Crown of Castile, the ''comunero'' rebels in Guadalajara, as early as 5 June 1520, asked the Duke of the Infantado, Diego Hurtado de Mendoza, to join the anti-imperial revolt. The demonstrators lit the houses of the ''procurators'' who went to the Cortes of La Coruña to vote in favour of the taxes and obligations levied by Emperor Charles V. The Duke of Infantado played a cautious waiting game to see which side would win, finally choosing to endorse the Emperor in 1521. He ordered the beheading of the local leaders of the insurgency and the deportation of his own son and successor Íñigo López de Mendoza, who had leaned towards the ''comunero'' cause. By the late 16th century, in 1591, the city had a population of 6,754.

During the War of the Spanish Succession, Guadalajara was sacked. Ravaged by the ''Austracist'' army, a largely ruined Guadalajara hit then its lowest demographic point, with only 2,200 inhabitants. Philip V ordered the establishment of the Real Fábrica de Paños (Royal Factory of Clothes), which was opened in the city in 1719 in the Palacio del Marqués de Montesclaros.

The 19th century started with two major setbacks: the damages caused by the Peninsular War (1808–1814) and the closing of the Real Fábrica de Paños in 1822. In 1808, Guadalajara was taken by the French Army led by General Hugo and the city was destroyed. In 1840 Guadalajara was established as the capital of the province with the same name by the Plan de Burgos. The Academy of Military Engineers was brought to the city. The development during the second half of the 19th century till the first quarter of the 20th century was slow and centered on the developing of the administration without any special interest in industrial development. On 21 July 1936, following the general coup d'état of 18 July that sparked the Spanish Civil War (1936–1939), the conspiring officers in the city (joined by the forces of public order and some civilians, amounting to an overall force of roughly 800) raised in arms, seizing control of the city. The next day, the Republican Government in Madrid sent Ildefonso Puigdendolas to quell the rebellion and secure the city. The rebels were pushed in retreat to the ''Cuartel de Aerostación'', where they surrendered. The militias executed roughly one hundred of them. The city was the target of several aerial bombing attacks by the Francoist faction throughout the conflict; the most known one, in December 1936, affected the Palacio del Infantado. 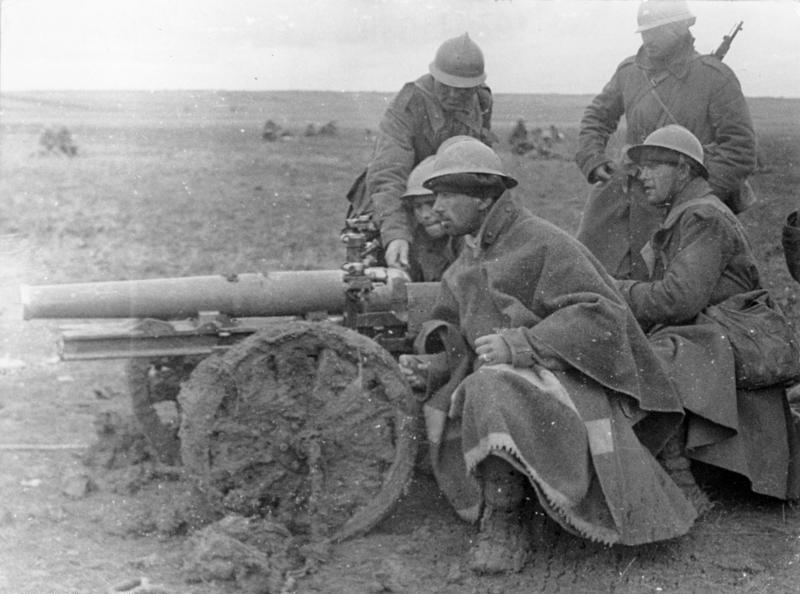 On 8 March 1937, the four divisions of the Italian Corpo Truppe Volontarie (CTV), attacked Republican positions outside Guadalajara as a supporting diversionary attack supporting the Nationalist Jarama Offensive launched at the beginning of February. After four days of slow, cautious advance during rainy weather, the tanks started attacking down substantial hard paved roads and outran their air and anti-aircraft artillery support. Shortly thereafter, Republican aviation assets airborne in newly cleared skies found the tanks and infantry in a traffic jam on the main road heading into Guadalajara. The Republican aircraft proceeded to attack and destroy all the vehicles in the mechanized spearhead. The CTV was thrown back with casualties in the thousands. Ernest Hemingway and other war correspondents labeled the attack, "Italian débâcle at Guadalajara." Republican forces enjoyed an increase in recruitment as a result of the victory. This defeat at Guadalajara had two long-standing effects. First, the Italian Army of the Mussolini dictatorship acquired a reputation for incompetence that never left it before the armistice of 1943. Second, some observing nations adopted an armored doctrine that ruled out tanks operating as an independent force, but emphasized tying them tightly to large infantry formations. The Civil War and the heavy fighting around the city caused significant damage. After two decades of slow rebuilding, Guadalajara was included in 1959 in the development plans addressing the congestion of Madrid's industrial estates (''El Plan de Descongestión Industrial de Madrid en Castilla-La Mancha''). These plans attempted to move industrial and accompanying residential growth to the periphery, resulting in increased industry presence in Guadalajara. Since then, Guadalajara has been one of the cities in Spain with greatest relative growth. Nowadays, Guadalajara is involved in urban development plans that are quickly increasing the population of the city. New districts like Aguas Vivas (Live Waters) have been inaugurated. Ciudad Valdeluz was planned to increase the number of inhabitants of Guadalajara by 30,000, creating a new city around the AVE Station (Spanish High-Speed Trains). The company investing in the construction of Ciudad Valdeluz went bankrupt. Fewer than 500 inhabitants decided to occupy their flats and the remaining infrastructure is slow degrading. The AVE trains are used by only 60 passengers a day. The town-plannings have dramatically increased the cost of the new houses, and it has become one of the cheapest provinces in Spain for house-buying to be the 3rd province in Spain with the most expensive square meter.

Guadalajara is located the central part of the Iberian Peninsula, in the southern half of the Inner Plateau. Chosen as settlement on the basis of defensive purposes, the historic urban core of the city lies on a small elevation near the left-bank of the Henares River, also enclosed to the East and West by two small ditches corresponding to two watercourses, and San Antonio, respectively, forming a narrow and easily defendable space upon their confluence with the Henares.

Guadalajara enjoys a Mediterranean climate (Köppen climate classification: ''Csa'') with continental influences for being well inland at 700 meters above sea level. Summers are hot with relatively cool nights, while winters are cool with cold nights. The lowest temperature ever recorded in Guadalajara is on 12 January 2009. The highest temperature ever recorded is on 10 August 2012.

Guadalajara is a municipality, the basic level of local division in Spain. The Ayuntamiento is the body charged with the municipal government and administration. The Plenary of the ''ayuntamiento'' is formed by 25 elected municipal councillors, who in turn invest the mayor. The last municipal election took place on 26 May 2019. Since June 2019, the current mayor is Alberto Rojo Blas (Spanish Socialist Workers' Party).

;City proper The bridge across the Henares river is Arab but built on Roman foundations. It has several historic buildings such as the Palacio del Infantado, as well as many churches, such as the church of San Ginés. Although Guadalajara is the biggest city in its diocese, the cathedral is located in the nearby town of Sigüenza. However, in Guadalajara, there is a "co-cathedral", the church of Saint Mary, in Mudejar style. Very close to this church, is placed the chapel known as "Capilla de Luis de Lucena", which has several fresco paintings on its walls and ceiling. The Church of los Remedios was declared ''Bien de Interés Cultural'' in 1924, and currently serves as the auditorium of the University of Alcalá. The Church of la Piedad was declared ''Bien de Interés Cultural'' in 1931. Before the Civil War, Guadalajara was also known to be among the cities with most number of antique azulejos in the Iberian Peninsula housed in their buildings, since the city housed the largest collection of azulejos from Talavera de la Reina pottery; now almost all of those azulejos are lost. ;''Pedanías''

The small villages (''pedanías'') of Iriépal, Taracena, Usanos, and Valdenoches that belong to the municipality feature few monumental landmarks other than their humble rural churches. Thus, in Iriépal there is the Concepción church, constructed in the 16th century, which is known for its Mudéjar tower. In Taracena there is the 17th century Church of the Immaculate, in a very simple Renaissance style. In Usanos, there is the 13th-century Romanesque church of the Assumption, considerably remodeled in later periods and which features a crenelated tower. Other types of monuments that are also noteworthy are the Iriépal laundry, work of 1910 in historicist style with funding from the Jose Santa María de Hita Foundation, and Iriépal (1858) and Valdenoches (1656) funds. Throughout all the villages there are examples of Castilian mansions, quite modest compared to those in the cities. Of note also is Villaflores, a farming village built in 1887, designed by Ricardo Velázquez Bosco and commissioned to Maria Diega Desmaissières.