Gretchen Esther Whitmer (born August 23, 1971) is an American lawyer and politician serving as the 49th governor of Michigan since 2019. A member of the Democratic Party, she served in the Michigan House of Representatives from 2001 to 2006 and in the Michigan Senate from 2006 to 2015. Whitmer was born and raised in Michigan. She is a graduate of Forest Hills Central High School near Grand Rapids, Michigan State University, and the Michigan State University College of Law. She ran unsuccessfully for the state house in the 1990s before being elected in 2000. In 2006, she became a state senator, a position she kept until term limits forced her to step down in 2015. She was the Senate's first female Democratic leader from 2011 to 2015. In 2013, Whitmer gained national attention for a floor speech during a debate on abortion in which she shared her experience of being sexually assaulted. For six months in 2016, she was the county prosecutor for Ingham County. Whitmer was elected governor in the 2018 gubernatorial election, defeating Republican Attorney General Bill Schuette. As governor, Whitmer has focused on healthcare and infrastructure. In February 2020, she was selected to give the Democratic response to President Donald Trump's 2020 State of the Union Address. On October 8, 2020, the Federal Bureau of Investigation thwarted a militia group's kidnapping plot against her. Since January 2021, Whitmer has served as one of the vice chairs of the Democratic National Committee.

Gretchen Whitmer was born on August 23, 1971, in Lansing, Michigan, the eldest of three children of Sharon H. "Sherry" Reisig and Richard Whitmer, both attorneys. Her father was head of the state department of commerce under Governor William Milliken and was the president and CEO of Blue Cross Blue Shield of Michigan between 1988 and 2006. Whitmer's mother worked as an assistant attorney general under Michigan Attorney General Frank Kelley. Her parents divorced when she was ten years old; she and her siblings moved with their mother to Grand Rapids. Her father traveled from his home in Detroit to visit the family at least once a week. After graduation from Forest Hills Central High School, just outside Grand Rapids, Whitmer earned a BA degree in communications from Michigan State University in 1993 and a Juris Doctor from Detroit College of Law at Michigan State University in 1998.

Whitmer originally ran for the Michigan House of Representatives in the 1990s but was unsuccessful. In 2000, she tried again and was elected to represent the 23rd legislative district. She was reelected in 2002 and 2004.

In March 2006, Whitmer won a special election to the Michigan State Senate, replacing Virg Bernero, who had been elected mayor of Lansing in November 2005. She was elected to a full term in November, and reelected in 2010. In 2011, Whitmer's Democratic colleagues unanimously chose her to be the Senate Democratic Leader, making her the first woman to lead a party caucus in the Senate. Due to term limits, Whitmer was unable to run for reelection in 2014 and left office in 2015. In 2013, she received national recognition when she discussed her experience of being sexually assaulted. She told the story during a debate about abortion rights, particularly for victims of rape, arguing victims should be allowed to terminate pregnancies that result from rape.

On May 11, 2016, it was announced that the judges of Michigan's 30th Judicial Circuit Court had unanimously selected Whitmer to serve the remaining six months of outgoing Ingham County Prosecutor Stuart Dunnings III's term after he was arrested on March 14, 2016, and charged with 11 counts of involvement with a prostitute and four counts of willful neglect of duty. In a letter dated March 29, 2016, Dunnings announced he would resign effective July 2. On June 21, 2016, Whitmer was administered the oath of office as prosecutor by Ingham County Circuit Court Chief Judge Janelle Lawless. She said her top priorities during her six months of service would be to determine if any other officials in the prosecutor's office knew about Dunnings's alleged crimes and to change how the office handled domestic violence and sexual assault cases. On July 22, 2016, Whitmer issued an 11-page report on whether Dunnings's alleged criminal activity had affected cases handled by the office. The report concluded that employees "were never asked to compromise a case or look the other way" and that she had "full confidence that any problem that had existed in this office left with Mr. Dunnings." Whitmer's term expired on December 31, 2016.

On January 3, 2017, Whitmer announced she would run in the 2018 Michigan gubernatorial race. On August 7, 2018, Whitmer became the Democratic nominee for governor of Michigan. She won all 83 counties in the state in the Democratic primary. In July 2018, Republican officials accused Whitmer of supporting the movement to abolish ICE, a claim Whitmer disputed. She said that if elected she would focus on improving Michigan's "fundamentals", such as schools, roads, and water systems. Whitmer's main opponent was Republican Bill Schuette, the term-limited attorney general of Michigan. The two candidates met for a debate on October 12, 2018, in Grand Rapids at WOOD-TV. A second debate was held at WDIV studios in Detroit on October 24. Whitmer defeated Schuette in the November 6 election by nearly a 10-point margin.

Whitmer describes herself as a progressive Democrat who can work with state legislators from different political perspectives. As both a gubernatorial candidate and as governor, one of Whitmer's key pledges was to "fix the damn roads", a reference to Michigan's struggling infrastructure. Her initial post-election plan to fund road repairs with a 45-cent-per-gallon gas tax increase was, however, deeply unpopular, with one poll finding it opposed by 75% of Michigan voters, including majorities of both Democrats and independents. Democratic legislators in Michigan's Republican-controlled legislature largely declined to support the plan, which would have nearly tripled Michigan's gas tax and potentially made it the highest in the nation. 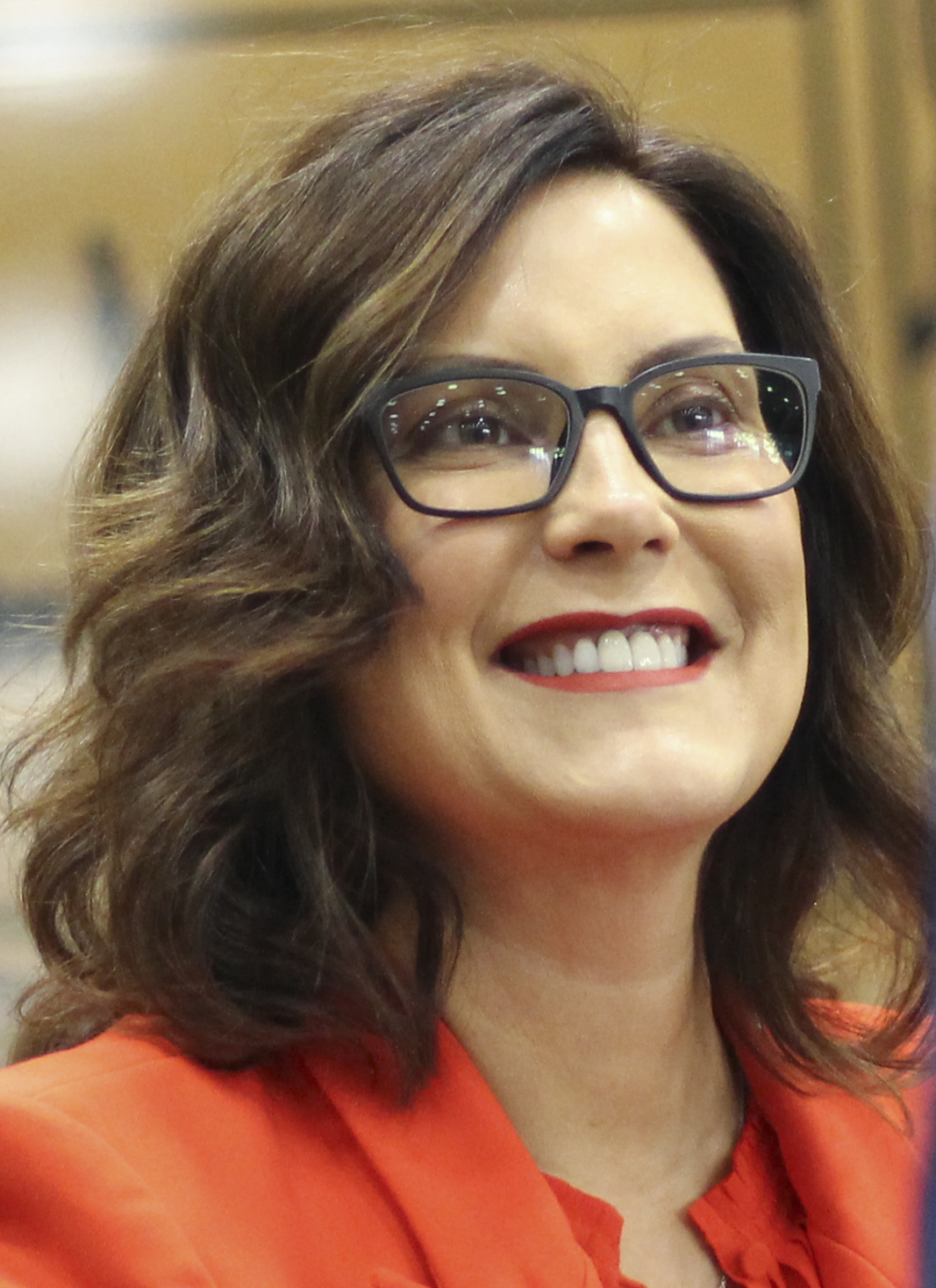 Whitmer's first budget earmarked several billions of dollars for investment in infrastructure. In 2019, she struggled with the Republican-controlled legislature to pass a budget and made several concessions. The gubernatorial election and national conversation during Whitmer's time in office focused largely on healthcare. During the election, she was the only Democratic candidate not to support a single-payer healthcare system. As governor, she has focused on women's healthcare and Medicaid expansion. In May 2020, the Edenville Dam gave way after awaiting an overdue report on its safety standards. Whitmer directed the EGLE to form an investigation that "state Republicans, flooding victim advocates and dam safety experts" criticized, concerned that the state's environmental agency would essentially be investigating itself. Guidelines from the Association of State Dam Safety Officials advocate independent investigators. An inquiry launched by the U.S. House of Representatives later gave the EGLE and FERC a two-week deadline for answers.

Whitmer issued a stay-at-home order in response to the COVID-19 pandemic in March 2020. This order was met with broad public approval; a March poll found that 69% of Michigan residents supported Whitmer's actions, including 61% of self-identified Republicans. After Whitmer extended the order and tightened restrictions in April, an eight-hour protest against the restrictions organized by the Michigan Conservative Coalition and co-hosted by the Michigan Freedom Fund attracted between 3,000 and 4,000 protesters to the Michigan State Capitol. ''New York Times'' columnist Charlie Warzel described the demonstration as "twisted, paranoid and racialized", pushed by conspiracy theorists such as Alex Jones. Jeanine Pirro of Fox News praised the protesters, saying, "God bless them, it’s going to happen all over the country". At the time of the protest, more than 1,900 people in Michigan had died after contracting the virus.