On July 1, 1899, “The Puerto Rico Regiment of Infantry, United States Army” was created. On July 1, 1901, Lieutenant Colonel James Anderson Buchanan took command of the regiment. He was later promoted to colonel on July 21, 1902, and to brigadier general in 1905. Buchanan served in Puerto Rico from 1898 to 1903 and Fort Buchanan was named after him.

The Puerto Rico Regiment was officially designated as the 65th Infantry Regiment in 1920, after defending the Canal Zone during World War I. A tract of 300 acres approximately six miles on the south shore of San Juan Bay was acquired to provide the regiment with a training area. The site was established in 1923 as Camp Buchanan. It served as a target range and maneuver area for the U.S. Army and National Guard troops from 1923 to 1939. The 1st Battalion 51st Coast Artillery Regiment was also assigned to Camp Buchanan in 1939. 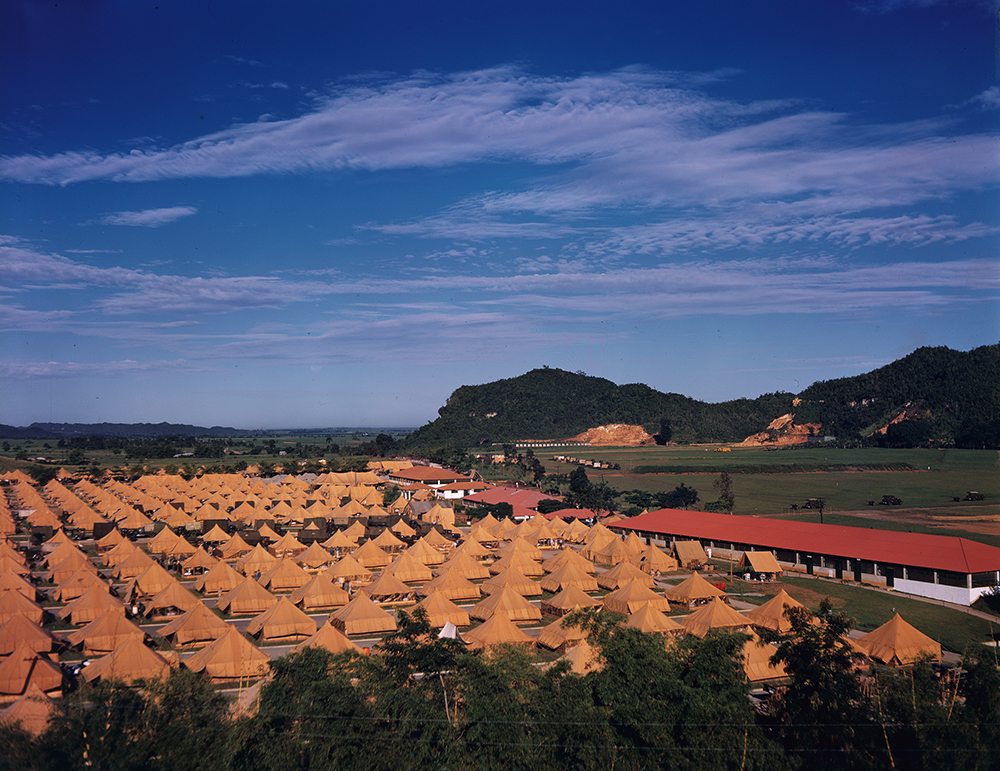 In May 1940 the location was renamed Fort Buchanan. It was eventually expanded to 4,500 acres. During World War II, Fort Buchanan housed a depot supplying the Army Antilles Department. It also processed local troops through its replacement center. The industrial complex included pier facilities, ammunition storage areas and an extensive railroad network connecting the military installation to the Port of San Juan at San Juan Bay. Puerto Rican soldiers being deployed during World War II and the Korean War were transported from the train station to the Army terminal at the Port of San Juan. At the time, Fort Buchanan served as a citizens training camp and soldier processing station. After World War II the post was gradually reduced to its current size of 746 acres. Fort Buchanan remained a command depot with post facilities, a personnel center, and a special training center until closure as an Army post in 1966. On December 31, 1966, with the deactivation of the Antilles Command, Fort Buchanan passed to the control of the United States Navy. On December 7, 1971, the Third U.S. Army resumed control of Fort Buchanan, and in 1973 the post came under direct control of the United States Army Forces Command (FORSCOM). Following the Department of Defense Unified Command Plan, Fort Buchanan came under control of United States Southern Command (SOUTHCOM). From 1999 to 2003 it was occupied by United States Army South (USARSO). In 2002 Fort Buchanan became part of the Southeast Regional Office of the Installation Management Agency (IMA), and in 2003 it became an IMA Reserve installation. In 2006 it became a garrison under United States Army Installation Management Command, Southeast Region (IMCOM-SE). On October 1, 2008 the Commanding General of the 81st Regional Readiness Command became Fort Buchanan's Senior Mission Commander under the United States Army Reserve Command (USARC). Based on the December 2008 Unified Command Plan, Fort Buchanan currently falls under the United States Northern Command (USNORTHCOM) area of operations, under the direct control of the Installation Management Command, Atlantic Region (IMCOM-Atlantic). On October 23, 2009, an explosion at the nearby Caribbean Petroleum Corporation two people suffered minor injuries at Fort Buchanan, and four other people sought help for respiratory problems. The explosion caused minor damages in some facilities of the military installation. In 2017 after the wake of Hurricane Maria, Fort Buchanan served as a command center during the recovery efforts. Military active duty, reserve and National Guard units from the continental United States were mobilized from Fort Buchanan all over the island for the emergency. Thousands of these service members were awarded the Humanitarian Service Medal for their disaster relief efforts. The United States Army Corps of Engineers also managed operations from Fort Buchanan.