East Anglia is a geographical area in the East of England. The area included has varied but the legally defined NUTS 2 statistical unit comprises the counties of Norfolk, Suffolk and Cambridgeshire, including the City of Peterborough unitary authority area. The name derives from the Anglo-Saxon kingdom of the East Angles, a tribe whose name originated in Anglia, in what is now northern Germany.

Definitions of what constitutes East Anglia vary. The Anglo-Saxon Kingdom of East Anglia, established in the 6th century, originally consisted of the modern counties of Norfolk and Suffolk and expanded west into at least part of Cambridgeshire. The modern NUTS 2 statistical unit of East Anglia comprises Norfolk, Suffolk and Cambridgeshire (including the City of Peterborough unitary authority). Those three counties have formed the Roman Catholic Diocese of East Anglia since 1976, and were the subject of a possible government devolution package in 2016. Essex has sometimes been included in definitions of East Anglia, including by the London Society of East Anglians. However, the Kingdom of Essex to the south, was a separate element of the Heptarchy of Anglo-Saxon England and did not identify as Angles but Saxons. The county of Essex by itself forms a NUTS 2 statistical unit in the East of England region. 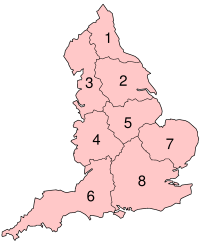 Other definitions of the area have been used or proposed over the years. For example, the Redcliffe-Maud Report in 1969, which followed the Royal Commission on the Reform of Local Government, recommended the creation of eight provinces in England. The proposed East Anglia province would have included northern Essex, southern Lincolnshire and a small part of Northamptonshire as well as Cambridgeshire, Norfolk and Suffolk.

The kingdom of East Anglia initially consisted of Norfolk and Suffolk, but the Isle of Ely also became part of it upon the marriage of East Anglian princess Etheldreda. It was formed around 520 by merging the North and South Folk, Angles who had settled in the former lands of the Iceni during the previous century, and it was one of the Anglo-Saxon heptarchy kingdoms as defined in the 12th century writings of Henry of Huntingdon. East Anglia has been cited by a number of scholars as being a region where settlement of continental Germanic speakers was particularly early and dense, possibly following a depopulation in the fourth century. A 2016 study found that modern East Anglians share a strong genetic affinity with Anglo-Saxon era skeletons, but differ substantially from Iron Age and Roman era ones, which are more similar to the Welsh. This was taken to support a major influence of the Anglo-Saxon migrations on the genetic makeup of East Anglia. East Anglia was the most powerful of the Anglo-Saxon kingdoms of England for a brief period following a victory over the rival kingdom of Northumbria around 616, and its King Rædwald was Bretwalda (overlord of the Anglo-Saxons kingdoms). However, this did not last; the Mercians defeated it twice over the next 40 years, and East Anglia continued to weaken in relation to the other kingdoms. Offa of Mercia finally had king Æthelberht killed in 794 and took control of the kingdom himself. Independence was temporarily restored by rebellion in 825, but the Danes killed King Edmund on 20 November 869 and captured the kingdom. Edward the Elder incorporated East Anglia into the Kingdom of England, and it later became an earldom. Parts of East Anglia remained marshland until the 17th century drainage of the Fens, despite some earlier engineering work during the Roman Occupation. The alluvial land was converted into wide swaths of productive arable land by a series of systematic drainage projects, mainly using drains and river diversions along the lines of Dutch practice. In the 1630s, thousands of Puritan families from East Anglia emigrated to New England in America, taking much East Anglian culture with them that can still be traced today. East Anglia based much of its earnings on wool, textiles, and arable farming and was a rich area of England until the Industrial Revolution caused a manufacturing and development shift to the Midlands and the North. During the Second World War, the Royal Air Force and the United States Army Air Force constructed many airbases in East Anglia for the heavy bomber fleets of the Combined Bomber Offensive against Nazi-occupied Europe. East Anglia was ideally suited to airfield construction, as it includes large areas of open, level terrain and is close to mainland Europe. Many of the airfields can still be seen today, particularly from aerial photographs, and a few remain in use, the most prominent being Norwich International Airport. Pillboxes were erected in 1940 to help defend the nation against invasion, and they can also be found throughout the area at strategic points.

East Anglia is bordered to the north and east by the North Sea, to the south by the estuary of the River Thames and shares an undefined land border to the west with the rest of England. Much of northern East Anglia is flat, low-lying and marshy (such as the Fens of Cambridgeshire and Norfolk), although the extensive drainage projects of the past centuries actually make this one of the driest areas in the UK. Inland much of the rest of Suffolk and Norfolk is gently undulating, with glacial moraine ridges providing some areas of steeper areas relief. The supposed flatness of the Norfolk landscape is noted in literature, such as Noël Coward's ''Private Lives'' – "Very flat, Norfolk". On the north-west corner East Anglia is bordered by a bay known as The Wash, where owing to deposits of sediment and land reclamation, the coastline has altered markedly within historical times; several towns once on the coast of the Wash (notably King's Lynn) are now some distance inland. Conversely, over to the east on the coast exposed to the North Sea the coastline is subject to rapid erosion and has shifted inland significantly since historic times. Major rivers include Suffolk's Stour, running through country beloved of the painter John Constable, and the River Nene. The River Cam is a tributary of the Great Ouse and gives its name to Cambridge, whilst Norwich sits on the River Yare and River Wensum. The River Orwell flows through Ipswich and has its mouth, along with the Stour at Felixstowe. The Norfolk and Suffolk Broads form a network of waterways between Norwich and the coast and are popular for recreational boating. The Ouse flows into the Wash at King's Lynn. Major urban areas in East Anglia include the cities of Norwich, Cambridge and Peterborough, and the town of Ipswich. Smaller towns and cities include Bury St Edmunds, Ely, Lowestoft, Great Yarmouth and King's Lynn. Much of the area is still rural in nature with many villages surrounded by a mixture of breckland, fens, broads and agricultural land.

The climate of East Anglia is generally dry and mild. Temperatures range from an average of 1–10 °C in the winter to 12–22 °C in the summer, although it is not uncommon for daily temperatures to fall and rise significantly outside these averages. Although water plays a significant role in the Fenland and Broadland landscapes, the area is among the driest in the United Kingdom and during the summer months, tinder-dry conditions are frequently experienced, occasionally resulting in field and heath fires. Many areas receive less than 700mm of rainfall a year and this is fairly evenly distributed throughout the year. Sunshine totals tend to be higher towards the coastal areas.

Transport in East Anglia consists of an extensive road and rail network. Main A roads, such as the A12 and A47 link the area to the rest of the UK, and the A14 links the Midlands to the Port of Felixstowe. This is the busiest container port in the UK, dealing with over 40% of UK container traffic and is a major gateway port into the country. There is very little motorway within East Anglia. Rail links include the Great Eastern Main Line from Norwich to London Liverpool Street and the West Anglia Main Line connecting Cambridge to London. Sections of the East Coast Main Line run through the area and Peterborough is an important interchange on this line. The area is linked to the Midlands and north-west England by rail and has a number of local rail services, such as the Bittern Line from Norwich to Sheringham. East Anglia is ideal for cycling and National Cycle Route 1 passes through it. Cambridge has the largest proportion of its residents in the UK cycling to work with 25% commuting by bicycle. The city is also home to the Cambridgeshire guided busway, which at 13.3 miles (21.4 km) was the longest stretch of guided bus-way in the world when it opened in 2011. The only major commercial airport is Norwich Airport, although London Stansted Airport, the fourth busiest passenger airport in the UK, lies just south of Cambridge in north-west Essex.

Great Yarmouth and Lowestoft Enterprise Zone, an enterprise zone initiated by New Anglia Local Enterprise Partnership, was announced in 2011 and launched in April 2012. It includes six sites with a total area of , which have attracted a number of energy-related businesses.