Digital Equipment Corporation (DEC ), using the trademark Digital, was a major American company in the computer industry from the 1960s to the 1990s. The company was co-founded by Ken Olsen and Harlan Anderson in 1957. Olsen was president until forced to resign in 1992, after the company had gone into precipitous decline. Although the company produced many different product lines over their history, they are best known for their work in the minicomputer market starting in the mid-1960s. The company produced a series of machines known as the PDP line, with the PDP-8 and PDP-11 being among the most successful minis of all time. Their success was only surpassed by another DEC product, the late-1970s VAX "supermini" systems that were designed to replace the PDP-11. Although a number of competitors had successfully competed with Digital through the 1970s, the VAX cemented the company's place as a leading vendor in the computer space. As microcomputers improved in the late 1980s, especially with the introduction of RISC-based workstation machines, the performance niche of the minicomputer was rapidly eroded. By the early 1990s, the company was in turmoil as their mini sales collapsed and their attempts to address this by entering the high-end market with machines like the VAX 9000 were market failures. After several attempts to enter the workstation and file server market, the DEC Alpha product line began to make successful inroads in the mid-1990s, but was too late to save the company. DEC was acquired in June 1998 by Compaq in what was at that time the largest merger in the history of the computer industry. During the purchase, some parts of DEC were sold to other companies; the compiler business and the Hudson, Massachusetts facility, were sold to Intel. At the time, Compaq was focused on the enterprise market and had recently purchased several other large vendors. DEC was a major player overseas where Compaq had less presence. However, Compaq had little idea what to do with its acquisitions, and soon found itself in financial difficulty of its own. The company subsequently merged with Hewlett-Packard (HP) in May 2002. , decades-old hardware (including PDP-11, VAX, and AlphaServer) is being emulated to allow legacy software to run on modern hardware; funding for this is planned to last at least until 2030.

From 1957 until 1992, DEC's headquarters were located in a former wool mill in Maynard, Massachusetts. The headquarter buildings were vacated in 1993, renamed Clock Tower Place, and subsequently redeveloped as Mill & Main Place, a 1.1 million square foot facility for offices and light industry. Initially focusing on the small end of the computer market allowed DEC to grow without its potential competitors making serious efforts to compete with them. Their PDP series of machines became popular in the 1960s, especially the PDP-8, widely considered to be the first successful minicomputer. Looking to simplify and update their line, DEC replaced most of their smaller machines with the PDP-11 in 1970, the year they became the third largest computer manufacturer after IBM and the UNIVAC Division of Sperry Rand. The rising corporation eventually sold over 600,000 PDP-11s. Originally designed as a follow-on to the PDP-11, DEC's VAX-11 series was the first widely used 32-bit minicomputer, sometimes referred to as "superminis". These systems were able to compete in many roles with larger mainframe computers, such as the IBM System/370. The VAX was a best-seller, with over 400,000 sold, and its sales through the 1980s propelled DEC to become the second largest computer company in the industry. At its peak, it was the second largest employer in Massachusetts, after the state government. The rapid rise of the business microcomputer in the late 1980s, and especially the introduction of powerful 32-bit systems in the 1990s, quickly eroded the value of DEC's systems. DEC's last major attempt to find a space in the rapidly changing market was the DEC Alpha 64-bit RISC instruction set architecture. DEC initially started work on Alpha as a way to re-implement their VAX series, but also employed it in a range of high-performance workstations. Although the Alpha processor family met both of these goals, and, for most of its lifetime, was the fastest processor family on the market, extremely high asking prices were outsold by lower priced workstation chips from Intel and IBM/Motorola. DEC was acquired in June 1998 by Compaq, in what was at that time the largest merger in the history of the computer industry. At the time, Compaq was focused on the enterprise market and had recently purchased several other large vendors. DEC was a major player overseas where Compaq had less presence. However, Compaq had little idea what to do with its acquisitions, and soon found itself in financial difficulty of its own. The company subsequently merged with Hewlett-Packard (HP) in May 2002. 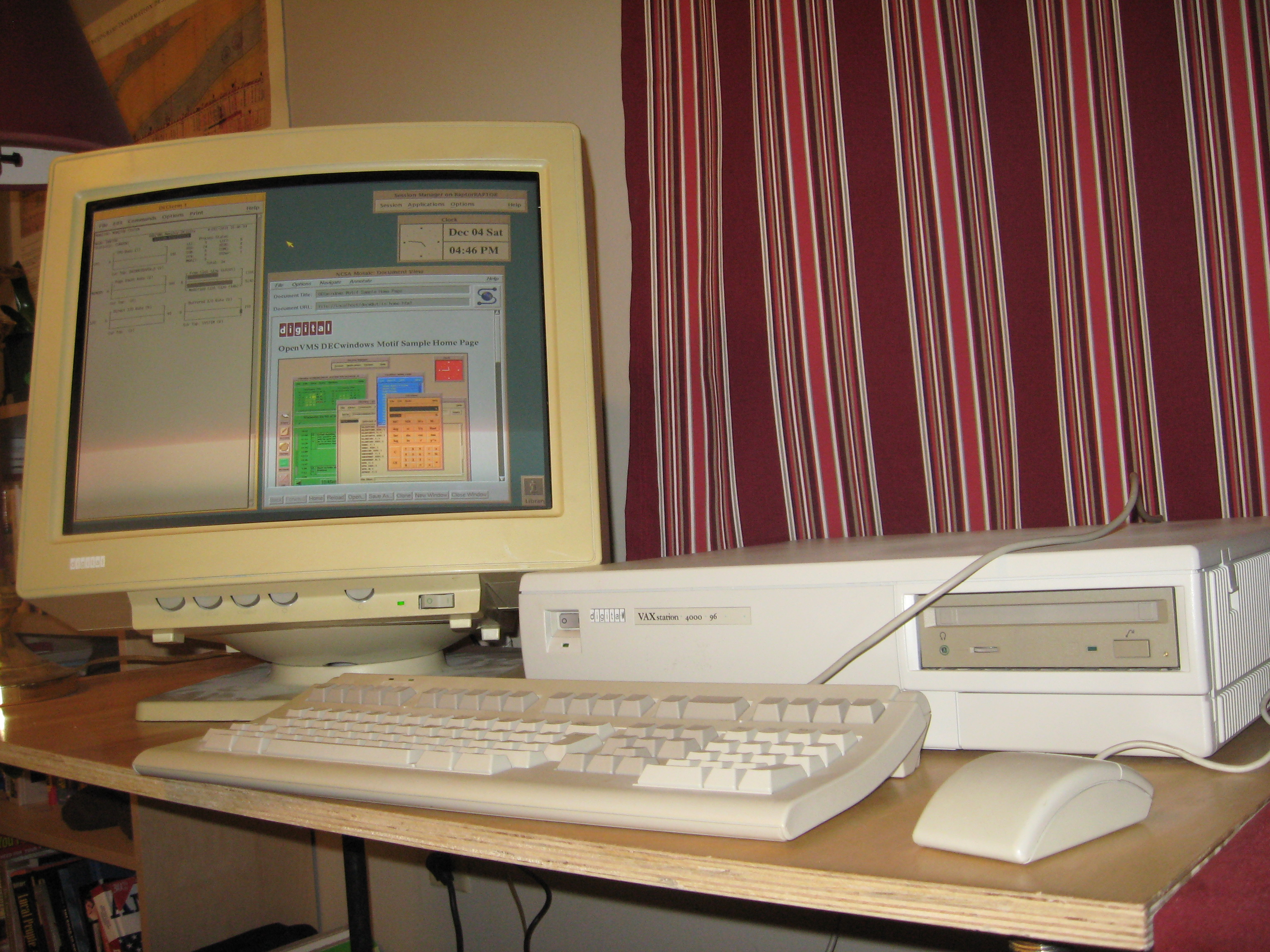 DEC supported the ANSI standards, especially the ASCII character set, which survives in Unicode and the ISO 8859 character set family. DEC's own Multinational Character Set also had a large influence on ISO 8859-1 (Latin-1) and, by extension, Unicode.

* The first versions of the C language and the Unix operating system ran on DEC's PDP series of computers (first on a PDP-7, then the PDP-11), which were among the first commercially viable minicomputers, although for several years DEC itself did not encourage the use of Unix. * DEC produced widely used and influential interactive operating systems, including OS-8, TOPS-10, TOPS-20, RSTS/E, RSX-11, RT-11, and OpenVMS. PDP computers, in particular the PDP-11 model, inspired a generation of programmers and software developers. Some PDP-11 systems more than 25 years old (software and hardware) are still being used to control and monitor factories, transportation systems and nuclear plants. DEC was an early champion of time-sharing systems. * The command-line interfaces found in DEC's systems, eventually codified as DCL, would look familiar to any user of modern microcomputer CLIs; those used in earlier systems, such as CTSS, IBM's JCL, or Univac's time-sharing systems, would look utterly alien. Many features of the CP/M and MS-DOS CLI show a recognizable family resemblance to DEC's OSes, including command names such as DIR and HELP and the "name-dot-extension" file naming conventions. * Notes-11 and its follow-on product, VAX Notes, were two of the first examples of online collaboration software, a category that has become to be known as groupware. Len Kawell, one of the original Notes-11 developers, later joined Lotus Development Corporation and contributed to their Lotus Notes product. * The MUMPS programming language, with its built-in database, was developed on the PDP-7, 9, and 15 series machines. MUMPS is still widely used in medical information systems, such as those provide by Meditech and Epic Systems.

* VAX and MicroVAX computers (very widespread in the 1980s) running VMS formed one of the most important proprietary networks, DECnet, which linked business and research facilities. The DECnet protocols formed one of the first peer-to-peer networking standards, with DECnet phase I being released in the mid-1970s. Email, file sharing, and distributed collaborative projects existed within the company long before their value was recognized in the market. * The LA36 and LA120 dot matrix printers became industry standards and may have hastened the demise of the Teletype Corporation. * The VT100 computer terminal became the industry standard, implementing a useful subset of the ANSI X3.64 standard, and even today terminal emulators such as HyperTerminal, PuTTY and Xterm still emulate a VT100 (or its more capable successor, the VT220). * DEC invented Digital Linear Tape (DLT), formerly known as CompacTape, which began as a compact backup medium for MicroVAX systems, and later grew to capacities of 800 gigabytes. * Work on the first hard-disk-based MP3 player, the Personal Jukebox, started at the DEC Systems Research Center. (The project was started about a month before the merger into Compaq was completed.) * DEC's Western Research Lab created the Itsy Pocket Computer. This was developed into the Compaq iPaq line of PDAs, which replaced the Compaq Aero PDA.

* DEC, Intel and Xerox, through their collaboration to create the DIX standard, were champions of Ethernet, but DEC is the company that made Ethernet commercially successful. Initially, Ethernet-based DECnet and LAT protocols interconnected VAXes with DECserver terminal servers. Starting with the Unibus to Ethernet adapter, multiple generations of Ethernet hardware from DEC were the de facto standard. The CI "computer interconnect" adapter was the industry's first network interface controller to use separate transmit and receive "rings". * DEC also invented clustering, an operating system technology that treated multiple machines as one logical entity. Clustering permitted sharing of pooled disk and tape storage via the HSC50/70/90 and later series of Hierarchical Storage Controllers (HSC). The HSCs delivered the first hardware RAID 0 and RAID 1 capabilities and the first serial interconnects of multiple storage technologies. This technology was the forerunner to architectures such as Network of Workstations, which are used for massively cooperative tasks such as web searches and drug research. * The X Window System is the network transparent window system used on Unix and Linux and available on other operating systems such as MacOS. It was developed at MIT jointly between Project Athena and the Laboratory for Computer Science. DEC was the primary sponsor for the project, which was a contemporary of the GNU Project but not associated with it. * In the period 1994–99 Linus Torvalds developed versions of Linux on early AlphaServer systems provided by the engineering department. Compaq software engineers developed special Linux kernel modules. A well-known Linux distribution that ran on AlphaServer systems was Red Hat 7.2. Another distribution that ran on Alpha was Gentoo Linux. * DEC was one of the first businesses connected to the Internet, with ''dec.com'', registered in 1985, being one of the first of the now ubiquitous ''.com'' domains. DEC's ''gatekeeper.dec.com'' was a well-known software repository during the pre-World Wide Web days, and DEC was also the first computer vendor to open a public website, on 1 October 1993. The popular AltaVista, created by DEC, was one of the first comprehensive Internet search engines. (Although Lycos was earlier, it was much more limited.) * DEC once held the Class A IP address block 16.0.0.0/8.

* Digital Federal Credit Union (DCU) is a credit union which was chartered in 1979 for employees of DEC. Today its field of membership is open to existing family members, over 900 different sponsors, several communities in Massachusetts and several organizations. Many of the sponsors are companies that had acquired pieces of DEC. * Matrix management

Originally the users' group was called DECUS (Digital Equipment Computer User Society) during the 1960s to 1990s. When Compaq acquired DEC in 1998, the users group was renamed CUO, the Compaq Users' Organisation. When HP acquired Compaq in 2002, CUO became HP-Interex, although there are still DECUS groups in several countries. In the United States, the organization is represented by the Encompass organization; currently Connect.