The New York ''Daily News'', officially titled the ''Daily News'', is a left-wing American newspaper based in New York City. It was founded in 1919 by Joseph Medill Patterson as the ''Illustrated Daily News''. It was the first U.S. daily printed in tabloid format. It reached its peak circulation in 1947, at 2.4 million copies a day. As of 2019 it was the eleventh-highest circulated newspaper in the United States. Today's ''Daily News'' is not connected to the earlier ''New York Daily News'', which shut down in 1906.

The ''Illustrated Daily News'' was founded Patterson and his cousin, Robert R. McCormick. The two were co-publishers of the ''Chicago Tribune'' and grandsons of Tribune Company founder Joseph Medill. as an imitation of the successful British newspaper ''Daily Mirror''. When Patterson and McCormick could not agree on the editorial content of the Chicago paper, the two cousins decided at a meeting in Paris that Patterson would work on the project of launching a Tribune-owned newspaper in New York. On his return, Patterson met with Alfred Harmsworth, who was the Viscount Northcliffe and publisher of the ''Daily Mirror'', London's tabloid newspaper. Impressed with the advantages of a tabloid, Patterson launched the ''Daily News'' on June 26, 1919 as ''Illustrated Daily News''. The ''Daily News'' was owned by the Tribune Company until 1993.

The ''Daily News'' was not an immediate success, and by August 1919, the paper's circulation had dropped to 26,625. Still, New York's many subway commuters found the tabloid format easier to handle, and readership steadily grew. By the time of the paper's first anniversary in June 1920, circulation had climbed over 100,000 and by 1925, over a million. Circulation reached its peak in 1947, at 2.4 million daily and 4.7 million on Sunday. The ''Daily News'' carried the slogan "New York's Picture Newspaper" from 1920 to 1991, for its emphasis on photographs. A camera has been part of the newspaper's logo from day one. The paper's later slogan, developed from a 1985 ad campaign, is "New York's Hometown Newspaper", while another has been "The Eyes, the Ears, the Honest Voice of New York". The ''Daily News'' continues to include large and prominent photographs, for news, entertainment and sports, as well as intense city news coverage, celebrity gossip, classified ads, comics, a sports section, and an opinion section. News-gathering operations were, for a time, organized by staff using two-way radios operating on 173.3250 MHz (radio station KEA 871), allowing the assignment desk to communicate with its reporters who used a fleet of "radio cars". Excelling in sports coverage, prominent sports cartoonists have included Bill Gallo, Bruce Stark and Ed Murawinski. Columnists have included Walter Kaner. Editorial cartoonists have included C. D. Batchelor. In 1948, the ''News'' established WPIX (Channel 11 in New York City), whose call letters were based on the ''News''s nickname of "New York's Picture Newspaper"; and later bought what became WPIX-FM, which is now known as WFAN-FM. The television station became a Tribune property outright in 1991, and remains in the former Daily News Building. The radio station was purchased by Emmis Communications, and since 2014 has been owned by CBS Radio as an FM simulcast of its AM namesake. The paper briefly published a Monday-Friday afternoon counterpart, ''Daily News Tonight'', between August 19, 1980 and August 28, 1981; this competed with the ''New York Post'', which had launched a morning edition to complement its evening newspaper in 1978. Occasional "P.M. Editions" were published as extras in 1991, during the brief tenure of Robert Maxwell as publisher. From August 10, 1978, to November 5, 1978 a multi-union strike shut down the three major New York City newspapers. No editions of the ''News'' were printed during this time. In 1982, and again in the early 1990s during a newspaper strike, the ''Daily News'' almost went out of business. In the 1982 instance, the parent Tribune Company offered the tabloid up for sale. In 1991, millionaire Robert Maxwell offered financial assistance to the ''News'' to help it stay in business. Upon his death later that year, the ''News'' seceded from his publishing empire which soon splintered under questions about whether Maxwell had the financial backing to sustain it. Existing management, led by editor James Willse, held the ''News'' together in bankruptcy; Willse became interim publisher after buying the paper from the Tribune Company. Mort Zuckerman bought the paper in 1993. The ''News'' also maintains local bureaus in the Bronx, Brooklyn, and Queens, at City Hall, within One Police Plaza, and at the various state and federal courthouses in the city. In January 2012, former ''News of the World'' and ''New York Post'' editor Colin Myler was appointed editor-in-chief of the ''Daily News''. Myler was replaced by his deputy Jim Rich in September 2015. , it was the ninth-most widely circulated daily newspaper in the United States. By 2019, it was ranked eleventh. On September 4, 2017, Tronc (now, Tribune Publishing), the publishing operations of the former Tribune Company (which had spun out its publishing assets to separate them from its broadcast assets), announced that it had acquired the ''Daily News''. Tronc had bought the ''Daily News'' for $1, assuming "operational and pension liabilities". By the time of purchase, circulation had dropped to 200,000 on weekdays and 260,000 on Sundays. In July 2018, Tronc fired half of the paper's editorial staff, including the editor-in-chief, Jim Rich. Rich was replaced by Robert York, Publisher and Editor-in-Chief of Tronc-owned ''The Morning Call'' in Allentown, Pennsylvania. The paper's social media staff were included in the cut; images and memes that were later deleted were posted on its Twitter feed.

''New York Times'' journalist Alan Feuer said the ''Daily News'' focuses heavily on "deep sourcing and doorstep reporting", providing city-centered "crime reportage and hard-hitting coverage of public issues ..rather than portraying New York through the partisan divide between liberals and conservatives". According to Feuer, the paper is known for "speaking to and for the city’s working class" and for "its crusades against municipal misconduct". ''The New York Times'' has described the ''Daily News''s editorial stance as "flexibly centrist" with a "high-minded, if populist, legacy". For over five decades, the ''News'' was a staunchly Republican newspaper, in line with its sister publication, the ''Chicago Tribune'', supporting isolationism in the early stages of World War II. By the mid-1970s however, it began shifting its stance, and during the 1990s, it gained a reputation as a moderately liberal alternative to the right-wing ''Post'' (which until 1980 had been a Democratic bastion). The newspaper endorsed Republican George W. Bush in the 2004 presidential election, Democrat Barack Obama in 2008, Republican Mitt Romney in 2012, Democrat Hillary Clinton in 2016, and Democrat Joe Biden in 2020. 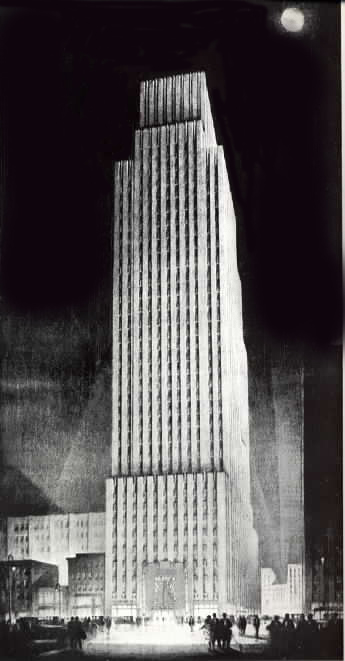 From its founding, it was based at 25 City Hall Place, just north of City Hall, and close to Park Row, the traditional home of the city's newspaper trade. In 1921 it moved to 23 Park Place, which was in the same neighborhood. The cramped conditions demanded a much larger space for the growing newspaper. From 1929 to 1995, the ''Daily News'' was based in 220 East 42nd Street near Second Avenue, an official city and national landmark designed by John Mead Howells and Raymond Hood. The paper moved to 450 West 33rd Street (also known as 5 Manhattan West) in 1995, but the 42nd Street location is still known as The News Building and still features a giant globe and weather instruments in its lobby. (It was the model for the ''Daily Planet'' building of the first two ''Superman'' films). The former ''News'' subsidiary WPIX-TV remains in the building. The subsequent headquarters of the ''Daily News'' at 450 West 33rd Street straddled the railroad tracks going into Pennsylvania Station. The building is now the world headquarters of the Associated Press and is part of Manhattan West. In June 2011, the paper moved its operations to two floors at 4 New York Plaza in lower Manhattan. Sixteen months later, the structure was severely damaged and rendered uninhabitable by flooding from Hurricane Sandy. In the immediate aftermath, news operations were conducted remotely from several temporary locations, eventually moving to office space at the Jersey City printing plant. In early 2013, operations moved to rented space at 1290 Avenue of the Americas near Rockefeller Center—just four blocks north of its rival ''New York Post.'' The staff returned to the permanent 4 New York Plaza location in early November 2013. In August 2020, the ''Daily News'' closed its Manhattan headquarters.

In 1993, the ''Daily News'' consolidated its printing facilities near Liberty State Park in Jersey City, New Jersey. In 2009, the paper spent $150 million on printing presses as part of its change to full-color photographs. In 2011, the company spent $100 million to buy three new presses, using a $41.7 million Urban Transit Hub Tax Credit from the State of New Jersey.

The ''Daily News'' has won eleven Pulitzer Prizes. In 1998, ''Daily News'' columnist Mike McAlary won the Pulitzer Prize for Commentary for his multi-part series of columns (published in 1997) on Abner Louima, who was sodomized and tortured by New York City police officers. In 2007, the ''News'' won the Pulitzer Prize for Editorial Writing for a series of thirteen editorials, published over five months, that detailed how more than 12,000 rescue workers who responded after the September 11 attacks had become ill from toxins in the air. The Pulitzer citation said that the award was given to the paper "for its compassionate and compelling editorials on behalf of Ground Zero workers, whose health problems were neglected by the city and the nation." In 2017, the ''Daily News'' was awarded the Pulitzer Prize for Public Service in collaboration with non-profit ProPublica "for uncovering, primarily through the work of reporter Sarah Ryley, widespread abuse of eviction rules by the police to oust hundreds of people, most of them poor minorities."

In 1928, a ''News'' reporter strapped a small camera to his leg, and shot a photo of Ruth Snyder being executed in the electric chair. The next day's newspaper carried the headline "DEAD!". On October 29, 1975, President Gerald Ford gave a speech denying federal assistance to spare New York City from bankruptcy. The front page of the October 30, 1975 ''Daily News'' read: "FORD TO CITY: DROP DEAD". Ford later said the headline had played a role in his losing the 1976 presidential election. In the year leading up to the 2016 presidential election, the paper's headlines became more provocative, helping to rejuvenate it, and with more opinionated editorials with the aforementioned headlines, once again in an effort to demonstrate its place in the city's media. Following the 2015 San Bernardino shooting, in which 14 people were killed, the paper's front page displayed "GOD ISN'T FIXING THIS" along with tweets from Republican politicians offering thoughts and prayers. The paper advocated for tighter gun laws, condemning what it described as "empty platitudes and angry rhetoric" rather than action "in response to the ongoing plague of gun violence in our country." The provocative headline received both praise and criticism. In January 2016, after Republican senator and presidential candidate Ted Cruz of Texas disparaged "New York values" in a Republican primary debate, the ''News'' responded with a cover page headline reading "DROP DEAD, TED" and showing the Statue of Liberty giving the middle finger.

The ''Daily News'' supported the Iraq War. On March 14, 2003, six days before the 2003 invasion of Iraq, the ''Daily News'' reported "President Bush is targeting an aggressive, dangerous, psychotic dictator who has stockpiled weapons of mass destruction and would use them without compunction. ... With Saddam in power, there can be no peace. One argument you hear raised against war is fear of retaliation: America mustn't upset the terrorists. After 9/11, does this even need to be rebutted? Terrorists have killed thousands of Americans already and thirst for more. Fighting back is a necessity, unless people want the peace of the grave." On December 20, 2016, ''Daily News'' columnist Gersh Kuntzman compared the assassination of the Russian Ambassador to Turkey, Andrei Karlov, to the assassination of Nazi German diplomat Ernst vom Rath by Jewish student Herschel Grynszpan, saying "justice has been served." Russia has demanded an official apology from ''Daily News''.