Click Here for Items Related To - Culture of Cambodia


. Throughout Cambodia's long history, religion has been a major source of cultural inspiration. Over nearly three millennia, Cambodians have developed a unique Cambodian culture and belief system from the syncreticism of indigenous animistic beliefs and the Indian religions of Buddhism and Hinduism. Indian culture and civilization, including its languages and arts reached mainland Southeast Asia around the 1st century AD. It is generally believed that seafaring merchants brought Indian customs and culture to ports along the Gulf of Thailand and the Pacific en route to trade with China. The Kingdom of Funan was most probably the first Cambodian state to benefit from this influx of Indian ideas. There is also French influence as well.

The Golden age of Cambodia was between the 9th and 14th century, during the Angkor period, during which it was a powerful and prosperous empire that flourished and dominated almost all of inland Southeast Asia. However, Angkor would eventually collapse after much in-fighting between royalty and constant warring with its increasingly powerful neighbors, notably Siam and Dai Viet. Many temples from this period however, like Bayon and Angkor Wat still remain today, scattered throughout Thailand, Cambodia, Laos, and Vietnam as a reminder of the grandeur of Khmer arts and culture. Cambodia's unparalleled achievements in art, architectures, music, and dance during this period have had a great influence on many neighboring kingdoms, namely Thailand and Laos. The effect of Angkorian culture can still be seen today in those countries, as they share many close characteristics with current-day Cambodia.

The Angkorian architects and sculptors created temples that mapped the cosmic world in stone. Khmer decorations drew inspiration from religion, and mythical creatures from Hinduism and Buddhism were carved on walls. Temples were built in accordance to the rule of ancient Khmer architecture that dictated that a basic temple layout include a central shrine, a courtyard, an enclosing wall, and a moat. Khmer motifs use many creatures from Buddhist and Hindu mythology, like the Royal Palace in Phnom Penh, use motifs such as the garuda, a mythical bird in Hinduism. The architecture of Cambodia developed in stages under the Khmer empire from the 9th to the 15th century, preserved in many buildings of the Angkor temple. The remains of secular architecture from this time are rare, as only religious buildings were made of stonpe. The architecture of the Angkor period used specific structural features and styles, which are one of the main methods used to date the temples, along with inscriptions. In modern rural Cambodia, the nuclear family typically lives in a rectangular house that may vary in size from four by six meters to six by ten meters. It is constructed of a wooden frame with gabled thatch roof and walls of woven bamboo. Khmer houses are typically raised as much as three meters on stilts for protection from annual floods. Two ladders or wooden staircases provide access to the house. The steep thatch roof overhanging the house walls protects the interior from rain. Typically a house contains three rooms separated by partitions of woven bamboo. The front room serves as a living room used to receive visitors, the next room is the parents' bedroom, and the third is for unmarried daughters. Sons sleep anywhere they can find space. Family members and neighbors work together to build the house, and a house-raising ceremony is held upon its completion. The houses of poorer persons may contain only a single large room. Food is prepared in a separate kitchen located near the house but usually behind it. Toilet facilities consist of simple pits in the ground, located away from the house, that are covered up when filled. Any livestock is kept below the house. Chinese and Vietnamese houses in Cambodian towns and villages are typically built directly on the ground and have earthen, cement, or tile floors, depending upon the economic status of the owner. Urban housing and commercial buildings may be of brick, masonry, or wood.

Cambodia is predominantly Buddhist with 80% of the population being Theravada Buddhist, 1% Christian and the majority of the remaining population follow Islam, atheism, or animism. , Siem Reap, Cambodia. Buddhism has existed in Cambodia since at least the 5th century CE. Theravada Buddhism has been the Cambodian state religion since the 13th century CE (excepting the Khmer Rouge period), and is currently estimated to be the faith of 90% of the population. A smaller number of Cambodians, mostly of Vietnamese and Chinese descent, practice Mahayana Buddhism. The main orders of Buddhism practiced in Cambodia are Dhammayuttika Nikaya and Maha Nikaya. 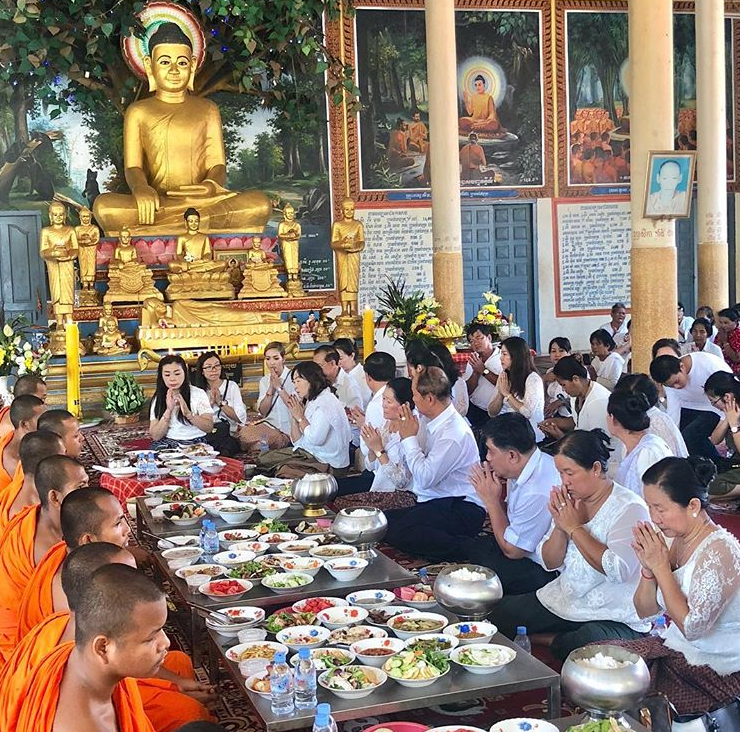 Islam is the religion of a majority of the Cham (also called Khmer Islam) and Malay minorities in Cambodia. According to Po Dharma, there were 150,000 to 200,000 Muslims in Cambodia as late as 1975. Persecution under the Khmer Rouge eroded their numbers, however, and by the late 1980s they probably had not regained their former strength. All of the Cham Muslims are Sunnis of the Shafi'i school. Po Dharma divides the Muslim Cham in Cambodia into a traditionalist branch and an orthodox branch. Christianity was introduced into Cambodia by Roman Catholic missionaries in 1660. However, it made little headway at first, particularly among Buddhists. In 1972 there were probably about 20,000 Christians in Cambodia, most of whom were Roman Catholics. According to Vatican statistics, in 1953, members of the Roman Catholic Church in Cambodia numbered 120,000, making it, at that time, the second largest religion in the country. In April 1970, just before repatriation, estimates indicate that about 50,000 Catholics were Vietnamese. Many of the Catholics remaining in Cambodia in 1972 were Europeans—chiefly French. American Protestant missionary activity increased in Cambodia, especially among some of the hill tribes and among the Cham, after the establishment of the Khmer Republic. The 1962 census, which reported 2,000 Protestants in Cambodia, remains the most recent statistic for the group. Observers reported that in 1980 there were more registered Khmer Christians among the refugees in camps in Thailand than in all of Cambodia before 1970. Kiernan notes that, until June 1980, five weekly Protestant services were held in Phnom Penh by a Khmer pastor, but that they had been reduced to a single weekly service after police harassment. There are around 21,300 Catholics in Cambodia which represents only 0.15% of the total population. There are no dioceses, but there are three territorial jurisdictions - one Apostolic Vicariate and two Apostolic Prefectures. Highland tribal groups, most with their own local religious systems, probably number fewer than 100,000 persons. The Khmer Loeu have been loosely described as animists, but most tribal groups have their own pantheon of local spirits. In general they see their world filled with various invisible spirits (often called yang), some benevolent, others malevolent. They associate spirits with rice, soil, water, fire, stones, paths, and so forth. Sorcerers or specialists in each village contact these spirits and prescribe ways to appease them. In times of crisis or change, animal sacrifices may be made to placate the anger of the spirits. Illness is often believed to be caused by evil spirits or sorcerers. Some tribes have special medicine men or shamans who treat the sick. In addition to belief in spirits, villagers believe in taboos on many objects or practices. Among the Khmer Loeu, the Rhade and Jarai groups have a well-developed hierarchy of spirits with a supreme ruler at its head.