The ''Croix de Guerre'' (, ''Cross of War'') is a military decoration of France. It was first created in 1915 and consists of a square-cross medal on two crossed swords, hanging from a ribbon with various degree pins. The decoration was awarded during World War I, again in World War II, and in other conflicts. The Croix de Guerre was also commonly bestowed on foreign military forces allied to France. The Croix de Guerre may be awarded either as an individual award or as a unit award to those soldiers who distinguish themselves by acts of heroism involving combat with the enemy. The medal is awarded to those who have been "mentioned in dispatches", meaning a heroic deed or deeds were performed meriting a citation from an individual's headquarters unit. The unit award of the Croix de Guerre with palm was issued to military units whose members performed heroic deeds in combat and were subsequently recognized by headquarters.

There are three distinct ''Croix de Guerre'' medals in the French system of honours: Furthermore, the French collaborationist government created two ''croix'' during World War II. These ''croix'' are now illegal under French law and wearing them is outlawed: The ''Croix'' was created by a law of April 2, 1915, proposed by French deputy Émile Briant. The Croix reinstated and modified an older system of mentions in dispatches, which were only administrative honours with no medal accompanying them. The sculptor Paul-André Bartholomé created the medal, a bronze cross with swords, showing the effigy of the republic. The French Croix represents a mention in dispatches awarded by a commanding officer, at least a regimental commander. Depending on the officer who issued the mention, the ribbon of the Croix is marked with extra pins. * Mentioned in Despatches: ** a bronze star for those who had been mentioned at the regiment or brigade level. ** a silver star, for those who had been mentioned at the division level. ** a silver-gilt (gold) star for those who had been mentioned at the corps level. ** a bronze palm for those who had been mentioned at the army level. ** a silver palm stands for five bronze ones. ** a silver-gilt (gold) palm for those who had been mentioned at the Free French Forces level (World War II only). The French Croix de guerre des TOE was created in 1921 for wars fought in theatres of operation outside France. It was awarded during the Indochina War, Korean War, and various wars in the decades that followed. It is the only version of the Croix de Guerre still considered active, though it has not been presented since the Kosovo War in 1999. When World War II broke out in 1939, a new Croix de Guerre was created by Édouard Daladier. It was abolished by Vichy Government in 1941, which created a new Croix de Guerre. In 1943 General Giraud in Algiers created another Croix de Guerre. Both the Vichy and Giraud Croix were abolished by General de Gaulle in 1944, who reinstated the 1939 Croix. The Croix de Guerre takes precedence between the Ordre national du Mérite and the Croix de la Valeur Militaire, the World War I Croix being senior to the World War II one, itself senior to the TOE Croix.

The Croix can be awarded to military units, as a manifestation of a collective Mention in Despatches. It is then displayed on the unit's flag. A unit, usually a regiment or a battalion, is always mentioned at the army level. The Croix is then a Croix de Guerre with palm. Other communities, such as cities or companies can be also awarded the Croix. When a unit is mentioned twice, it is awarded the ''fourragère'' of the ''Croix de Guerre''. This ''fourragère'' is worn by all men in the unit, but it can be worn on a personal basis: those permanently assigned to a unit, at the time of the mentions, were entitled to wear the fourragère for the remainder of service in the military. Temporary personnel, or those who had joined a unit after the actions which had been mentioned, were authorized to wear the award while a member of the unit but would surrender the decoration upon transfer. This temporary wearing of the fourragère only applied to the French version of the Croix de Guerre. The 2nd Battalion Devonshire Regiment of the British Army along with 5 Battery RA were awarded the French Croix de Guerre with palm for its gallant defence of Bois des Buttes on 27 May 1918, the first day of the Third Battle of the Aisne. The Croix de Guerre with palm was also awarded to 2nd Battalion Kings Shropshire Light Infantry for Gallantry near Bligny, part of the Second Battle of the Marne. Several other British Army battalions would receive the award before the end of the war.

Individuals in World War I 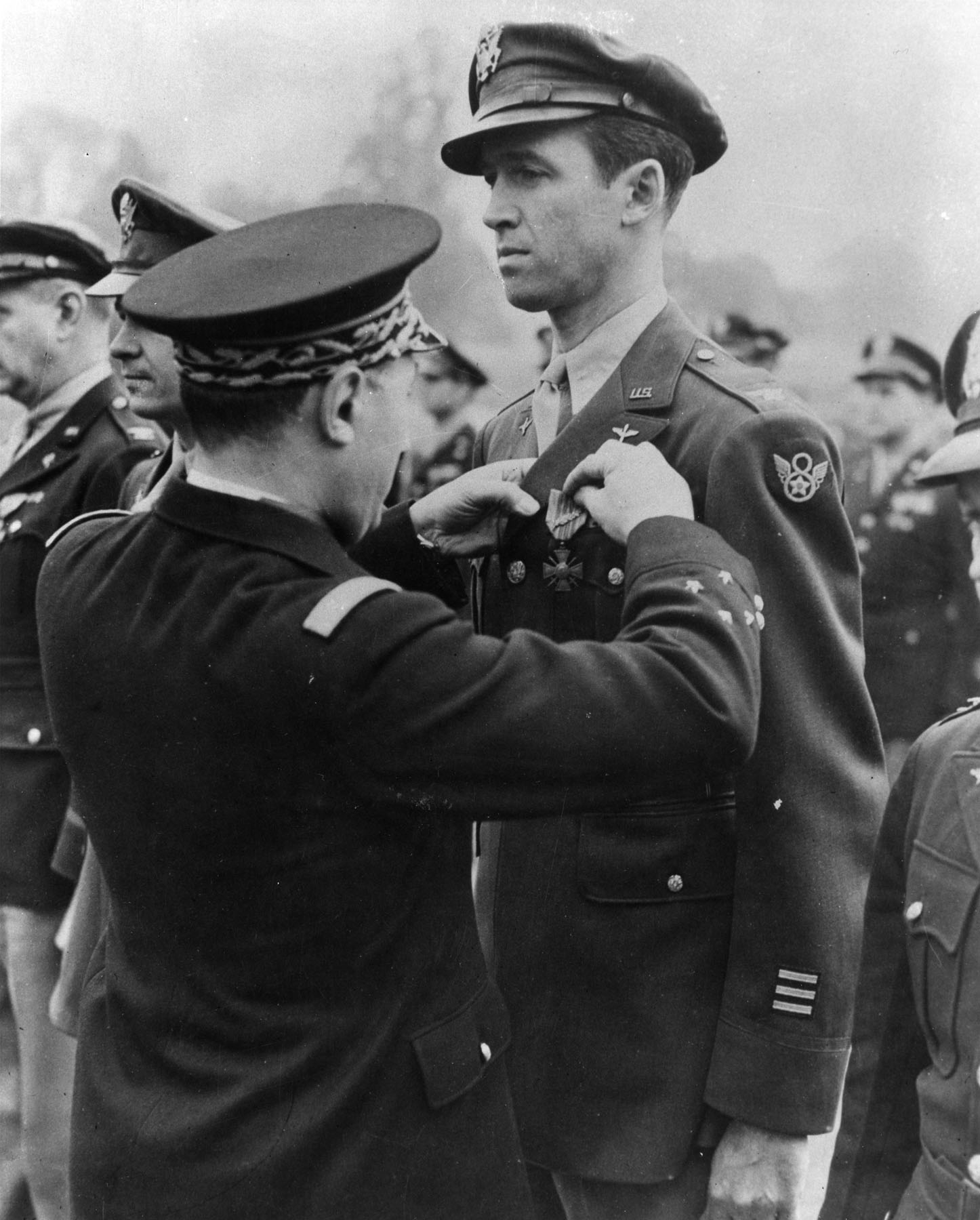 * George Scales, British farmer/Commanding Officer LCT-7011 awarded the Croix de Guerre during D-Day. Presented to him in 2007 by French Attache Naval, Capitaine de Vaisseau Jean Nicolas Gauthier of the Ministere de la Defense. * Desmond J. Scott, a New Zealand fighter pilot and Group Captain who flew for the RAF. He was awarded both the Belgian and the French Croix de Guerre. * Major Edward Cecil Scott, A Battery Commander, 5 Canadian Anti-Tank Regiment, for actions taken during the Battle of the Falaise Pocket * Jan Smuts, South African Prime Minister. * Raymond Franklin Gibson, American Ambulance Corp. Macon, Georgia. * Mahmoud Harbi, Vice President of the Government Council of French Somaliland. * George Reginald Starr, Special Operations Executive. * James Stewart, American actor awarded the Croix de Guerre with Palm in 1944. * Violette Szabo, a British SOE agent who was sent into occupied France. Her first mission was a success, but during her second mission she was captured and tortured. Eventually sent to Ravensbruck concentration camp, she was executed on 5 February 1945 (at age 23); awarded the George Cross posthumously. * Alfred Touny (1886–1944), a leader of the French Resistance, now buried in the Mémorial de la France combattante. * James Tracey, 3191945 Private in the 6th (Border) Battalion - King's Own Scottish Borderers; At Evrecy, in July 1944, he was with his CO (Lieutenant-Colonel J.G. Shillington) on a visit to a forward Convoy when a shell exploded nearby severely wounding the CO. Pte Tracey, though wounded himself by the blast, showed great presence of mind, tended to his CO’s wounds and got him back to the Regimental Aid Post in his carrier then returned to Battalion HQ to report before going back himself. Awarded the Croix de Guerre with Bronze Star. * Matt Urban, highly decorated American combat soldier with awards including the Medal of Honor and 7 Purple Hearts *Nancy Wake of the SOE was the highest decorated Allied servicewoman of the war. Awarded the Croix de Guerre three times for service with the French maquis. * F.F.E. Yeo-Thomas, member of RF Section of the SOE. A Special Operations Executive Liaison officer, he worked with the Bureau Central de Renseignements et d'Action (BCRA) of the Free French forces organising and coordinating resistance in both Vichy and Occupied France. *US Army Staff Sergeant Joseph R. Beyrle * Major Richard D. Winters, fought with Easy Company, 506th Parachute Infantry Regiment, 101st Airborne Division from the Normandy invasion to Operation Market Garden to the Battle of the Bulge. He was besieged at Bastogne and aided with taking of Hitler's Eagle's Nest in Austria. *Jack M. Greener, Medic, K Company - 409th Regiment (103rd Infantry). In addition to the Croix de Guerre he received a Purple Heart, Bronze Star and Silver Star with Silver Oakleaf Cluster *Colonel Donald J. Richardson earned Croix de Guerre with gold star. Commander of the 2nd battalion, 304th infantry of the 76th division, also receiving silver star, bronze star with oak leaf cluster, purple heart and Legion of Merit after his death in 1965. Served as Colonel in Korea, 8th Army, and later as senior military advisor in the Connecticut National Guard. *First Sgt. Edward J. Stone of the US Army 40th General Hospital in Paris was awarded the Croix de Guerre with bronze star two times for his service during World War II. *Glenn Wayne Ferguson an American while serving in the French Foreign Legion during Desert Storm was awarded the Croix du Guerre TOE etoile du bronze was mentioned in dispatches at Brigade level.

During World War I, Cher Ami, a carrier pigeon with the 77th Division, helped save the lives of 194 American soldiers by carrying a message across enemy lines in the heat of battle. Cher Ami was shot in the chest and leg, losing most of the leg to which the message was attached, and blinded in one eye, but continued the 25-mile flight avoiding shrapnel and poison gas to get the message home. Cher Ami was awarded the French Croix de Guerre with Palm for heroic service. She later died from the wounds received in battle and was enshrined in the Smithsonian Institution. Aram Karamanoukian, a lieutenant-general of the Syrian army of Armenian descent, who participated in the First Arab-Israeli war, was awarded the Croix de Guerre.

Info about the French and Belgian medals, with pictures
{{italic title Category:Military awards and decorations of France Category:Recipients of the Croix de Guerre (France)