Click Here for Items Related To - Chilean transition to democracy


The Chilean transition to democracy began when a Constitution establishing a transition itinerary was approved in a plebiscite. From March 11, 1981 to March 1990, several organic constitutional laws were approved, leading to the final restoration of democracy. After the 1988 plebiscite, the 1980 Constitution (which is still in effect today) was amended to ease provisions for future amendments to the constitution, create more seats in the senate, diminish the role of the National Security Council, and equalize the number of civilian and military members (four members each). Christian Democrat Patricio Aylwin served from 1990 to 1994 and was succeeded by another Christian Democrat, Eduardo Frei Ruiz-Tagle (son of Eduardo Frei Montalva), leading the same coalition for a six-year term. Ricardo Lagos Escobar of the Socialist Party and the Party for Democracy led the Concertacion to a narrower victory in the 2000 presidential election. His term ended on March 11, 2006, when Michelle Bachelet of the Socialist Party took office. Center-right investor and businessman Sebastián Piñera, of the National Renewal, assumed the presidency on March 11, 2010, after Bachelet's term expired. Bachelet returned to the office on March 11, 2014, being succeeded by Piñera in the following term (2018–2022).

1988 plebiscite and reform of the Constitution

Passed under tight military control in 1980, the Chilean constitution's legal dispositions were designed to lead to the convocation of all citizens to a plebiscite during which the Chilean people would ratify a candidate, proposed by the Chief of Staff of the Chilean Armed Forces and by the General Director of the Carabineros, the national police force, and who would become the President of Chile for an eight-year term. In 1980, this meant that the Chilean people were supposed to approve Augusto Pinochet's candidacy, assuring him popular legitimacy and the sanction of a vote. If the people refused the junta's chosen candidate, the military would relinquish political control to the civilians, leading to presidential and parliamentary democratic elections the following year, putting an end to the military government. In 1987, Pinochet's government passed a law allowing the creation of political parties and another law allowing the opening of national registers of voters. If the majority of the people voted "yes" to Pinochet's plebiscite, he would have remained in power for the next eight years. Instead, Congress was elected and installed on March 11, 1990.

Context and causes of Pinochet's decision to follow the Constitution

Various factors led to Pinochet's decision to resume this procedure, including the situation in the Soviet Union, where Mikhail Gorbachev had initiated the glasnost and the perestroika democratic reforms. Those reforms led to the fall of the Berlin Wall in 1989 and to the official end of the Cold War, which was an important factor. The Cold War had important consequences in South America, considered by the United States to be a full part of the Western Bloc, in contrast with the Eastern Bloc, a division born with the end of World War II and the Yalta Conference. Following the 1959 Cuban Revolution and the local implementation in several countries of Che Guevara's foco theory, the US waged a war in South America against the "Communists subversives," leading to support in Chile of the right-wing, which would culminate with the coup of 1973 in Chile. In a few years, all of South America was covered by similar military dictatorships, called ''juntas''. In Paraguay, Alfredo Stroessner was in power since 1954; in Brazil, left-wing President João Goulart was overthrown by a military coup in 1964; in Bolivia, General Hugo Banzer overthrew leftist General Juan José Torres in 1971; in Uruguay, considered the "Switzerland" of South America, Juan María Bordaberry seized power in the June 27th 1973 coup. A "Dirty War" was waged all over the continent, culminating with Operation Condor, an agreement between security services of the Southern Cone and other South American countries to repress and assassinate political opponents. In 1976, militaries seized power in Argentina and supported the 1980 "Cocaine Coup" of Luis García Meza Tejada in Bolivia, before training the Contras in Nicaragua where the Sandinista National Liberation Front, headed by Daniel Ortega, had taken power in 1979. Similar military coups took place in Guatemala and in El Salvador. In the 1980s, however, the situation progressively evolved in the world as in South America, despite a renewal of the Cold War from 1979 to 1985, the year during which Gorbachev replaced Konstantin Chernenko as leader of the USSR. 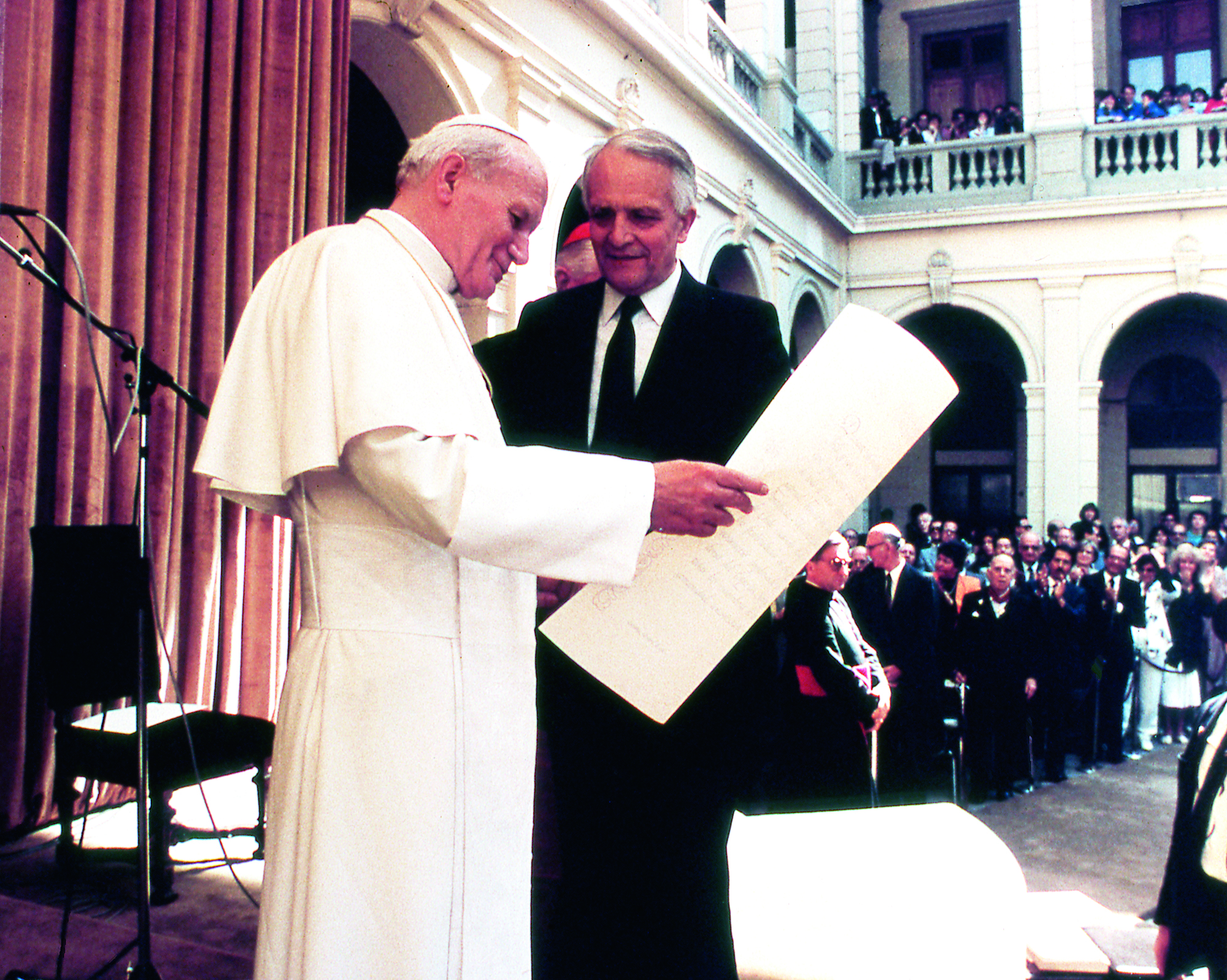 Another alleged reason of Pinochet's decision to call for elections was Pope John Paul II's April 1987 visit to Chile: he visited Santiago, Viña del Mar, Valparaíso, Temuco, Punta Arenas, Puerto Montt and Antofagasta. Before his pilgrimage to Latin America, the pontiff criticized Pinochet's regime as "dictatorial" while speaking with reporters. According to ''The New York Times'', he was "using unusually strong language" to criticize Pinochet and told the journalists that the Church in Chile must not only pray, but actively fight for the restoration of democracy in Chile. During his 1987 Chilean visit, the Polish pope asked Chile's 31 Catholic bishops to campaign for free elections in the country. According to George Weigel, he held a meeting with Pinochet during which they discussed the topic of the return to democracy. John Paul II allegedly pushed Pinochet to accept a democratic opening of the regime, and even called for his resignation. In 2007, Cardinal Stanisław Dziwisz, acting as Pope John Paul II's secretary, confirmed that the Pope asked Pinochet to step down and transfer power over to civilian authorities during his visit. John Paul II also supported the Vicariate of Solidarity during his visit, which was a Church-led pro-democracy, anti-Pinochet organization. John Paul II visited the Vicariate of Solidarity's offices, spoke with its workers, and "called upon them to continue their work, emphasizing that the Gospel consistently urges respect for human rights." Some have erroneously accused John Paul II of affirming Pinochet's regime by appearing with the Chilean ruler in his balcony. However, Cardinal Roberto Tucci, organizer of John Paul II's pilgrimages, revealed that Pinochet tricked the pontiff by telling him he would take him to his living room, while in reality he took him to his balcony. Tucci claims that the pontiff was "furious." Whatever the case, political advertisement was legalized on 5 September 1987, and became a key element of the campaign for the "NO" to the referendum, which countered the official campaign which presaged a return to a Popular Unity government in case of Pinochet's defeat. Finally, the "NO" to Pinochet won with 55.99% of the votes, against 44.01% of the votes. As a result, presidential and legislative elections were called for the following year. Furthermore, in July 1989, a constitutional referendum took place after long negotiations between the government and the opposition. If approved, 54 constitutional reforms were to be implemented, among which the reform of the way that the Constitution itself could be reformed, the restriction of state of emergency dispositions, the affirmation of political pluralism, the strengthening of constitutional rights as well as of the democratic principle and participation to the political life. All parties in the political spectrum supported the reforms, with the exception of the small right-wing Avanzada Nacional and other minor parties. Reforms were passed with 91.25% of the vote.

The ''Concertación'' coalition, which supported the return to democracy, gathered the Christian Democrat Party (PDC), the Socialist Party (PS), the Party for Democracy (PPD) and the Social Democrat Radical Party (PRSD). Christian Democrat Patricio Aylwin won a sweeping victory in the December 1989 elections, the first democratic elections since the 1970 election won by Salvador Allende. Patricio Aylwin had gathered 3,850,023 votes (55.17%), while the center-right supermarket tycoon Francisco Javier Errázuriz Talavera from the UCCP party managed to take 15.05% of the vote, whose main effect was lowering right-wing candidate Hernán Büchi's votes to 29.40% (approximately 2 million votes).

The ''Concertación'' coalition dominated Chilean politics for much of the next two decades. In February 1991, it established the National Commission for Truth and Reconciliation, releasing the Rettig Report on human rights violations during Augusto Pinochet's dictatorship. This report, contested by human rights NGOs and associations of political prisoners, counted only 2,279 cases of "disappearances" which could be proved and registered. Of course, the very nature of "disappearances" made such investigations very difficult, while many victims were still intimidated by the authorities, and did not dare go to the local police center to register themselves on lists, since the police officers were the same as during the dictatorship. Several years later, the same problem arose with the 2004 Valech Report, which counted almost 30,000 victims of torture, among testimony from 35,000 people. However, the Rettig Report did list important detention and torture centers, such as the Esmeralda ship, the Víctor Jara Stadium, Villa Grimaldi, etc. Registration of victims of the dictatorship, and the following trials in the 2000s of military personnel guilty of human rights violations, dominated the struggle for the recognition of crimes committed during the dictatorship by human rights NGOs and associations of political prisoners, many of whom resided in exile. Besides implementing the Rettig Commission, Aylwin's government established a ''Comisión Especial de Pueblos indígenas'' (Special Commission of Indigenous People), whose report provided the intellectual framework of the "Indigenous Law" (''ley indígena'') or law n° 19 253. The law went into effect on September 28, 1993 and recognized the Mapuche people as an inherent part of the Chilean nation. Other indigenous people officially recognized included Aymaras, Atacameñas, Collas, Quechuas, Rapa-Nui, Yámanas and Kawashkars. Despite this state proclamation of indigenous rights, conflicts brought by land-occupations and Mapuche's claims led to state repression and the use of the anti-terrorist law against Mapuche activists, a law instated by the military ''junta''.

Preparing for the 1993 election, the Concertación held primaries in May 1993, which pitted left-wing Ricardo Lagos (PPD) against Christian-Democrat Eduardo Frei Ruiz-Tagle, (PDC), the son of former President Eduardo Frei Montalva (1911–1982, President from 1964 to 1970). Eduardo Frei won these primaries by a large majority of 63%. The right-wing, grouped as the Alliance for Chile, also held primaries between 2 candidates: Sebastián Piñera of the National Renewal (RN) the largest right-wing party at the time and who had supported the "NO" during the 1988 plebiscite on the return to civilian rule, and Arturo Alessandri Besa, former member of the National Party (PN), who was opposed to Eduardo Frei in the 1970 presidential election and was a representative of the Independent Democrat Union (UDI). Alessandri won those primaries, and thus represented the Alliance for Chile against the Concertación. Others candidates included José Piñera, who was the former Minister in the early 1980s that had implemented the law granting property of copper to the Chilean Armed Forces and presented himself as an independent (6%); ecologist Manfred Max-Neef (5.55%), representative of the ''Left-Wing Democratic Alternative,'' which gathered the Communist Party (PCC), MAPU (part of the Popular Unity coalition of Allende) and the Christian Left Party; Eugenio Pizarro Poblete (less than 5%); and finally Cristián Reitze Campos of the left-wing Humanist Party (1.1%). On 28 May 1993, the ''Boinazo'' took place, during which paratroopers surrounded the Chilean Army headquarters located close by to the Palacio de la Moneda. The motive for the military uprising was the opening of investigations concerning the "Pinocheques", or checks received by Pinochet for a total amount of $3 million in the frame of kickbacks from an arms deal. A few days before (and unnoticed at the time), Jorge Schaulsohn, President of the Chamber of Deputies, had also denounced irregularities during arms trade committed by the Chilean Army through the intermediary of the FAMAE (Factories and Arsenals of the Army of Chile) — which was later connected to the Gerardo Huber case, a Chilean Army Colonel and agent of DINA who was assassinated the previous year.