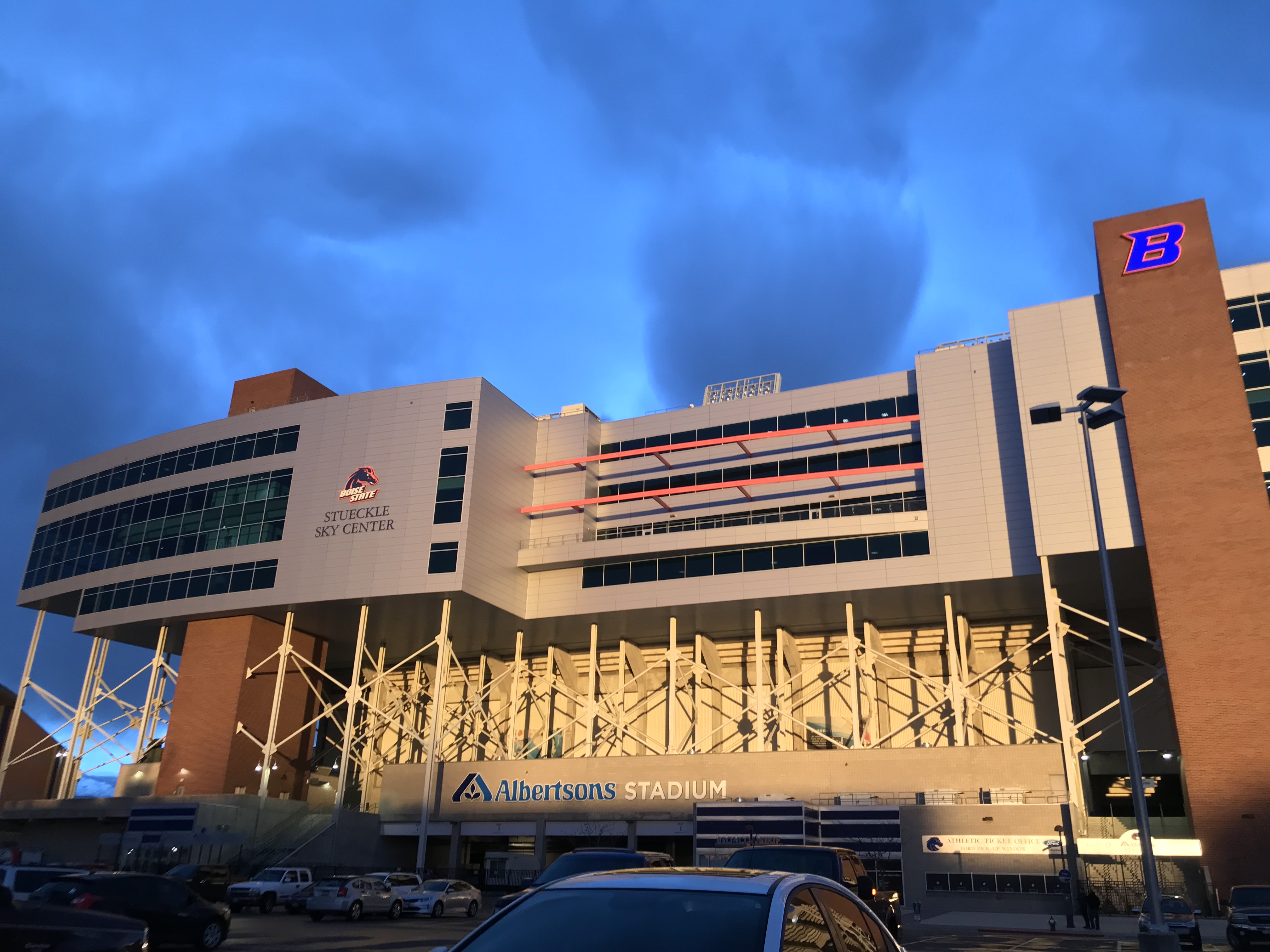 Boise State University (BSU) is a public research university in Boise, Idaho. Founded in 1932 by the Episcopal Church, it became an independent junior college in 1934 and has been awarding baccalaureate and master's degrees Boise State offers more than 100 graduate programs, including the MBA and MAcc programs in the College of Business and Economics; Masters and PhD programs in the Colleges of Engineering, Arts & Sciences, and Education; and the MPA program in the School of Public Service. It is classified among "R2: Doctoral Universities – High research activity". The university's intercollegiate athletic teams, the Broncos, compete in the Mountain West Conference (MWC) in NCAA Division I.

The school became Idaho's third state university in 1974, after the University of Idaho (1889) and Idaho State University (1963). Boise State awards associate, bachelor's, master's, and doctoral degrees, and is accredited by the Northwest Commission on Colleges and Universities. , it has over 75,000 living alumni.

The campus is located near downtown Boise, on the south bank of the Boise River, opposite Julia Davis Park. With more than 170 buildings, the campus is at an elevation of above sea level, bounded by Capitol Boulevard on the west and Broadway Avenue to the east. Boise State has spent over $300 million since 2003 on academic, residential, and athletics facilities across campus. Through the 1930s, the site was the city's airport. 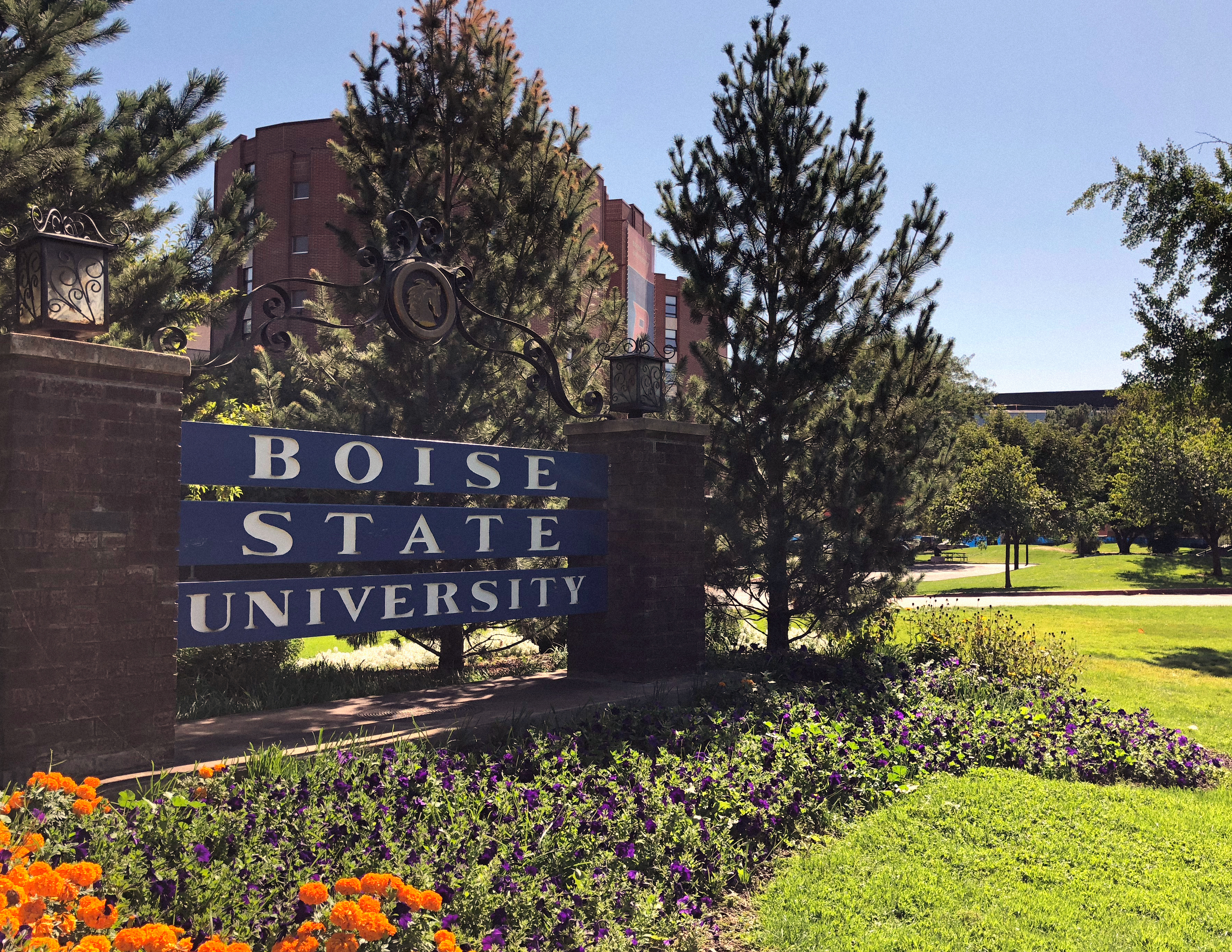 Boise State broke ground in May 2017 on a $42 million Center for the Fine Arts, which will house sculpture, metalwork, painting, graphic design and other visual arts, as well as gallery space and a digital “World Museum” devoted to high-tech arts experiences.

The school's library is named for grocery pioneer and longtime Boise resident Joe Albertson. It houses more than 650,000 books, over 100,000 periodicals, 107 public terminals for student use, and access to over 300 online databases. The physical structure also features a Starbucks and public lounge area, and houses the College of Innovation and Design, including the fast growing degree program in Gaming, Interactive Mobile and Media.

The "Velma V. Morrison Center for the Performing Arts" has 2,000 seats in its primary performance hall, and hosts a wide variety of fine arts performances, including the Broadway in Boise series, concerts and other events. The venue opened its doors in April 1984.

The computer science department moved away from the main campus to a new building in downtown Boise. The CS department occupies 53,549 gross square feet, the full second and third floors of the building. The university's CS program is now located in the same building as Clearwater Analytics and within short walking distance of about 20 more of Boise's top technology companies.

The Micron Center for Materials Research was established with a $25 million gift from Micron Technology, which is headquartered in Boise. Scheduled for completion in 2020, the building was designed by Hummel Architects and Anderson Mason Dale Architects, with Hoffman Construction as lead contractor. The building is designed with one research wing, planned to house sensitive equipment, and state of the art research laboratories and a second wing, to hold classrooms, and office space. This latest donation by Micron marks a total of $40 million invested in materials science and engineering programs and associated research at BSU, resulting in a full complement of degrees in materials science and engineering including bachelors, masters and doctoral programs.

Boise State's more than 190 fields of study are organized these colleges: * Arts and Sciences * Business and Economics * Education * Engineering * Graduate Studies * Health Sciences * School of Public Service * Innovation and Design Boise State's fall enrollment in 2016 was 23,886 students, and approximately 76 percent of these students were Idaho residents. More than 90 percent of Boise State's first-year students come directly from high school. In the 2015-2016 school year, Boise State awarded diplomas to 3,916 distinct graduates, including 18 doctorates, 10 education specialists, 670 master's and 2,998 bachelor's degrees. The university has "High Research Activity" as scored by the Carnegie Classification of Institutions of Higher Education.

Since 1971 the university has published the ''Western Writers Series'', monographs focusing on authors of the American Frontier and American West. The university also maintains an on-line library of publications and documents related to Idaho history through the Albertsons Library. A not-for-profit literary publisher, Ahsahta was founded in 1974 at Boise State University to preserve the best works by early poets of the American West. Its name, ahsahta, is the Mandan word meaning “Rocky Mountain bighorn sheep,” and was first recorded by members of the Lewis and Clark expedition; the founding editors chose the word to honor the press's original mission to publish Western poetry. The Center for Idaho History and Politics offers a nine-credit place-based field school called "Investigate Boise" which focuses on heritage, government, and urban affairs. Each series of classes results in a student written and faculty edited publication.

Boise State's athletic nickname is the Broncos, and the official mascot is Buster Bronco. Men's teams include football, basketball, cross country, track and field, golf, tennis, and baseball (to resume play in 2020 after a forty-year hiatus). The baseball program was then cut in July 2020. Its women's teams include volleyball, basketball, cross country, swimming and diving, soccer, track and field, gymnastics, golf, softball and tennis. Most of these teams compete in the Mountain West Conference (MWC). Boise State College joined the NCAA in 1970 in the university division (Division I), except for football, which was in the college division (later Division II) for the first eight seasons. Big Sky Conference football moved up to the new Division I-AA (now FCS) in 1978, and the Broncos won the national championship two years later. BSU moved up to Division I-A (now FBS) in 1996 in the Big West Conference, joined the Western Athletic Conference (WAC) in 2001, and the Mountain West in 2011. The last two moves came after the conferences dropped sponsorship of football.

Albertsons Stadium is home to the Boise State football program. It hosted to the NCAA Division I Track and Field Championships in 1994 and 1999, and has been the home to the Famous Idaho Potato Bowl since 1997.

Boise State Football has a long history of success starting with the junior college days and the national championship team of 1958, coached by the father of Bronco football, Lyle Smith. Now named Lyle Smith Field in Albertsons Stadium, the synthetic turf field was standard green before 1986. "The Blue" was the idea of athletic director Gene Bleymaier and was the first non-green football field in the country. Through 2019, Boise State's home record was in 34 seasons on The Blue, with fifteen conference championships. Ground was broken after the 1969 season, and it opened in September 1970 with a capacity of 14,500. Subsequent expansions were completed in 1975 and 1997, and current capacity sits at around 37,000. In August 2010, the university unveiled a $100 million expansion plan for Bronco Stadium. The first stage will include: adding a new facility to the north endzone to house the football offices, weight room, training room, equipment room and locker room; removing the track; and adding a 13,200-seat grandstand behind the north endzone. Later stages include: lowering the field to add 3,300 seats; completing the south endzone horseshoe; building an east side skybox; and renovating the east concourse. Seating capacity for the fully expanded Bronco Stadium will exceed 55,000.

Known as the "Boise State University Pavilion" until June 2004, and “Taco Bell Arena” between 2004-2019, ExtraMile Arena is home to BSU basketball, wrestling, women's gymnastics, community events, and several concerts each year. Opened in May 1982, the arena seats 12,380 on three levels. It has hosted rounds one and two of the NCAA basketball tournament on eight occasions from 1983 to 2009, and the third and fourth rounds of the NCAA women's tournament in 2002. The construction of the pavilion began in February 1980 on the site of the tennis courts and a portion of the BSU baseball field. The Bronco baseball team played their home games in 1980 at Borah Field (now Bill Wigle Field) at Borah High School, and the program was discontinued that May. The tennis courts were rebuilt immediately west of the arena, on the former baseball field (infield & right field).

Boise State is considered a commuter school, due to more than 86% of its students living off-campus. The dominant form of school-supported housing are co-ed residence halls.