Arthur Betz Laffer (; born August 14, 1940) is an American economist and author who first gained prominence during the Reagan administration as a member of Reagan's Economic Policy Advisory Board (1981–89). Laffer is best known for the Laffer curve, an illustration of the concept that there exists some tax rate between 0% and 100% that will result in maximum tax revenue for government. In certain circumstances, this would allow governments to cut taxes, and simultaneously increase revenue and economic growth. Laffer was an economic advisor to Donald Trump's 2016 presidential campaign. On June 19, 2019, President Donald Trump awarded Laffer with the Presidential Medal of Freedom for his contributions in the field of economics.

Laffer was born in Youngstown, Ohio, the son of Marian Amelia "Molly" (née Betz), a homemaker and politician, and William Gillespie Laffer, president of the Clevite Corporation. He was raised in the Cleveland, Ohio area. He is a Presbyterian, and graduated from Cleveland's University School high school in 1958. Laffer earned a B.A. in economics from Yale University (1963) and an M.B.A. (1965) and a Ph.D. in economics (1972) from Stanford University.

Laffer was the first to hold the title of Chief Economist at the Office of Management and Budget (OMB) under George Shultz from October 1970 to July 1972. During the years 1972 to 1977, Laffer was a consultant to Secretary of the Treasury William Simon, Secretary of Defense Donald Rumsfeld and Secretary of the Treasury George Shultz. Laffer was a member of President Reagan's Economic Policy Advisory Board for both of his terms (1981–1989) and was a founding member of the Reagan Executive Advisory Committee for the presidential race of 1980. Laffer served as a member of the Executive Committee of the Reagan/Bush Finance Committee in 1984. In 1986, Laffer was a candidate for the Republican nomination for the U.S. Senate—which he lost in the California primary to U.S. Congressman Ed Zschau, who lost in the general election to the incumbent, Democrat Alan Cranston. Laffer identifies himself as a staunch fiscal conservative. However, he has stated publicly that he voted for President Bill Clinton in 1992 and 1996. Laffer references President Clinton's conservative fiscal and unregulated market policies as cornerstones of his support. In 2018, Laffer wrote the book ''Trumponomics'' with conservative economic commentator Stephen Moore, wherein they lauded the Trump administration's economic policies. In the book, Moore and Laffer argue that the Trump administration's 2017 tax plan would raise growth rates to as much as 6% and not increase budget deficits. In a 2019 review of the book, Greg Mankiw, a conservative economics professor at Harvard University, said the authors "do not build their analysis on the foundation of professional consensus or serious studies from peer-reviewed journals. . . . The Laffer curve is undeniable as a matter of economic theory. There is certainly some level of taxation at which cutting tax rates would be win-win. But few economists believe that tax rates in the United States have reached such heights in recent years; to the contrary, they are likely below the revenue-maximizing level." The one issue where Moore and Laffer disagree with Trump is on the issue of free trade, which the duo supports. Previously, in 2016, Laffer said that he believed that then-candidate Trump was "going to be okay on trade" and lauded Trump's understanding of trade. Laffer regularly writes opinion articles in ''The Wall Street Journal'' and ''The Washington Times''. On April 15, 2019, Laffer blamed the Great Recession on Barack Obama, "who I believe was the reason why we had the Great Recession. As he got closer and closer to winning the markets collapsed." In 2020, Laffer advised the Trump administration on how to re-open the economy amid the coronavirus pandemic. Laffer argued for halting coronavirus rescue relief spending, calling instead for payroll tax cuts. He advocated for taxes on non-profit organizations in education and the arts, as well as for salary reductions for professors and government officials. He argued against expansion of unemployment aid, arguing it discouraged people from working. 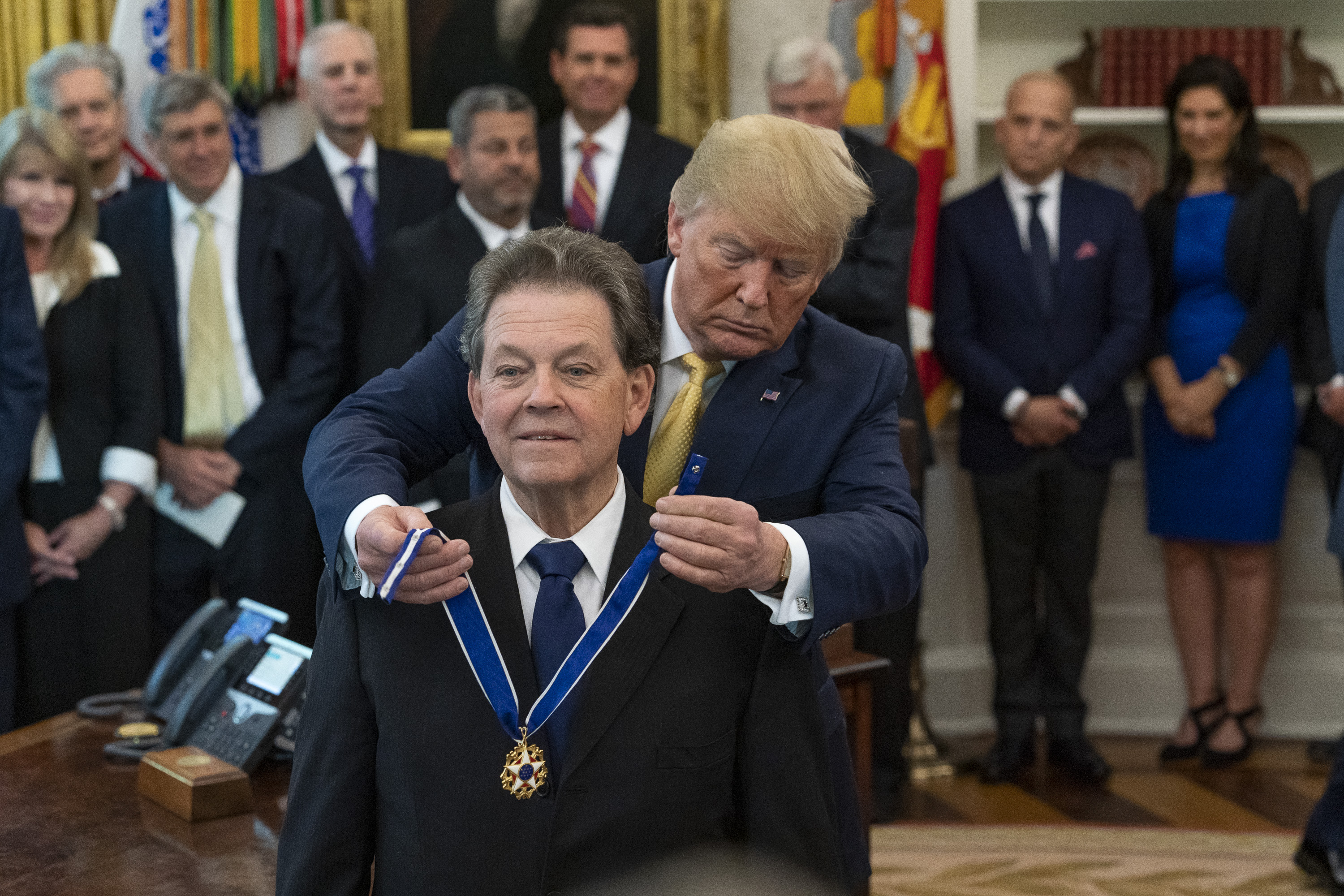 On May 31, 2019, The White House announced that President Trump would be awarding Laffer with the Presidential Medal of Freedom on June 19, 2019. The Presidential Medal of Freedom is "the Nation's highest civilian honor, which may be awarded by the President to individuals who have made especially meritorious contributions to the security or national interests of the United States, to world peace, or to cultural or other significant public or private endeavors". The White House press released stated that Laffer was receiving the award for "public service and contributions to economic policy that have helped spur prosperity for our Nation". The press release said that Laffer as "one of the most influential economists in American history" due to popularizing the "Laffer Curve." Trump praised Laffer for policies that he said brought "greater opportunity for all Americans."

Although he does not claim to have invented the Laffer curve concept (Laffer, 2004), it was popularized with policy-makers following an afternoon meeting with Nixon/Ford Administration officials Dick Cheney and Donald Rumsfeld in 1974 in which he reportedly sketched the curve on a napkin to illustrate his argument. The term "Laffer curve" was coined by Jude Wanniski, who was also present. The basic concept was not new; Laffer himself says he learned it from Ibn Khaldun and John Maynard Keynes. The Laffer curve is an economic theory that shows the relationship between tax rates and the amount of tax revenue collected by governments. The Laffer Curve shows that there is a certain point between 0% and 100% where tax revenues are maximized. The curve suggests that starting from zero, an increase in tax rates will increase the government's tax revenue; after a certain point, however, continuing to increase tax rates will cause a decrease in tax revenue. This decrease in tax revenue can be explained by decreased incentives for work, production, etc. Laffer's postulate was that the tax rate that maximizes revenue was at a much lower level than previously believed: so low that current tax rates were above the level where revenue is maximized. While many economists believe that government spending to stimulate demand for products should be the solution for a poorly performing economy, Laffer argues that heavy taxes and regulation impede production, and therefore, government revenue. Numerous leading economists have rejected the view that a tax rate cut of current federal US income taxes can lead to increased tax revenue. When asked whether a "cut in federal income tax rates in the US right now would raise taxable income enough so that the annual total tax revenue would be higher within five years than without the tax cut," 96% of economists surveyed in 2012 disagreed. According to Greg Mankiw, most economists have been very skeptical of Laffer's contention that decreases in tax rates could increase tax revenue, at least in the United States. In his textbook, Mankiw states, "there was little evidence for Laffer's view that U.S. tax rates had in fact reached such extreme levels." Under the direction of conservative economist Douglas Holtz-Eakin, the Congressional Budget Office conducted a 2005 study on the fiscal effects of a 10% cut in federal income tax rates, finding that it resulted in a significant net revenue loss. Economist John Quiggin distinguishes between the Laffer curve and Laffer's analysis of tax rates. The Laffer curve was "correct but unoriginal", but Laffer's analysis that the United States was on the wrong side of the Laffer curve "was original but incorrect." Laffer was an economic adviser to Kansas Governor Sam Brownback, who in 2012 zeroed out state tax liability for approximately 330,000 of the top wage earners in the state, contending it would be a "shot of adrenaline into the heart of the Kansas economy." Laffer was paid $75,000 to advise in the creation of Brownback's tax cut plan, and gave Brownback his full endorsement, stating that what Brownback was doing was "truly revolutionary." The state, which had previously had a budget surplus, experienced a budget deficit of about $200 million in 2012. Drastic cuts to state funding for education and infrastructure were implemented to close budget deficits and the Kansas economy underperformed relative to neighboring states. Brownback's tax overhaul was described in a June 2017 article in ''The Atlantic'' as the United States' "most aggressive experiment in conservative economic policy". The drastic tax cuts had "threatened the viability of schools and infrastructure" in Kansas. A supermajority of lawmakers in the Kansas legislature, both Democrats and Republicans, repealed the tax cut in June 2017, overriding the veto of governor Brownback.

Awards that Laffer has received for his economic work: * 2 Graham and Dodd Awards from the Financial Analyst Federation for outstanding feature articles published in the ''Financial Analysts Journal'' * The Distinguished Service Award by the National Association of Investment Clubs * The Daniel Webster Award for public speaking by the International Platform Association * Distinguished University Professor of Economics from Mercer University in 2008 * His book ''The End of Prosperity: How Higher Taxes Will Doom the Economy-If We Let it Happen'' was nominated for the F.A. Hayek Book Award in 2009 * The Hayek Lifetime Achievement Award in 2016 * In December 2017, Laffer became the first recipient of the American Legislative Exchange Council's Laffer Award for Economic Excellence * Laffer was awarded the Presidential Medal of Freedom by President Donald Trump on June 19, 2019. Laffer has been widely acknowledged for his economic influence, including: * Listed in "A Gallery of the Greatest People Who Influenced Our Daily Business," in ''The Wall Street Journal'' on June 23, 1989 * Included in "A Dozen Who Shaped the '80s," in the ''Los Angeles Times'' on January 1, 1990 * His creation of the Laffer Curve was deemed a "memorable event" in financial history by the ''Institutional Investor'' in its July 1992 Silver Anniversary issue, "The Heroes, Villains, Triumphs, Failures, and Other Memorable Events." * Noted in ''Time'' magazine's March 29, 1999 cover story, "A Century of Science" for "his supply-side economic theories, which hold that reducing federal taxes spurs economic growth and, eventually, increases federal revenues" * ''Bloomberg Businessweek'' selected the Laffer Curve as one of the "85 Most Disruptive Ideas In Our History" for its 85th anniversary issue in 2014. Bloomberg produced
video
with Laffer, Dick Cheney and Donald Rumsfeld about the Laffer Curve and the "dinner napkin that changed the economy"