Anatoly Vasilyevich Lunacharsky (born Anatoly Aleksandrovich Antonov, – 26 December 1933) was a Russian Marxist revolutionary and the first Bolshevik Soviet People's Commissar (Narkompros) responsible for Ministry of Education as well as an active playwright, critic, essayist and journalist throughout his career.

Lunacharsky was born on 23 or 24 November 1875 in Poltava, Ukraine (then part of the Russian Empire) as the Legitimacy (family law), illegitimate child of Alexander Antonov and Alexandra Lunacharskaya, née Rostovtseva. His mother was then married to statesman Vasily Lunacharsky, whence Anatoly's surname and patronym. She later divorced Vasily Lunacharsky and married Antonov, but Anatoly kept his former name. In 1890, at the age of 15, Lunacharsky became a Marxism, Marxist. From 1894, he studied at the University of Zurich under Richard Avenarius for two years without taking a degree. In Zürich, he met European socialists including Rosa Luxemburg and Leo Jogiches and joined the Russian Social Democratic Labour Party.

In 1896, Luncharsky returned to Russia, where he was arrested and sent to Kaluga in Siberia through 1901–1902, when he returned to Kiev. In February 1902, he moved in with Alexander Bogdanov, who was working in a mental hospital in Vologda, Russia.

In 1903, the party split into Bolsheviks led by Vladimir Lenin and Mensheviks led by Julius Martov; in his memoirs, Lunacharsky recalls having sought to understand the causes of the split, although he ultimately came to represent the Bolsheviks in Paris. In 1907, he attended the International Socialist Congress, Stuttgart 1907, International Socialist Congress, held in Stuttgart. When the Bolsheviks in turn split into Lenin's supporters and Alexander Bogdanov's followers in 1908, Lunacharsky supported his brother-in-law Bogdanov in setting up ''Vpered''. Like many contemporary socialists (including Bogdanov), Lunacharsky was influenced by the empirio-criticism philosophy of Ernst Mach and Avenarius. Lenin opposed Machism as a form of subjective idealism and strongly criticised its proponents in his book ''Materialism and Empirio-criticism'' (1908). In 1909, Lunacharsky joined Bogdanov and Maxim Gorky at the latter's villa on the island of Capri, where they started a school for Russian socialist workers. In 1910, Bogdanov, Lunacharsky, Mikhail Pokrovsky and their supporters moved the school to Bologna, where they continued teaching classes through 1911. In 1913, Lunacharsky moved to Paris, where he started his own Circle of Proletarian Culture.

After the outbreak of World War I in 1914, Lunacharsky adopted an Internationalist/Defencist Schism, internationalist antiwar position which put him on a course of convergence with Lenin and Leon Trotsky. In 1915, Lunacharsky and Pavel Lebedev-Polianskii, Pavel Lebedev-Poliansky restarted the social democratic newspaper ''Vpered'' with an emphasis on proletarian culture. After the February Revolution of 1917, Lunacharsky left his family in Switzerland and returned to Russia. Like other internationalist social democrats returning from abroad, he briefly joined the Mezhraiontsy before they merged with the Bolsheviks in July–August 1917. In July 1917, the Kerensky government jailed him.

After the October Revolution of 1917, Lunacharsky was appointed head of the People's Commissariat for Education (Narkompros) in the first Soviet government and remained in that position until 1929. In 1921, ''The New York Times'' reported his resignation. 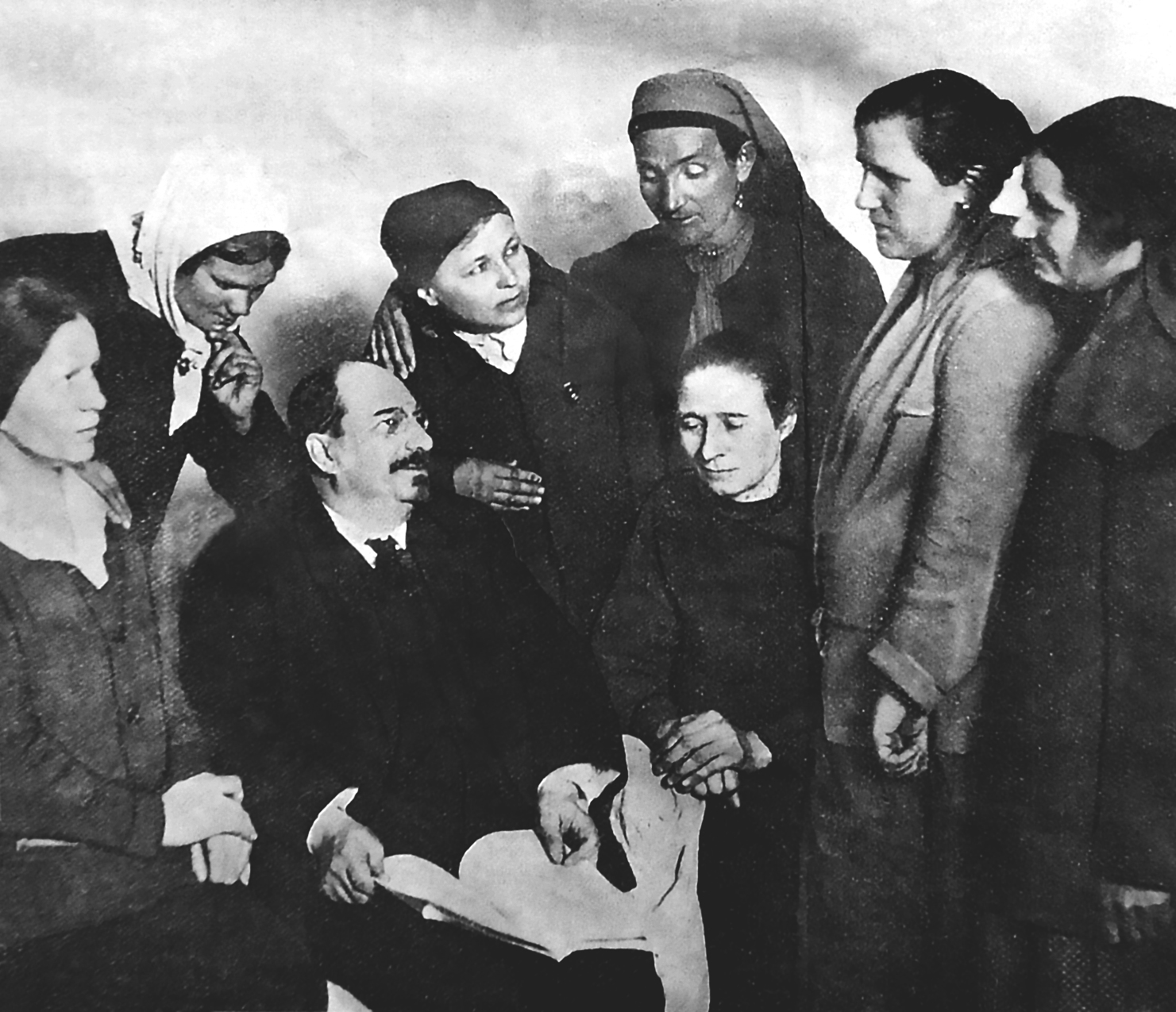 Lunacharsky was associated with the establishment of the Tovstonogov Theater, Bolshoi Drama Theater in 1919, working with Maxim Gorky, Alexander Blok and Maria Fyodorovna Andreyeva, Maria Andreyeva. He was also in charge of the Soviet state's first censorship system. Lunacharsky helped his former colleague Alexander Bogdanov start a semi-independent proletarian art movement called Proletkult. Lunacharsky also oversaw improvements in Russia's literacy rate. By arguing for their architectural importance, he argued for the protection of historic buildings against elements in the Bolshevik Party who wanted to destroy them. Lunacharsky directed some of the great experiments in public arts after the Revolution such as the agit-trains and agit-boats that circulated over all Russia spreading Revolution and revolutionary arts. He also gave support to Constructivism (art), constructivism's Meyerhold Theatre, theatrical experiments and the initiatives such as the ROSTA Windows, revolutionary posters designed and written by Vladimir Mayakovsky, Mayakovsky, Alexander Rodchenko, Rodchenko and others. While commissar, Lunacharsky's initiatives included the establishment of Isadora Duncan's school in Moscow, but he was also a playwright, critic, essayist and a widely admired man of culture. As the first Commissar of Enlightenment after the Bolshevik Revolution of 1917, he was credited with preserving much of Russia's cultural heritage. In June 1919, ''The New York Times'' decried Lunacharsky's efforts in education in an article entitle "Reds Are Ruining Children of Russia". It claimed that he was instilling a "system of calculated moral depravity [...] in one of the most diabolical of all measures conceived by the Bolshevik rulers of Russia". In 1929, Lunacharsky supported a change in the Soviet Union from Cyrillic to Latin alphabet.

In 1929 Lunacharsky was appointed to the Learned Council of the Soviet Union Central Executive Committee. He also became an editor for the Literature Encyclopedia (published 1929–1939). In 1930, Lunacharsky represented the Soviet Union at the League of Nations through 1932. In 1933, he was appointed Ambassador (diplomacy), ambassador to Spain, a post he never assumed as he died en route.

Lunacharsky died at 58 on 26 December 1933 in Menton, France en route to take up the post of Soviet ambassador to Spain as the conflict that would become the Spanish Civil War appeared increasingly inevitable. 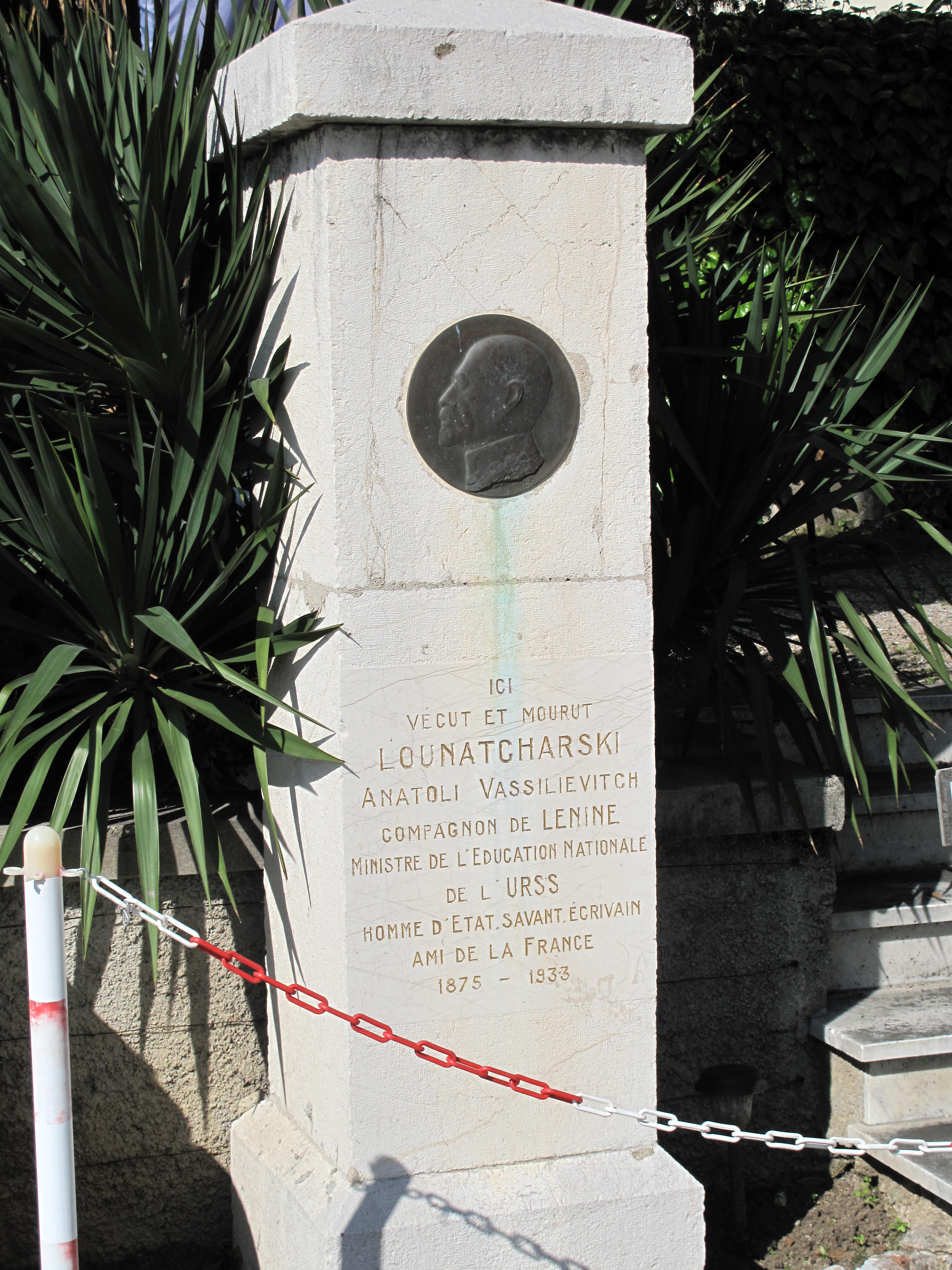 In 1902, he married Anna Alexandrovna Malinovkaya, Alexander Bogdanov's sister. They had one child, a daughter named Irina Lunacharsky. In 1922, he met Natalya Rozenel, an actress at the Maly Theatre (Moscow), Maly Theater. He left his family and married her. Lunacharsky was known as an art connoisseur and a critic. Besides Marxist dialectics, he had been interested in philosophy since he was a student. For instance, he was fond of the ideas of Johann Gottlieb Fichte, Frederich Nietzsche and Richard Avenarius. He could read six modern languages and two dead ones. Lunacharsky corresponded with H. G. Wells, George Bernard Shaw, Bernard Shaw and Romain Rolland. He met numerous other famous cultural figures such as Rabindranath Tagore and Nicholas Roerich. Lunacharsky once described Nadezhda Krupskaya as the "soul of Narkompros". Friends included Igor Moiseyev.

Lunacharsky's remains were returned to Moscow where his urn was buried in the Kremlin Wall Necropolis, a rare privilege during the Soviet era. During the Great Purge of 1936–1938, Lunacharsky's name was erased from the Communist Party's history and his memoirs were banned. A revival came in the late 1950s and 1960s, with a surge of memoirs about Lunacharsky and many streets and organizations named or renamed in his honor. During that era, Lunacharsky was viewed by the Soviet intelligentsia as an educated, refined and tolerant Soviet politician. In the 1960s, his daughter Irina Lunacharsky helped revive his popularity. Several streets and institutions were named in his honor. In 1971, Asteroid 2446 was named after Lunacharsky. Some Soviet-built orchestral harps also bear the name of Lunacharsky, presumably in his honor. These concert pedal harps were produced in Leningrad (now Saint Petersburg, Russia). ''The New York Times'' dubbed Nikolai Gubenko, last culture commissar of the Soviet Union, "the first arts professional since Anatoly V. Lunacharsky" because he seemed to "identify" with Lunacharsky.

Lunacharsky was also a prolific writer. He wrote literary essays on the works of several writers, including Alexander Pushkin, George Bernard Shaw and Marcel Proust. However, his most notable work is his memoirs, ''Revolutionary Silhouettes'', which describe anecdotes and Lunacharsky's general impressions of Lenin, Leon Trotsky and eight other revolutionaries. Trotsky reacted to some of Lunacharsky's opinions in his own autobiography, ''My Life (Trotsky autobiography), My Life''. In the 1920s, Lunacharsky produced Lyubov Popova's ''The Locksmith and the Chancellor'' at the Comedy Theater. Some of his works include: * ''Outlines of a Collective Philosophy'' (1909) * ''Self-Education of the Workers: The Cultural Task of the Struggling Proletariat'' (1918) * ''Three Plays'' (1923) * ''Revolutionary Silhouettes'' (1923) * ''Theses on the Problems of Marxist Criticism'' (1928) * ''Vladimir Mayakovsky, Innovator'' (1931) * ''George Bernard Shaw'' (1931) * ''Maxim Gorky'' (1932) * ''On Literature and Art'' (1965)


Works by Lunacharsky at Marxist internet archive
* Robert C Williams, 'From Positivism to Collectivism: Lunarcharsky and Proletarian Culture', in Williams, ''Artists in Revolution'', Indiana University Press, 1977
''Vasilisa the Wise''
(A play by Lunacharsky, in English) *