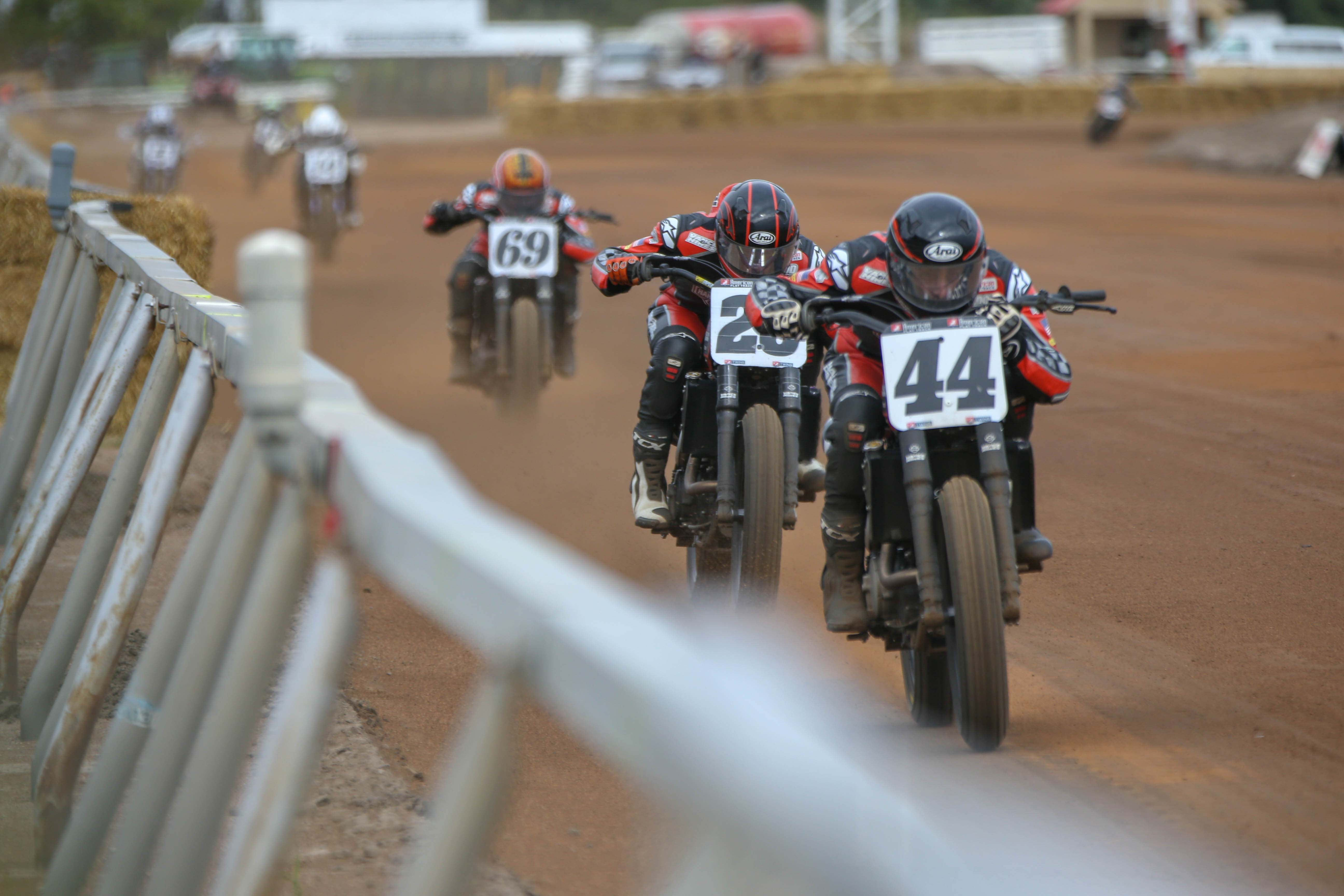 American Flat Track is an American motorcycle racing series. The racing series, founded and sanctioned by the American Motorcyclist Association (AMA) in 1954, originally encompassed five distinct forms of competitions including mile dirt track races, half-mile, short-track, TT steeplechase and road races. The championship was the premier motorcycle racing series in the United States from the 1950s up until the late 1970s. Following the 2016 season, AMA Pro Racing, the sanctioning body of the series, announced a restructured class system as well as a re-envisioning of the event format. The restructured class system consists of the AFT SuperTwins premier class, the AFT Singles class for young rising stars and the AFT Production Twins class featuring production-based, 649-800cc twin-cylinder engines.

In 1932, the AMA sanctioned a racing class called the Class A Dirt Track championship allowing for motorcycle manufacturers to enter prototype machinery. In 1933, the AMA introduced a new class called Class C which featured street-legal motorcycles in an effort to make motorcycle racing less expensive for ordinary motorcyclists. When manufacturers cutback on racing budgets during the Great Depression, it spelled the end of Class A competition and, the Class C championship became the most important championship. AMA crowned Indian-mounted Woodsie Castonguay its first Class C National Champion in 1935, and the final Class A champion was crowned in 1938. In the years prior to World War II, the Class C championship helped fuel an intense rivalry between Harley-Davidson and Indian, the two major American manufacturers of the period. During the Second World War, there were no championships held between 1942 and 1945. From 1946 to 1953, the AMA Grand National Champion was crowned based on the results of a single race, the Springfield Mile held at the Illinois State Fairgrounds Racetrack. Side-valve engines had a maximum displacement of 750cc, while overhead valve engines were limited to 500cc. In 1954, the Grand National Championship series was introduced featuring four different types of competitions: three of the competitions (Mile, Half-mile, TT) were held on dirt tracks, while the fourth was held on asphalt paved courses. With the demise of the Indian motorcycle company in 1953, the Harley-Davidson factory was left to dominate the series. Harley-Davidson rider Joe Leonard won the first Grand National Championship in 1954 and won the title two more times before moving on to a career in auto racing. Carroll Resweber became the first four-time champion, winning four consecutive championships for Harley-Davidson from 1958 to 1961. Since 1961 short-track events became part of the Championship; those races had a 250cc displacement limit.

In the 1960s, British manufacturers seeking to bolster sales in the burgeoning American motorcycle market, began to compete in the championship. Dick Mann won the national title for BSA in 1963, marking the first victory for a foreign manufacturer. Triumph would win three Grand National championships in four years with Gary Nixon winning back-to-back titles in 1967 and 1968, and Gene Romero taking another title in 1970.

New regulations for 1969 eliminated the displacement penalty for overhead valve engines; in dirt track events brakes were permitted for the first time. Mann would win a second crown for BSA in 1971 before the British motorcycle industry collapsed in the face of stiff technological competition from Japanese manufacturers. In 1973, Yamaha's Kenny Roberts would win the first Grand National championship for a Japanese company. Since 1973 the displacement limit for short-track events was increased to 360cc, but multi-cylinder two-stroke engines were still limited to 250cc. In 1975 the championship gained full sponsorship from R.J. Reynolds Tobacco and became known as Camel Pro Series. Between 1979 and 1982 the series was named Winston Pro Series, reverting to Camel brand in 1983. In 1976 dirt track engines were limited to a maximum of two cylinders; in 1977 the short track engines were limited to 250cc and limited to one cylinder. When the Yamaha team withdrew from the Grand National championship after the 1977 season, Harley-Davidson was left once again to dominate the series. By 1983, the Grand National Championship had become the best attended form of dirt track racing in America, either on two wheels or four wheels. This would be the high point for the championship as, other forms of motorcycle racing such as motocross and road racing began to overtake dirt tracking in popularity. Tammy Jo Kirk became the first woman to score GNC points in 1983. In 1984, Honda entered the championship and broke the Harley-Davidson stranglehold with Ricky Graham winning the championship. Honda followed with three consecutive national championships by Bubba Shobert before they withdrew in 1987, leaving Harley-Davidson once again as the sole major manufacturer in the series. In 1984 short-track rules granted a 500cc displacement limit for four-stroke engines. In the 1970s and on into the 1980s, the Grand National Championship proved to be a fertile training ground for world champion road racers as, AMA dirt track racers such as Kenny Roberts, Freddie Spencer, Eddie Lawson and Wayne Rainey all went on to win the 500cc road racing world championship. The motorcycle road racing technology of the late 1970s featured engines with power in excess of what the frames and tires of the day could handle. The resulting tire spin created a style of riding more reminiscent of dirt track riding, where sliding the rear tire to one side is used as a method to steer the motorcycle around a corner. This proved to be a great advantage to American dirt track racers who were accustomed to sliding their motorcycles. As Grand Prix motorcycle racing evolved into its current MotoGP formula with electronic traction control limiting rear wheel sliding, the advantage once held by former dirt trackers has been diminished.

After the departure of the Honda team in 1987, the Harley-Davidson factory racing team dominated the series with rider Scott Parker winning nine national championships within an eleven-year period. During this period, dirt track racing continued its decline, partly due to the fact that motocross and road racing motorcycles could be purchased directly from the manufacturers, whereas dirt track racers had to be hand-built.

* The Mile: A race held on an oval-shaped dirt course approximately one mile in length. The races became popular because of the availability of horse racing venues around the country, and are typically held during the off-season for horse racing. These events usually favor motorcycles with larger engine displacements such as the Indian Motorcycle FTR750 and Harley-Davidson XG750R. The races usually feature numerous lead changes with speeds of up to 140 miles per hour. * The Half-Mile: An event similar to a mile race, also held on an oval-shaped dirt course with a shorter lap distance. Despite the distance, tracks may vary in length, because they are often held on the same venues that hold World of Outlaws car events. * Short Track: A race held on an oval-shaped dirt course approximately a quarter mile in length. These tight courses have been held indoors at venues such as the Houston Astrodome and favor lighter motorcycles based on two-stroke motocross machinery. * TT Steeplechase: A race held on an irregularly shaped dirt course which usually features one right hand turn and one jump. This event also favors lighter motorcycles, but larger motorcycles have also been successful. The initials TT stand for Tourist Trophy, taking its name from the days when street-legal motorcycles were known as touring motorcycles hence, a tourist trophy signified a class for street-legal motorcycles. 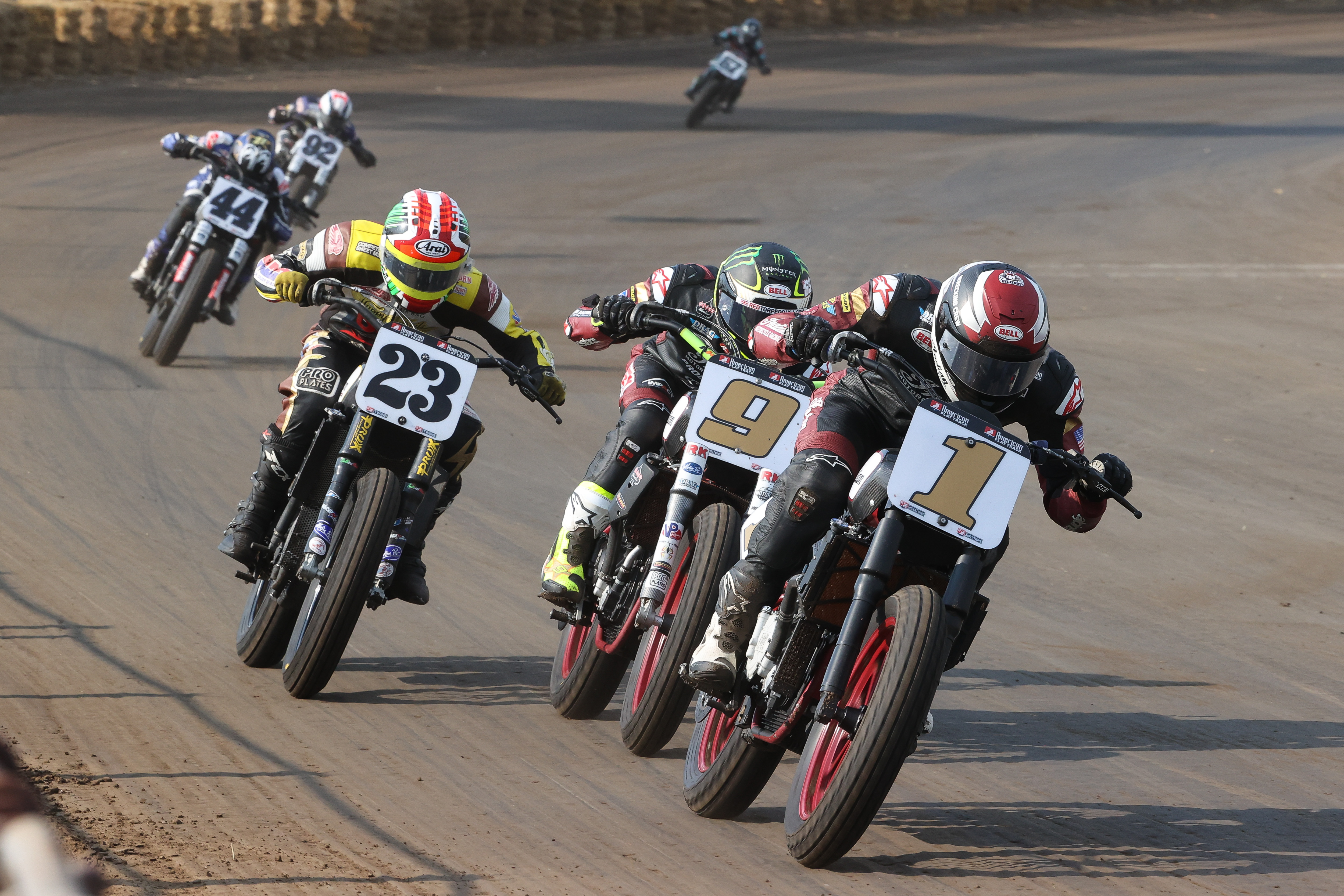 AFT SuperTwins is the pinnacle of dirt track motorcycle racing globally, and has been since the professional ranks were formalized as the Grand National Championship in 1954. Riders in this class represents a unity of elite teams and the most-skilled athletes who compete at every round of AFT competition. Each will race on custom-built, twin-cylinder motorcycles generating 90+ horsepower race bar-to-bar at speeds in excess of 140 mph, often drafting to the finish line and requiring a photo finish to determine the race winner. The motorcycles in this class contain the latest in motorsport technology and will be piloted by the fastest two-wheeled athletes on dirt.

* Horsepower: 90+ * Minimum weight: 310 lbs. * Top speed: 140+ MPH * 0–60 mph: Under 4 seconds * Tires: Dunlop, 19-inch, purpose-built flat track tires * Fuel: VP Racing Fuels C10 Unleaded * Eligible engines: Only 4-stroke twin-cylinder engines with prior, written approval by AMA Pro Racing are eligible for competition in AFT Twins. This includes both production engines designed for street motorcycles and racing-only engines. * Engine displacement: 649cc – 900cc with restrictions ** Production engines: Engines that were originally under 750cc may be bored and stroked but may not exceed 750cc as a final displacement. ** Racing-only engines: Engines may not exceed 750cc with a maximum allowable overbore of 0.045” per cylinder. Liquid cooled racing-only engines may not exceed 750cc. There is no provision for overbore.

The AFT Singles class is geared for cultivating young dirt track talent as riders hone their skills en route to the AFT Twins ranks. Up-and-coming competitors make their mark aboard production-based 450cc single-cylinder motorcycles offering upwards of 60 horsepower. Racing at speeds faster than 115 mph, the stars of tomorrow battle it out on motorcycles produced by Honda, Husqvarna, Kawasaki, KTM, Suzuki, Yamaha and Zaeta.

* Horsepower: 60+ * Minimum weight: 230 lbs. * Top speed: 115+ MPH * 0–60 mph: Under 4 seconds * Tires: Dunlop, 19-inch, purpose-built flat track tires * Fuel: VP Racing Fuels C10 Unleaded * Eligible engines: Only 4-stroke single-cylinder motorcycles homologated by AMA Pro Racing may be used in AFT Singles competition. AMA Pro Racing will only review applications for homologation from motorcycle manufacturers or their distributors or designated representatives. Once a motorcycle has been approved, it may be used until such time that it no longer complies with the technical rules. * Engine displacement: 251 – 450cc 4-stroke single-cylinder engines. * All single-cylinder engine displacements are absolute, with no overbore allowances. * Single-cylinder engines must maintain stock bore and stroke.

As AFT Singles riders progress and set their sights on becoming an AFT Twins rider, the AFT Production Twins class gives up-and-coming athletes the opportunity to race an AFT track on a twin-cylinder race bike without competing against the heavy hitters in contention for the AFT Twins championship. This class serves as a transition between the AFT Singles and AFT Twins classes.

American Flat Track has had an exclusive television partnership with NBCSN since the 2017 season. All 18 rounds air one-hour, tape-delayed telecasts on various nights throughout the summer and fall. Every session is streamed live on NBC Sports Gold's TrackPass.