Regalia is a Latin plurale tantum word that has different definitions. In one rare definition, it refers to the exclusive privileges of a sovereign. The word originally referred to the elaborate formal dress and dress accessories of a sovereign, but now the word usually refers to any type of elaborate formal dress and dress accessories.

The word stems from the Latin substantivation of the adjective ''regalis'', "regal", itself from ''rex'', "king". It is sometimes used in the singular, ''regale''.

The term can refer to the
rights Rights are law, legal, social, or ethics, ethical principles of Liberty, freedom or entitlement; that is, rights are the fundamental normative rules about what is allowed of people or owed to people according to some legal system, social conventi ...
, prerogatives, and privileges that are held exclusively by any sovereign, regardless of title (
emperor An emperor (from la, imperator, via fro, empereor) is a monarch, and usually the sovereignty, sovereign ruler of an empire or another type of imperial realm. Empress, the female equivalent, may indicate an emperor's wife (empress consort), m ...

, grand duke, etc.). An example of that is the right to mint coins, and especially coins that bear one's own
effigy An effigy is an often life-size sculptural representation of a specific person, or a prototypical figure. Lately, the term is mostly used for the make-shift dummies used for symbolic punishment in political protests and for the figures burned i ...
. In many cases, especially in feudal societies and generally weak states, such rights have in time been eroded by grants to, or usurpations by, lesser vassals.

Some
emblem An emblem is an abstract art, abstract or representational pictorial image that represents a concept, like a moral truth, or an allegory, or a person, like a king or saint. Emblems vs. symbols Although the words ''emblem'' and ''symbol'' are o ...

s,
symbol A symbol is a mark, sign, or word that indicates, signifies, or is understood as representing an idea, Object (philosophy), object, or wikt:relationship, relationship. Symbols allow people to go beyond what is known or seen by creating linkages ...
s, or paraphernalia possessed by rulers are a visual representation of imperial, royal, or
sovereign Sovereign is a title which can be applied to the highest leader in various categories. The word is borrowed from Old French ''souverain'', which is ultimately derived from the Latin word ''superānus'', meaning "above". The roles of a sovereign va ...
status. Some are shared with divinities, either to symbolize a god(ess)'s role as, say, king of the Pantheon (gods), Pantheon (e.g. Brahman's scepter) or to allow mortal royalty to resemble, identify with, or link to, a divinity. The term 'crown jewels' is commonly used to refer to regalia items that are designed to lend luster to occasions such as coronations. They feature some combination of precious materials, artistic merit, and symbolic or historical value. Crown jewels may have been designated at the start of a dynasty, accumulated through many years of tradition, or sent as tangible recognition of legitimacy by some leader such as the pope to an
emperor An emperor (from la, imperator, via fro, empereor) is a monarch, and usually the sovereignty, sovereign ruler of an empire or another type of imperial realm. Empress, the female equivalent, may indicate an emperor's wife (empress consort), m ...

or caliph. Each culture, even each monarchy and dynasty within one culture, may have its own historical traditions, and some even have a specific name for its regalia, or at least for an important subset, such as: * The Honours of Scotland * The Nigerian Royal Regalia * The Three Sacred Treasures of the Emperor of Japan * The Imperial Regalia of the emperors and kings of the Holy Roman Empire But some elements occur in many traditions.

Other regal dress and jewelry

* Armillae, Armills—bracelets * (Ermine) coronation mantle (royal garment), mantle * Gloves * Barmi (Бармы) or barmas, a detachable silk collar with medallions of precious material sewn to it, as used in Moscovy * Ring (finger), Rings, symbolizing the monarch's "marriage" to the state (in the case of the Doge of the Republic of Venice, to its lifeblood, the sea); or as a Seal (device), signet-ring, a practical attribute of his power to command legally 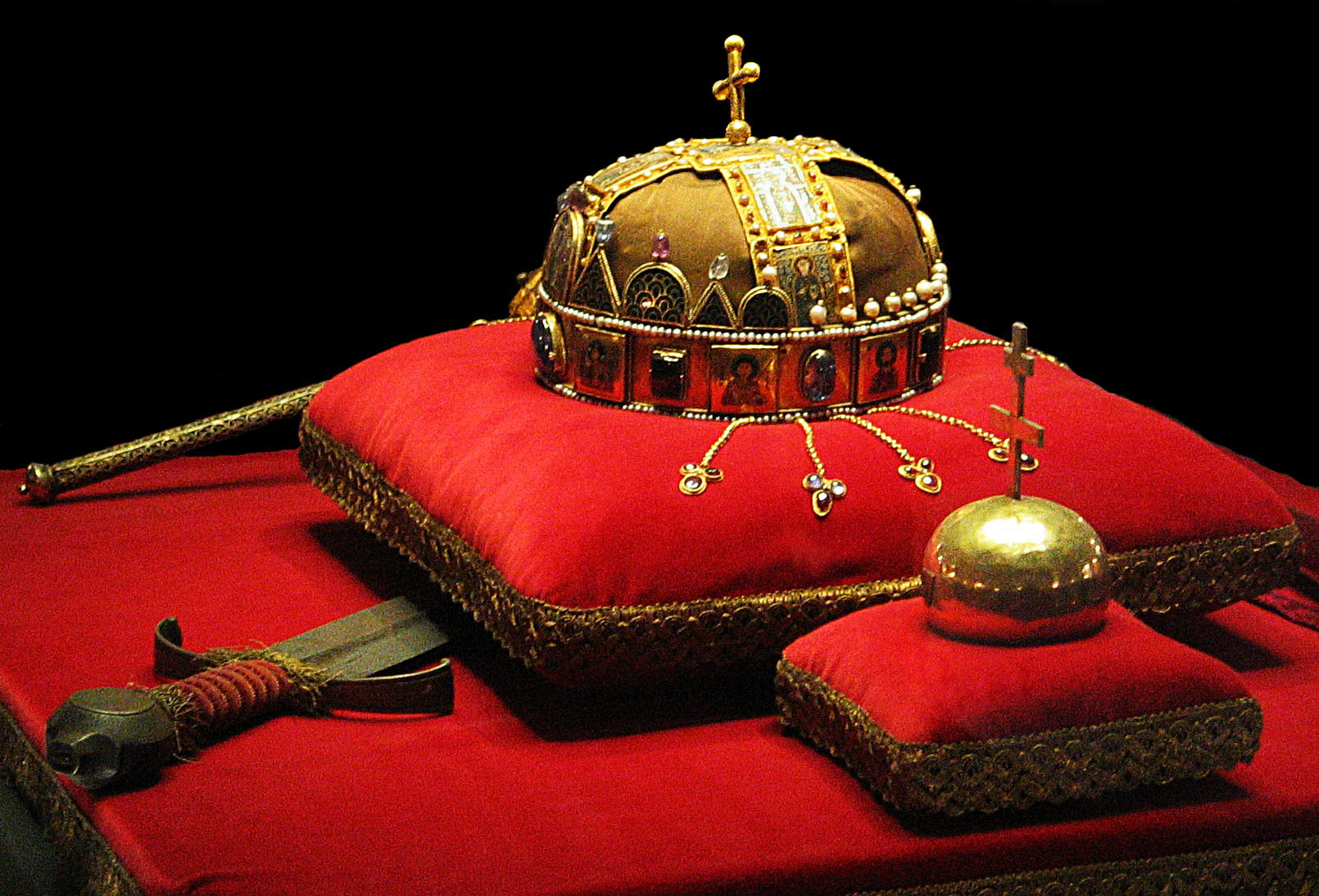 * Globus cruciger, Orb (globus cruciger) * Scepter, including the French Hand of Justice * Ceremonial mace, Mace * Sword - for examples, see Coronation of the British monarch, Sword of Justice; Sword of State; Sword of Mercy (known also as Edward the Confessor's Sword) * Other weapons, such as a dagger (as in Arabian and Indian traditions), a spear, or a royal kris (in Malay traditions) * Crook and flail * Fly-whisk; In Japan, it is said to have some of the power of Amaterasu. * Seal (Chinese), Seals, such as the Heirloom Seal of the Realm, represented imperial authority under the Mandate of Heaven in China.

Regalia can also stand for other attributes or virtues, i.e. what is expected from the holder. Thus the Imperial Regalia of Japan ( ja, 三種の神器, Sanshu no Jingi, or "Three Sacred Treasures"), also known as the Three Sacred Treasures of Japan as follows: * The sword, Kusanagi (草薙剣) (or possibly a replica of the original; located at Atsuta Shrine in Nagoya) represents Courage, valor * The jewel or necklace of jewels, Yasakani no magatama (八尺瓊曲玉; at Kokyo in Tokyo), represents wikt:benevolence, benevolence * The mirror, Yata no kagami (八咫鏡), located in the Ise Shrine in Mie Prefecture, represents wisdom Since 690, the presentation of these items to the
emperor An emperor (from la, imperator, via fro, empereor) is a monarch, and usually the sovereignty, sovereign ruler of an empire or another type of imperial realm. Empress, the female equivalent, may indicate an emperor's wife (empress consort), m ...

by the priests at the shrine are a central part of the imperial enthronement ceremony. As this ceremony is not public, the regalia are by tradition only seen by the emperor and certain priests, and no known photographs or drawings exist.

Some regalia objects are presented and/or used in the formal ceremony of enthronement/coronation. They can be associated with an office or court sinecure (cfr. archoffices) that enjoys the privilege to carry, present and/or use it at the august occasion, and sometimes on other formal occasions, such as a royal funeral. Such objects, with or without intrinsic
symbol A symbol is a mark, sign, or word that indicates, signifies, or is understood as representing an idea, Object (philosophy), object, or wikt:relationship, relationship. Symbols allow people to go beyond what is known or seen by creating linkages ...
ism, can include * Anointing utensils: **Sacred ampulla containing the ointment. **Spoon for the same ointment. **Alternatively, the monarchies of Norwegian Monarchy, Norway and Monarchy of Sweden, Sweden have an anointment horn. * A Bible used for swearing in the monarch as the new sovereign. * Cage with a bird (wren) for Wren Day, wren hunting in Celtic ceremonies. * Coronation stone e.g. Stone of Scone or Lia Fáil.

Apart from the sovereign himself, attributes (especially a crown) can be used for close relatives who are allowed to share in the pomp. For example, in Norway, the queen consort and the crown prince are the only other members of the royal family to possess these attributes and share in the sovereign's royal symbolism.

In the Roman Empire, the color Tyrian purple, produced with an extremely expensive Mediterranean Haustellum brandaris, mollusk extract, was in principle reserved for the court (royal), imperial court. The use of this dye was extended to various dignitaries, such as members of the Roman senate, who wore stripes of Tyrian purple on their white togas, for whom the term purpuratus was coined as a high aulic distinction. In late imperial China, the color yellow was reserved for the emperor, as it had a multitude of meanings. Yellow was a symbol of gold, and thus wealth and power, and since it was also the color that symbolized the center in Chinese cosmology (the five elements, or ''wu xing(五行)''), it was the perfect way to refer to the emperor, who was always in the center of the universe. Consequently, peasants and noblemen alike were forbidden to wear robes made entirely out of yellow, although they were allowed to use the color sparingly.

* Umbrella / Baldachin, canopy * Fan (implement), Fan(s) * Flag, Standard(s) * Ceremonial mace, Mace(s) * Music, such as ** A fanfare or other specific piece of music ** Reserved instruments, such as silver trumpets, or in India (especially Mewar) the Nakkara drum ** The ceremonial Royal Regalia of Malaysia, Nobat orchestra is a formal requirement for a valid Malaysian coronation.

In republics, the presidential sash, common especially in Latin American countries but also elsewhere in the world, have a similar role as royal regalia, marking the leader of the country.

Academic dress is a traditional form of clothing for academic settings, primarily tertiary (and sometimes secondary) education, worn mainly by those who have been admitted to a university degree (or similar), or hold a status that entitles them to assume them (e.g., undergraduate students at certain old universities). It is also known as academicals and, in the United States, as academic regalia.

Another example of non-royal regalia is the traditional dress that is worn by First Nation/Native American peoples in the United States, and Canada for ceremonial purposes, such as Pow Wow dancing.