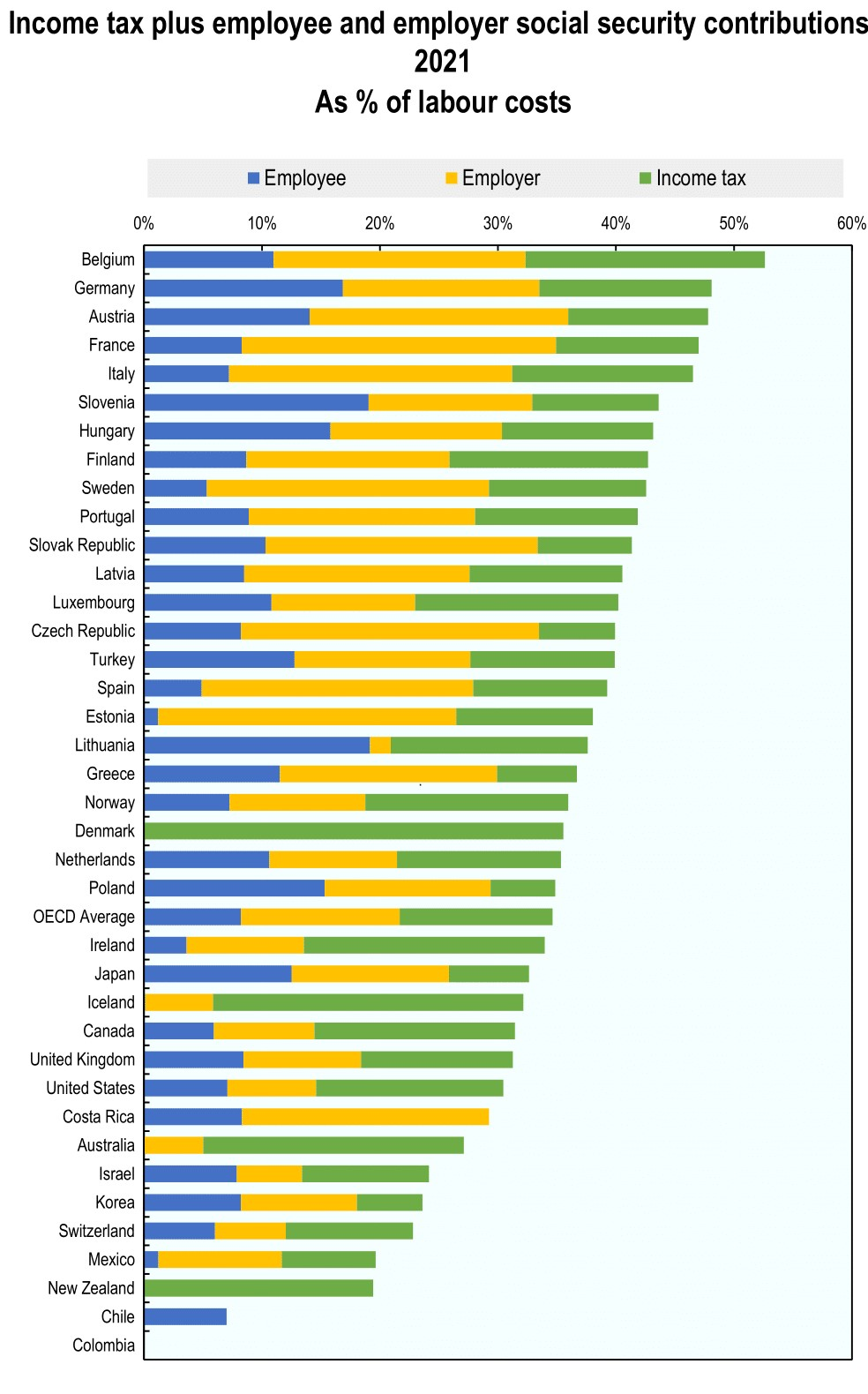 Payroll taxes are taxes imposed on employers or employees, and are usually calculated as a percentage of the salaries that employers pay their staff. Payroll taxes generally fall into two categories: deductions from an employee's wages, and taxes paid by the employer based on the employee's wages. The first kind are taxes that employers are required to withhold from employees' wages, also known as withholding tax, pay-as-you-earn tax (PAYE), or pay-as-you-go tax (PAYG) and often covering advance payment of income tax, social security contributions, and various insurances (e.g., unemployment and disability). The second kind is a tax that is paid from the employer's own funds and that is directly related to employing a worker. These can consist of fixed charges or be proportionally linked to an employee's pay. The charges paid by the employer usually cover the employer's funding of the social security system, Medicare, and other insurance programs. It is sometimes claimed that the economic burden of the payroll tax falls almost entirely on the worker, regardless of whether the tax is remitted by the employer or the employee, as the employers’ share of payroll taxes is passed on to employees in the form of lower wages that would otherwise be paid. Because payroll taxes fall exclusively on wages and not on returns to financial or physical investments, payroll taxes may contribute to underinvestment in human capital such as higher education.

In Bermuda, payroll tax accounts for over a third of the annual national budget, making it the primary source of government revenue. The tax is paid by employers based on the total remuneration (salary and benefits) paid to all employees, at a standard rate of 14% (though, under certain circumstances, can be as low as 4.75%). Employers are allowed to deduct a small percentage of an employee's pay (around 4%). Another tax, social insurance, is withheld by the employer.

The Northwest Territories in Canada applies a payroll tax of 2% to all employees. It is an example of the second type of payroll tax, but unlike in other jurisdictions it is paid directly by employees rather than employers. Unlike the first type of payroll tax as it is applied in Canada, though, there is no basic personal exemption below which employees are not required to pay the tax. Ontario applies a health premium tax to all payrolls on a sliding scale up to $900 per year.

In China, the payroll tax is a specific tax which is paid to provinces and territories by employers, not by employees. The tax is deducted from the worker's pay. The Chinese Government itself requires only one tax to be withheld from paychecks: the PAYG (or pay-as-you-go) tax, which includes medicare levies and insurances. Tax calculations and contributions are differ from city to city in China, and each city's data will be updated yearly. Taxable Income = Gross Salary – Social Benefits – ¥3,500 IIT = Taxable Income x Tax Rate – Quick Deduction Net Salary = Gross Salary – Social Benefits – IIT

In Croatia, the payroll tax is composed of several items: * national income tax on personal income ( hr|porez na dohodak), which is applied incrementally with rates of 0% (personal exemption = 3800 HRK), 24% (3800-30000 HRK) and 36% (30000 HRK - ) * optional local surcharge on personal income ( hr|prirez), which is applied by some cities and municipalities on the amount of national tax, currently up to 18% (in Zagreb) * pension insurance ( hr|mirovinsko osiguranje), universal 20%, for some people divided into two different funds, one of which is government-managed (15%) and the other is a personal pension fund (5%) * health insurance ( hr|zdravstveno osiguranje), universal 16.5% * health insurance exemption exists for the population below 30 years of age as part of government policy to encourage youth employment.

In France statutory payroll tax only covers employee and employer contributions to the social security system. Income tax deductions from the payroll are voluntary and may be requested by the employee, otherwise employees are billed 2 mandatory income tax prepayments during the year directly by the tax authority (set at 1/3 of the prior year's final tax bill). Employee payroll tax is made up of assigned taxes for the three branches of social security system and includes both basic and supplementary coverage. Different percentages apply depending on thresholds that are multiples of the social security earnings ceiling (in 2012 = 36,372 euro per year). Contributions for salaries between the minimum wage and 1.6 times the minimum wage are eligible to relief (known as Fillon relief) of up to 28 percentage points of employer contributions, effectively halving employer non-wage costs.

In Hong Kong, salaries tax is capped at 15%. Depending on income, employers fall into different tax brackets.

In 2018, the Swedish social security contribution paid by the employer is 31.42 percent, calculated on top of the employee's salary. The percentage is lower for old employees. The other type of Swedish payroll tax is the income tax withheld (PAYE), which consists of municipal, county, and, for higher income brackets, state tax. In most municipalities, the income tax comes to approximately 32 percent, with the two higher income brackets also paying a state tax of 20 or 25 percent respectively. The combination of the two types is a total marginal tax effect of 52 to 60 percent. According to a 2019 study in the ''American Economic Review'', a large employee payroll tax cut for young workers did not lead to increases in wages for young workers, but it did lead to an increase in employment, capital, sales, and profits of firms with many young workers.

In the United Kingdom, pay as you earn (PAYE) income tax and Employees' National Insurance contributions are examples of the first kind of payroll tax, while Employers' National Insurance contributions are an example of the second kind of payroll tax. There are currently (July 2011) four PAYE income tax bands: 23% plus 11% national insurance on annual income up to £35,000, 40% from £35,001 to £150,000 and 45% on all income above £150,000. The fourth rate of 10% is paid on income from savings up to £2,560 per annum only and is not paid if non-savings income is in excess of this limit. In addition employees pay a national insurance contribution of 12%, while employers pay 13.8%. The contributions are not paid on the total salary but only above a lower threshold. 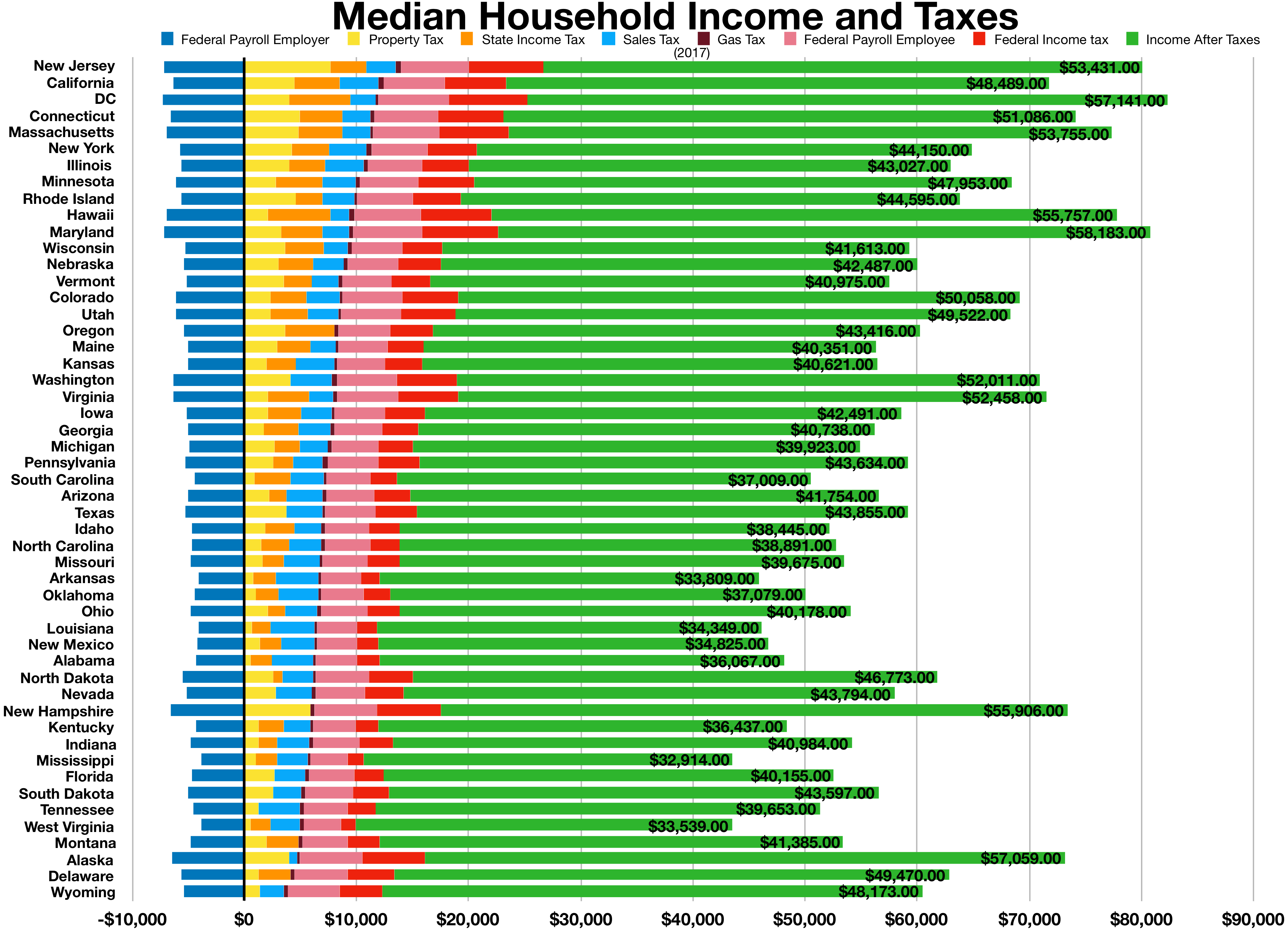 In the United States, payroll taxes are assessed by the federal government, some of the fifty states (Alaska, Florida, Nevada, South Dakota, Texas, Washington, and Wyoming do not have state income tax; New Hampshire and Tennessee only tax income from interest and dividends), Washington, D.C., and numerous cities. These taxes are imposed on employers and employees and on various compensation bases and are collected and paid to the taxing jurisdiction by the employers. Most jurisdictions imposing payroll taxes require reporting quarterly and annually in most cases, and electronic reporting is generally required for all but small employers. The Federal Insurance Contributions Act tax is a federal payroll tax imposed on both employees and employers to fund Social Security and Medicare —federal programs that provide benefits for retirees, the disabled, and children of deceased workers.

Federal, state, and local withholding taxes are required in those jurisdictions imposing an income tax. Employers having contact with the jurisdiction must withhold the tax from wages paid to their employees in those jurisdictions. Computation of the amount of tax to withhold is performed by the employer based on representations by the employee regarding his/her tax status on IRS Form W-4. Amounts of income tax so withheld must be paid to the taxing jurisdiction, and are available as refundable tax credits to the employees. Income taxes withheld from payroll are not final taxes, merely prepayments. Employees must still file income tax returns and self assess tax, claiming amounts withheld as payments.

Federal social insurance taxes are imposed on employers and employees, ordinarily consisting of a tax of 12.4% of wages up to an annual wage maximum ($118,500 in wages, for a maximum contribution of $14,694 in 2016) for Social Security and a tax of 2.9% (half imposed on employer and half withheld from the employee's pay) of all wages for Medicare. The Social Security tax is divided into 6.2% that is visible to employees (the "employee contribution") and 6.2% that is visible only to employers (the "employer's contribution"). For the years 2011 and 2012, the employee's contribution had been temporarily reduced to 4.2%, while the employer's portion remained at 6.2%, but Congress allowed the rate to return to 6.2% for the individual in 2013. To the extent an employee's portion of the 6.2% tax exceeded the maximum by reason of multiple employers, the employee is entitled to a refundable tax credit upon filing an income tax return for the year.

Employers are subject to unemployment taxes by the federal and all state governments. The tax is a percentage of taxable wages with a cap. The tax rate and cap vary by jurisdiction and by employer's industry and experience rating. For 2009, the typical maximum tax per employee was under $1,000. Some states also impose unemployment, disability insurance, or similar taxes on employees.

Employers must report payroll taxes to the appropriate taxing jurisdiction in the manner each jurisdiction provides. Quarterly reporting of aggregate income tax withholding and Social Security taxes is required in most jurisdictions. Employers must file reports of aggregate unemployment tax quarterly and annually with each applicable state, and annually at the Federal level. Each employer is required to provide each employee an annual report on IRS Form W-2 of wages paid and Federal, state and local taxes withheld. A copy must be sent to the IRS, and some state governments also require a copy. These are due by January 31 and February 28 (March 31 if filed electronically), respectively, following the calendar year in which wages are paid. The Form W-2 constitutes proof of payment of tax for the employee. Employers are required to pay payroll taxes to the taxing jurisdiction under varying rules, in many cases within one banking day. Payment of Federal and many state payroll taxes is required to be made by electronic funds transfer if certain dollar thresholds are met, or by deposit with a bank for the benefit of the taxing jurisdiction.

Failure to timely and properly pay federal payroll taxes results in an automatic penalty of 2% to 10%. Similar state and local penalties apply. Failure to properly file monthly or quarterly returns may result in additional penalties. Failure to file Forms W-2 results in an automatic penalty of up to $50 per form not timely filed. State and local penalties vary by jurisdiction. A particularly severe penalty applies where federal income tax withholding and Social Security taxes are not paid to the IRS. The penalty of up to 100% of the amount not paid can be assessed against the employer entity as well as any person (such as a corporate officer) having control or custody of the funds from which payment should have been made.