The nephron is the microscopic structural and functional unit of the kidney. It is composed of a renal corpuscle and a renal tubule. The renal corpuscle consists of a tuft of capillaries called a glomerulus and an encompassing Bowman's capsule. The renal tubule extends from the capsule. The capsule and tubule are connected and are composed of epithelial cells with a lumen. A healthy adult has 1 to 1.5 million nephrons in each kidney. Blood is filtered as it passes through three layers: the endothelial cells of the capillary wall, its basement membrane, and between the foot processes of the podocytes of the lining of the capsule. The tubule has adjacent peritubular capillaries that run between the descending and ascending portions of the tubule. As the fluid from the capsule flows down into the tubule, it is processed by the epithelial cells lining the tubule: water is reabsorbed and substances are exchanged (some are added, others are removed); first with the interstitial fluid outside the tubules, and then into the plasma in the adjacent peritubular capillaries through the endothelial cells lining that capillary. This process regulates the volume of body fluid as well as levels of many body substances. At the end of the tubule, the remaining fluid—urine—exits: it is composed of water, metabolic waste, and toxins. The interior of Bowman's capsule, called Bowman's space, collects the filtrate from the filtering capillaries of the glomerular tuft, which also contains mesangial cells supporting these capillaries. These components function as the filtration unit and make up the renal corpuscle. The filtering structure (glomerular filtration barrier) has three layers composed of endothelial cells, a basement membrane, and podocytes (foot processes). The tubule has five anatomically and functionally different parts: the proximal tubule, which has a convoluted section the proximal convoluted tubule followed by a straight section (proximal straight tubule); the loop of Henle, which has two parts, the descending loop of Henle ("descending loop") and the ascending loop of Henle ("ascending loop"); the distal convoluted tubule ("distal loop"); the connecting tubule, and the last part of nephron the collecting ducts. Nephrons have two lengths with different urine concentrating capacities: long juxtamedullary nephrons and short cortical nephrons. The four mechanisms used to create and process the filtrate (the result of which is to convert blood to urine) are filtration, reabsorption, secretion and excretion. Filtration occurs in the glomerulus and is largely passive: it is dependent on the intracapillary blood pressure. About one-fifth of the plasma is filtered as the blood passes through the glomerular capillaries; four-fifths continues into the peritubular capillaries. Normally the only components of the blood that are not filtered into Bowman's capsule are blood proteins, red blood cells, white blood cells and platelets. Over 150 liters of fluid enter the glomeruli of an adult every day: 99% of the water in that filtrate is reabsorbed. Reabsorption occurs in the renal tubules and is either passive, due to diffusion, or active, due to pumping against a concentration gradient. Secretion also occurs in the tubules and is active. Substances reabsorbed include: water, sodium chloride, glucose, amino acids, lactate, magnesium, calcium phosphate, uric acid, and bicarbonate. Substances secreted include urea, creatinine, potassium, hydrogen, and uric acid. Some of the hormones which signal the tubules to alter the reabsorption or secretion rate, and thereby maintain homeostasis, include (along with the substance affected) antidiuretic hormone (water), aldosterone (sodium, potassium), parathyroid hormone (calcium, phosphate), atrial natriuretic peptide (sodium) and brain natriuretic peptide (sodium). A countercurrent system in the renal medulla provides the mechanism for generating a hypertonic interstitium, which allows the recovery of solute-free water from within the nephron and returning it to the venous vasculature when appropriate. Some diseases of the nephron predominantly affect either the glomeruli or the tubules. Glomerular diseases include diabetic nephropathy, glomerulonephritis and IgA nephropathy; renal tubular diseases include acute tubular necrosis and polycystic kidney disease. 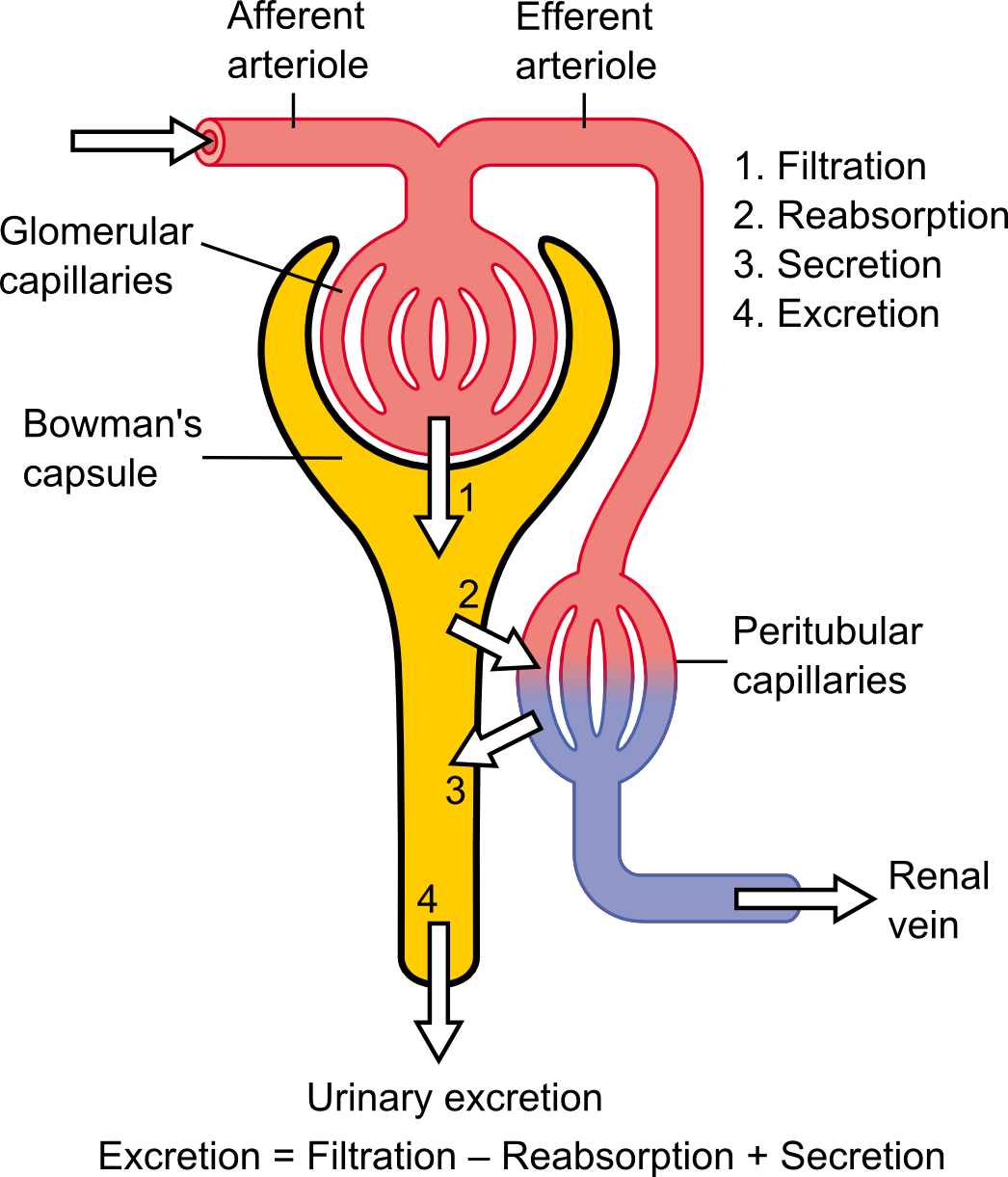 The nephron is the functional unit of the kidney. This means that each separate nephron is where the main work of the kidney is performed. A nephron is made of two parts: * a renal corpuscle, which is the initial filtering component, and * a renal tubule that processes and carries away the filtered fluid.

The glomerulus is the network known as a ''tuft'', of filtering capillaries located at the vascular pole of the renal corpuscle in Bowman's capsule. Each glomerulus receives its blood supply from an afferent arteriole of the renal circulation. The glomerular blood pressure provides the driving force for water and solutes to be filtered out of the blood plasma, and into the interior of Bowman's capsule, called Bowman's space. Only about a fifth of the plasma is filtered in the glomerulus. The rest passes into an efferent arteriole. The diameter of the efferent arteriole is smaller than that of the afferent, and this difference increases the hydrostatic pressure in the glomerulus.

The Bowman's capsule, also called the glomerular capsule, surrounds the glomerulus. It is composed of a visceral inner layer formed by specialized cells called podocytes, and a parietal outer layer composed of simple squamous epithelium. Fluids from blood in the glomerulus are ultrafiltered through several layers, resulting in what is known as the filtrate. The filtrate next moves to the renal tubule, where it is further processed to form urine. The different stages of this fluid are collectively known as the tubular fluid.

The nephron uses four mechanisms to convert blood into urine: filtration, reabsorption, secretion, and excretion. These apply to numerous substances. The structure and function of the epithelial cells lining the lumen change during the course of the nephron, and have segments named by their location and which reflects their different functions.

The proximal tubule as a part of the nephron can be divided into an initial convoluted portion and a following straight (descending) portion. Fluid in the filtrate entering the proximal convoluted tubule is reabsorbed into the peritubular capillaries, including more than half of the filtered salt and water and all filtered organic solutes (primarily glucose and amino acids).

This is the final segment of the tubule before it enters the collecting duct system. 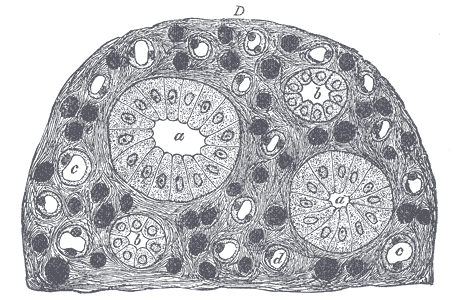 Each distal convoluted tubule delivers its filtrate to a system of collecting ducts, the first segment of which is the connecting tubule. The collecting duct system begins in the renal cortex and extends deep into the medulla. As the urine travels down the collecting duct system, it passes by the medullary interstitium which has a high sodium concentration as a result of the loop of Henle's countercurrent multiplier system. Because it has a different origin during the development of the urinary and reproductive organs than the rest of the nephron, the collecting duct is sometimes not considered a part of the nephron. Instead of originating from the metanephrogenic blastema, the collecting duct originates from the ureteric bud. Though the collecting duct is normally impermeable to water, it becomes permeable in the presence of antidiuretic hormone (ADH). ADH affects the function of aquaporins, resulting in the reabsorption of water molecules as it passes through the collecting duct. Aquaporins are membrane proteins that selectively conduct water molecules while preventing the passage of ions and other solutes. As much as three-quarters of the water from urine can be reabsorbed as it leaves the collecting duct by osmosis. Thus the levels of ADH determine whether urine will be concentrated or diluted. An increase in ADH is an indication of dehydration, while water sufficiency results in a decrease in ADH allowing for diluted urine. [[Image:Kidney Nephron Cells.png|250px|Fig.7) Cross-sectional diagram of the juxtaglomerular apparatus and adjacent structures: 1) top, yellow - distal convoluted tubule; 2) top, brown -macula densa cuboidal cells surrounding arterioles; 3) small blue cells - juxtaglomerular cells; 4) large blue cells - mesangial cells; 5) tan - podocytes lining [[Bowman's capsule adjacent to capillaries, and parietal layer of capsule, 6)center - five glomerular capillaries, and the 6)bottom, purple - exiting tubule. Structures (2), (3), and (4) constitute the juxtaglomerular apparatus. Lower portions of the collecting organ are also permeable to urea, allowing some of it to enter the medulla, thus maintaining its high concentration (which is very important for the nephron). Urine leaves the medullary collecting ducts through the renal papillae, emptying into the renal calyces, the renal pelvis, and finally into the urinary bladder via the ureter.

The juxtaglomerular apparatus (JGA) is a specialized region associated with the nephron, but separate from it. It produces and secretes into the circulation the enzyme renin (angiotensinogenase), which cleaves angiotensinogen and results in the ten amino acid substance angiotensin-1 (A-1). A-1 is then converted to angiotensin-2, a potent vasoconstrictor, by removing two amino acids: this is accomplished by angiotensin converting enzyme (ACE). This sequence of events is referred to as the renin–angiotensin system (RAS) or renin-angiotensin-aldosterone system (RAAS). The JGA is located between the thick ascending limb and the afferent arteriole. It contains three components: the macula densa, juxtaglomerular cells, and extraglomerular mesangial cells.