A parachutist badge (or parachutist brevet) is a military badge awarded by the armed forces of many states to soldiers who receive the proper parachute training and accomplish the required number of jumps. It is difficult to assess which country was the first to introduce such an award.

The Military Parachute Trainee Badge (French: ''Brevet de préparation militaire parachutiste (PMP)'') is a badge created in 1965 and aimed at reservists and national service personnel. The laureates of the badge could serve in airborne units and eventually train at the Airborne School for the Military Parachute Badge in a short course. Since the end of conscription in France, the PMP Badge is awarded to prospective soldiers in airborne units after a 4-week course.

The Military Parachuting Initiation Badge (French: ''Brevet d'initiation au parachutisme militaire (BIPM)'') was created in 1980 and aimed at military personnel outside of airborne units. It was awarded for four daytime jumps. The BIMP course was closed in 1994 for French personnel, but the badge is still awarded to members of foreign militaries after a short course at the Airborne School. 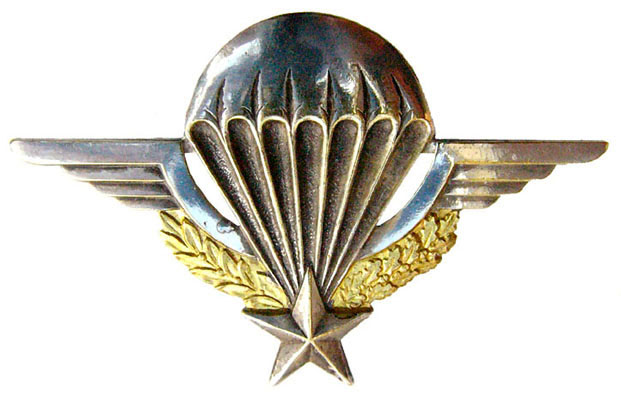 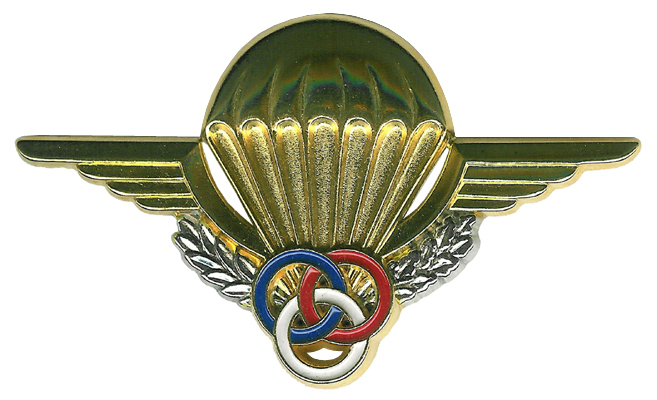 The Parachutist Monitor Badge (French: ''Brevet de moniteur parachutiste'') is awarded to long-serving NCO in airborne units. Its graduates can teach the basics of parachute jumping to trainees, act as technical advisors on parachute matters and be jumpmasters both in units or at the Airborne Schools. 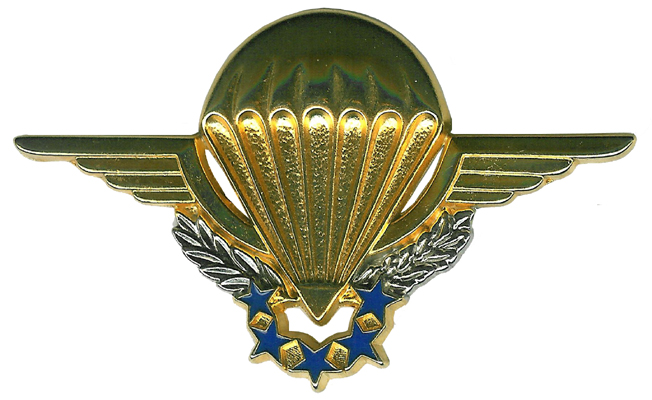 The Operational Free Fall Badge (French: ''Brevet de chuteur opérationnel'') is awarded to graduates of long courses in Military Free Fall techniques. All graduates must have at least finished the Military Parachute Course and have some years of experience in airborne units. The Operational Free Fall Badge is part of the pipeline training for special forces and for commando platoons within the Airborne units. 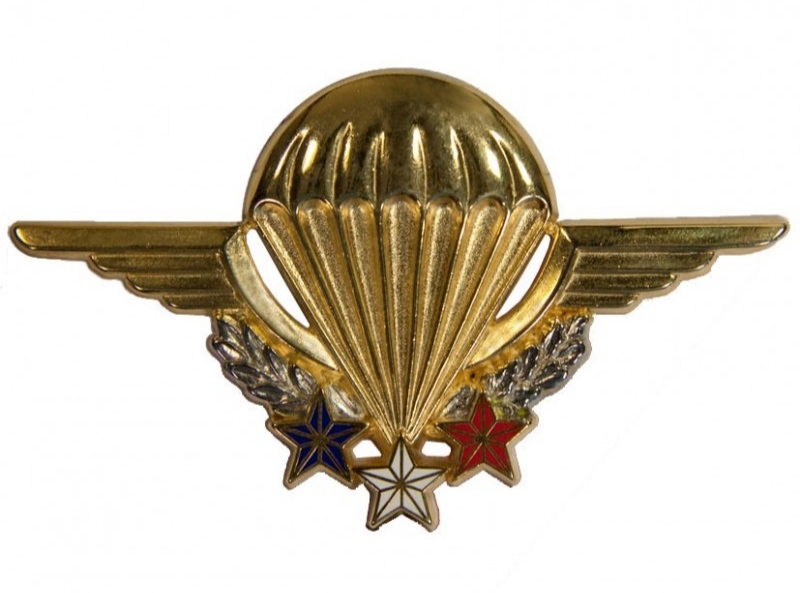 The Military Parachuting Initiation Badge is awarded to graduates of a short course at the (Army) Airborne School, where the only students are Air Force cadets. It is awarded after four daytime jumps. 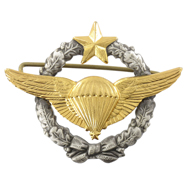 The Military Parachute Badge (Air Force) is awarded to Air Force personnel, already graduates of the (Army) Airborne School, serving in the Fusiliers Commandos de l'Air, the airborne infantry units of the Air Force. A minimum of 30 jumps is required for the award of the Air Force badge.

The Special Parachute Badge (French : ''Brevet de parachutiste spécialisé'') is the Free Fall badge of the Air Force. It is awarded after long courses at both the (Army) Airborne School and the Fusiliers Commandos Training Squadron.

*Parachutist Badge (Nazi Germany), a World War II-era decoration in the Wehrmacht and the Waffen-SS.

Members of the Army Air Assault Regiment 40 of the German Democratic Republic's National People's Army were awarded the parachutist badge upon completion of the paratrooper training course. 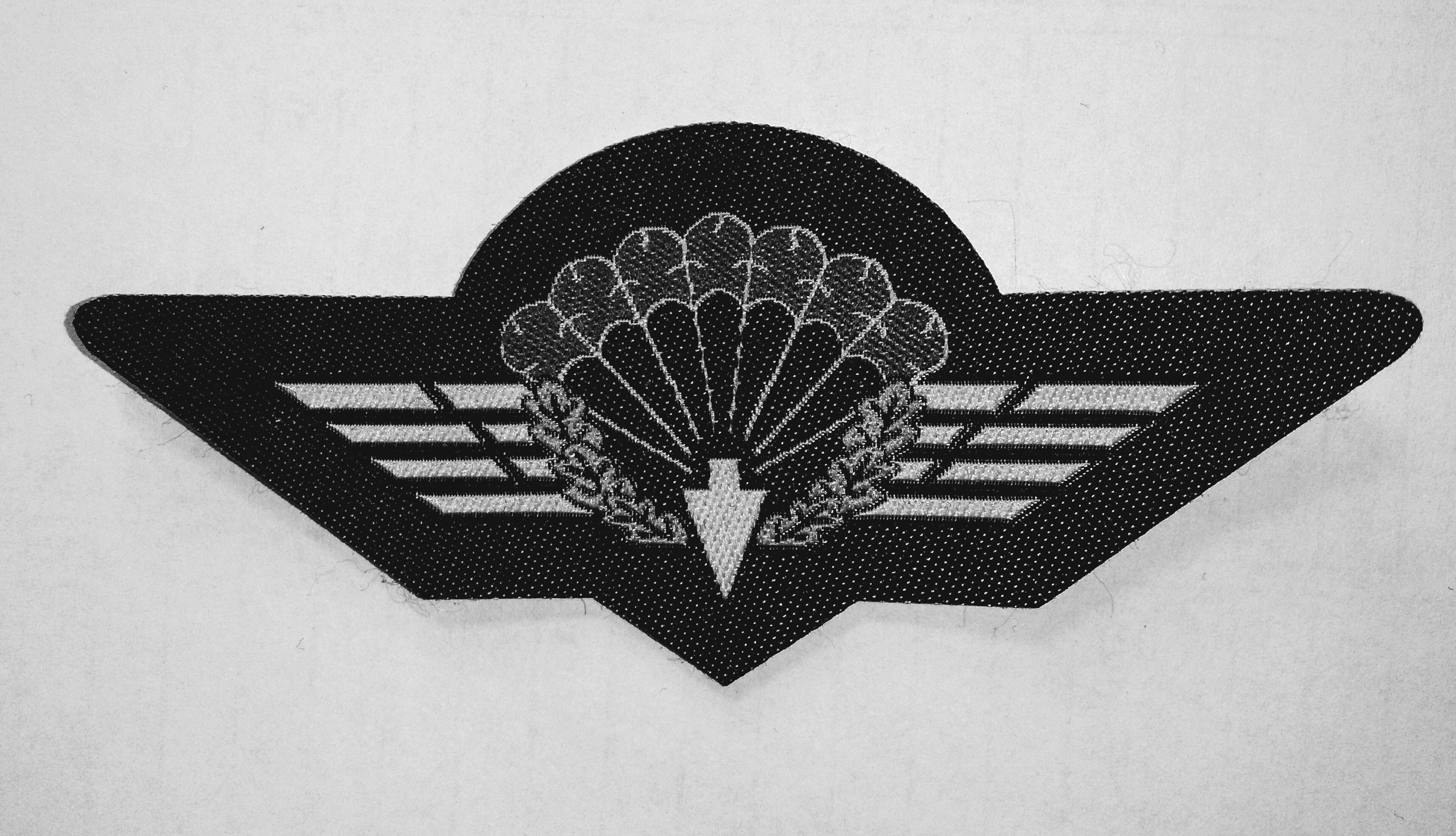 The AFP Parachutist Badge also known as the "Airborne Badge" is awarded by the Chief of Staff, AFP to AFP Personnel, Military Cadets, and Officer Candidates who have satisfactorily completed the requirements of the Basic Airborne Course set forth in the POI conducted by the Airborne School, Special Forces Regiment (Airborne).

upPolish "Odznaka Spadochronowa" The Polish ''Odznaka Spadochronowa'' was based on the previous award called the ''Odznaka Pilota Wojskowego'', or ''Military Pilot Badge''. It was first introduced by notable Polish sculptor Władysław Gruberski in 1919 and was accepted shortly afterwards as the sign of all the pilots of the Polish Air Forces. The badge featured an eagle with wide spread wings, holding a laurel wreath in his bill. In 1941, after the creation of the UK-trained 1st Independent Parachute Brigade, a similar symbol was adopted as the sign of all Polish paras. It featured a diving silver eagle. The symbol was also adopted by the cichociemni and nowadays is used by all branches of the Polish Army. Also, the Polish special unit GROM adopted a modified version of the symbol as its emblem. It is commonly (though informally) referred to as ''gapa'' (diving Eagle).

The Silver Wings is awarded upon successful completion of the Basic Airborne Course conducted by the Parachute Training Wing, School of Commandos. First awarded to the pioneering graduating batch of 27 NSFs from Second Company, 1st Commando Battalion (1 Cdo Bn) of the Singapore Commandos Formation, it comprises a pair of outspread wings on both wigs of a deployed parachute, with the words "SINGAPURA" below the canopy. With the design sanctioned by 1 Cdo Bn's Commanding Officer, Tan Kim Peng Clarence, it is differentiated by a crimson velvet backing for Commandos, while those of the Commando Parachute Jump Instructors have a golden velvet backing. Non-Commandos wear the badge without any backing.

The United States Parachutist Badge (also commonly referred to as "Jump Wings") is a military badge of the United States Armed Forces. After making five more jumps in a jump billet, members of the Navy and Marine Corps are authorized to wear the gold wings of Naval and Marine parachutists in lieu of their initial award of Basic Parachutist Badge. There are three versions of the Parachutist Badge. The United States Coast Guard is the only service which does not issue a Parachutist Badge and does not have personnel serving on jump status; however, Coast Guard members are entitled to receive the Parachutist Badge of another service if the proper training was received. The badge is awarded to U.S. Armed Forces personnel upon completion of the United States Army Airborne School Basic Airborne Course or freefall parachute training at the United States Air Force Academy. If awarded, Army parachutists who meet the qualifications and jump with a foreign service may also wear one set of foreign wings on their Class A uniform. According to AFI36-2903, page 139 (edition of 2 August 2006), Air Force personnel may wear foreign-awarded jump wings while stationed in the awarding country or attending an official or social function hosted by the awarding government, and if the recipient has already been awarded US jump wings. The original Parachutist Badge was designed in 1941 by Lieutenant General (then Captain) William P. Yarborough and approved by the Department of the Army in March of that year. In addition to the Parachutist Badge, U.S. Army paratroopers wore a "paraglider" patch on the front left side (enlisted) or right side (officers) of the garrison cap. Until the late 1940s, glider units were also included within Airborne divisions, hence the parachute and glider on the cap. The garrison cap with the paraglider patch was replaced by the maroon beret. Troops of the 101st Airborne Division (Air Assault), a former parachute unit, continued to wear the garrison cap with patch until the black beret was adopted Army-wide except for of organizations already wearing maroon (Airborne) or green (Special Forces) berets, and or switched from black to tan (Ranger). The U.S Navy and Marine Corps Parachutist badge was originally known as the U.S. Navy Certified Parachute Rigger badge and designed by American Insignia Company in 1942 for graduates of the U.S. Navy Parachute Rigger School. During WWII, despite being against uniform regulations it became common for U.S. Marine Corps paratroopers who were issued the silver U.S. Army Basic Parachutist badge to wear the gold Navy Certified Parachute Rigger badge because they believed the gold "Rigger wings" looked better on their uniform. This unauthorized wear of the Parachute Rigger badge became so common that in July 1963 the Commander of United States Marine Corps Force Reconnaissance Bruce F. Meyers sent a request to Chief of Naval Operations Admiral George W. Anderson Jr. via Marine Corps Commandant General David M. Shoup requesting to officially make the Navy Parachute Rigger badge the parachutist badge for the Navy and Marine Corps. The request was approved by Admiral Anderson on 12 July 1963 per BuPers Notice 1020. Since 1963, being a graduate of the U.S. Navy Parachute Rigger School is no longer a requirement to earn the badge.

* Argentina: In the Argentinian Army, personnel who complete the basic parachutist training receive a badge consisting of a silver winged parachute. A golden badge is awarded to personnel after fulfilling certain requirements, including a number of years spent in a parachute unit, a number of jumps and completion of at least two more parachute-related courses besides the basic one, such as rigger, jumpmaster, free-fall jump, etc. This system replaced the one existing until 1993 when, despite parachute experience, officers wore a golden badge, NCOs a silver one and privates a smaller silver one. Navy, Air Force and Gendarmerie parachutists were similar badges to those of the Army. * Czechoslovakia: Czechoslovak badges were awarded in three classes: :: 3rd Class :: 2nd Class :: 1st Class