A championship or title in
professional wrestling Professional wrestling is a type of athletic exhibition and entertainment involving wrestling matches whose progress and outcome are planned in advance, typically between performers with established character roles. The wrestling matches are base ...
is a recognition promoted by professional wrestling organizations. Championship reigns are determined by
professional wrestling matches Many types of wrestling matches, sometimes called "concept" or "gimmick matches" in the jargon of the business, are performed in professional wrestling. Some of them occur relatively frequently while others are developed so as to advance an angle an ...
, in which competitors are involved in predetermined rivalries. These narratives create
feud A feud , referred to in more extreme cases as a blood feud, vendetta, faida, clan war, gang war, or private war, is a long-running argument or fight, often between social groups of people, especially families or clans. Feuds begin because one party ...
s between the various competitors, which cast them as
villains A villain (also known as a "black hat" or "bad guy"; the feminine form is villainess) is a fictional character, whether based on a historical narrative or one of literary fiction. ''Random House Unabridged Dictionary'' defines such a character ...
and
heroes Heroes or Héroes may refer to: * Hero, one who displays courage and self-sacrifice for the greater good Film * ''Heroes'' (1977 film), an American drama * ''Heroes'' (2008 film), an Indian Hindi film Gaming * ''Heroes of Might and Magic'' or ' ...
. The bookers in a company will place the title on the most accomplished performer, or whom they believe will generate fan interest in terms of event attendance and television viewership.

Professional wrestling portrays the structure of title match
combat sport A combat sport, or fighting sport, is a competitive contact sport that usually involves one-on-one combat. In many combat sports, a contestant wins by scoring more points than the opponent or by disabling the opponent. Combat sports share a long pe ...
s. Participants compete for a championship, and must defend it after winning it. These titles are represented physically by a
championship belt A championship belt is a large, extravagantly designed belt used primarily in combat sports such as boxing, mixed martial arts, and professional wrestling to signify the champions of the promotion or company, much like a cup or trophy in other spo ...
that is worn or carried by the champion(s). In the case of team wrestling, there is a belt for each member of the team. Almost all professional wrestling promotions have one major title, and some have more. Championships are designated by divisions of weight, height, gender, wrestling style, and other qualifications. Typically, each promotion only recognizes the "legitimacy" of their own titles, although
cross-promotionCross-promotion is a form of marketing promotion where customers of one product or service are targeted with promotion of a related product. A typical example is cross-media marketing of a brand; for example, Oprah Winfrey's promotion on her televis ...
does happen. When one promotion absorbs or purchases another, the titles from the defunct promotion may continue to be defended in the new promotion or be decommissioned, usually through
championship unification Championship unification is the act of combining two or more separate professional wrestling championships into a single title. History In professional wrestling, championships may be unified to consolidate the number of championships in a given p ...
. 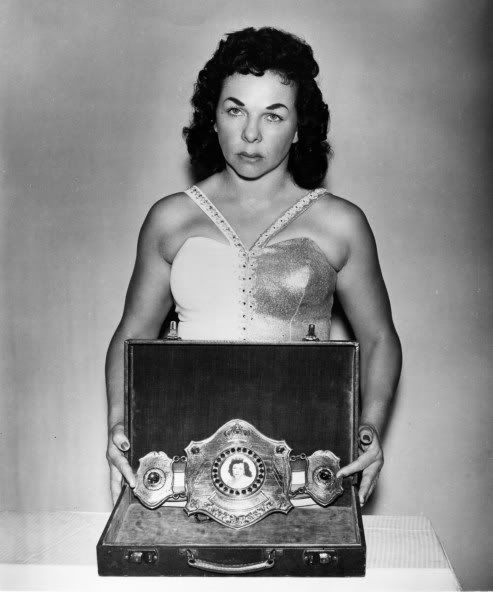 Behind the scenes In cinema, a making-of, also known as behind-the-scenes, the set or on the set is a documentary film that features the production of a film or television program. This is often referred to as the EPK (electronic press kit) video, due to its main ...
, the
bookers

in a company will place the title on the most accomplished performer, or those the bookers believe will generate
fan

interest in terms of event attendance and
television Television (TV), sometimes shortened to tele or telly, is a telecommunication medium used for transmitting moving images in monochrome (black and white), or in color, and in two or three dimensions and sound. The term can refer to a televisi ...

viewership. Lower ranked titles may also be used on the performers who show potential, thus allowing them greater exposure to the audience. However, other circumstances may also determine the use of a championship. A combination of a championship's lineage, the caliber of performers as champion, and the frequency and manner of title changes, dictates the audience's perception of the title's quality, significance, and reputation. A wrestler's championship accomplishments can be central to their career, becoming a measure of their performance ability and
drawing Drawing is a form of visual art in which an artist uses instruments to mark paper or other two-dimensional surface. Drawing instruments include graphite pencils, pen and ink, various kinds of paints, inked brushes, colored pencils, crayons, char ...
power. The most accomplished or decorated wrestlers tend to be revered as legends. American wrestler
Ric Flair Richard Morgan Fliehr (born February 25, 1949), better known as Ric Flair, is an American professional wrestling manager and retired professional wrestler. Regarded by multiple peers and journalists as the greatest professional wrestler of all ...

has had multiple world heavyweight championship reigns spanning over three decades. Japanese wrestler
Último Dragón (born December 12, 1966) is a Japanese professional wrestler and actor, better known as . In addition to having trained in Japan, Asai learned to wrestle in the lucha libre style while working in Mexico. He is credited with popularizing the "Asai ...
once J-Crown, held and defended a record 10 titles simultaneously.

Professional wrestling's championship belts are modeled similarly to the championship belts in boxing, and other
combat sport A combat sport, or fighting sport, is a competitive contact sport that usually involves one-on-one combat. In many combat sports, a contestant wins by scoring more points than the opponent or by disabling the opponent. Combat sports share a long pe ...
s such as mixed martial arts. They are made of elaborately designed plates of gold or other precious metals, usually bearing the name of the title and the wrestling promotion, and is on a leather strap. The color and designs vary with each title and promotion. A wrestler may win a sanctioned championship and redesign the belt itself. Some (such as John Cena's Spinner Belt) later became the official belt design. Others (such as Stone Cold Steve Austin's Smoking Skull Belt, Edge (wrestler), Edge's Rated-R Spinner, Daniel Bryan's eco-friendly belt), Bray Wyatt, The Fiend Bray Wyatt's Universal title with his face on it, were not used after their respective title reign. While rare, there are cases of championships being represented with items other than belts, such as championship trophies, medals, crowns etc such as WWE's NXT UK Heritage Cup Championship, which is represented with a trophy 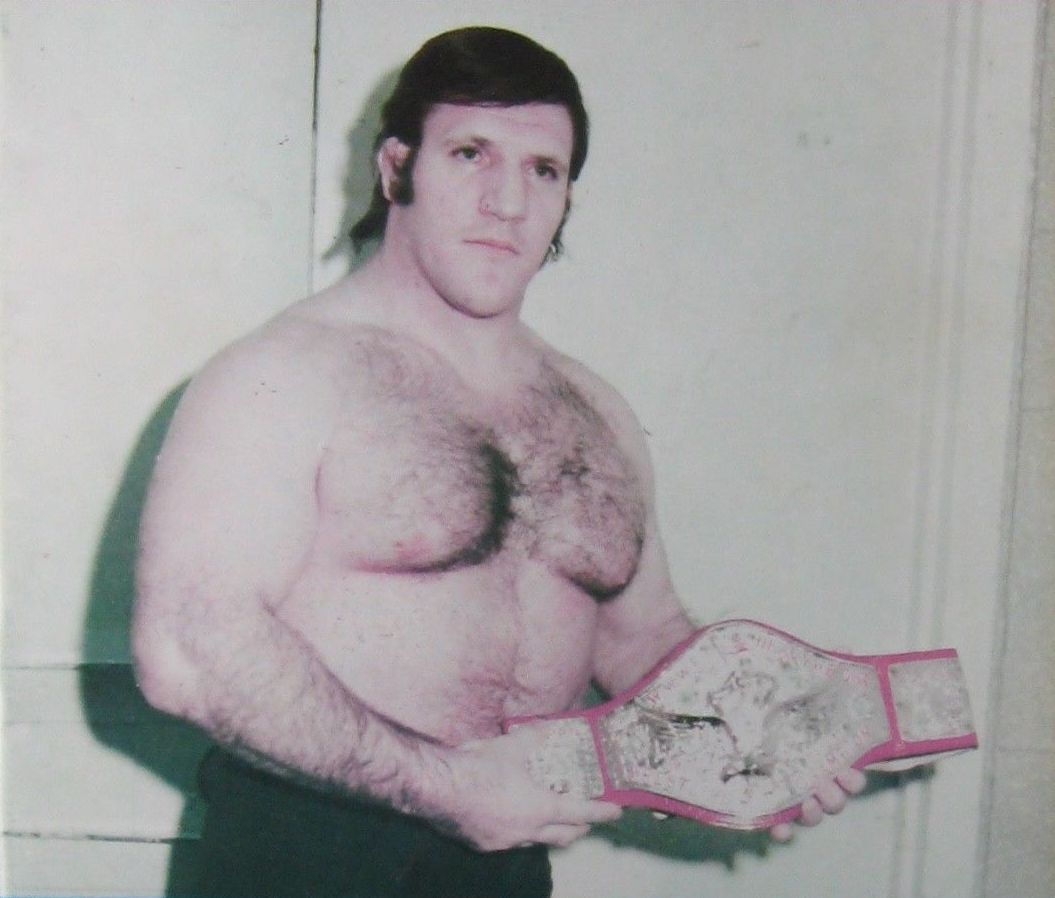 Professional wrestling championships are often split up into various different classifications, each of which designate varying levels of importance to the belts. 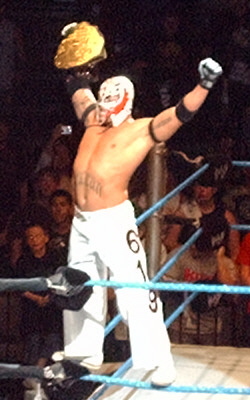 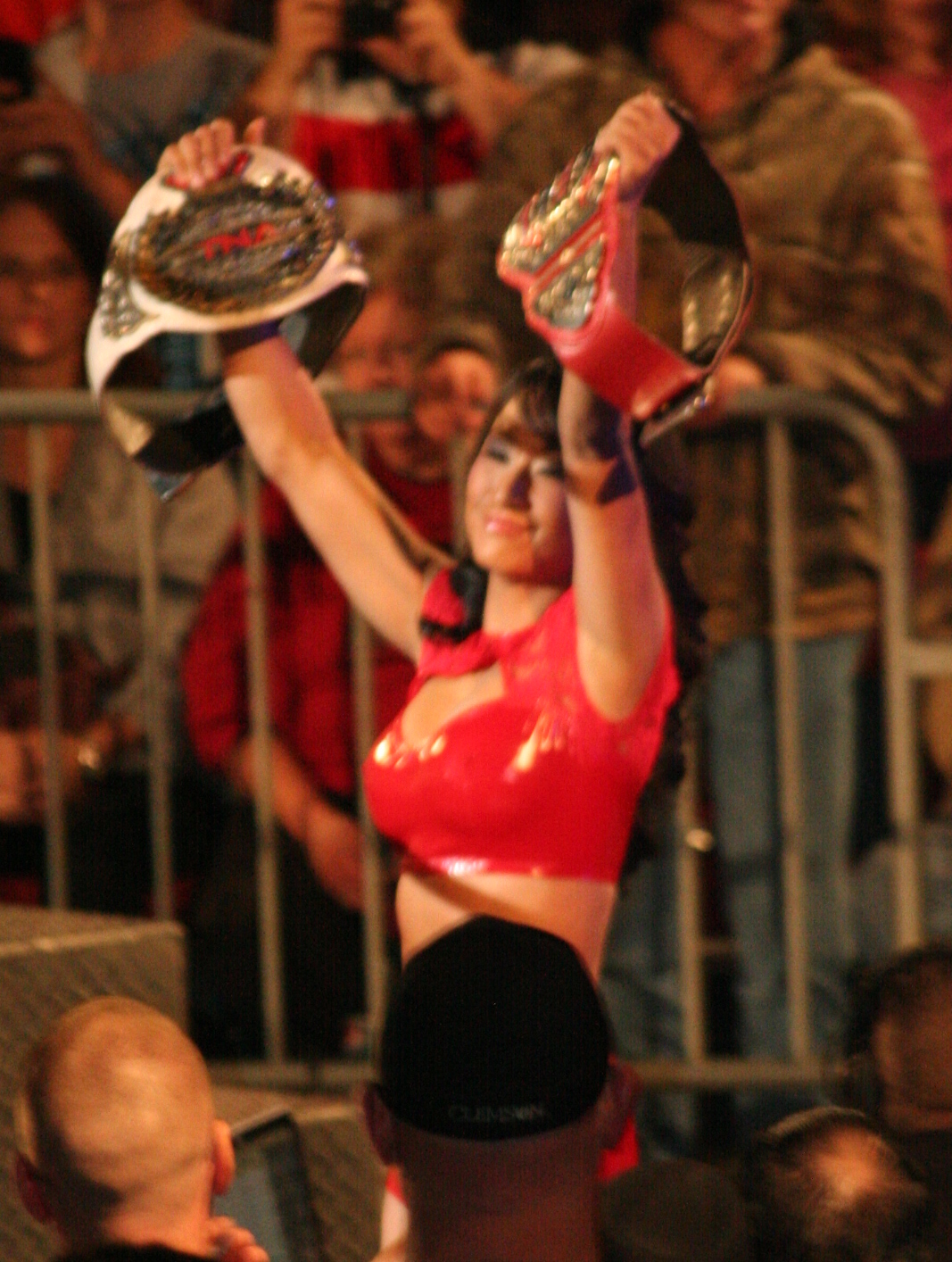 Gender occasionally plays a role in the classifications of championship belts. Due to professional wrestling being a male dominated sport, only women's titles are given official gender classifications. Generally, only men are allowed to win the championships without a gender specification, though Chyna defeating Jeff Jarrett to win the WWE Intercontinental Championship, WWF Intercontinental Championship in 1999 and Tessa Blanchard defeating Sami Callihan to win the Impact World Championship in 2020 are notable exceptions. In promotions featuring only a single gender (such as Women of Wrestling or Shimmer Women Athletes), gender classifications are often unnecessary as well. Titles specifically designated for women may fall into any of the other categories listed here (e.g. women's world titles or women's tag team titles). Andy Kaufman once used gender classifications to his advantage, turning inter-gender competitions into a unique wrestling side-show. Kaufman declared himself the "Inter-Gender Champion of the World", and offered $1,000 to any woman who could pin him. None were successful during the run of the gimmick; though in other promotions such as World Championship Wrestling, WCW and WWE, women have successfully pinned men, most notably in a few isolated championship matches. On rare occasions, a male wrestler will compete in championship matches for championships generally contested exclusively in the women's division. Such examples include Harvey Wippleman becoming the only male to capture the WWE Women's Championship (1956–2010), WWF Women's Championship in 2000, and Eric Young (wrestler), Eric Young winning one half of the TNA Knockouts Tag Team Championship in 2012. 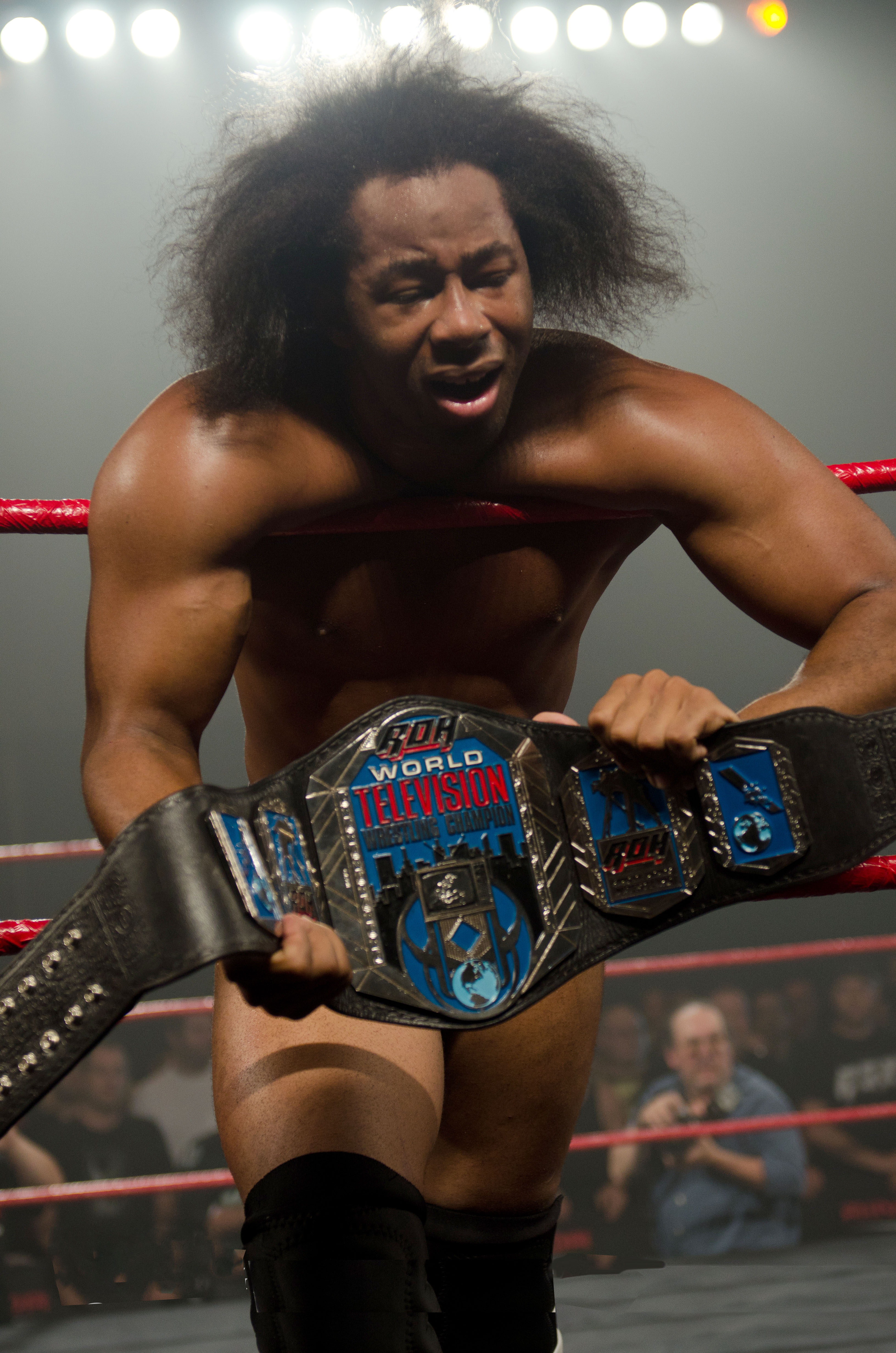 Gimmick (professional wrestling), Gimmick match classifications sometimes factor into the creation of title belts. In these classifications, special skills in a certain type of match or a certain style of wrestling is the signature of the division, and the champion is considered to be the most skilled wrestler at that specific style. Gimmick championships often take very differing forms. A common variation is the "hardcore championship", a title often defended in weapons-filled and bloody competitions with fewer rules (count outs and disqualifications are not usually allowed). An example of a hardcore championship is the WWE Hardcore Championship, which was active from 1998 to 2002. In 2019, the WWE introduced a new gimmick title called the WWE 24/7 Championship that is similar to their previous Hardcore Championship; its gimmick is that it can be defended anytime, anywhere, as long as a WWE referee is present (it is also open to anyone, regardless of gender or WWE employment status). This championship is used more in comedy segments than actual contested matches. In recent years, style-based championships have centered around what is known as "scientific" or technical wrestling. Examples of this include the NXT UK Heritage Cup (which is specifically contested under "British Round Rules") in WWE's NXT UK (WWE brand), NXT UK brand, and the ROH Pure Championship in Ring of Honor (which is contested under "Pure Wrestling Rules"). A variation that was prominent in the 1980s and 1990s and is somewhat making a return in the 2020s is a "television championship" or "iron man championship", which involves more frequent title defenses as well as the stipulations that the belt can only change hands on television (as opposed to non-televised house shows) with title matches having a short, TV-friendly time limit, usually 10 or 15 minutes. These titles were originally introduced during a time when weekly TV shows were seen as a vehicle to promote the money-making live shows, where major title defenses took place. Television titles provided a championship that would be defended on the weekly television shows. Examples of a television championship include the AEW TNT Championship (named after the Turner Network Television, home network of AEW's flagship broadcast ''AEW Dynamite, Dynamite'') and the ROH World Television Championship. Past TV titles include the WCW World Television Championship, the ECW World Television Championship, and the TNA Television Championship. 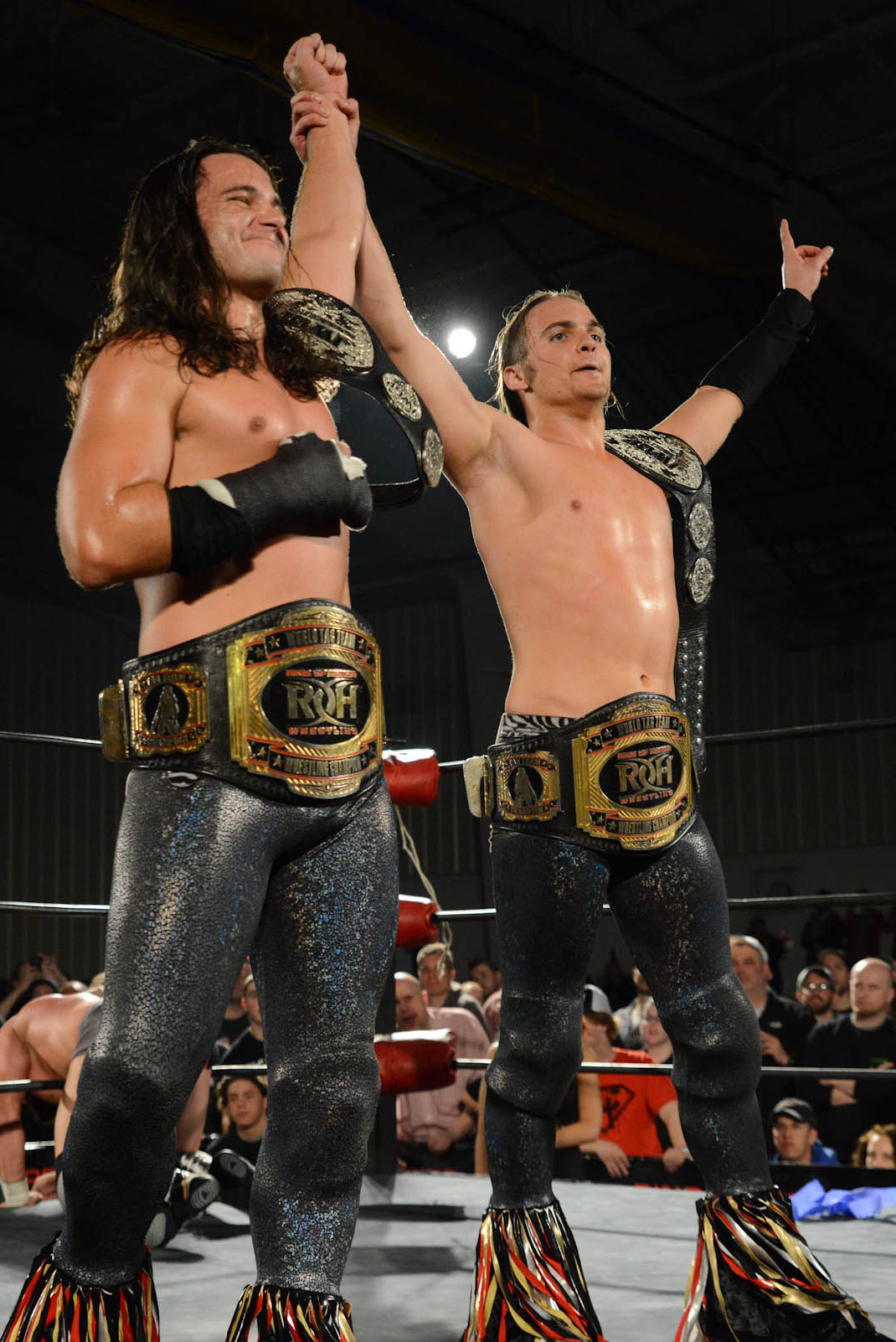 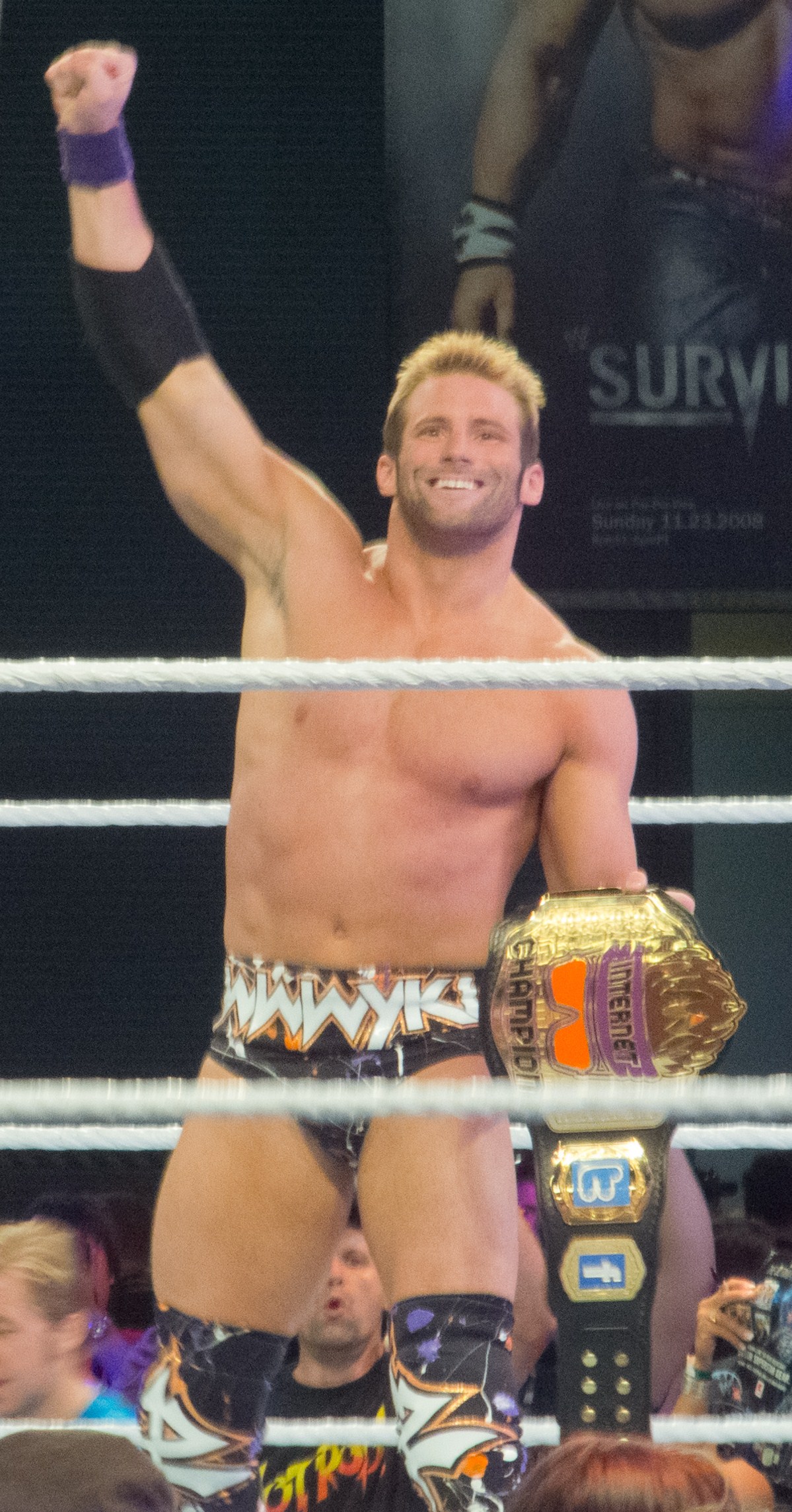