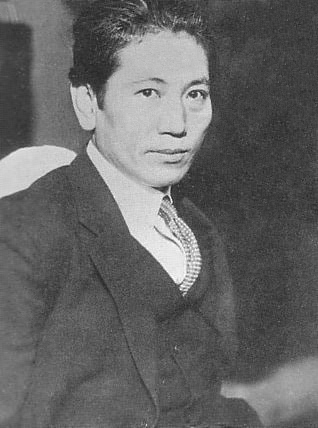 were
Japan , image_flag = Flag of Japan.svg , alt_flag = Centered deep red circle on a white rectangle , image_coat = Imperial Seal of Japan.svg , alt_coat = Golden circle subdiv ...
ese performers who provided live
narration Narration is the use of a written or spoken commentary to storytelling, convey a narrative, story to an audience. Narration is conveyed by a narrator: a specific person or unspecified literary voice, developed by the creator of the story, to delive ...
for
silent film A silent film is a film with no synchronized Sound recording and reproduction, recorded sound (and in particular, no audible dialogue). In silent films for entertainment, the plot may be conveyed by the use of intertitle, title cards, written in ...
s (both Japanese films and Western films). ''Benshi'' are sometimes called or .

During silent films, the ''benshi'' stood to the side of the screen and introduced and related the story to the audience. In theatrical style, ''benshi'' often spoke for the characters on-screen and played multiple roles. Stemming from the traditions of ''
kabuki is a classical form of Japanese dance-drama. Kabuki theatre is known for its heavily-stylised performances, the often-glamorous costumes worn by performers, and for the elaborate make-up worn by some of its performers. Kabuki is thought to h ...
'' and '' Noh'' theaters, the benshi's narration and general commentary were an important part of the Japanese silent film experience. The ''benshi'' also provided translation for foreign (mostly American) movies. Much like in the West, Japanese silent films were often accompanied by live music (in addition to the ''benshi''). However, unlike Western films, which tended to have a theatre organ as accompaniment, Japanese films had a score which supported the traditional Japanese instruments of a ''kabuki'' play. Since ''benshi'' performed without external amplification, they had to carefully coordinate with the orchestra to be heard. At that time, theaters typically seated 1000, so a trademark of successful ''benshi'' was the ability to project their voices into large spaces. Famous benshi active in the silent era include Musei Tokugawa (at the Aoikan and Musashinokan theaters), Saburō Somei (at the Denkikan), Rakuten Nishimura, Raiyū Ikoma (at the Teikokukan), Mitsugu Ōkura, and Shirō Ōtsuji. In the 1995 film ''Picture Bride (film), Picture Bride,'' Toshirō Mifune portrays a ''benshi'' who traveled to sugar cane plantations in Hawaii during the early 20th century.

As the film industry and art form developed in Japan, the presence of a ''benshi'' came to be part of the film. Benshi read the intertitles on silent films and voiced all on-screen characters. Perhaps most significantly for filmmakers, ''benshi'' would add their own commentary, explaining what was happening in a shot or describing what had happened in confusing edits or sudden transitions. Some ''benshi'' were known to interpret and add to a script, for example reciting poetry to accompany a moving visual. In addition, it was traditional for the ''benshi'' to introduce the film, even giving a brief lecture about the history of the setting. This meant that filmmakers could assume that a live narrator, accustomed to improvisation, would be present at the showing to explain scenes or even explain missing scenes or unfilmed action. Perhaps because most early Japanese films were simply ''kabuki'' plays adapted to film, the characterization style ''benshi'' performed roles strongly influenced by the narrators in ''kabuki'' or a ''noh'' chorus—a grave, dramatic, exaggerated style. Due to the influence of ''kabuki'', audiences were not distracted by a single ''benshi'' voicing male and female roles, regardless of the gender of the ''benshi''.

In 1927, there were 6,818 ''benshi'', including 180 women. Many ''benshi'' were famous in their own right and garnered great acclaim. The presence of a ''benshi'' was the aspect of the film presentation that drew in the audience, more so than the actors appearing in the film, and promotional posters would frequently include a photo of the ''benshi'' announcing the movie. The silent film era lasted until the mid-1930s in Japan in part due to ''benshi'', despite the sound film, introduction of sound in full-length films in the late 1920s. The adoption of this new technology was slowed by the popularity and influence of the ''benshi'' (in addition to the high costs to the cinemas and production companies). Though the tradition has mostly faded, there are a few remaining active ''benshi'' in Japan (e.g., Midori Sawato).

Benshi in other cultures

* The ''benshi'' tradition was adopted in Cinema of Taiwan, Taiwan under the name ''piansu'' (). * ''Benshi'' were present in Cinema of Korea, Korea from the first decade of the twentieth century where they were called "byeonsa" (변사). * In the Soviet Union, USSR, during the early years of the Brezhnev era, the availability of foreign films was severely restricted. Goskino, The USSR State Committee for Cinematography held closed-door screenings of many Western films, open mainly to workers in the film industry, politicians, and other members of the elite. Those screenings were interpreted simultaneously by interpreters who specialized in films, where an effective conveyance of humour, idioms, and other subtleties of speech were required. Some of the most prolific "Gavrilov translation, Gavrilov translators" began their careers at such screenings.

The underlying concept of benshi, live narration of film, continues to work its way into performance practices. The actual practice of "benshi" is most commonly referenced in relation to live film narration largely due to it having been and when the practice was more formalized and financed. As evidenced by the (above) listings of "benshi" in other cultures, the art of cinema accompanied by a live performer was as international then as it is now. There are groups in the United States seeking to revive this form and to continue exploring the possibilities of altering the form in the spirit of experimentation from which the practice emerged. Likewise, new attempts to subvert traditional notions of storytelling and film watching are underway. Some performers interject commentary into films, drawing from a century of social critique, often presenting popular films along with new dialog and narrative intended to juxtapose their ideas with those of the audience. While some have adopted the term "Neo-Benshi", other performers have chosen to adopt the title "movieteller" as an alternative. They believe it emphasizes the multicultural past and future(s) of the form, while inviting further experimentation with the medium, such as a live narration of one's own films, the implementation of instruments as narrative devices, or any instance where a human contingent mediates between an audience and an image.

*
The Benshi Tradition: Cinema = Performance
by Tosh Berman (1995) *
Introduction to Japanese silent cinema with an interview from a modern-day benshi