''Zika virus'' (ZIKV) (pronounced or ) is a member of the virus family ''Flaviviridae''. It is spread by daytime-active ''Aedes'' mosquitoes, such as ''A. aegypti'' and ''A. albopictus''. Its name comes from the Ziika Forest of Uganda, where the virus was first isolated in 1947. ''Zika virus'' shares a genus with the dengue, yellow fever, Japanese encephalitis, and West Nile viruses. Since the 1950s, it has been known to occur within a narrow equatorial belt from Africa to Asia. From 2007 to , the virus spread eastward, across the Pacific Ocean to the Americas, leading to the 2015–2016 Zika virus epidemic. The infection, known as Zika fever or ''Zika virus'' disease, often causes no or only mild symptoms, similar to a very mild form of dengue fever. While there is no specific treatment, paracetamol (acetaminophen) and rest may help with the symptoms. Zika can spread from a pregnant woman to her baby. This can result in microcephaly, severe brain malformations, and other birth defects. Zika infections in adults may result rarely in Guillain–Barré syndrome. In January 2016, the United States Centers for Disease Control and Prevention (CDC) issued travel guidance on affected countries, including the use of enhanced precautions, and guidelines for pregnant women including considering postponing travel. Other governments or health agencies also issued similar travel warnings, while Colombia, the Dominican Republic, Puerto Rico, Ecuador, El Salvador, and Jamaica advised women to postpone getting pregnant until more is known about the risks.

''Zika virus'' belongs to the family ''Flaviviridae'' and the genus ''Flavivirus'', thus is related to the dengue, yellow fever, Japanese encephalitis, and West Nile viruses. Like other flaviviruses, ''Zika virus'' is enveloped and icosahedral and has a nonsegmented, single-stranded, 10 kilobase, positive-sense RNA genome. It is most closely related to the Spondweni virus and is one of the two known viruses in the Spondweni virus clade. 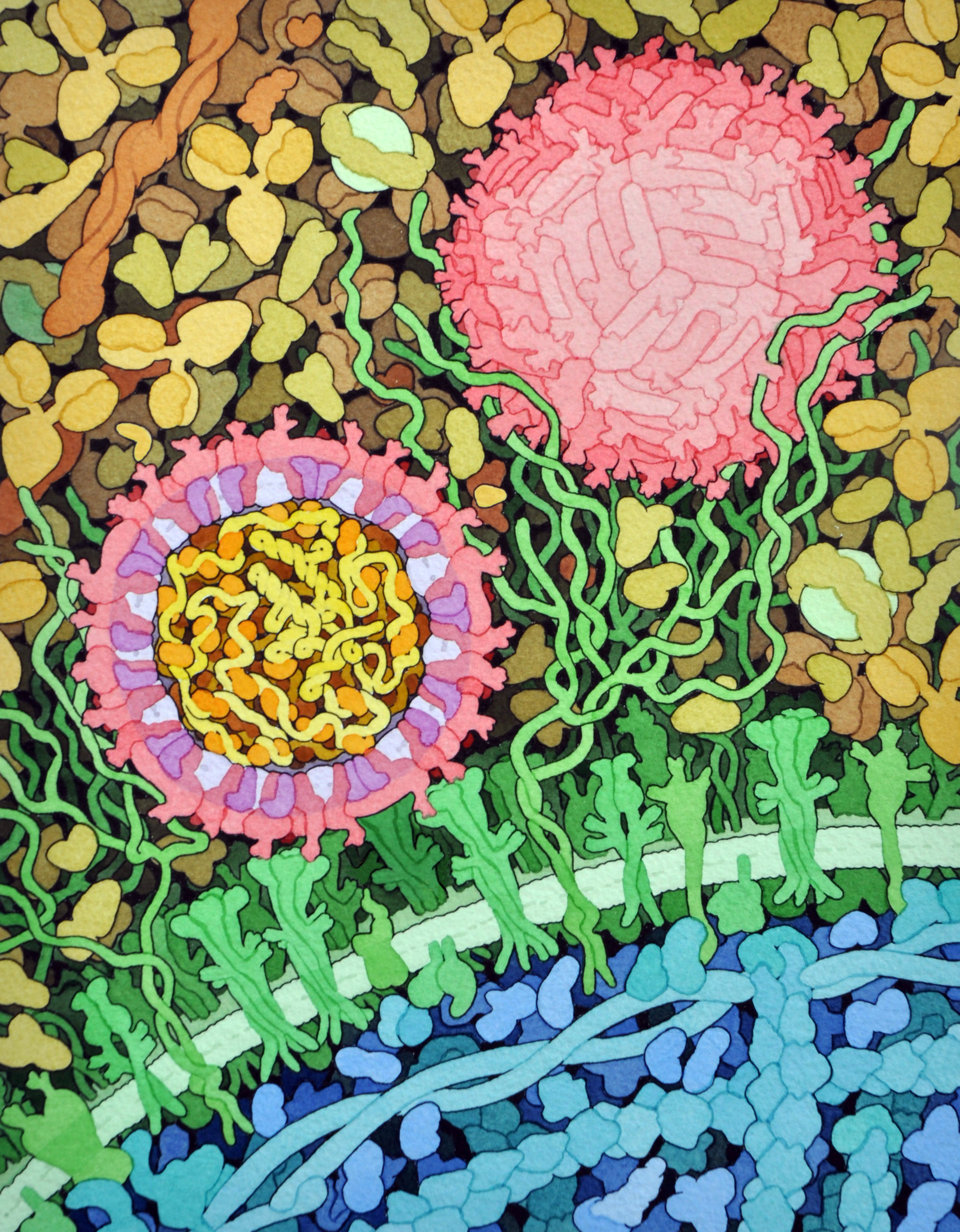 A positive-sense RNA genome can be directly translated into viral proteins. As in other flaviviruses, such as the similarly sized West Nile virus, the RNA genome encodes seven nonstructural proteins and three structural proteins in the form of a single polyprotein (). One of the structural proteins encapsulates the virus. This protein is the flavivirus envelope glycoprotein, that binds to the endosomal membrane of the host cell to initiate endocytosis. The RNA genome forms a nucleocapsid along with copies of the 12-kDa capsid protein. The nucleocapsid, in turn, is enveloped within a host-derived membrane modified with two viral glycoproteins. Viral genome replication depends on the making of double-stranded RNA from the single-stranded, positive-sense RNA (ssRNA(+)) genome followed by transcription and replication to provide viral mRNAs and new ssRNA(+) genomes. A longitudinal study shows that 6 hours after cells are infected with ''Zika virus'', the vacuoles and mitochondria in the cells begin to swell. This swelling becomes so severe, it results in cell death, also known as paraptosis. This form of programmed cell death requires gene expression. IFITM3 is a trans-membrane protein in a cell that is able to protect it from viral infection by blocking virus attachment. Cells are most susceptible to Zika infection when levels of IFITM3 are low. Once the cell has been infected, the virus restructures the endoplasmic reticulum, forming the large vacuoles, resulting in cell death. There are two Zika lineages: the African lineage and the Asian lineage. Phylogenetic studies indicate that the virus spreading in the Americas is 89% identical to African genotypes, but is most closely related to the Asian strain that circulated in French Polynesia during the 20132014 outbreak. The Asian strain appears to have first evolved around 1928.

The vertebrate hosts of the virus were primarily monkeys in a so-called enzootic mosquito-monkey-mosquito cycle, with only occasional transmission to humans. Before the current pandemic began in 2007, Zika "rarely caused recognized 'spillover' infections in humans, even in highly enzootic areas". Infrequently, however, other arboviruses have become established as a human disease and spread in a mosquito–human–mosquito cycle, like the yellow fever virus and the dengue fever virus (both flaviviruses), and the chikungunya virus (a togavirus). Though the reason for the pandemic is unknown, dengue, a related arbovirus that infects the same species of mosquito vectors, is known in particular to be intensified by urbanization and globalization. Zika is primarily spread by ''Aedes aegypti'' mosquitoes, and can also be transmitted through sexual contact or blood transfusions. The basic reproduction number (''R''0, a measure of transmissibility) of ''Zika virus'' has been estimated to be between 1.4 and 6.6 . In 2015, news reports drew attention to the rapid spread of Zika in Latin America and the Caribbean. At that time, the Pan American Health Organization published a list of countries and territories that experienced "local ''Zika virus'' transmission" comprising Barbados, Bolivia, Brazil, Colombia, the Dominican Republic, Ecuador, El Salvador, French Guiana, Guadeloupe, Guatemala, Guyana, Haiti, Honduras, Martinique, Mexico, Panama, Paraguay, Puerto Rico, Saint Martin, Suriname, and Venezuela. By August 2016, more than 50 countries had experienced active (local) transmission of ''Zika virus''.

Zika is primarily spread by the female ''Aedes aegypti'' mosquito, which is active mostly in the daytime. The mosquitos must feed on blood to lay eggs. The virus has also been isolated from a number of arboreal mosquito species in the genus ''Aedes'', such as ''A. africanus'', ''A. apicoargenteus'', ''A. furcifer'', ''A. hensilli'', ''A. luteocephalus'', and ''A. vittatus'', with an extrinsic incubation period in mosquitoes around 10 days. The true extent of the vectors is still unknown. Zika has been detected in many more species of ''Aedes'', along with ''Anopheles coustani, Mansonia uniformis'', and ''Culex perfuscus'', although this alone does not incriminate them as vectors. To detect the presence of the virus usually requires genetic material to be analysed in a lab using the technique RT-PCR. A much cheaper and faster method involves shining a light at the head and thorax of the mosquito, and detecting chemical compounds characteristic of the virus using near-infrared spectroscopy. Transmission by ''A. albopictus'', the tiger mosquito, was reported from a 2007 urban outbreak in Gabon, where it had newly invaded the country and become the primary vector for the concomitant chikungunya and dengue virus outbreaks. New outbreaks can occur if a person carrying the virus travels to another region where ''A. albopictus'' is common. The potential societal risk of Zika can be delimited by the distribution of the mosquito species that transmit it. The global distribution of the most cited carrier of Zika, ''A. aegypti'', is expanding due to global trade and travel. ''A. aegypti'' distribution is now the most extensive ever recorded – on parts of all continents except Antarctica, including North America and even the European periphery (Madeira, the Netherlands, and the northeastern Black Sea coast). A mosquito population capable of carrying Zika has been found in a Capitol Hill neighborhood of Washington, DC, and genetic evidence suggests they survived at least four consecutive winters in the region. The study authors conclude that mosquitos are adapting for persistence in a northern climate. ''Zika virus'' appears to be contagious via mosquitoes for around a week after infection. The virus is thought to be infectious for a longer period of time after infection (at least 2 weeks) when transmitted via semen. Research into its ecological niche suggests that Zika may be influenced to a greater degree by changes in precipitation and temperature than dengue, making it more likely to be confined to tropical areas. However, rising global temperatures would allow for the disease vector to expand their range further north, allowing Zika to follow.

Zika can be transmitted from men and women to their sexual partners; most known cases involve transmission from symptomatic men to women. As of April 2016, sexual transmission of Zika has been documented in six countries – Argentina, Australia, France, Italy, New Zealand, and the United States – during the 2015 outbreak. ZIKV can persist in semen for several months, with viral RNA detected up to one year. The virus replicates in the human testis, where it infects several cell types including testicular macrophages, peritubular cells and germ cells, the spermatozoa precursors. Semen parameters can be altered in patients for several weeks post-symptoms onset, and spermatozoa can be infectious. Since October 2016, the CDC has advised men who have traveled to an area with Zika should use condoms or not have sex for at least six months after their return as the virus is still transmissible even if symptoms never develop.

''Zika virus'' can spread by vertical (or "mother-to-child") transmission, during pregnancy or at delivery.