Click Here for Items Related To - Yorktown-class aircraft carrier
The ''Yorktown'' class was a class of three aircraft carriers built for the United States Navy and completed shortly before World War II, the , , and . They immediately followed , the first U.S. aircraft carrier built as such, and benefited in design from experience with ''Ranger'' and the earlier , which were conversions into carriers of two battlecruisers that were to be scrapped to comply with the Washington Naval Treaty, an arms limitation accord. These ships bore the brunt of early action in the Pacific War, and two of the three were lost: ''Yorktown'', sunk at the Battle of Midway, and ''Hornet'', sunk in the Battle of the Santa Cruz Islands. ''Enterprise'', the sole survivor of the class, was the most decorated ship of the U.S. Navy in the Second World War. After efforts to save her as a museum ship failed, she was scrapped in 1958.

In an early example of modern weapons development, the ''Yorktown'' class was a result of standardized war gaming exercises using and the Newport Naval War College. Analysis of the results, combined with lessons learned from operations with the large converted battlecruiser ''Lexington''-class in comparison with the smaller purpose-built ''Ranger'', highlighted the greater flexibility presented by large air groups and fast ships. These became, along with torpedo protection, the guiding principles in the ''Yorktown'' class designs. With the commissioning of USS ''Ranger'', the USN had 54,400 tons of carrier construction left under the Washington Treaty. Initially, the development plan for the class envisioned a 17,000-ton design that would allow the Navy to build three ships and stay within the 135,000-ton Washington Naval Treaty limit on aircraft carrier tonnage. However, this design could not achieve the desired high operating speed without sacrificing protection features and air wing capacity. In addition, the London Treaty of 1930 required that the USS ''Langley'' be added into the tonnage limits, no longer being classified as an "experimental" carrier. In the end, the Navy chose instead to build two 19,000-ton carriers that could fulfill the design vision; though smaller in displacement than the USS ''Lexington'' class and a nominal 27,000-ton limit design, the ships retained high-powered machinery, hull volume and flight deck area that allowed for a fast and capacious design, but also improved durability and provided close to an all-weather ability to launch aircraft. These were versatile carriers that could carry and operate over 80 aircraft, almost as many as the much larger ''Lexington'' class. Plans initially called for a flush deck with no island. However, the Royal Navy had constructed several flush-deck carriers, and the problems encountered in those designs were known to the US Navy; the US naval attaché in Britain, J.C. Hunsacker, reported that had problems exhausting boiler smoke without proper smoke stacks. In addition to the engineering constraints, it was becoming evident that larger air groups and antiaircraft batteries would be easier to command from an island design. In the end BuAer retracted all demands for flush decked carriers. Conversion of USS ''Langley'' into a seaplane tender allowed the Navy to fill in the remaining available treaty tonnage with a scaled-down version of the class, which became the 14,700-ton . Service experience validated the advantages of the larger hull design. USS ''Ranger'' proved to be unable to withstand rougher weather in the Pacific, while lack of virtually any protective features soon relegated her to a training ship. USS ''Wasp''s lack of torpedo protection contributed to her loss in the Pacific theater. The abandonment of the arms limitation treaties system in 1937 allowed the US to begin building more carriers, and the first of this new carrier program was ''Hornet'', another of the class, commissioned in 1941. Improvements to the ''Yorktown'' design and freedom from the Washington Treaty limitations brought about the s. The ''Yorktown''s carried a seldom-used catapult on the hangar deck. This catapult was subsequently eliminated from U.S. carriers as it was relatively useless in operation. The hangar-deck catapult was removed from ''Enterprise'' and ''Hornet'' in late June 1942. All three ships of the ''Yorktown'' class were built at the Newport News Shipbuilding Company, Newport News, Virginia.

The three ships of this class are noted for bearing the brunt of the fighting in the early months of the Pacific War, most notably during the Battle of the Coral Sea, the Battle of Midway, and the Guadalcanal campaign. During the latter campaign, ''Hornet'' and later ''Enterprise'' had the distinction of being the only operational carrier in the United States Pacific Fleet. ''Enterprise'' was at sea on the morning of 7 December 1941 (the day of the Attack on Pearl Harbor). That evening, ''Enterprise'', screened by six of her Grumman F4F Wildcat fighters, put into Pearl Harbor for fuel and supplies. The aircraft were fired on by anti-aircraft defenses, and one pilot radioed in, reporting that his aircraft was an American aircraft. ''Enterprise'' later participated in the first offensive actions against Japan, launching attacks against the Marshall Islands, Wake, and Marcus Island. ''Yorktown'' transferred to the Pacific on 16 December 1941 and later raided the Gilbert Islands in the same operation as ''Enterprise''. Along with , she raided bases in New Guinea, then participated in the Battle of the Coral Sea. Her planes helped sink the and damaged the carrier . Damaged by Japanese carrier aircraft, ''Yorktown'' returned to Pearl Harbor and was hastily repaired in time to participate in the Battle of Midway. ''Hornet'' spent the first months of the war training in Norfolk, Virginia, before being assigned to the Doolittle Raid. Loaded with a squadron of B-25 bombers and escorted by ''Enterprise'', the ship launched the first air raids against the Japanese mainland. 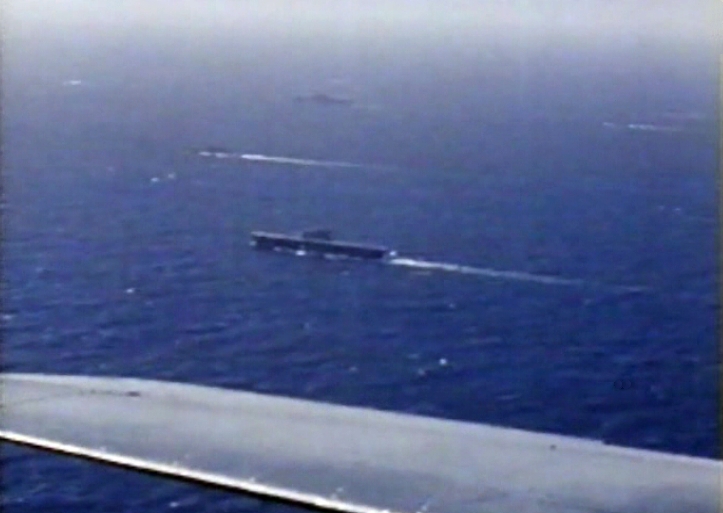 All three ships of the class saw action during the Battle of Midway (4–7 June 1942), ''Enterprise'' and ''Yorktown'' aircraft were responsible for sinking all four Japanese carriers engaged in the battle, while ''Hornet'' assisted in the sinking of one heavy cruiser and severely damaging another. All three carriers suffered severe losses among their air groups, most notably ''Hornet''s Torpedo Squadron 8, which lost 15 aircraft with only a single surviving airman. ''Yorktown'' was damaged by aerial bombs and torpedoes and abandoned on 4 June. Later re-manned by repair crews, the ship was spotted and torpedoed by a Japanese submarine and eventually sank on 7 June 1942. ''Enterprise'' was assigned to the invasion of Guadalcanal and participated in preliminary strikes on the island. She suffered moderate damage during the Battle of the Eastern Solomons but was repaired in time to join ''Hornet'' in the Battle of the Santa Cruz Islands. ''Hornet'' was severely damaged during the latter engagement and had to be abandoned. Attempts to scuttle the ship by her escorts failed, and she was left adrift before finally being sunk by Japanese destroyers on 27 October 1942. ''Enterprise'' was again damaged during the battle, but was repaired enough to deliver her air group to Guadalcanal, where it participated in the Naval Battle of Guadalcanal. ''Enterprise'' aircraft assisted in finishing off the heavily damaged battleship and were instrumental in destroying the Japanese transport fleet, thereby ending Japan's last serious attempt at reclaiming the island. After a lengthy overhaul and repair period at Bremerton, Washington, ''Enterprise'' joined the Central Pacific Fleet as part of the Fast Carrier Task Force. She participated in every major invasion of the Central Pacific campaign, including the Battle of the Philippine Sea and the Battle of Leyte Gulf. Her air groups contributed to the development of carrier night operations, executing a night air raid on Truk Lagoon and operating as a specialized night air group towards the end of the war. ''Enterprise'' was finally put out of action on 14 May 1945 when she was struck in the forward elevator by a ''kamikaze'' aircraft flown by Japanese pilot Lt. Shunsuke Tomiyasu,