Wool is the textile fiber obtained from sheep and other animals, including cashmere and mohair from goats, qiviut from muskoxen, hide and fur clothing from bison, angora from rabbits, and other types of wool from camelids. Wool consists of protein together with a small percentage of lipids. In this regard it is chemically quite distinct from the more dominant textile, cotton, which is mainly cellulose. 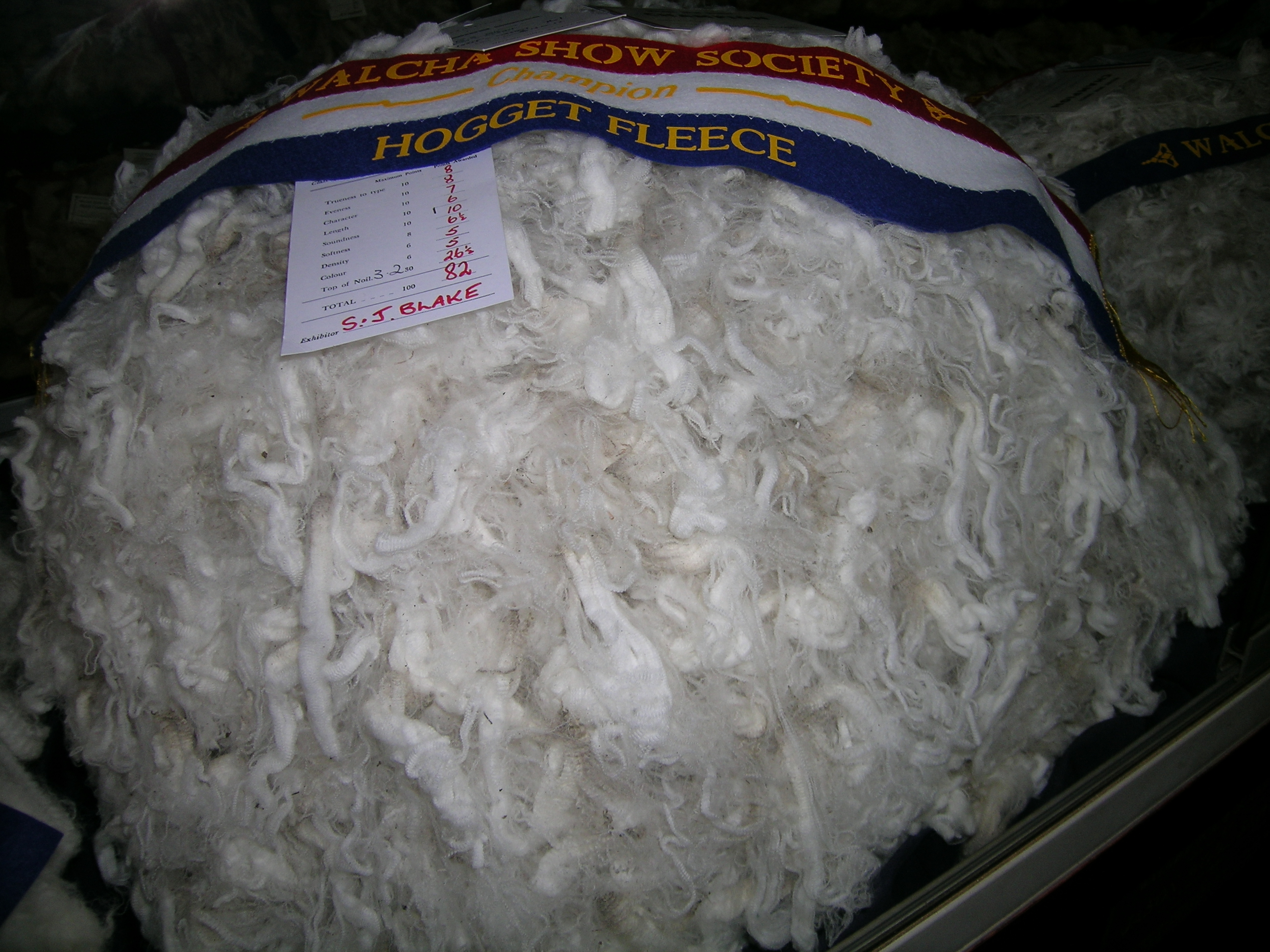 Wool is produced by follicles which are small cells located in the skin. These follicles are located in the upper layer of the skin called the epidermis and push down into the second skin layer called the dermis as the wool fibers grow. Follicles can be classed as either primary or secondary follicles. Primary follicles produce three types of fiber: kemp, medullated fibers, and true wool fibers. Secondary follicles only produce true wool fibers. Medullated fibers share nearly identical characteristics to hair and are long but lack crimp and elasticity. Kemp fibers are very coarse and shed out.

Wool's scaling and crimp make it easier to spin the fleece by helping the individual fibers attach to each other, so they stay together. Because of the crimp, wool fabrics have greater bulk than other textiles, and they hold air, which causes the fabric to retain heat. Wool has a high specific thermal resistance, so it impedes heat transfer in general. This effect has benefited desert peoples, as Bedouins and Tuaregs use wool clothes for insulation. Felting of wool occurs upon hammering or other mechanical agitation as the microscopic barbs on the surface of wool fibers hook together. Felting generally comes under two main areas, dry felting or wet felting. Wet felting occurs when water and a lubricant (soap) are applied to the wool which is then agitated until the fibers mix and bond together. Some natural felting can occur on the animals back. Wool has several qualities that distinguish it from hair/fur: it is crimped and elastic. The amount of crimp corresponds to the fineness of the wool fibers. A fine wool like Merino may have up to 40 crimps per centimetre (100 crimps per inch), while coarser wool like karakul may have less than one (one or two crimps per inch). In contrast, hair has little if any scale and no crimp, and little ability to bind into yarn. On sheep, the hair part of the fleece is called kemp. The relative amounts of kemp to wool vary from breed to breed and make some fleeces more desirable for spinning, felting, or carding into batts for quilts or other insulating products, including the famous tweed cloth of Scotland. Wool fibers readily absorb moisture, but are not hollow. Wool can absorb almost one-third of its own weight in water. Wool absorbs sound like many other fabrics. It is generally a creamy white color, although some breeds of sheep produce natural colors, such as black, brown, silver, and random mixes. Wool ignites at a higher temperature than cotton and some synthetic fibers. It has a lower rate of flame spread, a lower rate of heat release, a lower heat of combustion, and does not melt or drip; it forms a char that is insulating and self-extinguishing, and it contributes less to toxic gases and smoke than other flooring products when used in carpets. Wool carpets are specified for high safety environments, such as trains and aircraft. Wool is usually specified for garments for firefighters, soldiers, and others in occupations where they are exposed to the likelihood of fire. Wool causes an allergic reaction in some people. 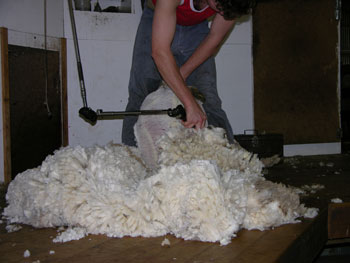 Sheep shearing is the process by which the woolen fleece of a sheep is cut off. After shearing, the wool is separated into four main categories: fleece (which makes up the vast bulk), broken, bellies, and locks. The quality of fleeces is determined by a technique known as wool classing, whereby a qualified person, called a wool classer, groups wools of similar grading together to maximize the return for the farmer or sheep owner. In Australia before being auctioned, all Merino fleece wool is objectively measured for average diameter (micron), yield (including the amount of vegetable matter), staple length, staple strength, and sometimes color and comfort factor. 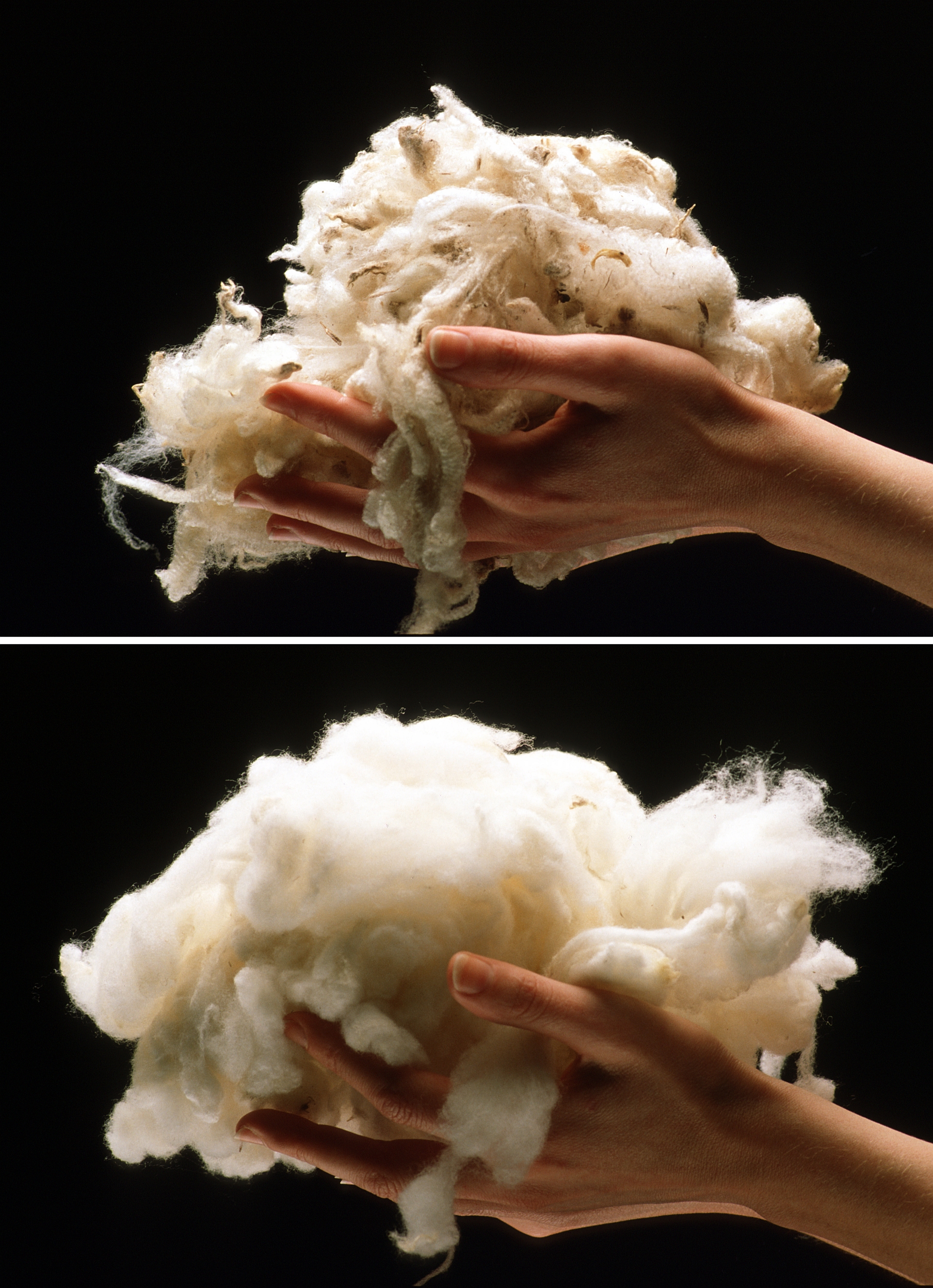 Wool straight off a sheep is known as "raw wool”, “greasy wool" or "wool in the grease". This wool contains a high level of valuable lanolin, as well as the sheep's dead skin and sweat residue, and generally also contains pesticides and vegetable matter from the animal's environment. Before the wool can be used for commercial purposes, it must be scoured, a process of cleaning the greasy wool. Scouring may be as simple as a bath in warm water or as complicated as an industrial process using detergent and alkali in specialized equipment. In north west England, special potash pits were constructed to produce potash used in the manufacture of a soft soap for scouring locally produced white wool. In commercial wool, vegetable matter is often removed by chemical carbonization. In less-processed wools, vegetable matter may be removed by hand and some of the lanolin left intact through the use of gentler detergents. This semigrease wool can be worked into yarn and knitted into particularly water-resistant mittens or sweaters, such as those of the Aran Island fishermen. Lanolin removed from wool is widely used in cosmetic products, such as hand creams.

Raw wool has many impurities; vegetable matter, sand, dirt and yolk which is a mixture of suint (sweat), grease, urine stains and dung locks. The sheep's body yields many types of wool with differing strengths, thicknesses, length of staple and impurities. The raw wool (greasy) is processed into 'top'. 'Worsted top' requires strong straight and parallel fibres.

The quality of wool is determined by its fiber diameter, crimp, yield, color, and staple strength. Fiber diameter is the single most important wool characteristic determining quality and price. Merino wool is typically in length and is very fine (between 12 and 24 microns). The finest and most valuable wool comes from Merino hoggets. Wool taken from sheep produced for meat is typically coarser, and has fibers in length. Damage or breaks in the wool can occur if the sheep is stressed while it is growing its fleece, resulting in a thin spot where the fleece is likely to break. Wool is also separated into grades based on the measurement of the wool's diameter in microns and also its style. These grades may vary depending on the breed or purpose of the wool. For example: Any wool finer than 25 microns can be used for garments, while coarser grades are used for outerwear or rugs. The finer the wool, the softer it is, while coarser grades are more durable and less prone to pilling. The finest Australian and New Zealand Merino wools are known as 1PP, which is the industry benchmark of excellence for Merino wool 16.9 microns and finer. This style represents the top level of fineness, character, color, and style as determined on the basis of a series of parameters in accordance with the original dictates of British wool as applied by the Australian Wool Exchange (AWEX) Council. Only a few dozen of the millions of bales auctioned every year can be classified and marked 1PP. In the United States, three classifications of wool are named in the Wool Products Labeling Act of 1939. Wool is "the fiber from the fleece of the sheep or lamb or hair of the Angora or Cashmere goat (and may include the so-called specialty fibers from the hair of the camel, alpaca, llama, and vicuna) which has never been reclaimed from any woven or felted wool product". "Virgin wool" and "new wool" are also used to refer to such never used wool. There are two categories of recycled wool (also called reclaimed or shoddy wool). "Reprocessed wool" identifies "wool which has been woven or felted into a wool product and subsequently reduced to a fibrous state without having been used by the ultimate consumer". "Reused wool" refers to such wool that ''has'' been used by the ultimate consumer.

Wild sheep were more hairy than woolly. Although sheep were domesticated some 9,000 to 11,000 years ago, archaeological evidence from statuary found at sites in Iran suggests selection for woolly sheep may have begun around 6000 BC, with the earliest woven wool garments having only been dated to two to three thousand years later. Woolly sheep were introduced into Europe from the Near East in the early part of the 4th millennium BC. The oldest known European wool textile, ca. 1500 BC, was preserved in a Danish bog. Prior to invention of shears—probably in the Iron Age—the wool was plucked out by hand or by bronze combs. In Roman times, wool, linen, and leather clothed the European population; cotton from India was a curiosity of which only naturalists had heard, and silks, imported along the Silk Road from China, were extravagant luxury goods. Pliny the Elder records in his ''Natural History'' that the reputation for producing the finest wool was enjoyed by Tarentum, where selective breeding had produced sheep with superior fleeces, but which required special care. In medieval times, as trade connections expanded, the Champagne fairs revolved around the production of wool cloth in small centers such as Provins. The network developed by the annual fairs meant the woolens of Provins might find their way to Naples, Sicily, Cyprus, Majorca, Spain, and even Constantinople. The wool trade developed into serious business, a generator of capital. In the 13th century, the wool trade became the economic engine of the Low Countries and central Italy. By the end of the 14th century, Italy predominated, though Italian production turned to silk in the 16th century.