Advances in MOSFET (MOS transistor) wireless technology enabled the development of digital wireless networks. The wide adoption of RF CMOS (radio frequency CMOS), power MOSFET and LDMOS (lateral diffused MOS) devices led to the development and proliferation of digital wireless networks by the 1990s, with further advances in MOSFET technology leading to increasing bandwidth in the 2000s (Edholm's law). Most of the essential elements of wireless networks are built from MOSFETs, including the mobile transceivers, base station modules, routers, RF power amplifiers, telecommunication circuits, RF circuits, and radio transceivers, in networks such as 2G, 3G, and 4G. 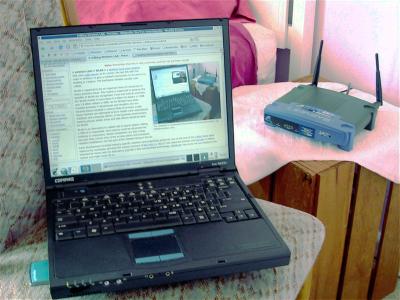 * ''Terrestrial microwave'' – Terrestrial microwave communication uses Earth-based transmitters and receivers resembling satellite dishes. Terrestrial microwaves are in the low gigahertz range, which limits all communications to line-of-sight. Relay stations are spaced approximately apart. * ''Communications satellites'' – Satellites communicate via microwave radio waves, which are not deflected by the Earth's atmosphere. The satellites are stationed in space, typically in geosynchronous orbit above the equator. These Earth-orbiting systems are capable of receiving and relaying voice, data, and TV signals. * ''Cellular and PCS systems'' use several radio communications technologies. The systems divide the region covered into multiple geographic areas. Each area has a low-power transmitter or radio relay antenna device to relay calls from one area to the next area. * ''Radio and spread spectrum technologies'' – Wireless local area networks use a high-frequency radio technology similar to digital cellular and a low-frequency radio technology. Wireless LANs use spread spectrum technology to enable communication between multiple devices in a limited area. IEEE 802.11 defines a common flavor of open-standards wireless radio-wave technology known as Wi-Fi. * ''Free-space optical communication'' uses visible or invisible light for communications. In most cases, line-of-sight propagation is used, which limits the physical positioning of communicating devices.

Wireless personal area networks (WPANs) connect devices within a relatively small area, that is generally within a person's reach. For example, both Bluetooth radio and invisible infrared light provides a WPAN for interconnecting a headset to a laptop. ZigBee also supports WPAN applications. Wi-Fi PANs are becoming commonplace (2010) as equipment designers start to integrate Wi-Fi into a variety of consumer electronic devices. Intel "My WiFi" and Windows 7 "virtual Wi-Fi" capabilities have made Wi-Fi PANs simpler and easier to set up and configure.

A wireless local area network (WLAN) links two or more devices over a short distance using a wireless distribution method, usually providing a connection through an access point for internet access. The use of spread-spectrum or OFDM technologies may allow users to move around within a local coverage area, and still remain connected to the network. Products using the IEEE 802.11 WLAN standards are marketed under the Wi-Fi brand name . Fixed wireless technology implements point-to-point links between computers or networks at two distant locations, often using dedicated microwave or modulated laser light beams over line of sight paths. It is often used in cities to connect networks in two or more buildings without installing a wired link. To connect to Wi-Fi, sometimes are used devices like a router or connecting HotSpot using mobile smartphones.

A wireless ad hoc network, also known as a wireless mesh network or mobile ad hoc network (MANET), is a wireless network made up of radio nodes organized in a mesh topology. Each node forwards messages on behalf of the other nodes and each node performs routing. Ad hoc networks can "self-heal", automatically re-routing around a node that has lost power. Various network layer protocols are needed to realize ad hoc mobile networks, such as Distance Sequenced Distance Vector routing, Associativity-Based Routing, Ad hoc on-demand Distance Vector routing, and Dynamic source routing.

Wireless metropolitan area networks are a type of wireless network that connects several wireless LANs. * WiMAX is a type of Wireless MAN and is described by the IEEE 802.16 standard.

Wireless wide area networks are wireless networks that typically cover large areas, such as between neighbouring towns and cities, or city and suburb. These networks can be used to connect branch offices of business or as a public Internet access system. The wireless connections between access points are usually point to point microwave links using parabolic dishes on the 2.4 GHz and 5.8Ghz band, rather than omnidirectional antennas used with smaller networks. A typical system contains base station gateways, access points and wireless bridging relays. Other configurations are mesh systems where each access point acts as a relay also. When combined with renewable energy systems such as photovoltaic solar panels or wind systems they can be stand alone systems.

A cellular network or mobile network is a radio network distributed over land areas called cells, each served by at least one fixed-location transceiver, known as a cell site or base station. In a cellular network, each cell characteristically uses a different set of radio frequencies from all their immediate neighbouring cells to avoid any interference. When joined together these cells provide radio coverage over a wide geographic area. This enables a large number of portable transceivers (e.g., mobile phones, pagers, etc.) to communicate with each other and with fixed transceivers and telephones anywhere in the network, via base stations, even if some of the transceivers are moving through more than one cell during transmission. Although originally intended for cell phones, with the development of smartphones, cellular telephone networks routinely carry data in addition to telephone conversations: *Global System for Mobile Communications (GSM): The GSM network is divided into three major systems: the switching system, the base station system, and the operation and support system. The cell phone connects to the base system station which then connects to the operation and support station; it then connects to the switching station where the call is transferred to where it needs to go. GSM is the most common standard and is used for a majority of cell phones. *Personal Communications Service (PCS): PCS is a radio band that can be used by mobile phones in North America and South Asia. Sprint happened to be the first service to set up a PCS. *D-AMPS: Digital Advanced Mobile Phone Service, an upgraded version of AMPS, is being phased out due to advancement in technology. The newer GSM networks are replacing the older system.

Space networks are networks used for communication between spacecraft, usually in the vicinity of the Earth. The example of this is NASA's Space Network.

In a general sense, wireless networks offer a vast variety of uses by both business and home users.

"Now, the industry accepts a handful of different wireless technologies. Each wireless technology is defined by a standard that describes unique functions at both the Physical and the Data Link layers of the OSI model. These standards differ in their specified signaling methods, geographic ranges, and frequency usages, among other things. Such differences can make certain technologies better suited to home networks and others better suited to network larger organizations."

Each standard varies in geographical range, thus making one standard more ideal than the next depending on what it is one is trying to accomplish with a wireless network. The performance of wireless networks satisfies a variety of applications such as voice and video. The use of this technology also gives room for expansions, such as from 2G to 3G and, 4G and 5G technologies, which stand for the fourth and fifth generation of cell phone mobile communications standards. As wireless networking has become commonplace, sophistication increases through configuration of network hardware and software, and greater capacity to send and receive larger amounts of data, faster, is achieved. Now the wireless network has been running on LTE, which is a 4G mobile communication standard. Users of an LTE network should have data speeds that are 10x faster than a 3G network.

Space is another characteristic of wireless networking. Wireless networks offer many advantages when it comes to difficult-to-wire areas trying to communicate such as across a street or river, a warehouse on the other side of the premises or buildings that are physically separated but operate as one. Wireless networks allow for users to designate a certain space which the network will be able to communicate with other devices through that network. Space is also created in homes as a result of eliminating clutters of wiring. This technology allows for an alternative to installing physical network mediums such as TPs, coaxes, or fiber-optics, which can also be expensive.

For homeowners, wireless technology is an effective option compared to Ethernet for sharing printers, scanners, and high-speed Internet connections. WLANs help save the cost of installation of cable mediums, save time from physical installation, and also creates mobility for devices connected to the network. Wireless networks are simple and require as few as one single wireless access point connected directly to the Internet via a router.

The telecommunications network at the physical layer also consists of many interconnected wireline network elements (NEs). These NEs can be stand-alone systems or products that are either supplied by a single manufacturer or are assembled by the service provider (user) or system integrator with parts from several different manufacturers. Wireless NEs are the products and devices used by a wireless carrier to provide support for the backhaul network as well as a mobile switching center (MSC). Reliable wireless service depends on the network elements at the physical layer to be protected against all operational environments and applications (see GR-3171, ''Generic Requirements for Network Elements Used in Wireless Networks – Physical Layer Criteria'').