Western Ukraine or West Ukraine ( uk|Західна Україна or uk|Захід України) is a geographical and historical relative term used in reference to the western territories of Ukraine. The form Ukrainian West is used but not emphasized often. The territory includes several historical regions such as ''Transcarpathia'', ''Halychyna'' including Pokuttia (eastern portion of the Eastern Galicia), most of ''Volhynia'', northern ''Bukovina'' as well as western ''Podolia''. The main historical areas that the territory covers are Volhynia and Russia, today more known as Galicia or, locally, Halychyna. Russia in the Ukrainian West has nothing to do with the country to the east from Ukraine. The control over the territory the Muscovite Russia obtained only in the 20th century, particularly, during World War II when it was known as the Soviet Union and along with the Nazi Germany participated in another partitioning of Poland. Less often the Ukrainian West includes areas of eastern Volhynia, Podolia, and small portion of northern Bessarabia (eastern part of Chernivtsi Oblast). The city of Lviv is the main cultural center of the region and historical capital of kingdom and palatinatus of Russia. Other important cities are Buchach, Chernivtsi, Drohobych, Halych (hence - Halychyna), Ivano-Frankivsk, Khotyn, Lutsk, Mukacheve, Rivne, Ternopil, Uzhhorod and others. Strong association with the Rusyn or the Ruthenian nation in the region existed until the World War II, including Galician Rusyns and Carpathian Rusyns. The Ukrainian West is not an administrative category within Ukraine. It is used mainly in the context of European history pertaining to the 20th-century wars and the ensuing period of annexations. Galicia (Eastern Europe) and the Carpathian Ruthenia were part of the Austro-Hungarian Empire before its collapse after World War I. At the onset of World War II the part of Polish territory was incorporated into the Ukrainian Soviet Socialist Republic (УРСР), following elections held on October 22, 1939, and the Carpathian Ruthenia (today Zakarpattia) after World War II. Its historical background makes Western Ukraine uniquely different from the rest of the country, and contributes to its distinctive character today. 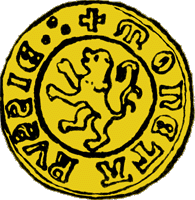 Following the 14th century Galicia–Volhynia Wars, most of the region was transferred to the Crown of Poland under Casimir the Great, who received the lands legally by a downward agreement in 1340 after his nephew's death, Bolesław-Jerzy II. The eastern Volhynia and most of Podolia was added to the territory of the Grand Duchy of Lithuania by Lubart. The territory of Bukovina was part of Moldavia since its formation by voivode Dragoș, who was departed by the Kingdom of Hungary, during the 14th century. After the 18th century partitions of Poland (Polish–Lithuanian Commonwealth), the territory was split between the Habsburg Monarchy and the Russian Empire. The modern south-western part of Western Ukraine became the Kingdom of Galicia and Lodomeria, after 1804 crownland of the Austrian Empire. Its northern flank with the cities of Lutsk and Rivne was acquired in 1795 by Imperial Russia following the third and final partition of Poland. Throughout its existence Russian Poland was marred with violence and intimidation, beginning with the 1794 massacres, imperial land-theft and the deportations of the November and January Uprisings. By contrast, the Austrian Partition with its Sejm of the Land in the cities of Lviv and Stanyslaviv (Ivano-Frankivsk) was freer politically perhaps because it had a lot less to offer economically. Imperial Austria did not persecute Ukrainian organizations. In later years, Austria-Hungary de facto encouraged the existence of Ukrainian political organizations in order to counterbalance the influence of Polish culture in Galicia. The southern half of West Ukraine remained under Austrian administration until the collapse of the House of Habsburg at the end of World War One in 1918. In 1775, following the Russo-Turkish Treaty of Küçük Kaynarca, Moldavia lost to the Habsburg Monarchy its northwestern part, which became known as Bukovina, and remained under Austrian administration until 1918.

Following the defeat of Ukrainian People's Republic (1918) in the Ukrainian–Soviet War of 1921, Western Ukraine was partitioned by the Treaty of Riga between Poland, Czechoslovakia, Hungary, and the Soviet Russia acting on behalf of the Soviet Belarus and the Ukrainian Soviet Socialist Republic with capital in Kharkiv. The Soviet Union gained control over the entire territory of the short-lived Ukrainian People's Republic east of the border with Poland. In the Interbellum most of the territory of today's Western Ukraine belonged to the Second Polish Republic. Territories such as Bukovina and Carpatho-Ukraine belonged to Romania and Czechoslovakia, respectively. At the onset of Operation Barbarossa by Nazi Germany, the region became occupied by Nazi Germany in 1941. The southern half of West Ukraine was incorporated into the semi-colonial ''Distrikt Galizien'' (District of Galicia) created on August 1, 1941 (Document No. 1997-PS of July 17, 1941 by Adolf Hitler) with headquarters in Chełm Lubelski, bordering district of General Government to the west. Its northern part (Volhynia) was assigned to the ''Reichskommissariat Ukraine'' formed in September 1941. Notably, the District of Galicia was a separate administrative unit from the actual ''Reichskommissariat Ukraine'' with capital in Rivne. They were not connected with each other politically for Nazi Germans. The division was administrative and conditional, in his book "From Putyvl to the Carpathian" Sydir Kovpak never mentioned about any border-like divisions. Bukovina was controlled by the pro-Nazi Kingdom of Romania. After the defeat of Germany in World War II, in May 1945 the Soviet Union incorporated all territories of current Western Ukraine into the Ukrainian SSR.