A waterway is any navigable body of water. Broad distinctions are useful to avoid ambiguity, and disambiguation will be of varying importance depending on the nuance of the equivalent word in other languages. A first distinction is necessary between maritime shipping routes and waterways used by inland water craft. Maritime shipping routes cross oceans and seas, and some lakes, where navigability is assumed, and no engineering is required, except to provide the draft for deep-sea shipping to approach seaports ( channels), or to provide a short cut across an isthmus; this is the function of ship canals. Dredged channels in the sea are not usually described as waterways. There is an exception to this initial distinction, essentially for legal purposes, see under
international waters

. Where seaports are located inland, they are approached through a waterway that could be termed "inland" but in practice is generally referred to as a "maritime waterway" (examples Seine Maritime, Loire Maritime, Seeschiffahrtsstraße Elbe). The term "inland waterway" refers to navigable rivers and canals designed to be used by inland waterway craft only, implicitly of much smaller dimensions than seagoing ships. In order for a waterway to be navigable, it must meet several criteria: * it must be deep enough to accommodate vessels loading to the design draft; * it must be wide enough to allow passage of the vessels with the design width or beam; * it must be free of obstacles to navigation such as
waterfall

s and rapids, or offer a way around them (such as
canal lock

s or boat lifts); * its current must be mild enough to allow vessels to make headway upstream without undue difficulty; * the wave height (on lakes) must not exceed the value for which the class of vessel is designed. Vessels using waterways vary from small
animal Animals (also called Metazoa) are multicellular eukaryotic organisms that form the Kingdom (biology), biological kingdom Animalia. With few exceptions, animals Heterotroph, consume organic material, Cellular respiration#Aerobic respiration, ...
-drawn barges to immense ocean tankers and ocean liners, such as
cruise ship Cruise ships are large passenger ships used mainly for vacationing. Unlike ocean liners, which are used for transport, they typically embark on round-trip voyages to various ports-of-call, where passengers may go on Tourism, tours known as "sho ...
s.

Waterways have been an important part of human activity since prehistoric times and navigability has allowed watercraft and canals to pass through every body of water. The Grand Canal (China), Grand Canal, a UNESCO World Heritage Site, the oldest known waterway system in the world, is considered to be the world's largest and most extensive civil project of engineering.

Example of classification of inland waterways

The European Conference of Ministers of Transport established in 1953 a classification of waterways that was later expanded to take into account the development of push-towing. Europe is a continent with a great variety of waterway characteristics, which makes this classification valuable to appreciate the different classes of waterway. There is also a remarkable variety of waterway characteristics in many countries of Asia, but there has not been any equivalent international drive for uniformity. This classification is provided by the UN Economic Commission for Europe, Inland Transport Committee, Working Party on Inland Water Transport. A low resolution version of that map is shown here. 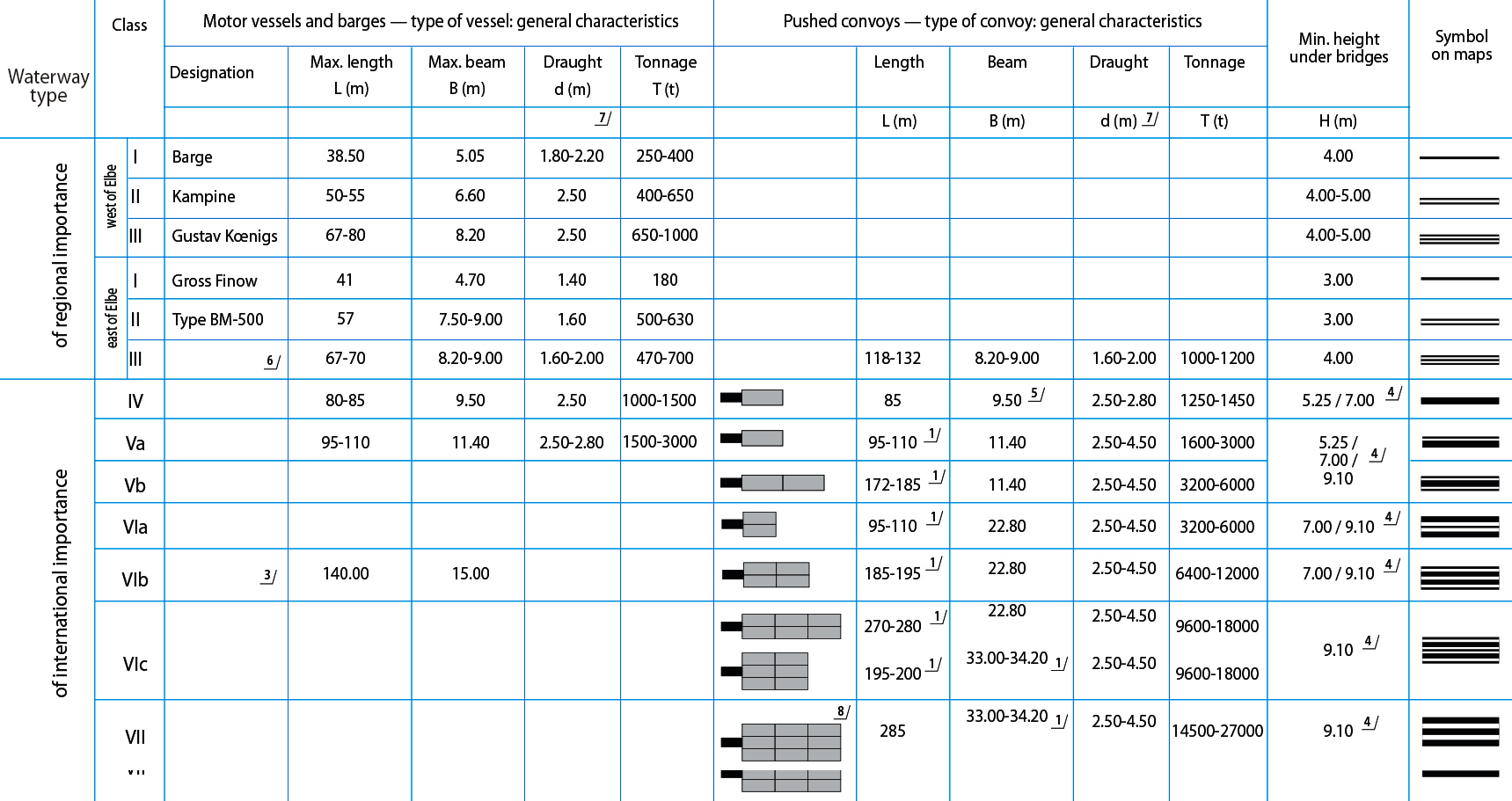 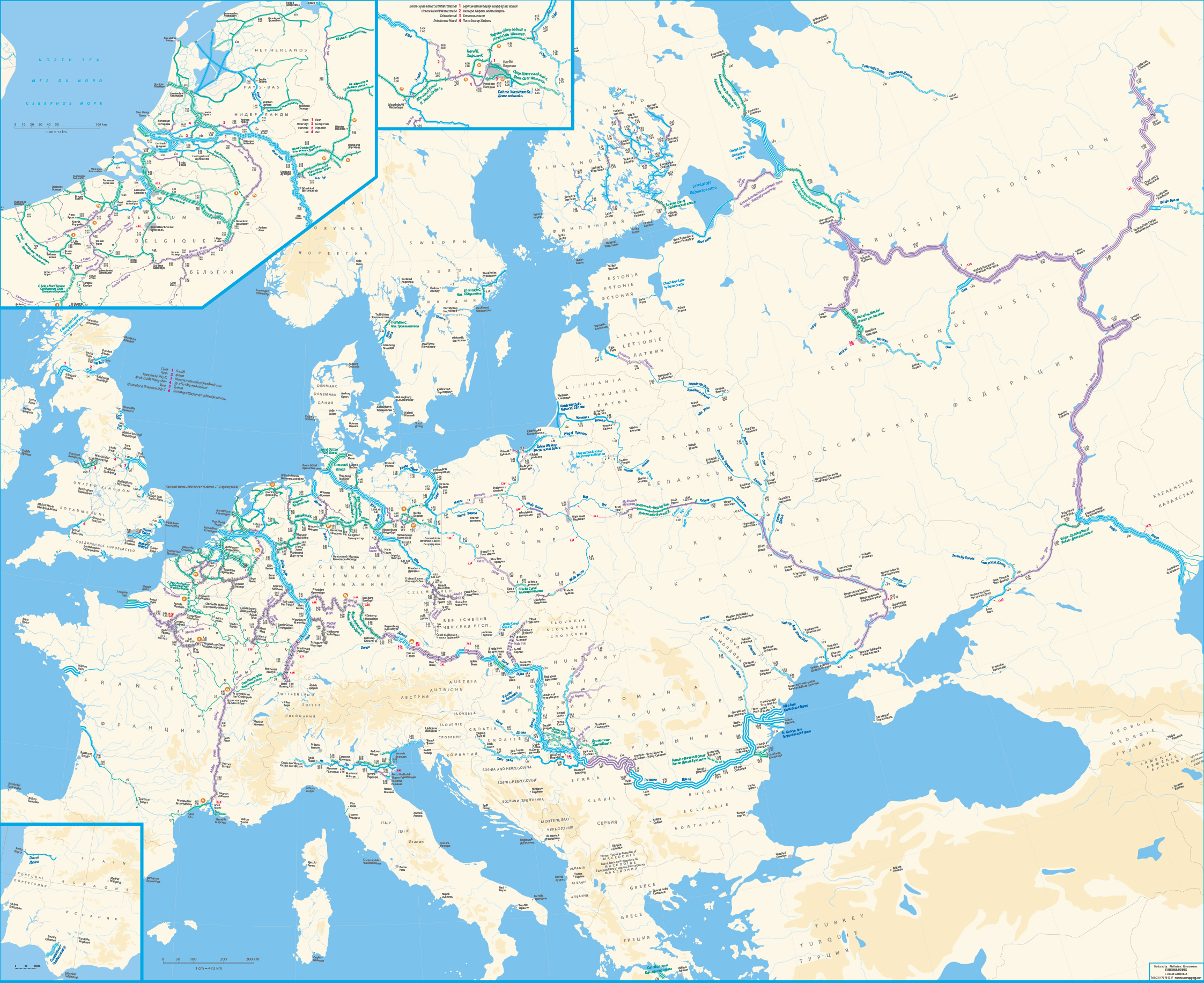 
Blue Book on European inland waterways
- access to the Blue Book database. The objective of the “Blue Book” is to establish an inventory of existing and envisaged standards and parameters of "E-waterways" and ports in Europe and to show, on an internationally comparable basis, the current inland navigation infrastructure parameters prescribed on the Agreement on Main Inland Waterways of International Importance
Waterscape - Britain's official guide to canals, rivers and lakes
{{Authority control Waterways, Bodies of water