Vox (
Latin Latin (, or , ) is a classical language belonging to the Italic languages, Italic branch of the Indo-European languages. Latin was originally spoken in the area around Rome, known as Latium. Through the power of the Roman Republic, it became the ...
for "voice", often stylized as VOX; ) is a far-right
political party A political party is an organization that coordinates candidates to compete in a country's elections. It is common for the members of a political party to have similar ideas about politics, and parties may promote specific political ideology, ...
in
Spain , * gl, Reino de España, * oc, Reiaume d'Espanha, , , image_flag = Bandera de España.svg , image_coat = Escudo de España (mazonado).svg , national_motto = , national_anthem = , image_map = , map_caption = , image_ ...
. Founded in 2013, the party is led by party president Santiago Abascal and secretary general Javier Ortega Smith. The party entered the Spanish parliament for the first time in the April 2019 Spanish general election, April 2019 general election, having become the country's third political force after the November 2019 Spanish general election that same year, in which it secured 3.6 million votes and 52 seats in the Congress of Deputies. 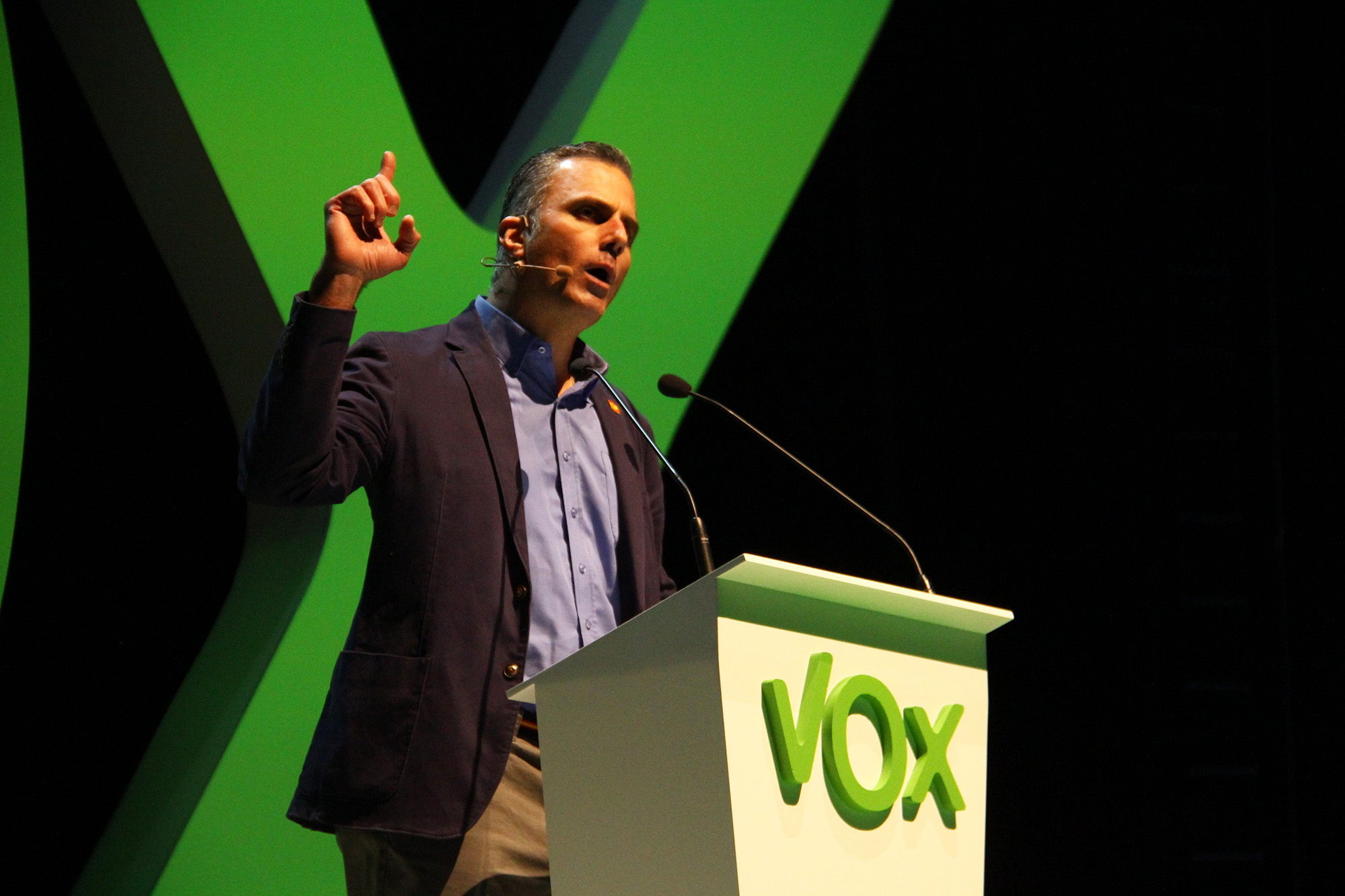 Vox was founded on 17 December 2013, and publicly launched at a press conference in Madrid on 16 January 2014 as a split from the People's Party. This schism was interpreted as an offshoot of "neoconservative" or "social conservatism, social conservative" PP party members. The party platform sought to rewrite the constitution to abolish regional autonomy and parliaments. Several of their promoters (for example: Alejo Vidal-Quadras Roca, Alejo Vidal-Quadras, José Antonio Ortega Lara or Santiago Abascal) had been members of the platform "reconversion.es" that issued a manifesto in 2012 vouching for the recentralization of the State. Vidal-Quadras was proclaimed as the first chairman in March 2014. The initial funding, totalling nearly 972,000 euros, came from individual money transfers by supporters of the People's Mujahedin of Iran (MEK). Vox ran for the first time in the 2014 European Parliament election in Spain, 2014 European elections but narrowly failed to win a seat in the European Parliament. In September 2014 the party elected Santiago Abascal, one of the founders, as new President, and Iván Espinosa de los Monteros, also a founder, as General Secretary. Eleven members of the National Executive Committee were also elected. The party participated in the 2015 Spanish general election, 2015 and the 2016 Spanish general election, 2016 elections, but did not do well, scoring 0.23% and 0.20% of votes respectively. After the 2017 Catalan independence referendum, Catalan referendum of 2017 and the start of a Spanish constitutional crisis, Vox opted to not participate in the 2017 Catalan regional election, Catalan regional elections of 2017. After the Catalan declaration of independence, the party sued the Parliament of Catalonia and several independentist politicians the number of its members increased by 20% in forty days. On 10 September 2018 Vox enlisted an independent legislator in the Assembly of Extremadura, regional parliament of Extremadura (who had dropped out of the PP parliamentary group) as party member. On 2 December 2018 they won 12 parliamentary seats in the 2018 Andalusian regional election, Andalusian regional election, entering a Parliament of Andalusia, regional parliament for the first time. It supported the coalition regional government by Ciudadanos and the Popular Party. With this result, Vox was also given a first seat in the Senate of Spain, which was taken by Francisco José Alcaraz. The party obtained 10.26% of votes in the April 2019 Spanish general election, April 2019 general election, electing 24 Deputies and entering the Congress of Deputies for the first time in its history. Later, the party entered for its first time in the European Parliament with 6.2% of the votes and three Member of the European Parliament, Eurodeputies, which after Brexit became four. After this election, the party joined the European Conservatives and Reformists group and the Alliance of Conservatives and Reformists in Europe. In the November 2019 Spanish general election, second general election of the year in November, Vox came third and increased its number of deputies from 24 to 52. It was the most-voted party in the Region of Murcia and the autonomous city of Ceuta. In October 2020, the Vox's parliamentary group at the Congress of Deputies tabled a 2020 vote of no confidence in the government of Pedro Sánchez, motion of no confidence against the current Prime Minister Pedro Sánchez, bringing Santiago Abascal as alternative candidate. The motion failed to track any support among the rest of parliamentary forces, gathering 52 'yes' votes (those of Vox legislators) and 298 'no' votes (the rest of the chamber). In face of the 2020 United States presidential election Vox fully supported President of the United States, President Donald Trump's candidacy, even tweeting from its official account that Joe Biden was the preferred candidate of "El País, Podemos (Spanish political party), Podemos, Arnaldo Otegi, Otegi, Nicolás Maduro, Maduro, China, Iran and pedophiles", which according to the international news agency EFE was echoing QAnon conspiracy theories. Vox took part in the Conservative Political Action Conference, 2021 CPAC conference and refused to acknowledge Biden's victory.

Vox has been described as a far-right party within the subset of the radical right (Europe), radical-right family. Unlike other European radical right parties, its discourse relies relatively less on populism and more on nationalism. It mixes nationalism and Nativism (politics), nativism with an authoritarian vision of society, opposing what the party terms as "radical left-wing feminism" favouring "traditional" gender norms instead. Its economic agenda has been described as "neoliberal". Starting with a focus in economically liberal stances and Political unitarism, recentralization proposals, the focus of their message shifted towards stances compatible with European right-wing populism, endorsing anti-Islam as well as criticism of multiculturalism. Their view of European Union is that of a Euroscepticism, arguing that Spain should make no sovereignty concessions to the EU, because they consider Spanish sovereignty to reside in the Spanish nation alone. They propose to eliminate Spain's Autonomous communities of Spain, autonomous communities. In addition, they seek the return of Gibraltar to full Spanish sovereignty. Vox is considered antifeminist, and wants to repeal the gender violence law, which they see as "discriminant against one of the sexes" and replace it with a "family violence law that will afford the same protection to the elderly, men, women and children who suffer from abuse". The party pleads for the closure of fundamentalist mosques as well as the arrest and expulsion of extremist imams. Vox has openly called for the deportation of tens of thousands of Muslims from Spain. In 2019, the party's leader demanded a Reconquista or reconquest of Spain, explicitly referencing a new expulsion of Muslim immigrants from the country. According to Xavier Casals, the warlike ultranationalism in Vox, unifying part of its ideology up to this point, is identified by the party with a palingenetic and biological vision of the country, the so-called "''España Viva''", but also with a Catholic-inspired culture. According to Casals, the ideological roots of the Vox's ultranationalism lie in the ''incondicionalismo'' ("unconditionalism"), the nationalist discourse based on the "fear of amputation of the homeland" coined in the 19th century in Captaincy General of Cuba, Colonial Cuba against Cuban separatism and also ''autonomist'' concessions (replicated in Catalonia in the 1910s). Their specific brand of Spanish nationalism is linked to the unconditional support to the Law enforcement in Spain, State Security Forces and Corps. The party discourse has also revived the myth of the ''Antiespaña'' ("Anti-Spain"), an umbrella term created in the 1930s by the domestic ultranationalist forces to designate the (inner) "Enemies of Spain", creating a simplistic ''España viva/Antiespaña'' duality that comes handy for the communication in brief messages characteristic of social media. Regarding the external projection of their discourse, the party has reanimated the concept of "Hispanidad"; party leader Abascal has stated that an immigrant coming from a "brotherly Hispano-American country" is not comparable to the immigration coming from "Islamic countries". According to Guillermo Fernández Vázquez, Vox's discourse, which he described as "''economically'' anti-statist and neoliberal" as well as "''morally'' authoritarian", is similar to Jörg Haider's FPÖ or Jean Marie Le Pen's National Front (France), National Front from the 1980s, thus likening the emergence of the party to an archaic stage of current radical right parties, more worried about the need to modernize their image than Vox; the later's approach to cultural issues would be in line with old school Spanish nationalist parties, restricting the scope of "culture" to "language and tradition". While Vox openly endorses the State of Israel, the party has appealed to conspiracy theories invoking the figure of Jewish philanthropist George Soros as mastermind behind Catalan separatism and the alleged "Islamization" of Europe. Vox has also featured some former neo-Nazis in party cadres and lists; some of them have been expelled from the party or have resigned. In November 2018, during a party event in Murcia, the party leader Santiago Abascal defined his party as "antifascist, antinazi and anticommunist". While the party platform only espouses proposals against Islamic fundamentalism, the statements in the public sphere by party figures espouse a wider Islamophobia, helping to underpin, according to Casals, their discourse against Maghrebi immigration, the development of a closer bond to Catholicism, as well as their anti-feminist message (undermining the importance of feminist struggle in the advance of liberties of women by means of linking the latter to a culture with "Christian foundations").

*History of the far-right in Spain