Vaccination is the administration of a vaccine to help the immune system develop protection from a disease. Vaccines contain a microorganism or virus in a weakened, live or killed state, or proteins or toxins from the organism. In stimulating the body's adaptive immunity, they help prevent sickness from an infectious disease. When a sufficiently large percentage of a population has been vaccinated, herd immunity results. Herd immunity protects those who may be immunocompromised and cannot get a vaccine because even a weakened version would harm them. The effectiveness of vaccination has been widely studied and verified. Vaccination is the most effective method of preventing infectious diseases; widespread immunity due to vaccination is largely responsible for the worldwide eradication of smallpox and the elimination of diseases such as polio and tetanus from much of the world. However, some diseases, such as measles outbreaks in America, have seen rising cases due to relatively low vaccination rates in the 2010s - attributed, in part, to vaccine hesitancy. The first disease people tried to prevent by inoculation was most likely smallpox, with the first recorded use of variolation occurring in the 16th century in China. It was also the first disease for which a vaccine was produced. Although at least six people had used the same principles years earlier, the smallpox vaccine was invented in 1796 by English physician Edward Jenner. He was the first to publish evidence that it was effective and to provide advice on its production. Louis Pasteur furthered the concept through his work in microbiology. The immunization was called ''vaccination'' because it was derived from a virus affecting cows ( la|vacca 'cow'). Smallpox was a contagious and deadly disease, causing the deaths of 20–60% of infected adults and over 80% of infected children. When smallpox was finally eradicated in 1979, it had already killed an estimated 300–500 million people in the 20th century. ''Vaccination'' and ''immunization'' have a similar meaning in everyday language. This is distinct from inoculation, which uses unweakened live pathogens. Vaccination efforts have been met with some reluctance on scientific, ethical, political, medical safety, and religious grounds, although no major religions oppose vaccination, and some consider it an obligation due to the potential to save lives. In the United States, people may receive compensation for alleged injuries under the National Vaccine Injury Compensation Program. Early success brought widespread acceptance, and mass vaccination campaigns have greatly reduced the incidence of many diseases in numerous geographic regions. 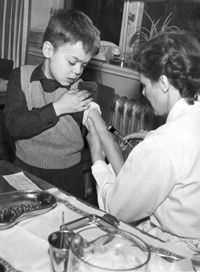 Vaccines are a way of artificially activating the immune system to protect against infectious disease. The activation occurs through priming the immune system with an immunogen. Stimulating immune responses with an infectious agent is known as ''immunization''. Vaccination includes various ways of administering immunogens. Most vaccines are administered before a patient has contracted a disease to help increase future protection. However, some vaccines are administered after the patient already has contracted a disease. Vaccines given after exposure to smallpox are reported to offer some protection from disease or may reduce the severity of disease. The first rabies immunization was given by Louis Pasteur to a child after he was bitten by a rabid dog. Since its discovery, the rabies vaccine has been proven effective in preventing rabies in humans when administered several times over 14 days along with rabies immune globulin and wound care. Other examples include experimental AIDS, cancer and Alzheimer's disease vaccines. Such immunizations aim to trigger an immune response more rapidly and with less harm than natural infection. Most vaccines are given by injection as they are not absorbed reliably through the intestines. Live attenuated polio, rotavirus, some typhoid, and some cholera vaccines are given orally to produce immunity in the bowel. While vaccination provides a lasting effect, it usually takes several weeks to develop. This differs from passive immunity (the transfer of antibodies, such as in breastfeeding), which has immediate effect. A vaccine failure is when an organism contracts a disease in spite of being vaccinated against it. Primary vaccine failure occurs when an organism's immune system does not produce antibodies when first vaccinated. Vaccines can fail when several series are given and fail to produce an immune response. The term "vaccine failure" does not necessarily imply that the vaccine is defective. Most vaccine failures are simply from individual variations in immune response.

The term inoculation is often used interchangeably with vaccination. However, the terms are not synonymous. Dr Byron Plant explains: "Vaccination is the more commonly used term, which actually consists of a 'safe' injection of a sample taken from a cow suffering from cowpox... Inoculation, a practice probably as old as the disease itself, is the injection of the variola virus taken from a pustule or scab of a smallpox sufferer into the superficial layers of the skin, commonly on the upper arm of the subject. Often inoculation was done 'arm-to-arm' or, less effectively, 'scab-to-arm'..." Inoculation oftentimes caused the patient to become infected with smallpox, and in some cases the infection turned into a severe case. Confirmed applications of inoculation for smallpox happened in China in the 1550s. Vaccinations began in the 18th century with the work of Edward Jenner and the smallpox vaccine.

Just like any medication or procedure, no vaccine can be 100% safe or effective for everyone because each person's body can react differently. While minor side effects, such as soreness or low grade fever, are relatively common, serious side effects are very rare and occur in about 1 out of every 100,000 vaccinations and typically involve allergic reactions that can cause hives or difficulty breathing. However, vaccines are the safest they ever have been in history and each vaccine undergoes rigorous clinical trials to ensure their safety and efficacy before FDA approval. Prior to human testing, vaccines are run through computer algorithms to model how they will interact with the immune system and are tested on cells in a culture. During the next round of testing, researchers study vaccines in animals, including mice, rabbits, guinea pigs, and monkeys. Vaccines that pass each of these stages of testing are then approved by the FDA to start a three-phase series of human testing, advancing to higher phases only if they are deemed safe and effective at the previous phase. The people in these trials participate voluntarily and are required to prove they understand the purpose of the study and the potential risks. During phase I trials, a vaccine is tested in a group of about 20 people with the primary goal of assessing the vaccine's safety. Phase II trials expand the testing to include 50 to several hundred people. During this stage, the vaccine's safety continues to be evaluated and researchers also gather data on the effectiveness and the ideal dose of the vaccine. Vaccines determined to be safe and efficacious then advance to phase III trials, which focuses on the efficacy of the vaccine in hundreds to thousands of volunteers. This phase can take several years to complete and researchers use this opportunity to compare the vaccinated volunteers to those who have not been vaccinated to highlight any true reactions to the vaccine that occur. If a vaccine passes all of the phases of testing, the manufacturer can then apply for licensure of the vaccine through the FDA. Before the FDA approves use in the general public, they extensively review the results to the clinical trials, safety tests, purity tests, and manufacturing methods and establish that the manufacturer itself is up to government standards in many other areas. However, safety testing of the vaccines never ends. After FDA approval, the FDA continues to monitor the manufacturing protocols, batch purity, and the manufacturing facility itself. Additionally, most vaccines also undergo phase IV trials, which monitors the safety and efficacy of vaccines in tens of thousands of people, or more, across many years. This allows for delayed or very rare reactions to be detected and evaluated.

The Centers for Disease Control and Prevention (CDC) has compiled a list of vaccines and their possible side effects. The risk of side effects varies from one vaccine to the next, but below are examples of side effects and their approximate rate of occurrence with the diphtheria, tetanus, and acellular pertussis (DTaP) vaccine, a common childhood vaccine. Mild side effects (common) * Mild fever (1 in 4) * Redness, soreness, swelling at the injection site (1 in 4) * Fatigue, poor appetite (1 in 10) * Vomiting (1 in 50) Moderate side effects (uncommon) * Seizure (1 in 14,000) * High fever (over 105 °F) (1 in 16,000) Severe side effects (rare) * Serious allergic reaction (1 in 1,000,000) * Other severe problems including long-term seizure, coma, brain damage have been reported, but are so rare that it is not possible to tell if they are from the vaccine or not. Certain vaccines have had adverse outcomes identified after being used in mass vaccination programs. In 1976 in the United States, a mass vaccination program swine flu vaccine was discontinued after cases of Guillain–Barré syndrome. William Foege of the CDC estimated that the incidence of Guillain-Barré was four times higher in vaccinated people than in those not receiving the swine flu vaccine. Dengvaxia, the only approved vaccine for Dengue fever, was found to increase the risk of hospitalization for Dengue fever by 1.58 times in children of 9 years or younger, resulting in the suspension of a mass vaccination program in the Philippines in 2017. Pandemrix a vaccine for the H1N1 pandemic of 2009 given to around 31 million people was found to have a higher level of adverse events than alternative vaccines resulting in legal action. In a response to the narcolepsy reports following immunization with Pandemrix, the CDC carried out a population-based study and found the FDA-approved 2009 H1N1 flu shots were not associated with an increased risk for the neurological disorder.

The ingredients of vaccines can vary greatly from one to the next and no two vaccines are the same. The CDC has compiled a list of vaccines and their ingredients that is readily accessible on their website.

Aluminium is an adjuvant ingredient in some vaccines. An adjuvant is a type of ingredient that is used to help the body's immune system create a stronger immune response after receiving the vaccination. Aluminium is in a salt form (the ionic version of an element) and is used in the following compounds: aluminium hydroxide, aluminium phosphate, and aluminium potassium sulfate. For a given element, the ion form has different properties from the elemental form. Although it is possible to have aluminium toxicity, aluminium salts have been used effectively and safely since the 1930s when they were first used with the diphtheria and tetanus vaccines. Although there is a small increase in the chance of having a local reaction to a vaccine with an aluminium salt (redness, soreness, and swelling), there is no increased risk of any serious reactions.

Certain vaccines contain a compound called thimerosal, which is an organic compound that contains mercury. Mercury is commonly found in two forms that differ by the number of carbon groups in its chemical structure. Methylmercury (one carbon group) is found in fish and is the form that people usually ingest, while ethylmercury (two carbon groups) is the form that is in thimerosal. Although the two have similar chemical compounds, they do not have the same chemical properties and interact with the human body differently. Ethylmercury is cleared from the body faster than methylmercury and is less likely to cause toxic effects. Thimerosal is used to prevent the growth of bacteria and fungi in vials that contain more than one dose of a vaccine. This helps reduce the risk of potential infections and or serious illness that could occur from contamination of a vaccine vial. Although there is a small increase in risk of injection site redness and swelling with vaccines containing thimerosal, there is no increased risk of serious harm, including autism. Even though evidence supports the safety and efficacy of thimerosal in vaccines, thimerosal was removed from childhood vaccines in the United States in 2001 as a precaution.

The administration protocols, efficacy, and adverse events of vaccines are monitored by organizations of the federal government, including the CDC and FDA, and independent agencies are constantly re-evaluating vaccine practices.