(JD), Master of Laws (LLM), and Doctor of Juridical Science (SJD) degree programs. Michigan Law School consistently ranks among the highest-rated law schools in the United States and the world. In the 2020 ''U.S. News'' ranking, Michigan Law is ranked 9th overall. Notable alumni include U.S. Supreme Court Justices Frank Murphy, William Rufus Day, and George Sutherland, as well as a number of heads of state and corporate executives. Approximately 98% of class of 2019 graduates were employed within ten months of graduation; its bar passage rate in 2018 was 93.8%. Michigan Law has placed 41 of its alumni on United States Circuit Courts, over 100 of its graduates on federal trial courts, and 36 of its graduates on the Michigan Supreme Court, including 16 who served as Chief Justice. More than 170 Michigan law graduates have served in the United States Congress, including 33 United States Senators and more than 150 Congressional representatives. Additionally, numerous graduates have served as List of University of Michigan legislator alumni, state legislators. The school has an enrollment of about 1020 as well as 81 full-time faculty members (60 tenured and tenure-track and 21 in clinical and legal practice).

The Law School was founded in 1859, and quickly rose to national prominence. By 1870, Michigan was the largest law school in the country. In 1870, Gabriel Franklin Hargo graduated from Michigan as the second African American to graduate from law school in the United States. In 1871 Sarah Killgore, a Michigan Law graduate, became the first woman to both graduate from law school and be admitted to the Admission to the bar, bar. Although the law school is part of the public
University of Michigan The University of Michigan (UM, U-M, U of M, UMich, or Michigan) is a public university, public research university in Ann Arbor, Michigan. Founded in 1817 in Detroit, as the ''Catholepistemiad'', or the ''University of Michigania'', 20 years b ...
, less than 2 percent of the law school's expenses are covered by state funds. The remainder (97–98% of Michigan Law's budget) is supplied by private gifts, tuition, and endowments. In 2009, Michigan Law began a $102 million enterprise to construct a new law building that would remain loyal to the English Gothic style. The enterprise was fully funded by endowments and private gifts. 2009 also marked the school's sesquicentennial celebration. As a part of the festivities, Chief Justice of the United States, Chief Justice John Roberts visited the school and participated in the groundbreaking ceremony for the new building. The building was dedicated in 2012 and called South Hall. In December 2018, South Hall was renamed Jeffries Hall. 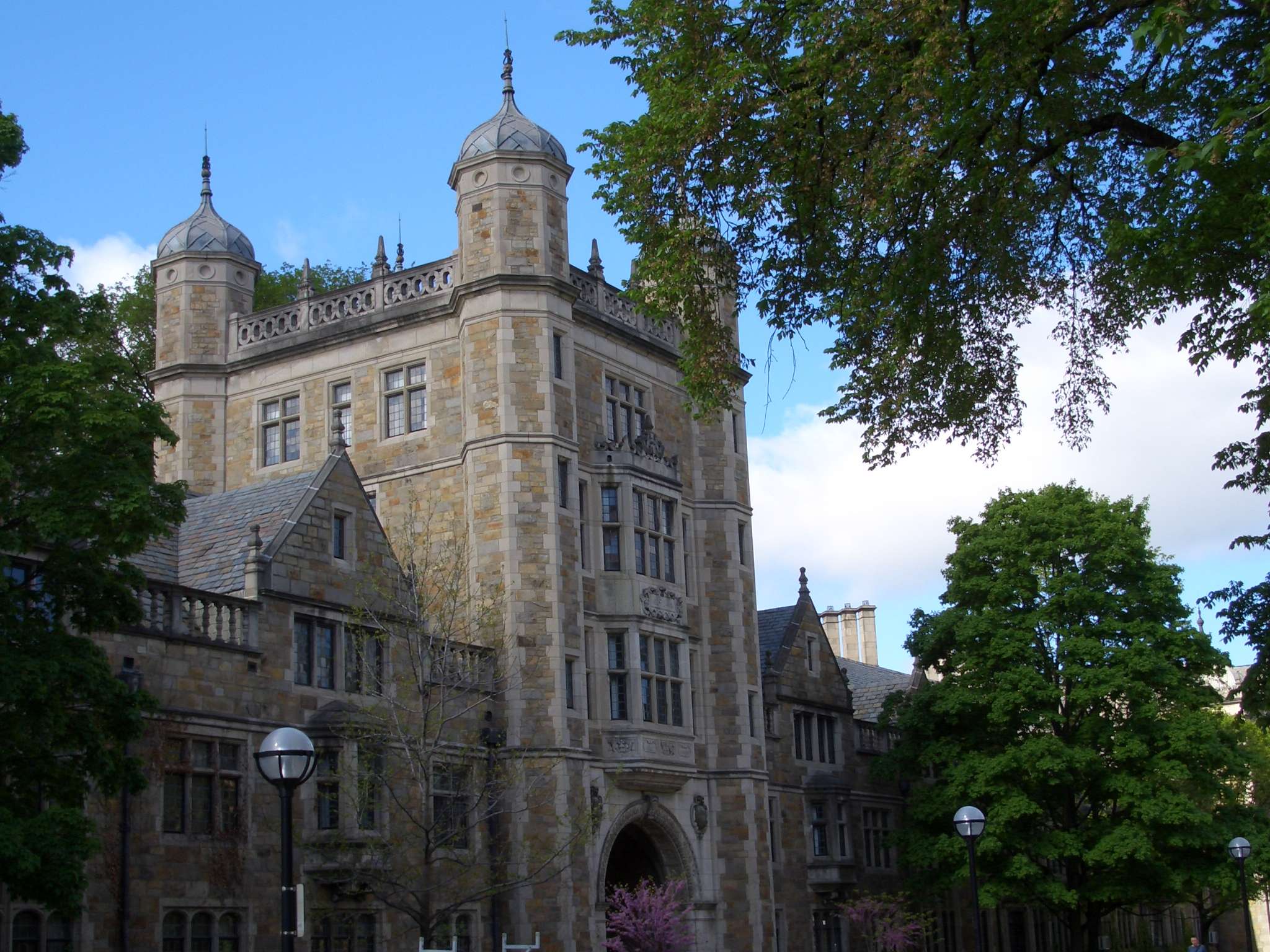 The Law Quadrangle is designed in the Collegiate Gothic architecture, Collegiate Gothic Architectural style, style. Built between 1924 and 1933 by the architectural firm York and Sawyer with funds donated by attorney and alumnus William W. Cook, the Cook Law Quadrangle comprises four buildings: *Hutchins Hall, the main academic building, named for former Dean of the Law School and President of the University, Harry Burns Hutchins *The Legal Research Building. In 2007, the University of Michigan Reading Room was named 94th on a list of "American's Favorite Buildings." The building is one of only three law buildings on the list. *John Cook Dormitory *The Lawyer's Club, providing additional dormitory rooms and a meeting space for the residents of the Quad; highlighted by a Great Lounge, and a dining room with a high-vaulted ceiling, an oak floor, and dark oak paneling. In 2012, extensive renovations of the Lawyers Club were undertaken thanks in part to a $20 million gift from Berkshire Hathaway vice-chairman Charles T. Munger, and was re-opened on August 19, 2013 for the Fall 2013 school year.

Michigan Law was ranked third in the initial ''U.S. News & World Report'' Law school rankings in the United States, law school rankings in 1987. Michigan Law is also one of the Law school rankings in the United States#Schools that rank in the top 14 (aka "T14"), "T14" law schools, schools that have consistently ranked within the top 14 law schools since U.S. News began publishing rankings. In the 2021 ''U.S. News'' ranking, Michigan Law is ranked 9th overall. The 2010 Super Lawyers rankings placed Michigan as second. Michigan Law is currently ranked 6th for Clinical Training and 6th for International Law. In a 2011 ''U.S. News'' "reputational ranking" of law schools by hiring partners at the nation's top law firms, the University of Michigan Law School ranked 4th. Michigan Law ranked 15th among U.S. law schools, tied with the Georgetown University Law Center, for the number of times its tenured faculty's published scholarship was highly cited in legal journals during the period 2010 through 2014. Admission to Michigan Law is highly selective. For the class entering in the fall of 2020, 309 students enrolled out of an applicant pool of 5,417. The 25th and 75th LSAT percentiles for the 2020 entering class were 164 and 170, respectively, with a median of 169. The 25th and 75th undergraduate GPA percentiles were 3.54 and 3.88, respectively, with a median of 3.77.

Michigan's externship program is designed to provide students with real-world legal experience and advanced research opportunities beyond what is separately available in either a classroom or a clinic. Externships are available in places such as Switzerland, South Africa, and India.

Student Funded Fellowships (SFF) is a program designed to fund Michigan Law students who accept public interest summer jobs with low pay and to help 1Ls finance the living costs associated with their summer jobs. SFF is governed by a board of law students and operates independently of the Law School. The Board elects its own officers, including two co-chairs, a treasurer, and various committee chairs. Board members head fundraising efforts throughout the year, ranging from Donate a Day's Pay (DADP), in which highly paid law firm summer associates donate a day's salary to SFF, to a grand auction in March that invites bids on various donated items, including sports tickets, meals and activities with faculty members, and art. In the late spring, Board members review applications for summer funding and select a limited number of qualified students for grants. Beginning with the summer of 2016, SFF began offering every 1L an interest-free $4000 loan for their summer expenses that is repaid on a sliding scale depending on how much money they make during their 1L and 2L summers.

Employment and cost of attendance

According to Michigan's ABA-required employment disclosures, 98% of the graduates of the Class of 2019 were employed or seeking an advanced degree. This includes the 93% of the class who had obtained jobs requiring a J.D. Of the Class of 2019, 59.3% were employed by firms of greater than 100 attorneys and 17.6% obtained clerkships. Michigan's Law School Transparency under-employment score is 5.2%, indicating the percentage of the Class of 2019 who are unemployed, pursuing an additional degree, or working in a non-professional, short-term, or part-time job nine months after graduation. The majority of Michigan Law grads work in New York, Illinois, Michigan, California, and Washington, D.C. Tuition at Michigan for the 2020–2021 academic year is $63,680 for residents of the state of Michigan and $66,680 for non-residents. The estimated cost of living for a Michigan student is $21,900. Assuming no tuition increases, a typical three-year course of study at Michigan therefore costs $256,740 (or $85,580 per year) for residents and $265,740 (or $88,580 per year) for non-residents.