Click Here for Items Related To - University of Iowa 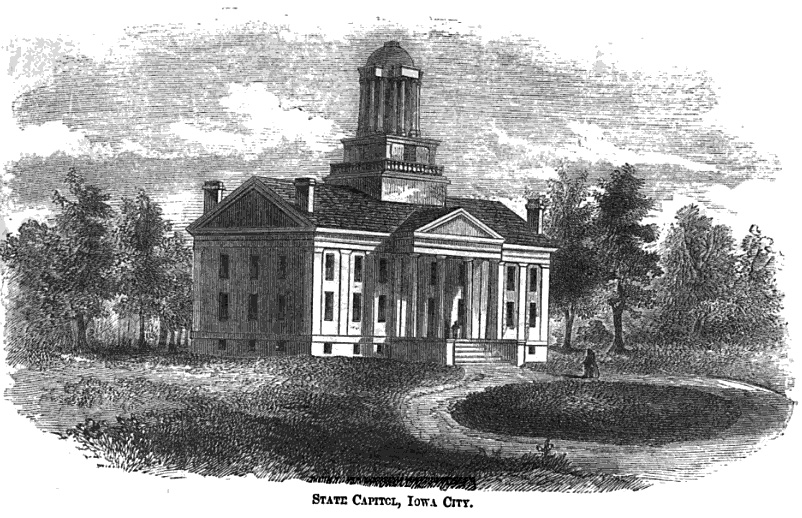 The University of Iowa was founded on February 25, 1847, just 59 days after Iowa was admitted to the Union. The Constitution of the State of Iowa refers to a State University to be established in Iowa City "without branches at any other place." The legal name of the university is the State University of Iowa, but the Board of Regents approved using "The University of Iowa" for everyday usage in October 1964. The first faculty offered instruction at the university beginning in March 1855 to students in the Old Mechanics Building, located where Seashore Hall is now. In September 1855, there were 124 students, of whom forty-one were women. The 1856–57 catalogue listed nine departments offering ancient languages, modern languages, intellectual philosophy, moral philosophy, history, natural history, mathematics, natural philosophy, and chemistry. The first president of the university was Amos Dean. The original campus consisted of the Iowa Old Capitol Building and the (4.05 hectares) of land on which it stood. Following the placing of the cornerstone July 4, 1840, the building housed the Fifth Legislative Assembly of the Territory of Iowa (December 5, 1842) and then became the first capitol building of the State of Iowa on December 28, 1846. Until that date, it had been the third capitol of the Territory of Iowa. When the capitol of Iowa was moved to Des Moines in 1857, the Old Capitol became the first permanent "home" of the University. In 1855, The university became the first public university in the United States to admit men and women on an equal basis. In addition, Iowa was the world's first university to accept creative work in theater, writing, music, and art on an equal basis with academic research. The university was one of the first institutions in America to grant a law degree to a woman (Mary B. Hickey Wilkinson, 1873), to grant a law degree to an African American (Alexander G. Clark, Jr. in 1879), and to put an African American on a varsity athletic squad (Frank Holbrook in 1895). The university offered its first doctorate in 1898. 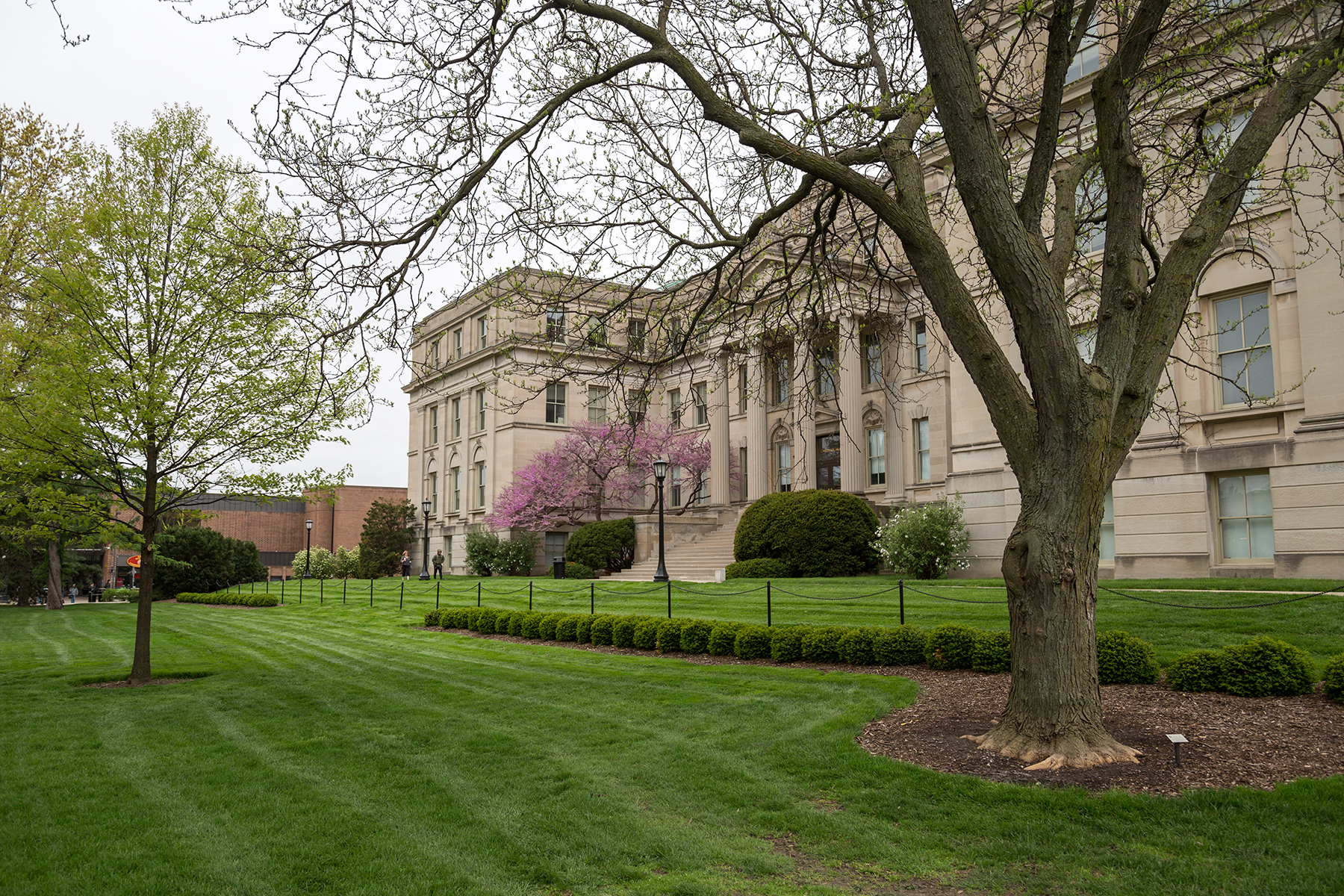 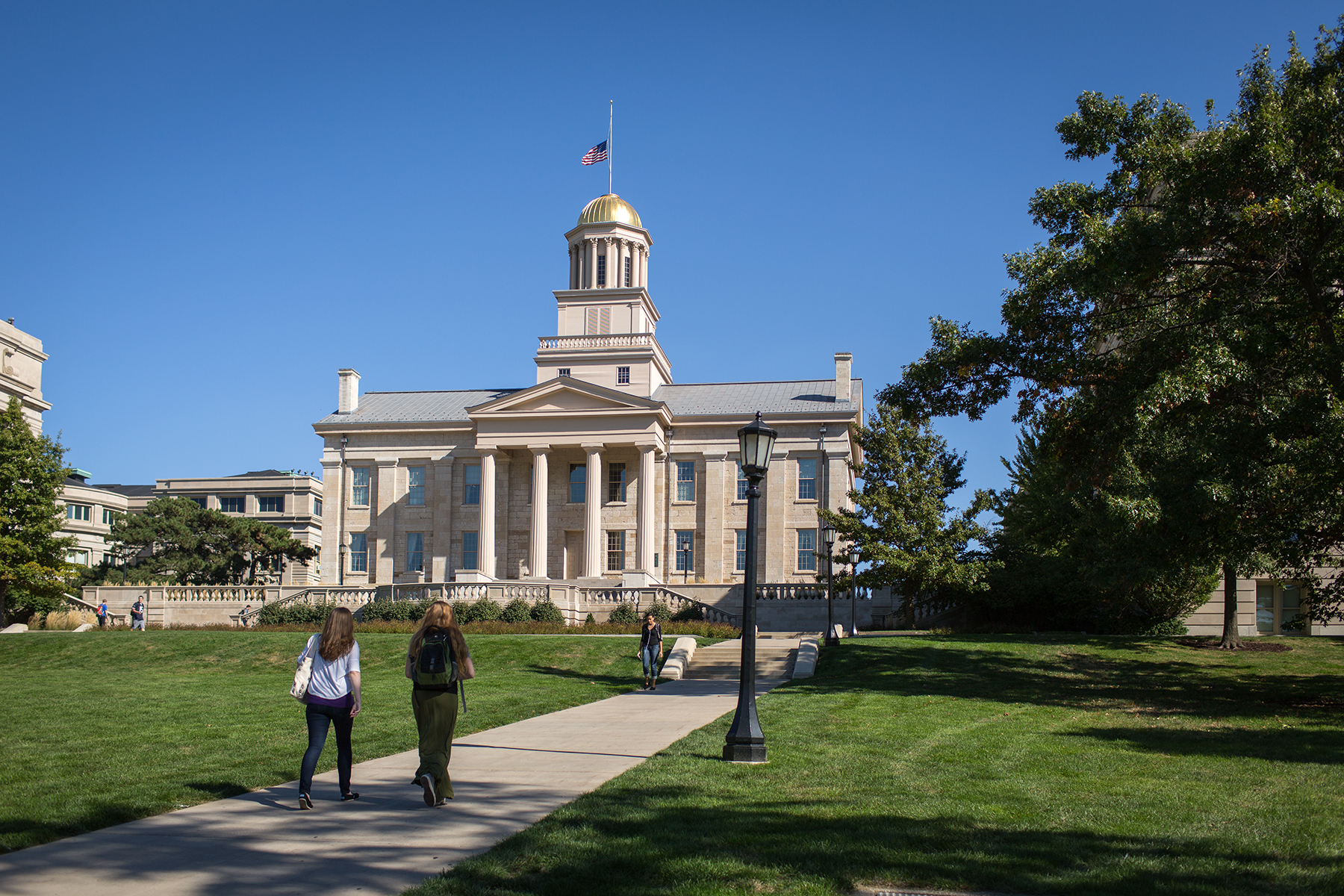 The university was the first state university to recognize the Gay, Lesbian, Bisexual, Transgender, and Allied Union (in 1970). The University of Iowa established the first law school west of the Mississippi River. It was the first university to use television in education, in 1932, and it pioneered in the field of standardized testing. Also, the University of Iowa was the first Big Ten institution to promote an African American to the position of administrative vice president. (Phillip Hubbard, promoted in 1966) Under the leadership of Carl Seashore in 1922, Iowa became the first university in the United States to accept creative projects as theses for advanced degrees. Traditionally, graduate study culminates in the writing of a scholarly thesis, but Iowa accepted creative works including a collection of poems, a musical composition, or a series of paintings to be presented to the graduate college in support of a degree. In so doing, Iowa established a creative standard in qualifying for the Master of Fine Arts degree and secured a place for writers and artists in the academy. The university's Program in Creative Writing, known worldwide as the Iowa Writers’ Workshop, was founded in 1936 with the gathering together of writers of both poetry and fiction. It was the first creative writing program in the country, and it became the prototype for more than 300 writing programs, many of which were founded by Workshop alumni. The workshop remains the most prestigious creative writing program in the country and one of the most selective graduate programs of any kind, typically admitting fewer than five percent of its applicants. A shooting took place on campus on November 1, 1991. Six people died in the shooting, including the perpetrator, and one other person was wounded. This was one of the deadliest university campus shootings in United States history. In the summer of 2008, flood waters breached the Coralville Reservoir spillway, damaging more than 20 major campus buildings. Several weeks after the flood waters receded university officials placed a preliminary estimate on flood damage at $231.75 million. Later, the university estimated that repairs would cost about $743 million. The reconstruction and renovation work took a decade, but the university has recovered and taken a number of preventive measures with the hope of avoiding a tragic repeat of the event. Later in 2008, UNESCO designated Iowa City the world's third City of Literature, making it part of the UNESCO Creative Cities Network. In 2015, the Iowa Board of Regents selected Bruce Harreld, a business consultant with limited experience in academic administration, to succeed Sally Mason as president. The regents' choice of Harreld provoked criticism and controversy on the UI campus due to his corporate background, lack of history in leading an institution of higher education, and the circumstances related to the search process. The regents said they had based their decision on the belief that Harreld could limit costs and find new sources of revenue beyond tuition in an age of declining state support for universities. 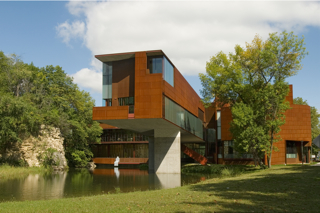 The University of Iowa's main campus is located in Iowa City. The campus is roughly bordered by Park Road and U.S. Highway 6 to the north and Dubuque and Gilbert Streets to the east. The Iowa River flows through the campus, dividing it into west and east sides. Of architectural note is the Pentacrest which comprises five major buildings—Old Capitol, Schaeffer Hall, MacLean Hall, Macbride Hall, and Jessup Hall—at the center of the University of Iowa Campus. The Pentacrest reflects the Beaux-Arts in addition to Greek Revival architectural styles and the Collegiate Gothic architecture which is dominant in sections of the campus east of the Iowa River. The Old Capitol was once the home of the state legislature and the primary government building for the State of Iowa but is now the symbolic heart of the university with a restored ceremonial legislative chamber and a museum of Iowa history. Also on the eastern side of campus are six residence halls (Burge, Daum, Stanley, Currier, Mayflower, and Catlett), the Iowa Memorial Union, the Women's Resource & Action Center, the Pappajohn Business Building, Seamans Center for the Engineering Arts and Sciences, the Lindquist Center (home of the College of Education), Phillips Hall (the foreign language building), Van Allen Hall (home to physics and astronomy), Trowbridge Hall (home to Earth & Environmental Sciences, as well as the Iowa Geological Survey), the English-Philosophy Building, the Becker Communication Building, the Adler Journalism Building, Voxman Music Building, and the buildings for biology, chemistry, and psychology. The Main Library can also be found on the east side. The Colleges of Law, Medicine, Nursing, Dentistry, Pharmacy, and Public health are on the western side of the Iowa River, along with the University of Iowa Hospitals and Clinics, and the Theatre Building. Additionally, five residence halls (Hillcrest, Slater, Rienow, Parklawn, and Petersen), Kinnick Stadium, and Carver-Hawkeye Arena are located on the west campus. The campus is home to several museums, including the University of Iowa Museum of Art, the Museum of Natural History, the Old Capitol Museum, the Medical Museum, the Athletic Hall of Fame and Museum, and Project Art at the University Hospitals and Clinics. A flood of the Iowa River in 2008 had a major impact on several campus buildings, forcing many to temporarily or permanently close. The Iowa Memorial Union was closed for some time, while its lower level was renovated. The arts campus, which included Hancher Auditorium, Voxman Music Building, Clapp Recital Hall, and the Theatre Building, sustained significant damage. Hancher Auditorium was rebuilt near its current site on the West bank of the Iowa River, and Voxman Music Hall was constructed adjacent to downtown Iowa City and the main campus on South Clinton Street. The new Hancher Auditorium officially opened its doors to the public on September 9, 2016, while the new Voxman Music Building opened its doors for classes and public visitors on August 22, 2016. The Oakdale Campus, which is home to some of the university's research facilities and the driving simulator, is located north of Interstate 80 in adjacent Coralville. The University established and operates the Pappajohn Center for Higher Education in downtown Des Moines for graduate and continuing business education, and also offers distance learning programs in liberal arts, social work, and strategic communications.

The University of Iowa holds and continues to commission a major collection of public art. The program begun under the Iowa State 'Art in State Buildings Program' one of the first percent for art programs in the United States since repealed in 2017. The collection includes many important works including works by artists: Sol LeWitt (2-3-1-1, 1994); El Anatsui (Anonymous Creature 2009); Dale Chihuly (Forest Amber and Gilded Chandelier, 2004); August Rodin (Jean de Fiennes, draped, 1889); Peter Randall-Page (Ridge and Furrow, 2011).

The University of Iowa is one of the EPA's Green Power Partners, burning oat hulls instead of coal and reducing coal consumption by 20%. In May 2004 the university joined the Chicago Climate Exchange and in April 2009 a student garden was opened. The university also offers a Certificate in Sustainability through the Office of Sustainability (OS). The OS recently coordinated the University's first sustainability plan: "2020 Vision UIowa Sustainability Targets" proposed by UI President Sally Mason on October 29, 2010.

The University of Iowa is regularly recognized as one of the top institutions of higher learning in the country, and over 5,000 courses are offered at the university each year. Iowa is one of 61 elected members to the Association of American Universities. The university is home to ISCABBS, a public bulletin board system that was the world's largest Internet community prior to the commercialization of the world wide web. The Iowa Writers' Workshop was founded in 1936. Since 1947 it has produced thirteen Pulitzer Prize winners. Twenty-five people affiliated with the Writers' Workshop have won a Pulitzer Prize. The Hanson Center for Technical Communication was founded at The University of Iowa and is named after a 1960 graduate, Thomas R. Hanson who has funded the institution with $800,000. The university has educated many of the state's professionals including 79% of Iowa's dentists, 50% of Iowa's physicians, 48% of Iowa's pharmacists, as well as teachers and administrators in each of the state's K–12 school districts. The University of Iowa library system is the state's largest library and comprises the Main Library, the Hardin Library for the Health Sciences, five branch libraries, and the Law Library. The University Libraries' holdings include more than five million bound volumes, more than 200,000 rare books and 1000 historical manuscript collections. Significant holdings include Hardin Library's John Martin Rare Book Room, the Iowa Women's Archives, the Louis Szathmary culinary arts collections, science fiction collections, and works of Walt Whitman. The comic books collection in the Special Collections contains original art for 6,000 cartoons, film and television scripts, zines and other underground or amateur publications, as well as mainstream books, from throughout the 20th and 21st centuries.