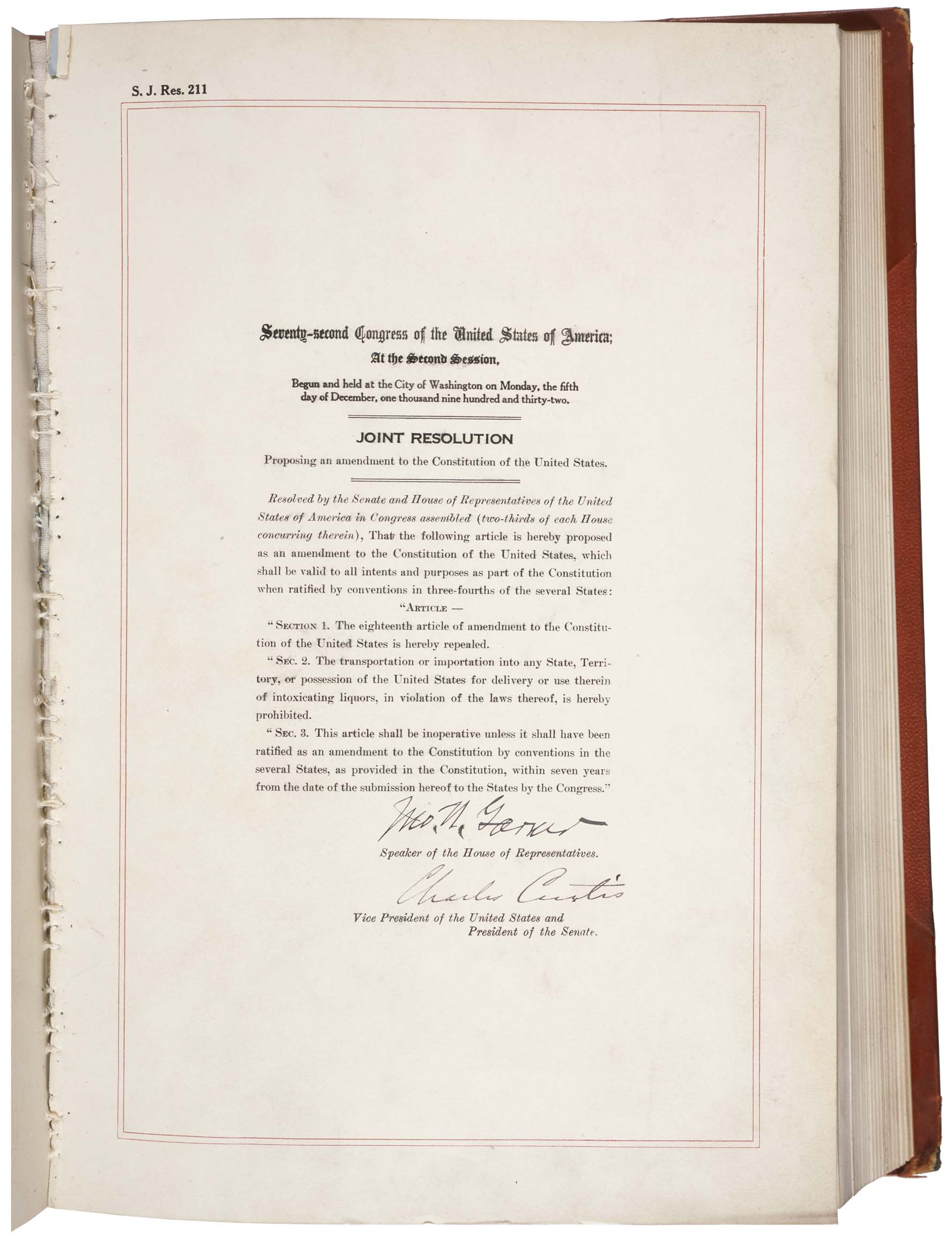 The Twenty-first Amendment (Amendment XXI) to the United States Constitution repealed the Eighteenth Amendment to the United States Constitution, which had mandated nationwide prohibition on alcohol. The Twenty-first Amendment was proposed by the 72nd Congress on February 20, 1933, and was ratified by the requisite number of states on December 5, 1933. It is unique among the 27 amendments of the U.S. Constitution for being the only one to repeal a prior amendment, as well as being the only amendment to have been ratified by state ratifying conventions. The Eighteenth Amendment was ratified on January 16, 1919, the result of years of advocacy by the temperance movement. The subsequent passage of the Volstead Act established federal enforcement of the nationwide prohibition on alcohol. As many Americans continued to drink despite the amendment, Prohibition gave rise to a profitable black market for alcohol, fueling the rise of organized crime. Throughout the 1920s, Americans increasingly came to see Prohibition as unenforceable, and a movement to repeal the Eighteenth Amendment grew until the Twenty-first Amendment was ratified in 1933. Section 1 of the Twenty-first Amendment expressly repeals the Eighteenth Amendment. Section2 bans the importation of alcohol into states and territories that have laws prohibiting the importation or consumption of alcohol. Several states continued to be "dry states" in the years after the repeal of the Eighteenth Amendment, but in 1966 the last dry state (Mississippi) legalized the consumption of alcohol. Nonetheless, several states continue to closely regulate the distribution of alcohol. Many states delegate their power to ban the importation of alcohol to counties and municipalities, and there are numerous dry communities throughout the United States. Section2 has occasionally arisen as an issue in Supreme Court cases that touch on the Commerce Clause.

The Eighteenth Amendment to the Constitution had ushered in a period known as Prohibition, during which the manufacture, distribution, and sale of alcoholic beverages was illegal. Passage of the Eighteenth Amendment in 1919 was the crowning achievement of the temperance movement, but it soon proved highly unpopular. Crime rates soared under Prohibition as gangsters, such as Chicago's Al Capone, became rich from a profitable, often violent, black market for alcohol. The federal government was incapable of stemming the tide: enforcement of the Volstead Act proved to be a nearly impossible task and corruption was rife among law enforcement agencies. In 1932, wealthy industrialist John D. Rockefeller, Jr. stated in a letter: As more and more Americans opposed the Eighteenth Amendment, a political movement grew for its repeal. However, repeal was complicated by grassroots politics. Although the U.S. Constitution provides two methods for ratifying constitutional amendments, only one method had been used up until that time; and that was for ratification by the state legislatures of three-fourths of the states. However, the wisdom of the day was that the lawmakers of many states were either beholden to or simply fearful of the temperance lobby.

The Congress adopted the Blaine Act and proposed the Twenty-first Amendment on February 20, 1933. The proposed amendment was adopted on December 5, 1933. It is the only amendment to have been ratified by state ratifying conventions, specially selected for the purpose. All other amendments have been ratified by state legislatures. It is also the only amendment that was approved for the explicit purpose of repealing a previously existing amendment to the Constitution. The Twenty-first Amendment ending national prohibition also became effective on December 5, 1933. The Acting Secretary of State William Phillips certified the amendment as having been passed by the required three-fourths of the states just 17 minutes after the passage of the amendment by the Utah convention. President Roosevelt then issued a proclamation following the passage and certification of the amendment which stated in part the following: "I trust in the good sense of the American people that they will not bring upon themselves the curse of excessive use of intoxicating liquors to the detriment of health, morals and social integrity. The objective we seek through a national policy is the education of every citizen towards a greater temperance throughout the nation." The end of prohibition was thought to be responsible for the creation of a half million jobs. The various responses of the 48 states is as follows: The following states ratified the amendment: # Michigan: April 10, 1933 # Wisconsin: April 25, 1933 # Rhode Island: May 8, 1933 # Wyoming: May 25, 1933 # New Jersey: June 1, 1933 # Delaware: June 24, 1933 # Indiana: June 26, 1933 # Massachusetts: June 26, 1933 # New York: June 27, 1933 # Illinois: July 10, 1933 # Iowa: July 10, 1933 # Connecticut: July 11, 1933 # New Hampshire: July 11, 1933 # California: July 24, 1933 # West Virginia: July 25, 1933 # Arkansas: August 1, 1933 # Oregon: August 7, 1933 # Alabama: August 8, 1933 # Tennessee: August 11, 1933 # Missouri: August 29, 1933 # Arizona: September 5, 1933 # Nevada: September 5, 1933 # Vermont: September 23, 1933 # Colorado: September 26, 1933 # Washington: October 3, 1933 # Minnesota: October 10, 1933 # Idaho: October 17, 1933 # Maryland: October 18, 1933 # Virginia: October 25, 1933 # New Mexico: November 2, 1933 # Florida: November 14, 1933 # Texas: November 24, 1933 # Kentucky: November 27, 1933 # Ohio: December 5, 1933 # Pennsylvania: December 5, 1933 # Utah: December 5, 1933 Ratification was completed on December 5, 1933. The amendment was subsequently ratified by conventions in the following states: The amendment was rejected by South Carolina on December 4, 1933. On November 7, 1933, voters in North Carolina rejected holding a convention to consider the amendment. The following states took no action to consider the amendment: * Georgia * Kansas * Louisiana * Mississippi * Nebraska * North Dakota * Oklahoma * South Dakota

The second section bans the importation of alcohol in violation of state or territorial law. This has been interpreted to give states essentially absolute control over alcoholic beverages, and many U.S. states still remained "dry" (with state prohibition of alcohol) long after its ratification. Mississippi was the last, remaining dry until 1966; Kansas continued to prohibit public bars until 1987. Many states now delegate the authority over alcohol granted to them by this Amendment to their municipalities or counties (or both).