A tugboat or tug is a marine vessel that manoeuvres other vessels by pushing or pulling them, with direct contact or a tow line. These boats typically tug ships that cannot move well on their own, such as those in crowded harbours or narrow canals, or those that cannot move at all, such as barges, disabled ships, log rafts, or oil platforms. They are powerful and durable for their size. Some are ocean-going, some are icebreakers or salvage tugs. Early models had steam engines, and modern ones have diesel engines. Many have deluge guns, which help in firefighting, especially in harbours.

(1,255 tons, 205 ft) which towed a nuclear depth charge as it was detonated in Operation Wigwam in 1955]] Seagoing tugs (deep-sea tugs or ocean tugboats) fall into four basic categories: #The standard seagoing tug with model bow that tows by way of a wire cable or on a rope hawser. These are known in the industry as "rope boats" or "wire boats." #The "notch tug" can be secured in a notch at the stern of a specially designed barge, effectively making a combination ship. This configuration is dangerous to use with a barge that is "in ballast" (no cargo) or in a head- or following sea. Therefore, "notch tugs" are usually built with a towing winch. With this configuration, the barge being pushed might approach the size of a small ship, with the interaction of the water flow allowing a higher speed with a minimal increase in power required or fuel consumption. #The "integral unit", or "integrated tug and barge" (ITB), comprises specially designed vessels that lock together in such a rigid and strong method as to be certified as such by authorities (classification societies) such as the American Bureau of Shipping, Lloyd's Register of Shipping, Indian Register of Shipping, Det Norske Veritas or several others. These units stay combined under virtually any sea conditions and the tugs usually have poor sea-keeping designs for navigation without their barges attached. Vessels in this category are legally considered to be ships rather than tugboats and barges must be staffed accordingly. These vessels must show navigation lights compliant with those required of ships rather than those required of tugboats and vessels undertow. #"Articulated tug and barge" (ATB) units also utilize mechanical means to connect to their barges. The tug slips into a notch in the stern and is attached by a hinged connection, becoming an articulated vehicle. ATBs generally utilize Intercon and Bludworth connecting systems. ATBs are generally staffed as a large tugboat, with between seven and nine crew members. The typical American ATB displays navigational lights of a towing vessel pushing ahead, as described in the 1972 ColRegs.

Compared to seagoing tugboats, harbour tugboats are generally smaller and their width-to-length ratio is often higher, due to the need for a lower draught. In smaller harbours these are often also termed ''lunch bucket boats'', because they are only manned when needed and only at a minimum (captain and deckhand), thus the crew will bring their own lunch with them. The number of tugboats in a harbour varies with the harbour infrastructure and the types of tugboats. Things to take into consideration include ships with/without bow thrusters and forces like wind, current and waves and types of ship (e.g. in some countries there is a requirement for certain numbers and sizes of tugboats for port operations with gas tankers).

River tugs are also referred to as towboats or pushboats. Their hull designs would make open ocean operations dangerous. River tugs usually do not have any significant hawser or winch. Their hulls feature a flat front or bow to line up with the rectangular stern of the barge, often with large pushing knees.

The first tug boat, ''Charlotte Dundas'', was built by William Symington in 1801. She had a steam engine and paddle wheels and was used on rivers in Scotland. Paddle tugs proliferated thereafter and were a common sight for a century. In the 1870s schooner hulls were converted to screw tugs. Compound steam engines and scotch boilers provided 300 Indicated Horse Power. Steam tugs were put to use in every harbour of the world towing and ship berthing. Tugboat diesel engines typically produce 500 to 2,500 kW (~ 680 to 3,400 hp), but larger boats (used in deep waters) can have power ratings up to 20,000 kW (~ 27,200 hp). Tugboats usually have an extreme power:tonnage-ratio; normal cargo and passenger ships have a P:T-ratio (in kW:GRT) of 0.35 to 1.20, whereas large tugs typically are 2.20 to 4.50 and small harbour-tugs 4.0 to 9.5. The engines are often the same as those used in railroad locomotives, but typically drive the propeller mechanically instead of converting the engine output to power electric motors, as is common for diesel-electric locomotives. For safety, tugboat engines often feature two of each critical part for redundancy. A tugboat is typically rated by its engine's power output and its overall bollard pull. The largest commercial harbour tugboats in the 2000s–2010s, used for towing container ships or similar, had around of bollard pull, which is described as above "normal" tugboats. thumb|left|Diagram of components Tugboats are highly manoeuvrable, and various propulsion systems have been developed to increase manoeuvrability and increase safety. The earliest tugs were fitted with paddle wheels, but these were soon replaced by propeller-driven tugs. Kort nozzles (see below) have been added to increase thrust per kW/hp. This was followed by the nozzle-rudder, which omitted the need for a conventional rudder. The cycloidal propeller (see below) was developed prior to World War II and was occasionally used in tugs because of its maneuverability. After World War II it was also linked to safety due to the development of the Voith Water Tractor, a tugboat configuration that could not be pulled over by its tow. In the late 1950s, the Z-drive or (azimuth thruster) was developed. Although sometimes referred to as the Aquamaster or Schottel system, many brands exist: Steerprop, Wärtsilä, Berg Propulsion, etc. These propulsion systems are used on tugboats designed for tasks such as ship docking and marine construction. Conventional propeller/rudder configurations are more efficient for port-to-port towing.

The cycloidal propeller is a circular plate mounted on the underside of the hull, rotating around a vertical axis with a circular array of vertical blades (in the shape of hydrofoils) that protrude out of the bottom of the ship. Each blade can rotate itself around a vertical axis. The internal mechanism changes the angle of attack of the blades in sync with the rotation of the plate, so that each blade can provide thrust in any direction, similar to the collective pitch control and cyclic in a helicopter. 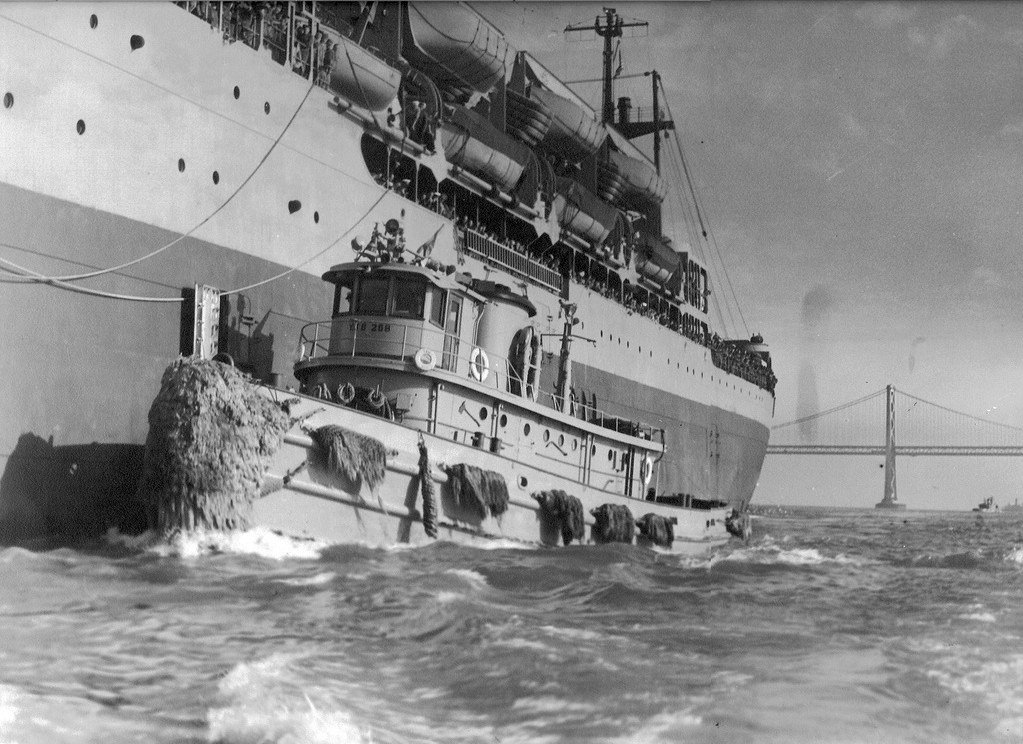 Tugboat fenders are made of high-abrasion-resistance rubber with good resilience properties. They are very popular with small port craft owners and tug owners. These fenders are compression moulded in high-pressure thermic-fluid-heated moulds and have excellent seawater resistance. Tugboat fenders are also called beards or bow pudding. In the past they were made of rope for padding to protect the bow. Types of tugboat fender include Tug cylindrical fender, W fender, M fender, D fender, and others.

Vintage tugboat races have been held annually in Olympia, Washington since 1974 during the Olympia Harbor Days Maritime Festival. Tugboat races are held annually on Elliott Bay in Seattle, on the Hudson River at the New York Tugboat Race, the Detroit River, and the Great Tugboat Race and Parade on the St. Mary's River.

Since 1980, an annual tugboat ballet has been held in Hamburg harbour on the occasion of the festival commemorating the anniversary of the establishment of a port in Hamburg. On a weekend in May, eight tugboats perform choreographed movements for about an hour to the tunes of waltz and other sorts of dance music.

The Tugboat Roundup is a gathering of tugboats and other vessels in celebration of maritime industry. The Waterford Tugboat Roundup It is held in the late summer at the confluence of the Hudson and Mohawk Rivers in Waterford, New York. The tugs featured are river tugs and other tugs re-purposed to serve on the New York State Canal System.

To date, there have been four children's shows revolving around anthropomorphic tugboats. * In the late 1980s, 13 episodes were made of ''TUGS'', a series depicting the life of tugboats in the 1920s. * An American adaptation using edited footage from ''Tugs'' followed: ''Salty's Lighthouse''. * In the 1975's Soviet short animation musical film ''В порту/ In the sea port'' a tugboat sang a song: "Through a harbour area" * One of the creators of ''Tugs'' went on to direct ''Theodore Tugboat''. * Animated preschool series ''Toot the Tiny Tugboat'' started broadcasting on Channel 5 ''Milkshake!'' in 2014 and on Cartoonito in 2015, with a Welsh-language version airing on S4C Cyw. "Tugger" is a tugboat in the animated series ''South Park''. He appears in the episode "The New Terrance and Phillip Movie Trailer" as a sidekick for Russell Crowe in a fictitious television series entitled ''Fightin' Round The World with Russell Crowe''. Tugger follows Crowe as he engages various people in physical conflicts, providing emotional support and comic relief. At one point Tugger even attempts to commit suicide, upon being forced to hear Russell Crowe's new musical composition.

(Alphabetical by author) *The children's book ''Scuffy the Tugboat'', written by Gertrude Crampton and illustrated by Tibor Gergely and first published in 1946 as part of the Little Golden Books series, follows the adventures of a young toy tugboat who seeks a life beyond the confines of a tub inside his owner's toy store. *The Dutch writer Jan de Hartog wrote numerous nautical novels, first in Dutch, then in English. **The novel ''Hollands Glorie'', written prior to World War II, was made into a Dutch miniseries in 1978 and concerned the dangers faced by the crews of Dutch salvage tugs. **The novella ''Stella'', concerning the dangers faced by the captains of rescue tugs in the English Channel during World War II, was made into a film entitled ''The Key'' in 1958. **The novel ''The Captain'' (1967), about the captain of a rescue tug during a Murmansk Convoy, sold over a million copies. **Its 1986 sequel, ''The Commodore'', features the narrator captaining a fleet of tugs in peace-time. *''Little Toot'' (1939), written and illustrated by Hardie Gramatky, is a children's story of an anthropomorphic tugboat child, who wants to help tow ships in a harbour near Hoboken. He's rejected by the tugboat community and dejectedly drifts out to sea, where he accidentally discovers a shipwrecked liner and a chance to prove his worth. This story was animated as part of the Disney movie Melody Time. *Farley Mowat's book ''The Grey Seas Under'' tells the tale of a legendary North Atlantic salvage tug, the ''Foundation Franklin''. He later wrote ''The Serpent's Coil'', which also deals with salvage tugs in the North Atlantic.


A site for boatmen.